Rate this article "How to build an empire - A beginner's guide"

How to build an empire - A beginner's guide

So you want to build an empire, huh? You recently downloaded Final Fantasy XV: A New Empire and want to know more about the game mechanics and how to optimise your time and resources. That's very relatable. Having played the game for more than just a few months, here are some advice that you can learn to improve your experience (and hasten your progress towards any particular goals you might have in mind).

So first things first, a bit of background information about the game. The game is a multiplayer "city builder" game based on the theme of Final Fantasy XV. For the benefit of those who have not played such a game before, such games involve the construction and upgrading of infrastructure to improve the function of your empire: increasing the rate at which you can harvest resources, improving the defense capabilities of your empire, giving you access to better tier troops to overwhelm other players' defenses, among many other benefits. Usually such games involve resource gathering, construction, research, military troops, defenses, hero capabilities and guilds. The aim of the game would be to build up a powerful empire so that you can go off on conquests to exert your virtual dominance over other weaker empires, making you feel good about yourself.

Now for the rest of you who have played similar games in the past, such as the highly popular "Lords Mobile" or maybe even the classic "Backyard Monsters", you may wonder what makes this game different from the rest. Well, where other such "city builder" games usually have time as a limiting factor, in Final Fantasy XV: A New Empire resources as the main limiting factor as compared to time. You can get all the boosts in the world, but still not enough stone to start building that god-forsaken building in the first place.

Resources in this game are split into: stone, energy, metal, food and the in-game currency, gold. Usually, when you are starting the game and building up your infrastructure, stone is usually depleted first. As you build more powerful buildings, metal starts to become depleted. Energy is usually consumed in large amounts when you are performing research. You would normally have no issue with food unless you amass an army that puts Alexander the Great to shame. The main saving grace of this game is that gold is actually rather easy obtainable as compared to some other games and this will be elaborated further later in the article.

Now comes the part you were waiting for. How exactly can you overcome this limitation of resources?

1. Visit the chest every few minutes
If you noticed, at the bottom left of the screen there is a chest icon. You can tap the chest to receive a random resource every few seconds to minutes (the cooldown is indicated below the chest). The resources can range anywhere from a miserable few hundred to something in the tens of thousands. The chest also occasionally drops gold and power ups like "speed boost" or "marching speed". Opening the chest often is a great way to receive resources. 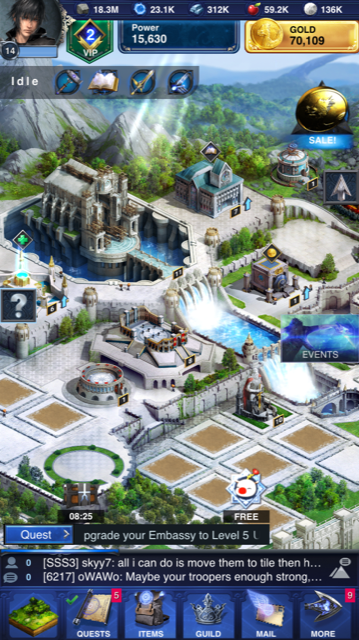 2. Prioritize construction of production buildings
Do not rush to upgrade your citadels, libraries and whatnot. You should focus on building up your production capabilities. Rushing a higher level citadel will of course save you time in the short run (up to maybe level 7 or 8?) but in the long run you will lose more time as you find yourself constrained by resources. If you do not have enough stone, you will not be able to even start building majority of the buildings. Building and upgrading production buildings will let you have a more consistent progress in the longer term.

If you noticed in my profile below, I have built a number of quarries (for stone) and mines (for metal). I recommend prioritising buildings in the order of quarries, mines, extractor and farms respectively. Food is the least useful unless you plan on building up a big army. Stone and metal are the most important for construction hence you should build more of those production buildings and upgrade them first. 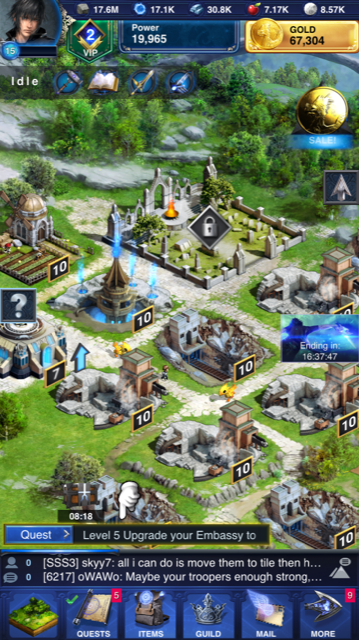 3. Do hero quests
Hero quests give quite a fair bit of resources once they are completed. You can start hero quests in the menu (as shown below) and they will auto complete after a certain time limit. The resources given are usually at least a few thousand of every resource, with quests of higher rarity giving even more resources. The quest list resets every 6 hours so it would be great to complete all the quests before that to gain as much resources as possible. You can also do guild quests and VIP quests for bonus resources and gold respectively. 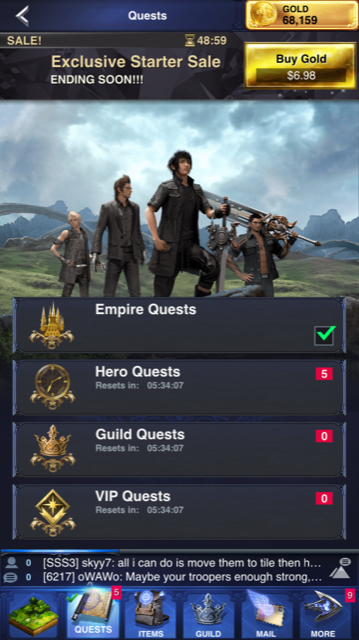 4. Hunt monsters
Monsters appear throughout the map and you are able to attack them using your hero. Each attack would drain stamina from your hero, which would take up to a few hours to completely restore, but the loot from attacking monsters are usually very generous. They can range from gold to large amounts of resources. The higher the level of monsters, the higher the rewards you earn from attacking them. What's more, hero stamina resets upon leveling up. So do not be too eager to consume all your +10kXP bonuses. It would be optimal to attack the monsters until the hero's stamina is depleted, consume the XP bonuses to let the hero level up to restore stamina and repeat. Doing this in the early phase of the game will net you a comfortable amount of resources to start jump-starting your production buildings. 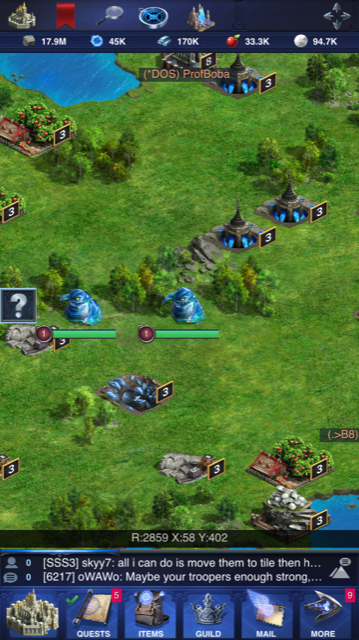 5. Gathering resources
While we are looking at the monsters on the world map, you might also notice resource caches lying around in the above pictures. Such resources caches may be occupied by your army where they will gather resources and return to your empire automatically when they are done. The standard rate is usually a few thousand of the resource (less than 10 thousand) over up to 5 hours, depending on the size of your army and your research level for resource gathering and carrying capacity. While that may seem a small amount for such a long period of time, it is better than nothing. If your army is idling around and consuming your food, you might as well put them to use gathering resources while you are not tending to your empire. However, do note that this may leave your empire wide open for a surprise visit by fellow conquerors.

6. Gold
Who doesn't love gold? It not only lets you purchase resources directly, it also allows you to instantly upgrade buildings, purchase power ups, instantly restore stamina and makes you feel rich, among many other things. Now, gold is a precious resource and you are given around 800 gold at the start of the game. The most obvious way of earning gold, as shown by the game, is by using the gold vault system, where you deposit a certain amount of gold (maximum of 100 gold if you are a non-paying user) and you are given 10% of the deposited gold (10 gold if you deposited 100) as interest after 2 hours, along with the initial amount. 10 gold every 2 hours sounds very disheartening, does it not?

However, fret not! There are in fact many other ways to earn gold rather quickly. If you notice in my above pictures of my profile, my gold stands somewhere between 68k-70k gold. "Oh my god! You are either a paying user or hacking," you might think. In fact it is quite doable to amass so much gold considering I spent quite a number of months in the game.

You can earn them by completing events, the easiest which is usually "upgrade your citadel" which keeps repeating if you do not manage to complete it. So you can hang on to your citadel upgrade until you notice this event appearing. Events usually have 3 tiers, which are progressively harder to attain, with the exception of the "upgrade your citadel" event which propels you all the way to tier 3 upon completion. You are usually given up to a few hundred gold for your efforts in the event. What's more, if you obtained a higher score than average, you have a chance of receiving bonus gold, from 1000 gold for achieving first place (very doable sometimes) to 50 gold for achieving 50th place.

Attacking monsters also occasionally nets you gold. Rarer monsters or high level monsters usually give you more gold. Resource gathering also gives you an average of 300 gold upon full completion. In fact, if you split up your forces and send them to multiple resource caches, the chance of receiving a higher amount of gold overall increases. You can also always directly gather gold from a gold cache (which is extremely rare and requires a large enough army).

With your newfound gold, you can use it to instantly upgrade buildings (which are expensive) or even purchase resources (which in my opinion is a better overall use of gold).

If you scrolled too quickly and missed whatever this article is saying above, it basically amounts to "prioritise resource production and gathering as resources will be your main limitation in this game, as compared to time". Other things you can consider include research, to boost production and resource gathering speed. On a side note, researching advanced tier troops and traps (and subsequently making them) is also the best way to build up power level quickly (for those of you interested). Whether you are a casual player or a competitive one, I do hope that this guide helps all you aspiring lords and improves your experience for Final Fantasy: A New Empire.

Rate this article How to build an empire - A beginner's guide

PLEASE NOTE: This offer is available just for NEW users!Build your own city in the Final Fantasy XV universe. Experience a whole new adventure on your phone!Join your favourite characters from FFXV and build your empire by collecting valuable resources, creating the army you will elaborate some cool strategies with and take part...