Hey there, readers! I hope you’re doing fine. Ranzacado welcomes you to the 8th entry of the Ranzacking Reviews Series. Today we’ll be checking out  “Evoland”! This one might not be for everybody, but for us retro-game lovers it’s a delightful treat. Before we go any deeper, here are some details:

The article will be split into sections: Gameplay, Controls, Graphics & Sound (renaming it to sound so I can talk about SFX too)and My Personal Thoughts. Without further ado, hold on to your pixels and polygons and let’s get straight into it!

[DISCLAIMER: The pictures used in this article are not owned nor created by me. Rights go to their respective authors.]
[I apologize in advance if I used too many pictures!]

Developed and published by Shiro Games and released on Steam on April 4th, 2013; and later released on mobile by Playdigius, Evoland (the subtitle in the next picture is not actually part of the name) was originally a project developed by Nicolas Cannasse during the 24th Ludum Dare (a video game development competition) held in August 2012, in which “Evolution” was the theme of the competition and, unsurprisingly, the project won. The game is practically a love-letter to action/adventure video games and almost plays as a traditional RPGs.

Let’s analyze how the different aspects of this tribute affect the quality of the overall product: 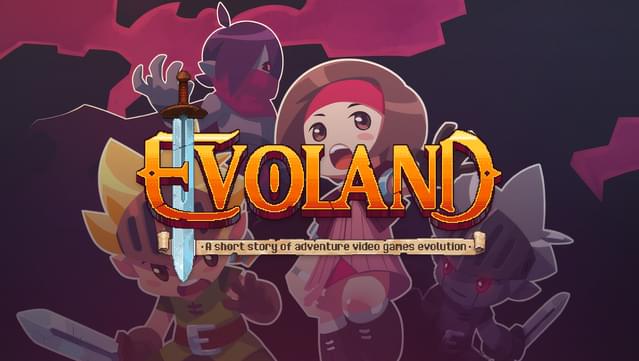 Let me start with this: EVERYTHING in this game goes hand-in-hand with the game’s concept of “Evolution”. In general, the game is pretty captivating although pretty short; it can be completed in 30 minutes or so. In terms of story, it’s kind of dumb (?) but it does the job pretty correctly (you’ll notice pretty quickly that there are a lot of references to other games and some pop media too). I wouldn’t say it’s lackluster but it’s not the greatest either, so don’t worry if you lose track of what’s happening. Anyways, I’ll try not to spoil anything.

As I stated in the intro, you’ll start off from the very beginning of the process: monochrome pixels. At first, it plays out as kind of a Zelda-like game: defeating monsters with your sword, opening chests and whatnot. Once you enter the overworld (kind of like Zelda 2), you’ll start getting random encounters, like those of Final Fantasy (I know, it’s pretty annoying). Along the way, you’ll unlock various features such as 16-bit colors, music, sound effects, MODE-7 (that’s for the world map, like in Final Fantasy) and some other features that come included in your usual game.

For the most part, the game will play out as this Zelda / Final Fantasy mixture. That is until you get to a Diablo-esque sequence: hacking and  slashing various enemies, looting their corpses and acquiring equipment that’ll aid you throughout the stage. This is the most action-packed part of the game, and  sadly there’s only one in the whole game; enjoy it while you can as it is pretty fun.

All in all, the gameplay is pretty straight forward, if you know the game being referenced in each sequence. The only thing I can complain about is that everything must be “unlocked” first, since you start with ONLY the ability to move right. Everything after that, you gotta play the game to get it. 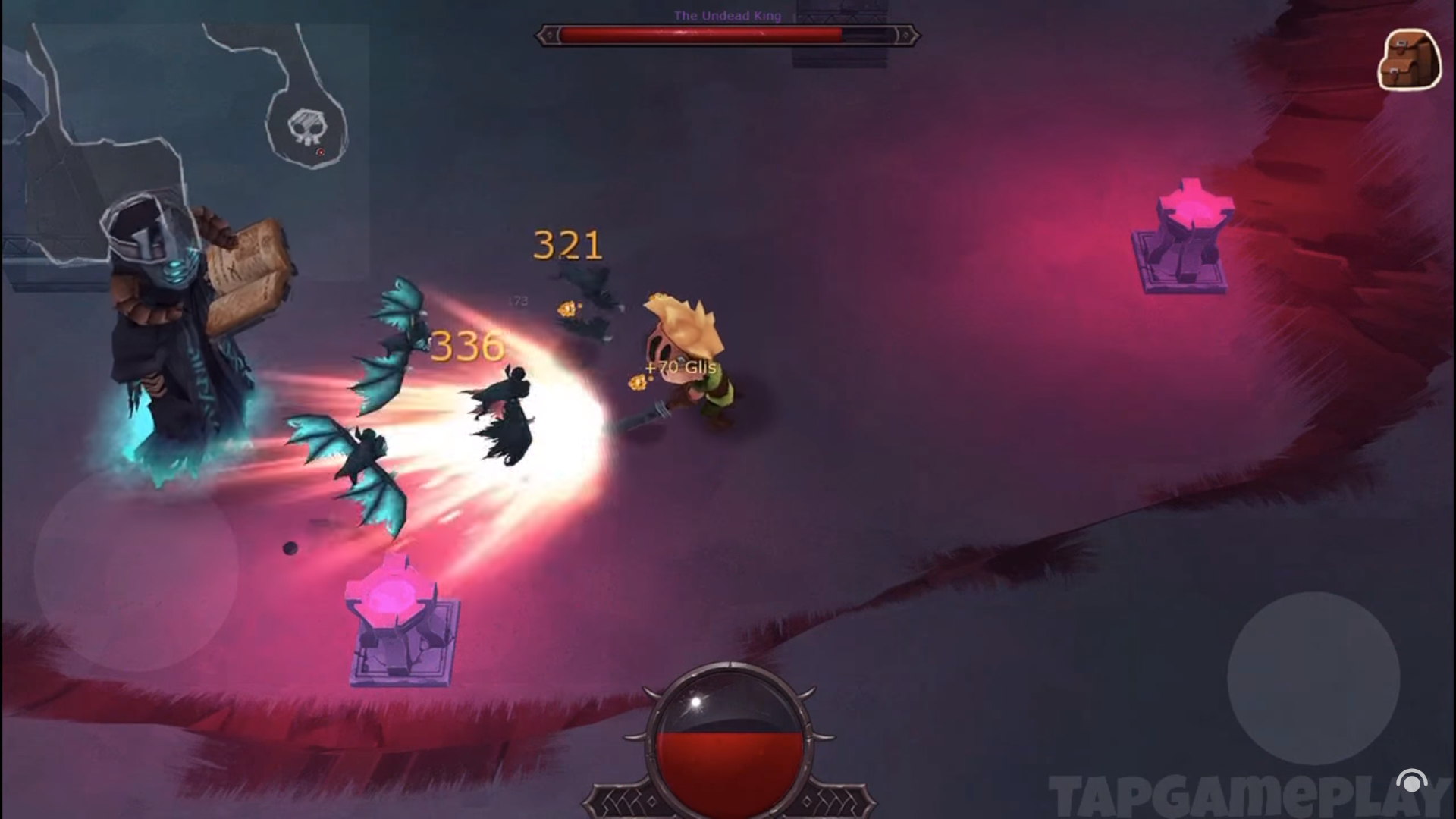 Throughout the game, you’ll also find collectibles: Stars and Cards. Cards are used in a mini-game called Double Twin (which is totally optional), each card represents either a playable character or an enemy in the game. Stars, on the other hand, have no purpose whatsoever other than fulfilling the corresponding achievements, so… If you didn’t come here for the 100%, then you can safely ignore them.

[ranzacado says: every important unlock comes with a side-dish of Achievements (in any supported platform). All of them can be earned just by playing the story aside from the collectible ones.] 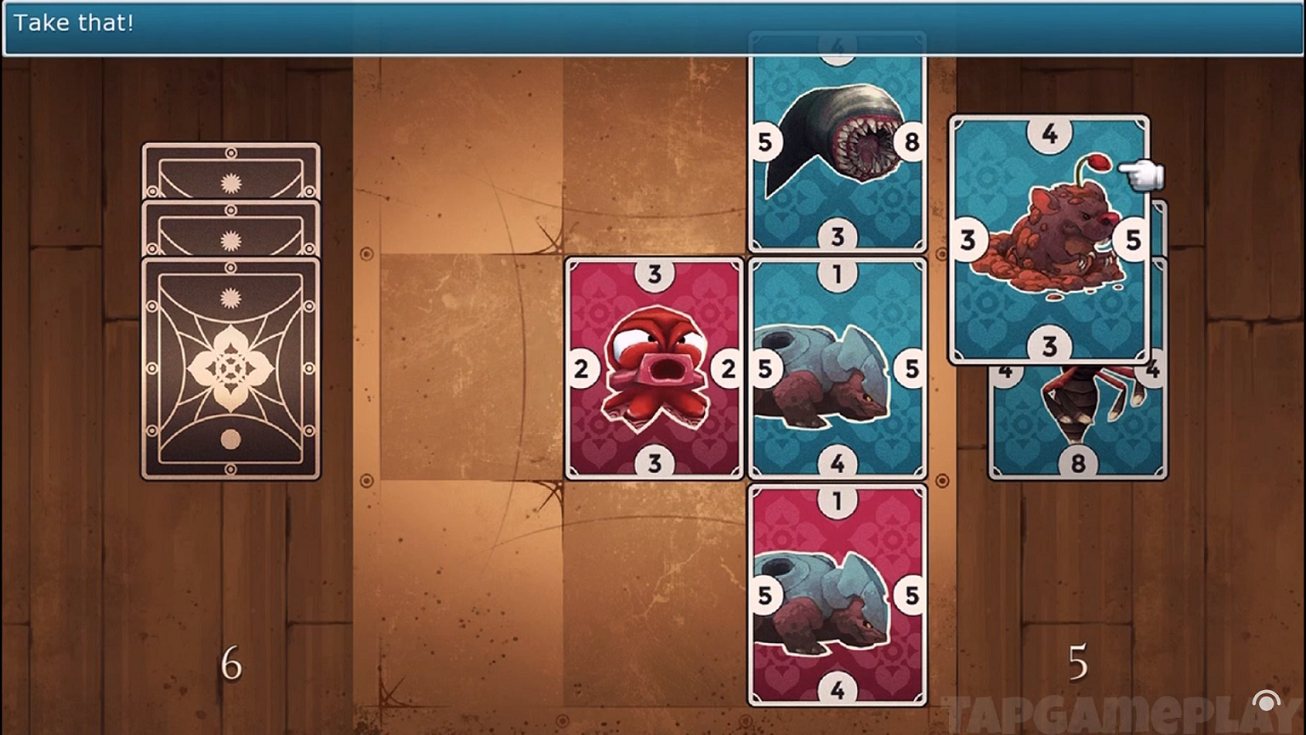 [Blue: your cards - Red: enemy cards. Every card has numbers on its sides. When you play a card beside an enemy card and the card has a higher number on that side than the enemy card, the card turns yours and vice versa. You win when the board is filled with your cards.]

There’s nothing much to add from what I explained earlier on the last section. Just as a little reminder, we’re talking about the PC version (although some pictures are from the mobile port).

The Zelda-esque and Diablo-esque play pretty much the same: you run around with [W,A,S,D], attack and interact with objects with [Space] (in the action sequence you can chain up combos… after unlocking them). The start can be kind of infuriating since you die in one hit until you unlock the heart containers, but after that the game’s a breeze.

In the case of Turn-based battles, well… you can’t miss on this, right? You just gotta select what you want to do, and select the objective you want to cast that action to. Seriously, it’s THAT simple. Since everything depends on the evolution of the game, we have different kinds of arts packed in this little game. Downright from the start, the pixel art is pretty iconic and nostalgic. I’m eager to say that the pixel art is more complex than what was capable the hardware from back then. Still, it looks really pretty so I’m not complaining; especially once you unlock the 256 Colors Display and upgrade your character to it’s “Big” version.

Next, once you unlock the 3D graphics, the quirky pixel art-style translates really well into the polygon version (and I must admit that I liked the pixelated textures). In this case, the world map and the Zelda levels are pretty ‘meh’ (and in some places you even get downgraded to 2D again) but the Turn based combat looks glorious, I must admit. Additionally, there’s a town in the game where Pre-rendered backgrounds are used (much like Final Fantasy 7) and they look reeeeally good (pictured below). 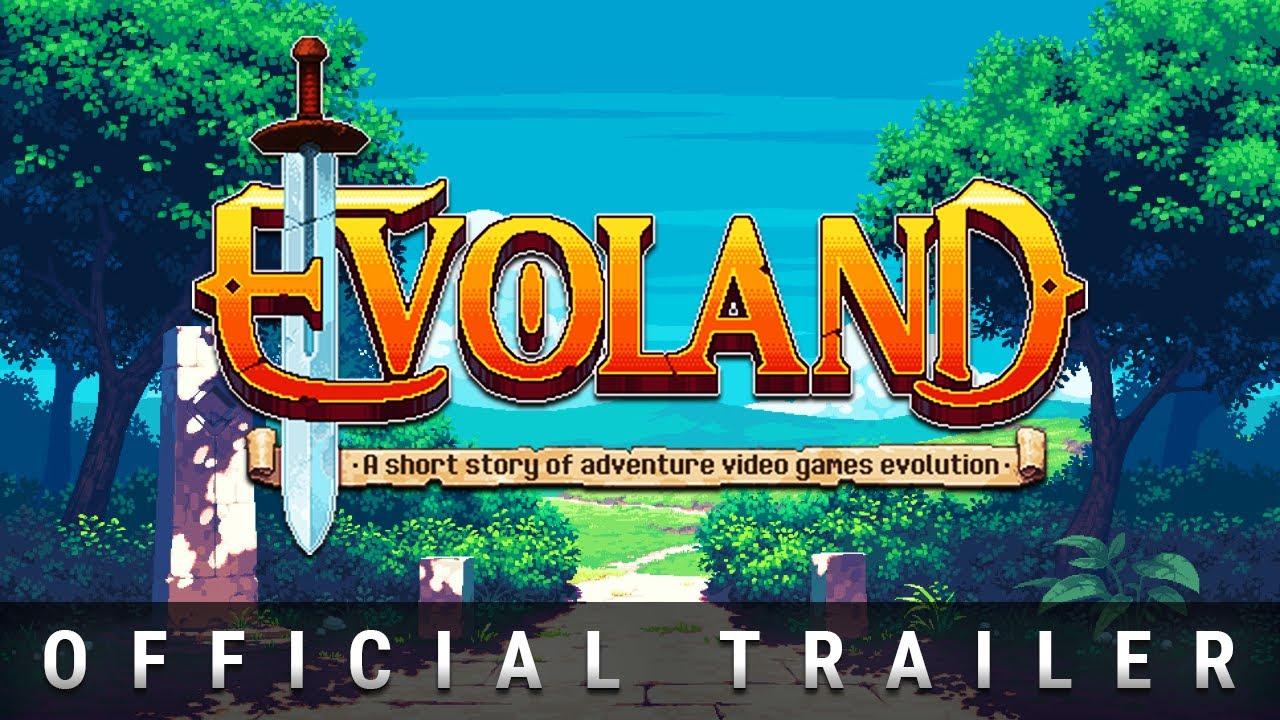 Now, in the music department I must admit that they’ve done a good job, although there’s nothing much in the game. The 8-bit and 16-bit music is really spot on, and the other pieces are really captivating, I could even say memorable. My personal favorite track is the Title Screen one, since it feels like the most nostalgic of the game.

Sound effects and Visual effects are… pretty generic overall. The ambient light is pretty nice… once you unlock it though.

[ranzacado says: I could swear that the noises made by the bosses are the same screech from Rek’Sai, from League of Legends… but the game was out BEFORE the champion was released… I’m confused.]

Well, I’m not gonna lie: I LOVE retro games, pixel art and chiptune. I adore it. And well, I love games, too. Having an all-gaming-eras tribute was like a dream come true for me. I discovered it on a Steam Sale some years ago and got it on the spot; I couldn’t bear not having this game. Sadly, as I said some sections ago,, the game falls kinda short in terms of content and I completed the game (100%) in 6 hours. Yeah, what a long game right?

Honestly, the price is kind of steep but I believe you’re paying what you get. It may be kinda short if you just bolt through the story. Sincerely, I wouldn’t recommend it for people who don’t like retro games; this game is pretty niché in its own quirky way. Anyways, with nothing else to add, let us wrap it up!


Here’s the Steam page of the game: https://store.steampowered.com/app/233470/Evoland/

AND you can actually play Evoland Classic for free here: http://evoland.shirogames.com/classic (it’s basically a demo of the game)

And If you enjoyed this game, I encourage you to check out any other of Shiro Games titles! Haven’t played them myself but if this one was a little masterpiece of its own, I don’t doubt there’s something else you’ll like. There’s a sequel to this game too, so I’m gonna cover it on an upcoming article. Stay tuned!

Well, this has been ranzacado and, as always, thanks for tuning in and hope I see you on the next article!

Check out my other Ranzacking Reviews!:

Thank you all for the feedback!

@fomi is not that I don't like the 2D, but turn-based 3D looks gorgeous, IMO

@son_soda apologies for that! I usually go too in-depth with my reviews, but I tend to write too much. Hope you liked it though!

As always, you can always check out my other reviews if you liked this one!