Welcome, my dear hag-companions, to the 4th entry of Ranzacking Reviews! If you don’t know me by now, this is your host ranzacado serving you another plate of fresh games that I enjoy and I hope you will (or have) too! Thanks for the feedback on the previous article, it’s always appreciated! You can check out my other reviews at the end of the article. Also, as I said before, I’ll keep these introductions brief from now on, so let’s start.

Today I’ll be covering the game “Savant: Ascent”. This one’s pretty fun to play or just leaving it open to listen to the soundtrack. If you haven’t heard of it, here’s some details:

As per usual, the article’s gonna be divided into Gameplay, Controls, Graphics & Music and My Personal Thoughts; feel free to examine the article or just take a glance. So, without further ado, let’s climb into it!

Developed by D-Pad Studios (developers of Owlboy) along with the musician Savant (Aleksander Vinter) and released on Steam in December 4th, 2013, Savant: Ascent is basically some type of bullet-hell shooter that goes in sync with the music, which is in fact, taken from various Savant albums. The concept is pretty simple, as is with bullet-hells: shoot the enemies, but don’t get shot. The game is pretty enjoyable by the sheer fact that the soundtrack is awesome, but let’s see how the rest of the parts work along with it. You’ll decide if you wanna try it or not.

As I said, it’s an action bullet-hell-type shooter, only that you’re not constantly moving along the screen. You stand on 2 points in the middle of the screen and enemies will start appearing around you on the screen: left, right, above, below, everywhere; and you’ll try to make your way to the top of the tower (when playing story mode) or just achieve the highest score (in endless mode).

There’s a wide variety of enemies, the most basic and common being Fodders: the grey-and-green orbs that, after a while, will attempt to tackle you. Most enemies behave the same (they move in pace with the music), they just differ in their moving patterns except for one type: Wyrms, the big worms that go around the screen kinda slowly but are pretty obnoxious when they get close, especially when in big numbers. 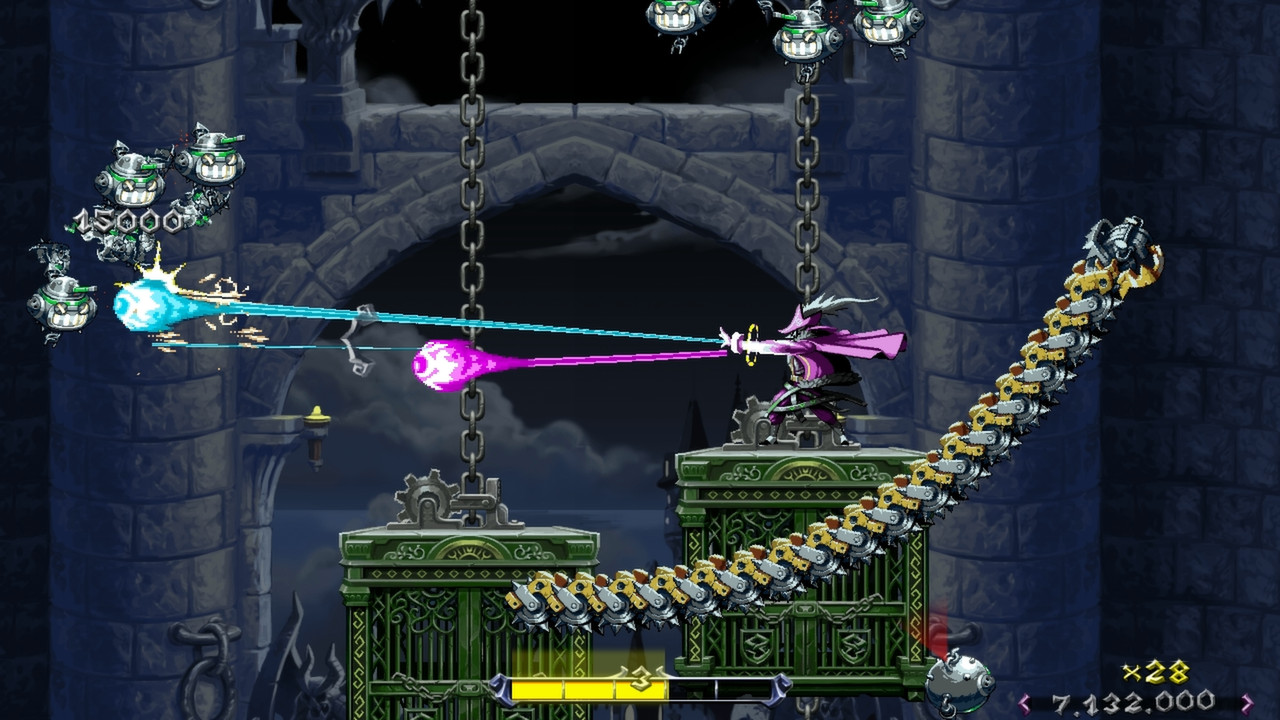 Sometimes, Golden Fodders will appear. That’s a crucial part of the game because, when you kill them, they drop a CD piece. Four of this pieces form a CD, which will unlock a  power-up and a new song to kill machines with. There are around 6 soundtracks in total and they can only be obtained in order and in different gamemodes. For example, the first power-up is the song Kali 47, which unlocks the Charge Meter: once loaded will shoot a burst of missiles that deal massive damage. Each power-up gives you a massive advantage for future runs, so be sure to collect all CDs!

[ranzacado says: one thing to note: golden pieces mean progress on a CD, green pieces just give you score. Prioritize golden pieces for that juicy music!]

As I said before, there’s the Story Mode and the Endless Mode. The Story mode has 3 stages, while the Endless Mode is just the 2nd stage of the story mode (getting harder with each horde of enemies). You can unlock CDs in both modes and even unlock a new way to play: Vario Mode. Moreover, doing a specific thing will unlock a Boss Fight. No spoilers though, find out yourself ;^) 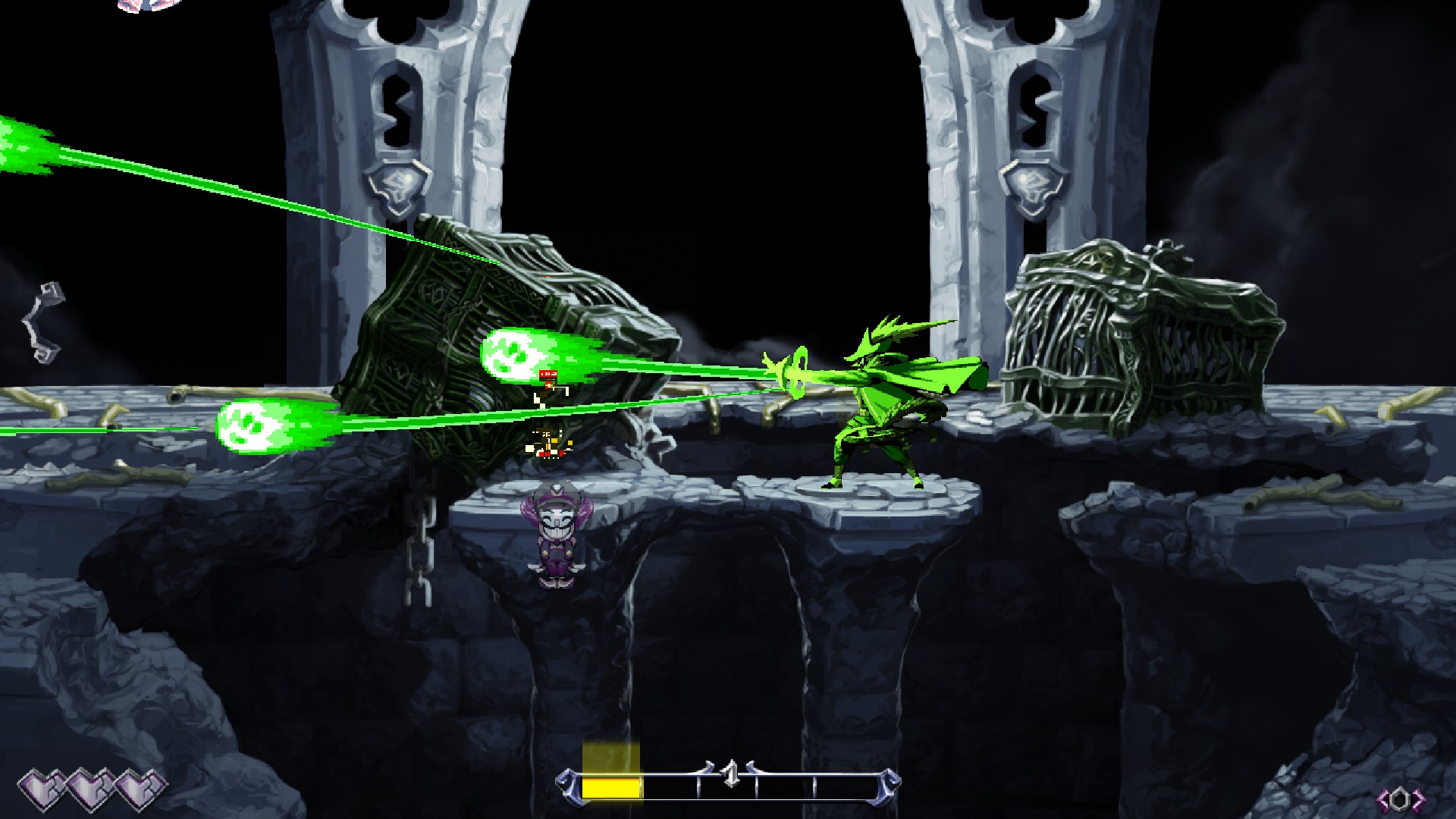 [This screenshot is actually mine, I stopped writing and played for a bit to get more inspiration.]

The controls are fairly simple: move between platforms with A,W & D buttons. With a power up, you’ll need to use the S button. Shoot with right-click and use the special burst with left-click. As I said, it’s fairly straightforward.

There’s a bit of a delay when starting to shoot, but it’s satisfactory. The fact that the screen pans out to where the reticle is pointing is pretty helpful too. Dodging is kinda hard at first (it’s kinda weird at first trying to move) but with experience you’ll do it with ease. The most difficult thing about this game is when you’re surrounded with lots of enemies, but as I said, with experience you’ll learn how to deal with it. 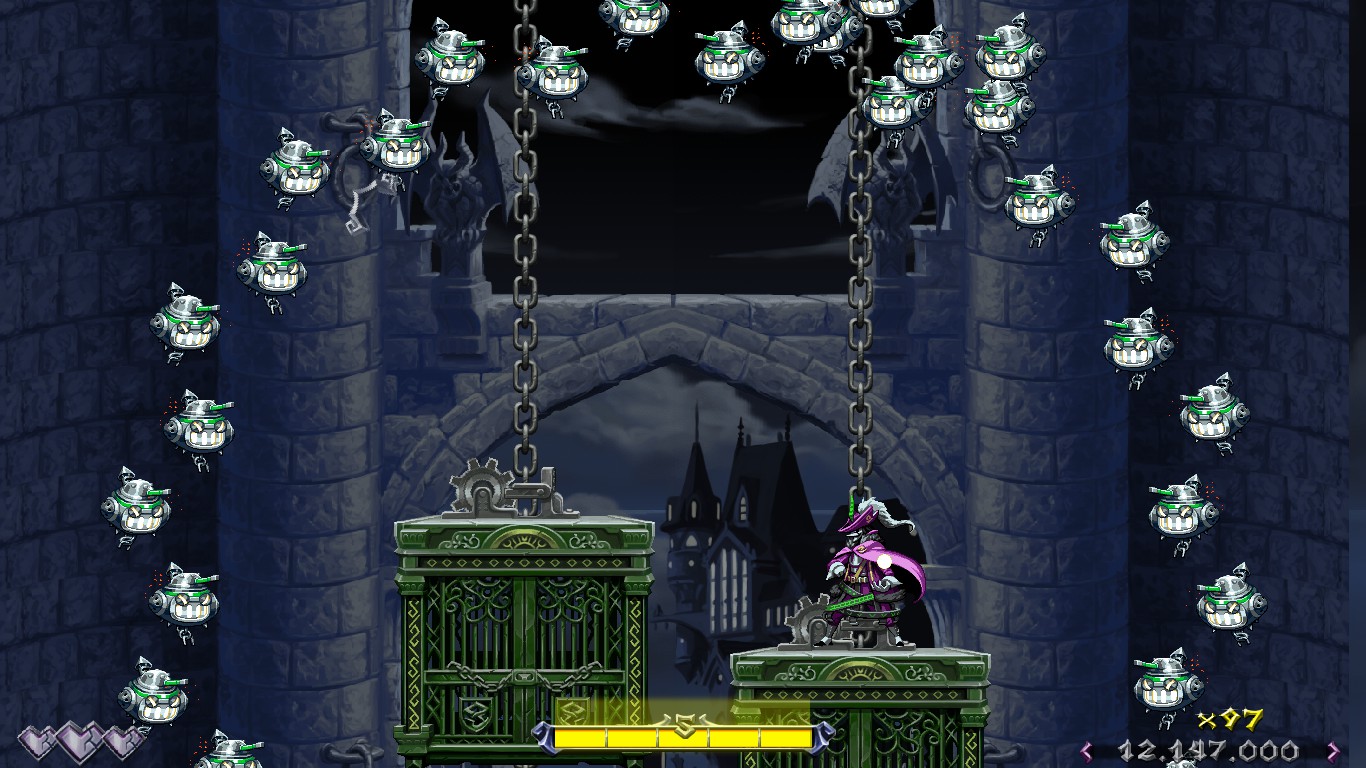 Well, the graphics are really pretty. General sprites are a crisp kind of high-resolution pixel art, while backgrounds are more on the smoother side. Platforms and enemies stand out against the backgrounds, so you ain’t missing them. Also, there’s a visual cue that points whenever an enemy appears. The only downside with it is that there are a lot, and I mean A LOT, of flashing lights, but that can be disabled so please go to configurations first if you suffer anything that can be affected by that.

Now, for music, well.. as I said at the start, the soundtrack is made by the artist Savant. Most of the songs are from various albums of his, but there are some original to the game. Is immersive and memorable, and there’s something for every taste! While the songs are kind-of dubstep style, they’re all a different style. Downside is there’s just 6 tracks, but you can just switch the song in the pause menu whenever you like.

[ranzacado says: my favorite tracks are Melody Circus and ISM, they pump me up really much.]

The game’s pretty hectic and fast-paced action, which I love pretty much. I knew the artist beforehand, so listening to these songs on a good game was a really nice surprise. It’s kinda short though, but since it only costs $2.99 (I got it in a bundle, though) you’re paying what you get. Although simple, at least is a complete game. I don't think I can say any more about the game, so Imma wrap it up now.

Here’s the Steam page of the game for you to check it out: https://store.steampowered.com/app/259530/Savant__Ascent/

And if you like chiptune, dubstep, or electronic music, I highly suggest you check out https://savantofficial.bandcamp.com/ for more Savant music! He’s a really diverse artist and I believe he has something for all tastes. My favorite album is Protos, the one that the Void Update is based on, but I really enjoy most of his music!

And well, this has been ranzacado. Thank you for reading and hope I’ll see you on the next article! 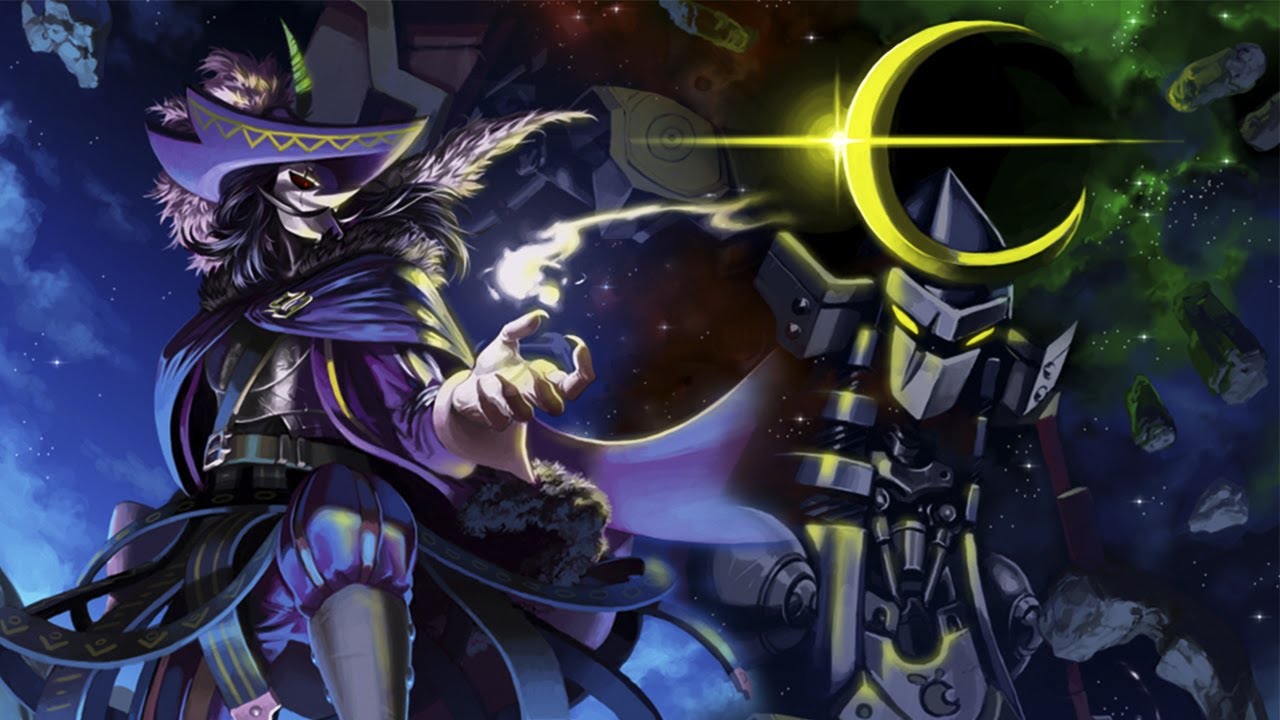 Check out my other reviews:

Not bad but needs a lot of improvement. Good work though :)

Thank you all for the feedback!

I enjoyed the article .Good luck in all your endeavors!!

Nice work
Nothing to complain about keep going and improving

really not bad) 5 from me