[EDIT: I've been trying for so long to this article to reach to you guys. I've submitted this article at least 3 or 4 times. Hope this time it reaches and you enjoy the reading!]

Hello there, wizards and witches, and welcome to another edition of Ranzacking Reviews! This is yours truly, ranzacado, once more. I hope you’ve enjoyed my last article (some said it was… delicious) about the game Cook, Serve, Delicious! and hope you’re ready for some more. If you haven’t read it yet, go to the upper bar and search for it! Anyway, on this second edition I present to you Bastion. No, not the Overwatch character; the game! For those of you who’ve already played it will understand why I’ll say it’s one of the best games I’ve ever played. But nonetheless, there’s people here that haven’t even heard of the game. So, let’s get some details:

As last time, I’ll go over Gameplay, Controls, Graphics & Music and Personal Thoughts, respectively. So, without further ado, let’s jump into it!

Developed by Supergiant Games (also known for other renowned titles: Transistor and Pyre; this was their first title) and released in Steam on August 2011, “Bastion” is a title critically-acclaimed by its artistic aspects, mostly its narrative and its soundtrack. Not only that, but for being a game from 7 years ago it holds up just as fine and remains pretty fresh. Might as well just call it a classic now. But nevertheless, let’s dive into how all of this aspects hold out on their own. 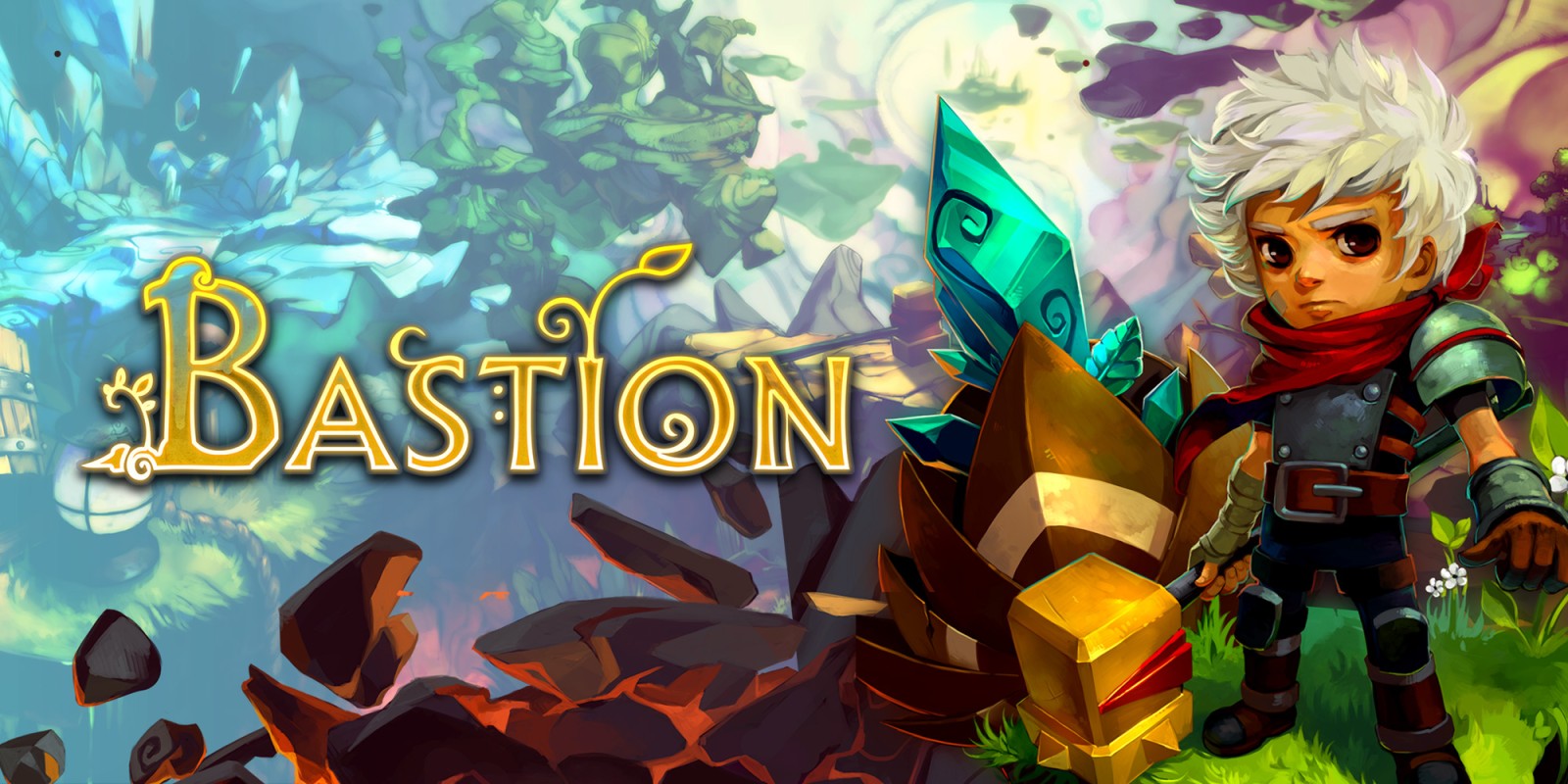 You basically roll around and smash/kill stuff. Pretty easy right? Wrong. There’s a lot to talk about the gameplay, but I’ll try to be brief:

You have your typical HP & XP bar on the upper right corner. Each level gives you more HP and some other bonuses. The Kid can hold two weapons and one Secret Ability (special attack). What’s so special about this is the amount of customization the player has: there are over 12 weapons and 30 Secret Abilities. Some abilities depend on the weapons you have currently equipped: there are 2 abilities per weapon and the other 6 you can use them freely. You’ll use up one bottle of Black Tonic whenever you use a Secret Ability, and you’re also able to heal yourself mid-level with Healing Potions. 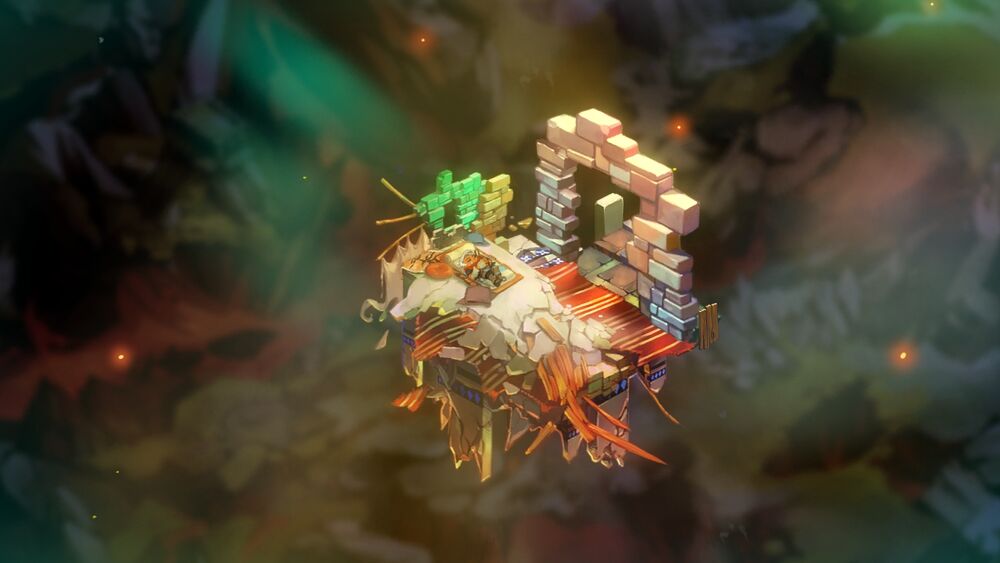 The main goal of the game is to explore the ruins of Caelondia in search of survivors and return them to the Bastion. You’ll find “Cores” too, which will restore and expand the Bastion, adding a new building to it (up to 6); I’ll expand on that in a bit. Every level consists of several groups of enemies scattered around it; sometimes you’re given the option to explore a bit and other times you’ll get a linear path. Either way, when you get what you needed from the level, the place starts to collapse and you gonna run away in search for a Skyway to get back to the Bastion.

Apart from the regular levels, there are some called “Proving Grounds”. This are timed challenges that will award up to 3 key items to the player, depending on the outcome. There’s one Proving Ground for each weapon. This will help you in learning more ways to use your weapons!

Now, the interesting thing about the Bastion is that it acts the player's hub. Each building in the Bastion has a different function for the player:

[ranzacado says: you can get Fragments by either defeating enemies or by smashing some of the background stuff, just like breaking jars on Zelda for Rupees. I smash everything just to be sure.]

Also, around you’ll find the other characters you’ve found throughout the game. Via mementos, you can find out more about their story. If you wanna know even more, there are secret levels called “Who Knows Where”. It’s outstanding how every gameplay aspect is somehow tied to the narrative of the game, a fantastic way to immerse the player even more.

As with most games, you move with the WASD keys, aim with the mouse and roll around with Space. Consumables are neatly placed in the Q and F for Specials and Healing respectively. There’s no need to stretch your hands all over the keyboard, as every key is laid pretty closed to one another. I’ve only played with a mouse and keyboard though;  I’ve yet to see if a controller is supported on the PC version and how well it fares. And who knows how it plays on the phone!

The gorgeous hand-drawn backgrounds really convey the feeling of exploring unknown places, even though most of the background story occurs in the very same place just before the Calamity. I especially adore the world map: it has some cool details but.. I honestly expected the game to run around all of the map; it would’ve been so cool!

The animations are really fluid and the effects express the adequate amount of power on each action. The only downside is that, when there’s a lot of stuff on the screen.... well, there’s a lot of stuff on-screen and it can become kinda jarring at times when you’re surrounded by lots of enemies and you’re just rolling around everywhere. But again, there’s some really fine art in this game.

Sound design is on par with the art, every action and every enemy have a perfect fitting sound effect: breaking objects, using weapons, special abilites… And the best part? The narration. Old man Rucks (pictured above, right side), voiced by Logan Cunningham, narrates everything that happens throughout the game. Gotta admit, this man’s gritty voice fits perfectly with the role and does an outstanding job… and he sings too! Speaking of songs...

Don’t get me started with the music… you can feel it right in your bones! It gives me chills just thinking about it (and I’m listening to it to get in the mood). Every fight, every cutscene, every dialog gets accentuated tenfold: it’s melancholic, it’s wild, it’s powerful, it’s suspenseful… I think I could write a full article just talking about this game’s music. You know what? I’ll even leave the full OST here for you to enjoy it (it’s available on Spotify too) and you can buy it if you want on the Steam page:

The story, the action, the music…. Everything about this game: I LOVE IT. This one has to be one of my favorite titles and with reasons! Ever since I played it for the first time, I’ve never forgotten it. Just by listening to the music I can remember vividly the ambiance, the fights and that old man’s voice inside my head. Although I’ve only beaten it once (yes, there’s a New Game + if you were wondering), I would gladly try and get a 100% completion on this game… if it wasn’t so hard! And now I wanna keep on trying, so I’m gonna wrap it up for now!

I encourage you to check out this and the other two Supergiant titles! They say they’re as memorable and beautiful, if not more, than Bastion! But sincerely, this game’s a must-have.

This has been ranzacado, thank you for joining me and I hope you enjoyed my *cough*totally not biased*cough* article! Tell me what you think about this game, watch your step around the Bastion, and see you on the next article!

Very good
Nothing to complain about
Has all the needed points

This is a great article. theres nothing to complain about this article. It is just in general a good article. Great work dude.

this is rly interesting little game

Thank you everyone for your feedback! Yes, this is original, not plagiarised.

Just a note: if you see the same article but published before, from myself too, it was a tiny misunderstanding.
I resubmited the article several times and appealed to support.

And so it happened that one of the submissions got rejected and then accepted by support and this one just got lucky.

Apologies for the misunderstanding!