Project Zomboid has proven to be one of the most difficult, stressful, and frustrating survival games. In this post-apocalyptic world, all it takes is one bite for your glory-days to be over. One bite begins the zombification process; you continue to play the game while you watch your character slowly die a death which is inevitable. You slowly begin to rot away, slowly transforming into one of the mindless creatures tormenting the world, or at least, what’s left of it. While this game is difficult, it is possible to not only survive, but to thrive. This article will provide information on the most important key-bindings for the game along with some important information that should be known before starting the game.

Starting off simple, you do not want to skip the tutorial. If you are new to the game and/or have never seen gameplay, it is highly recommended to complete the tutorial. Unlike many other survival games, Project Zomboid takes time and patience to learn. You will die multiple times, and it is important to understand key-bindings before jumping into gameplay. Although the tutorial does a good job at explaining the basics of the game, there are several important controls that are not covered in the tutorial; these new controls, along with the controls mentioned in the in-game tutorial, will be covered below: 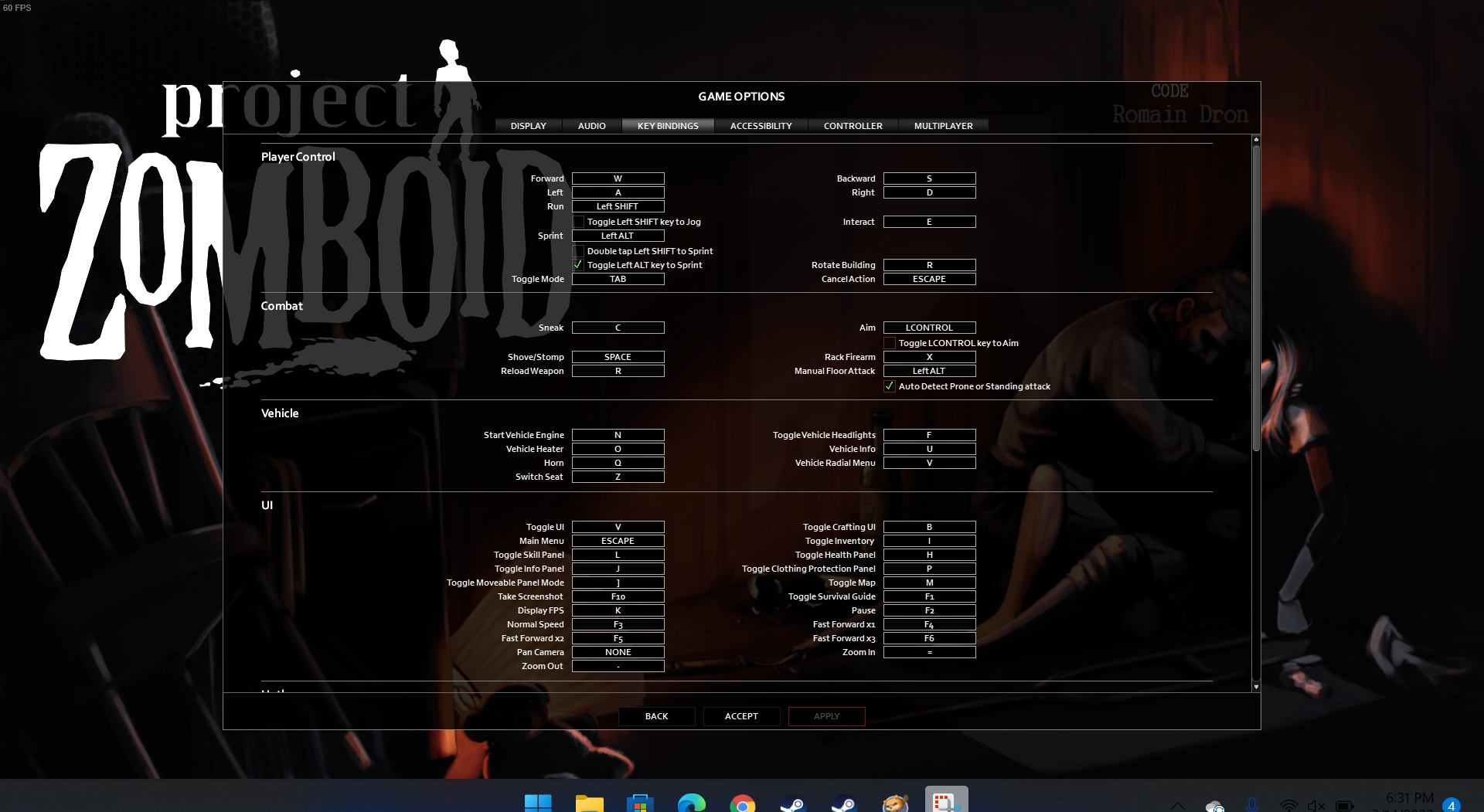 C – Crouch/Stealth: Pressing this key will place the player in stealth mode. This will make it more difficult for the player to be detected when around zombies. However, even if the character is crouched, zombies can still detect you if you walk in front of them, it is recommended to walk behind them at a relatively far distance in order to not be detected. It is important to note that the character can still sprint while in this position, however, sprinting while crouched will drain endurance much faster than sprinting normally.

Left SHIFT – Jog: Holding on this key will allow the character to jog. This will increase the player’s movement speed; however, this will also drain the character’s endurance at a much faster rate than walking. When jogging, the character can outrun zombies and “lose” them if using stealth tactics. It is important to note, however, that it is possible for the player to trip and fall when jogging. This can cause your character to be overwhelmed quickly, resulting in a bite or scratches from the fall. This only occurs if sprinting over a fence, into a group of zombies, or into a group of trees. Additionally, while sprinting, players can jump over fences; this is a good tactic to escape zombies since zombies can only trip over the fence, slowing them down. However, it is possible for the character to trip and fall when this happens; the zombie will trip over the fence as well, typically allowing for enough time to get away even after tripping.

Left ALT – Sprint/Run: Holding on to this key will allow the character to run/sprint. This will greatly increase the player’s movement speed; however, this will drain the character’s endurance extremely quickly, much faster than jogging. Sprinting is only recommended when absolutely necessary, as it will make more noise and can end up attracting even more zombies. Similar to jogging, the player can trip and fall while sprinting/running. Unlike jogging, the character can trip even on flat ground when simply running away from zombies. The chance for tripping is much higher while sprinting than while jogging and can be extremely dangerous.

M - Open Map: Pressing this key will allow the character to open their map. The map will be updated as the character continues to explore the area. If a pen or pencil is in the inventory of the player, the player can choose to write notes/symbols on the map. This is recommended for marking your home/base area, or places of interest such as factories/farms. A player can remove markings from a map if an eraser exists in the player’s inventory; this may be done on the map interface.

ESC – Cancel Action: Pressing this key will cancel any action that is taking place. This includes, but is not limited to, stopping reading a book, stopping washing yourself, stopping exercising, and stopping the process of opening a window. This is an important command if you are in the middle of doing something and get surprised by a zombie; you can quickly cancel the action and either defend yourself or flee.

I – Inventory: Pressing this key will open the character’s inventory, allowing the player to drop things and/or move them around. Right click on items to see options and drag and drop an item to either move it or drop it on the floor.

While the list above shows the most important key-bindings, it is not all-inclusive; it is recommended to skim through the in-game key list before jumping into the gameplay. Some players also change the key-binding for shouting in-game in order to prevent accidentally pushing the key.