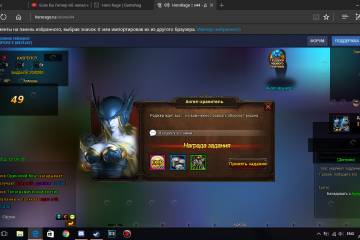 Hero Rage is a browser-based MMORPG game with a colorful world, monsters and PVP mode. The story begins in the fierce after the struggle of the world with the Great Demon, whose soul was broken into pieces with the help of the mighty Excalibur sword and scattered around the world, so that it would never work out to collect the whole evil in one place. And now, after thousands of years, the henchmen of the Demon rebelled and wanted to return life to their leader, but we still have a long way to go through a huge number of various tasks to destroy the adherents of evil, to gain strength and subjugate the legendary sword to its will. The first step that can puzzle a player is the choice of a faction. Only two sides - the Guardians and the War, which all the time fighting among themselves. The game do not have the concept of personal character and his class, since the player controls the squad, which over time can be supplemented with new troops, improve old heroes who have been at war with them for some time and so on. All characters are divided into several types - protection, attack and support, and only the style of play depends on you! Each hero also has his own skills, which must be pumped, killing monsters and completing tasks. So what are you waiting for? Start playing, because only You can save the world!

Prepare yourself to battle in the medieval strategy Empire: Four Kingdoms! Expand your empire and fight millions of other players from around the world.Develop your economy by building a fortress and farm buildings, making alliances and fighting against hostile powers. Stand in the frontline of your invincible army and take part...

Harvest Land is a farm simulator settled in slavic theme and culture with a pleasant musical accompaniment and candy-like graphic.Great men and their wives went on a long adventure in the hope of finding a new home. They arrived on native lands on a large island, where there's a place for fruit trees and large fields.The Slavs a...

We currently don't have any rewards for Hero Rage. Check out our other rewards!
Exchange
138

Lol never heard nor played it. i think its boring

We currently don't have any rewards for Hero Rage. Check out our other rewards!
Exchange
138

Lol never heard nor played it. i think its boring