Hello everyone! Have you ever heard of Madness Combat? I know many of you didn't so in this Review I will show you the main antagonists and protagonists.

Madness Combat is a cartoon of the main protagonist Hank. Hank is the main anti-hero in the cartoon and has appeared in every
installment except the eighth animation. The action takes the place in Nevada.
Madness Combat 1:In this episode Hank is standing near the tree and the boombox man doesn't let him borrow the radio. Hank gets angry and beats him to death. Later on, many people start to attack him.
Madness Combat 2:The people created the agency named A.A.H.W.(Agency Against Hank Wimbleton). Hank initiates the building and kills many people. The Sheriff was his new victim. At the end, when Hank found the Sheriff, Jebus appeared behind Hank and killed him with the Deagle.
Madness Combat 3:Hank was given a second chance. This means that he is going to kill the Sheriff again. The new clown enemy named Tricky was Sheriff's hired assassin. He tried to kill Hank with the M60 but then Hank stabs him with the Warning sign. He then becomes the zombie and starts to chase Hank. In the end, Hank faced Sheriff again but he kills Jebus and Sheriff and gets shot again by Jebus.
Madness Combat 4:Hank is driving his car and he has bandages everywhere around him. He uses his guns from the car and starts the massacre. Tricky became a DJ in ClubM. Hank shoots him and he fell but he got up and commands the grunts to destroy him. Hank slices them and the door crashed because the Jebus appeared with his zombie.
Later on, Hank slices the zombie and tries to kill Jebus with his Katana. But Jebus draws the Deagle from his hand and shots him 3 times. Hank uses the suicide bomb and kills both him and Jebus. Tricky stays at the party and starts to dance.
There are many other episodes that I miss but this is the introduction to the Madness.

Characters:
Hank: The primary antagonist and the only one who started the Madness. He revived many times and is a well-trained fighter.
Tricky: The sheriff's hired assassin that fought Hank but later he becomes a zombie that has got an improbability drive near his brain.
Jebus: A defender that wants to stop the madness but he dies when he fought the Auditor. He has many abilities and powers that cause him to destroy any foe.
Auditor: A Black-figure that has ghost powers that cause him to become invincible. He has continued the A.A.H.W agency after Sheriff died.
Sheriff: Hank's first victim to be ever seen. He seems to be pretty weak because he uses his guards and agents to defend him.
Deimos: The gadget-brandishing protagonist that is best buddies with Sanford. He is loads of fun and likes ATP fashion. He died in the first episode he appeared: MC9
Sanford: Meathook protagonist that is best buddies with Deimos. He is serious and fights hard. He is brave and stays with Hank until the end. 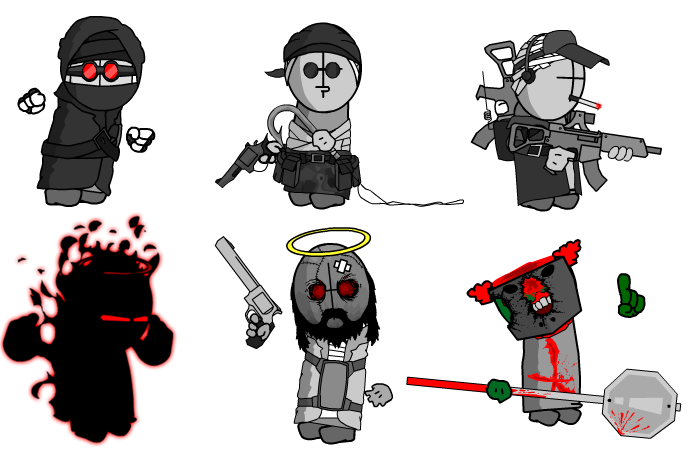 Programs:
So you have definitely wondered how where those animations made? Well, they were made with the Adobe Flash programs. You can use any programs but Macromedia Flash 8 and CS3 are the best for beginners.
Games: There are many flash games you can find on Newgrounds. Here are some of them:
Madness Project Nexus
Madness Project Nexus 2 (Work in progress) wishlist it on steam now!
Madness Interactive
Madness Retaliation
Newgrounds Rumble (Hank is the playable character)

Ready to begin the Madness? Launch the programs and start to animate now!

I KNOW THIS IT VERY GREAT CARTOON AND HAVE EVEN GAME i love it :D

finally i found some of people that know madness combat ;D

I recomand to you is verry good article!