Tomato Way is an action, horror and shooter game developed by VladCastillo and released for Windows on Steam in 2016. The genre of the game, unfortunately, is not defined, but I would describe it as this: a wannabe funny action and indie adventure game. For some reason Vlad's creation is listed as "psychological horror", with the only horror here being how dark everything is and how weird the artstyle is. The game, somehow, has good feedback, and at first I thought that this might be because of it's humor, but after 2 hours of gameplay I can tell you for sure, that it's not because of the "jokes". I don't know how it has "mostly positive"  reviewson the most popular game platform in the world, but I will certainly tell you the truth about what it really is. 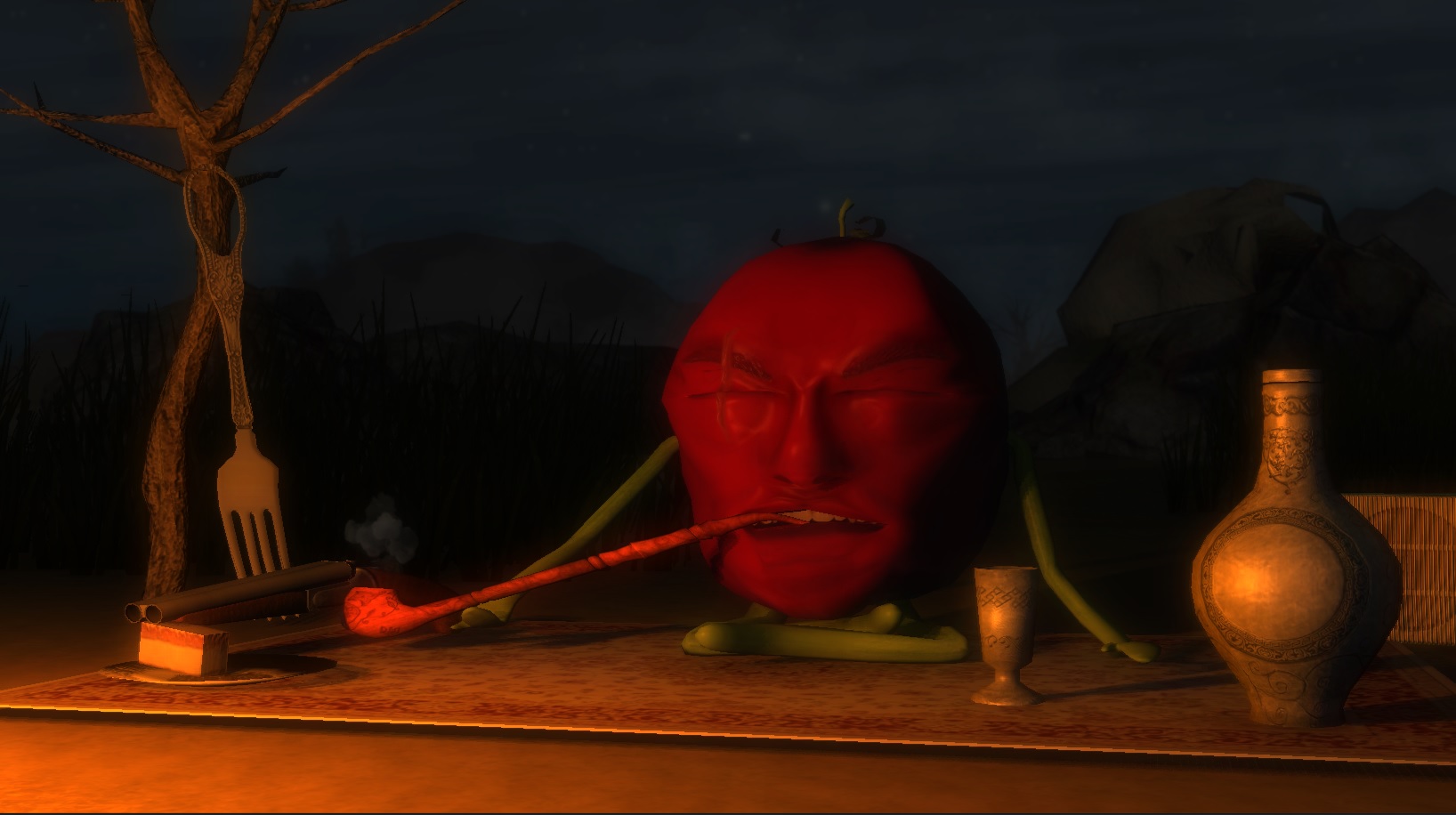 You play as a tomato that is seeking revenge for... something. The game is dubbed, unsurprisingly, in Russian (I think), so it's really hard to understand what's going on, especially since the translated subtitles aren't any better than google translator's. The game is based on you going around various levels and killing other vegetables and bugs, yet somehow is still gory, because for some reason they bleed (A LOT). Anyways, the weapon you use to kill them is a shotgun and a fork, both of which are odd to use and have no weight to them. The combat is just bad because of how weak your weapons are and how many enemies attack you at once, and the player feels too lightweight and fast, making it hard to move precisely. 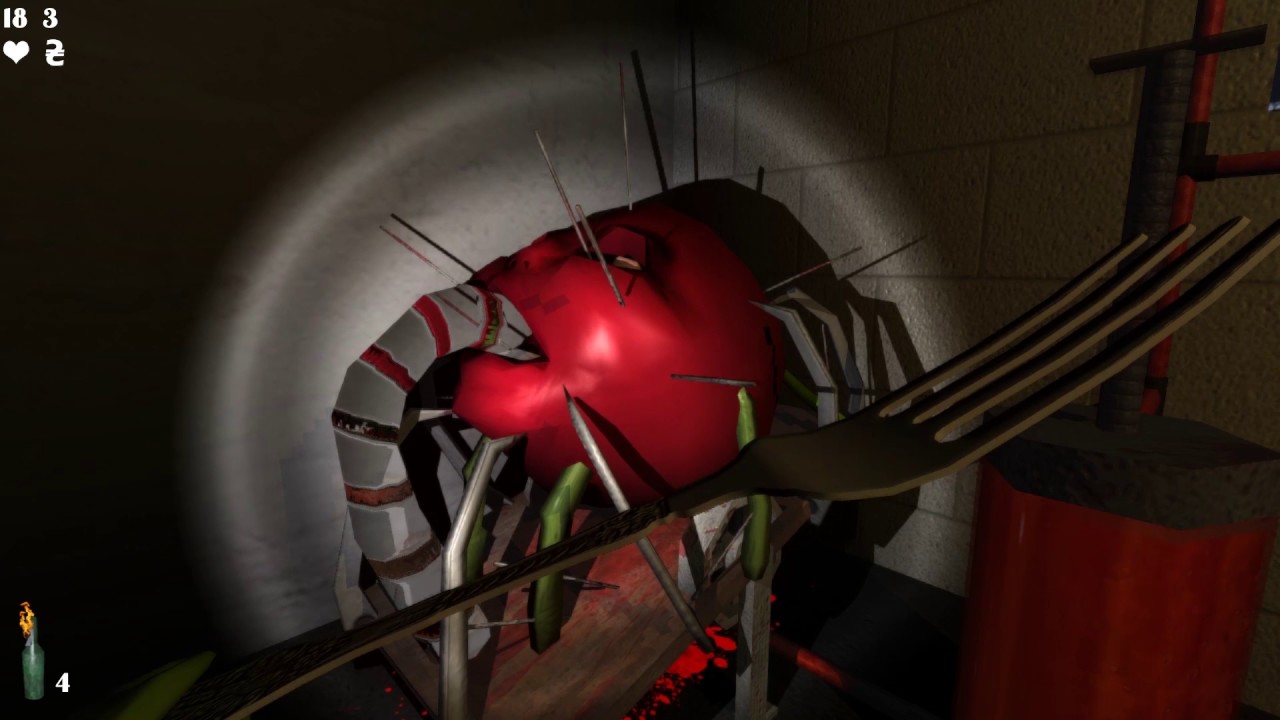 The graphics and the artstyle are just disgusting looking, and even though the game has wide variety of aspect ratios and resolutions, all of them look bad and low quality.
The character models are as unaesthetic as they can get, with their animations being just laughingly poor. Also, that is the only humor you will ever see in this game, because the "Funny" tag must be here because of how hilariously bad the game is, as the jokes are either nonexistent or so unfunny that you will not even know that they're "jokes" in the first place. That might be, however, because the game is mainly in Russian (or maybe Ukrainian?) language and is hard to understand, especially as I said above, with the bad translation of the subtitles. 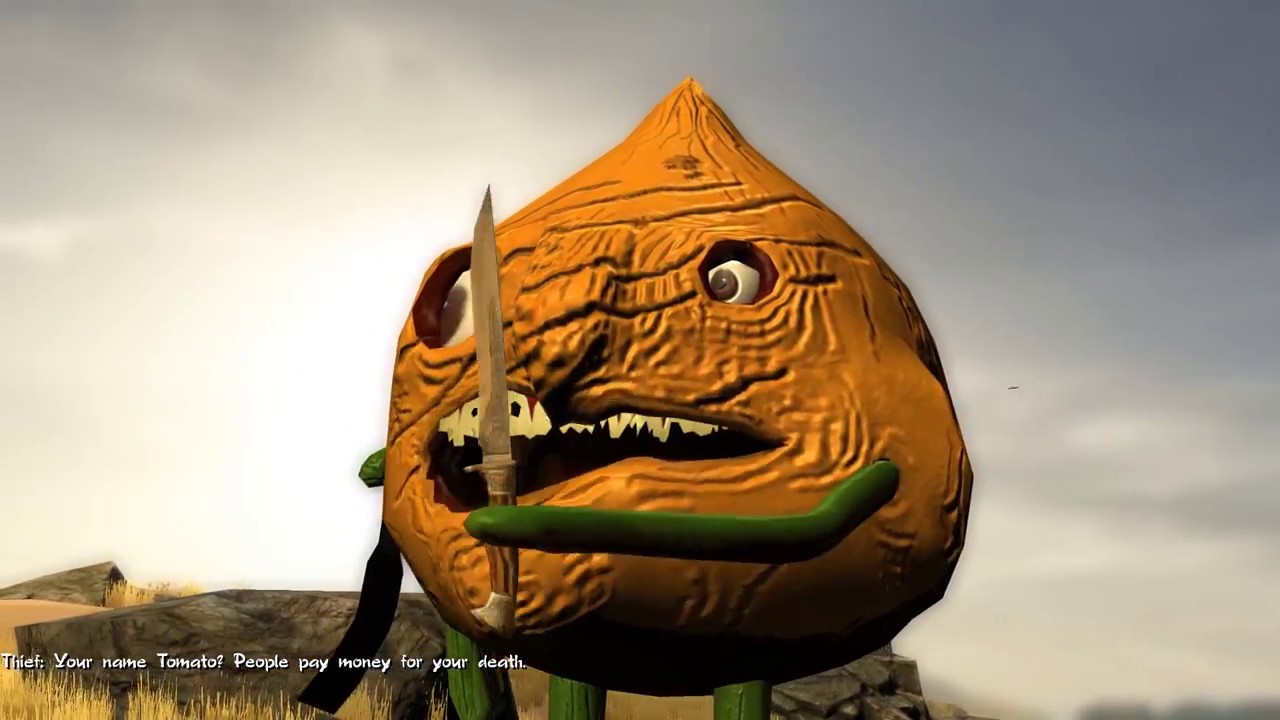 What a beautiful character model, am I right?

Moving on to the controls: they are bad for no reason. The creator thought that right click for reloading is a good idea. Also, the only way to beat big swarms of enemies is to throw a grenade, which you can only find out about if you click on "Q" on accident, because that's the button for using one. They also have this weird delay, which doesn't help in either the combat or the moving aspects of Tomato Way.
Because of the atmosphere, which is supposed to be scary, everything is dark as hell until you get close to something, resulting into you constantly walking into walls, objects, or the worst of all - enemies, and when they get close you're done for. 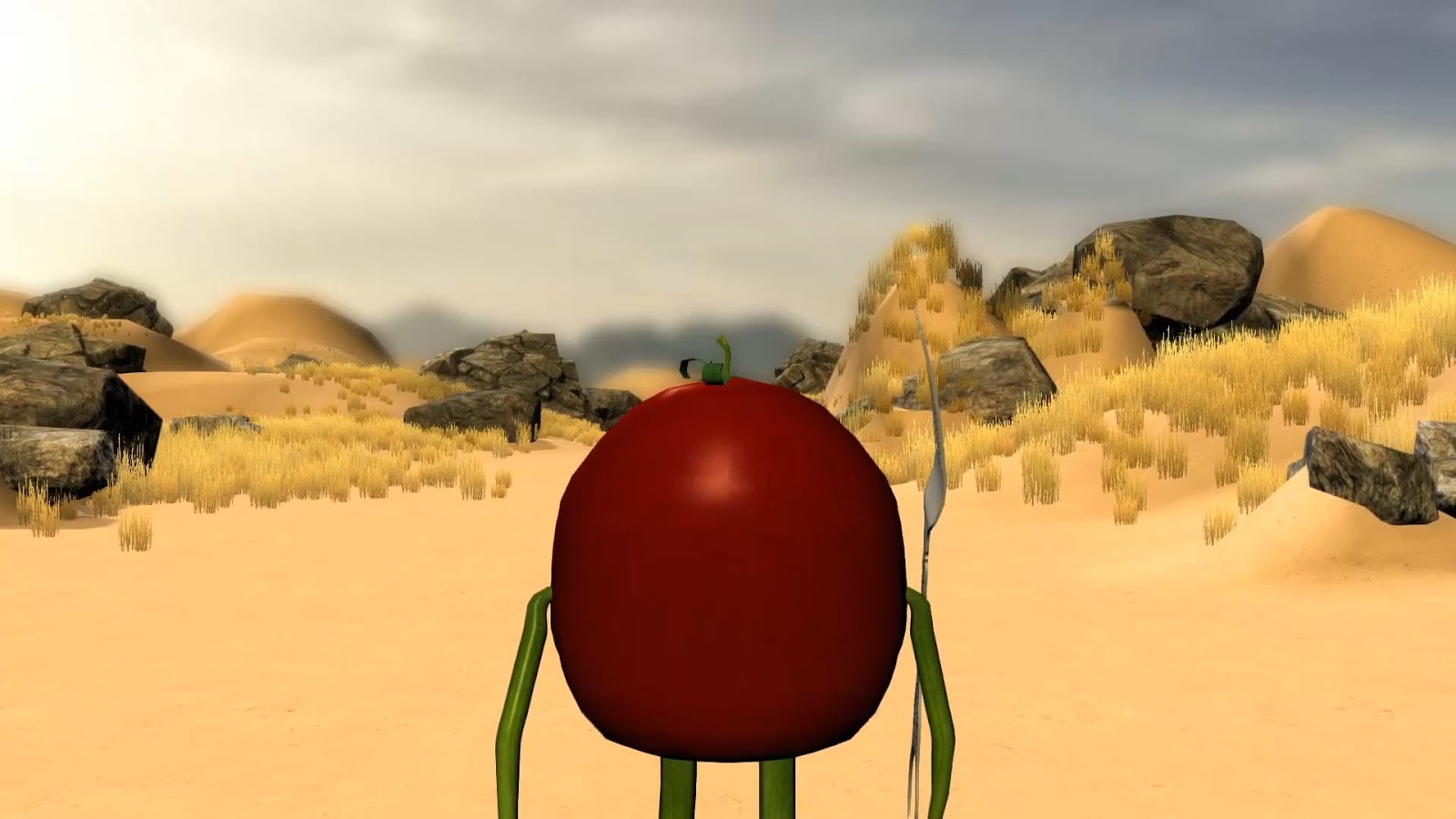 The map design, as can be seen above, is plain and boring. The objects around you are just low resolution asset flips, making the game's graphics even worse. The soundtrack, oddly enough, is fine, but even they can't salvage the awful gameplay. It is monotonic and mind numbing, with the boss fights being the only saving grace. The combat, the movement, the visuals, the story, the humor, everything except the bosses and music are horrible. And to top it all off, the game is like 2 hours long, and the performance for such a bad looking failure goes in line with everything above. I get around 15 to 35 frames per second, sometimes going as low as 3 FPS, because nothing is properly optimized. People on Steam are having performance issues with a GTX 1080ti, so that really says something. 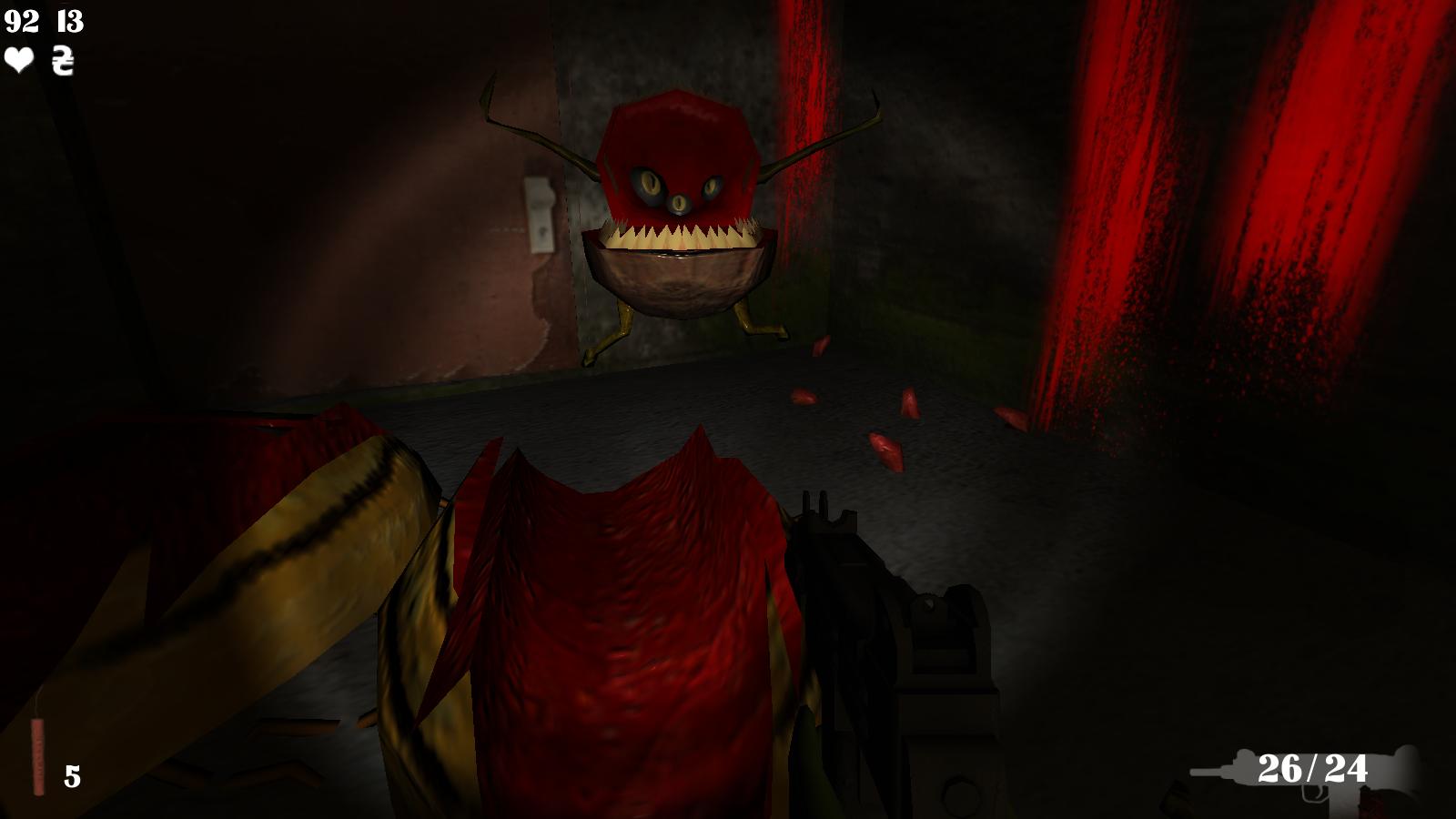 Tomato Way is simply a no-go. I wouldn't recommend it to even my worst enemies, yet it somehow has 'Mostly Positive' feedback on Steam. The game is poorly executed and optimized, unnecessarily violent and simply unplayable because of the broken mechanics, controls and visuals. The game costs 2.99€ which is an absolute outrage for what it is.

Verdict: Would not recommend to anyone. The only humor and horror here are how laughably and horrifyingly terrible Tomato Way is.

Lol Why would someone eveb want to play this?

Look amazing i will try it

Haha nice article. It definitely is so bad that I would only buy it to laugh for it :D

good job, not something I would play tho lol

LOL who even thinks of making a game like this