Rate this article "The story of Agar.io"

The story of Agar.io

In the first half of the year 2015, Matheus Valadares created a game that would take the internet by storm, but that would not last forever. You may have heard of Agar.io, the massively-multiplayer game where you are a cell attempting to absorb other cells. Agar.io, story is one of sudden, unexpected and short-lived success that was later ruined by Miniclip’s clumsiness.

On April 28 2015, Miniclip released a game they had bought from game developer Matheus Valadares. The game’s principle was simple enough: eat and don’t get eaten. Players could also split their cells into two halves in order to reach out for smaller, faster opponents and absorb them. Viruses were also in the game; a spiky green ball that explodes cells that hit it into sixteen pieces, rendering them vulnerable to attacks from virtually anybody. Viruses could be shot at people by firing pellets from one’s cell. The aim of the game was to become the biggest cell in the server, and maintain that position for as long as possible. The game was simple enough.

That’s how it seemed at first. Soon, people began finding a way to team up. At first, people teamed up by feeding each other with pellets, but soon the internet began to learn how the game worked, and eventually a technique known as Split-Running became widespread, where the two teammates would split around and into each other while moving in a certain direction, which allowed for much faster movement and minimal mass loss (you lose mass progressively over time, meaning you have to keep eating stuff). More and more little tricks were discovered such as the Trick Split, the Pop Split and the Reverse Split among others (a lot of splitting involved, I know). 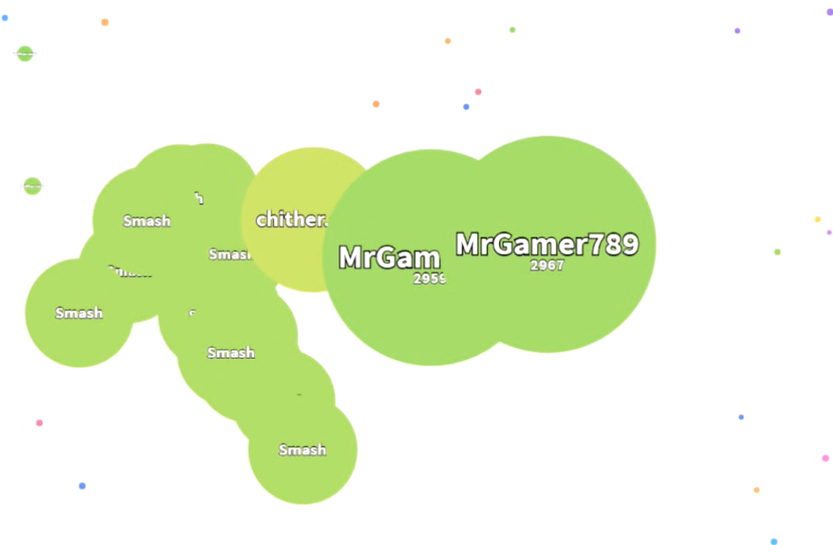 The game was really improving. Miniclip added an account system where people could log in with their Facebook and Google accounts in order to have access to skins and certain buffs. There were four game modes: FFA, Experimental, Teams and Party. FFA was a Free For All (obviously), Experimental was a version of FFA where Miniclip added certain differences, Teams was a game mode where three teams tried to battle for supremacy and Party mode was basically FFA, but where friends could be invited to play in the same server to team up together.

YouTube played a huge role in the game’s popularization. When the game came out and started to become popular, many YouTubers dedicated to the game began to emerge. A great deal of people started to upload Agar.io videos, but the two most notable were Jumbo and Wun Wun. They were widely regarded as the best Agar.io players by the community, and held the highest subscription count. Jumbo in particular reached one million subscribers much faster than it takes the average YouTube channel, and Wun Wun was the creator of the most viewed Agar.io video on YouTube (as of writing this it has over 48 million views).

After a while however, the game started to decline. It was mostly due to Miniclip not posting any updates to the game, except bad ones. For example, there was the one where they changed the appearance of the skins, making them much worse. Honestly, all the skins were becoming terrible, even the new ones, and yet people still used them. I came up with a theory that people seemed to think that the uglier the skin, the more pro it made them look (stupid, I know, but honestly it’s what it looked like). For me, Agar.io’s demise began when Wun Wun quit YouTube for the first time. He later returned for a short time in response to the #WeMissWunWun movement, but then quit a second time for good. However, it was from the first time he quit that Agar.io really began to decline. Bad updates and the community’s own unwillingness to stop cheating and making the game unplayable (through the use of bots for example) contributed to the game’s fall.

It didn’t take long for all Agar.io channels on YouTube to start losing views drastically. Many have died, and those that are still active are nowhere near as successful as they were during the game’s heyday. Agar.io has spawned many other games that have been inspired by it, such as Slither.io and Diep.io, and a score of other such games. Agar.io’s success may have been short-lived, but it was there. Agar.io is still available on the internet, and after Fortnite’s incredible success a new Battle Royale game mode was added. You can still go try it, although if it’s your first time playing you most likely won’t stand a chance at this point. There was a time when I would have strongly recommended Agar.io to my friends, but I can no longer do that. I can only say one thing: R.I.P Agar.io, you shall truly be missed.

Rate this article The story of Agar.io

after reading this i played a few rounds of agar.io to pay respects

**** the nostalgia from this is crazy

You just reminded me one of my favourite older games I played! Thanks! You made a great Article!

Agar.io was a trendy game and now following with other .io games that are just jumping into the bandwagon. The .io games nowadays looks dead to me.

good article about a good game

Lol, it was the first Battle royale game, only the true og know to hpay the game still