Rate this article "Review of the game: Under Night In-Birth Exe:Late[st]"

Review of the game: Under Night In-Birth Exe:Late[st]

If someone played Melty Blood, an interesting fighting game / visual novel of the Japanese developer team French Bread, then you will definitely be closest to getting a quick glimpse of what kind of game this is about. The extremely popular title (primarily in Japan) has got its fans on the European and American market, and although it remains unknown to many (and even to me, because I'm not a Melty Blood game), it was enough that in co-operation with Arc System Works they released fighting game Under Night In-Birth Exe: Late [st]. Since we live in the "new golden age" of fighting games, there really is no need to look for a lot of excuse to transfer this game to markets outside of Japan, and this has been done almost eight months after its release in Japan. After it came out on PlayStation 4, PlayStation 3 and Vita in February of this year, fans of fighting games on Steam have also got a chance to buy this game, so it's the perfect time to see how the game of a long and strange name manages to crawl in context with other fighting games, and whether there are places for Under-the-In-Birth places in today's world.

Under Night, at least when it came to PlayStation consoles in February, it came at an awkward time. Various more sophisticated fighting games on the market just came out, and even from Ark System, their place was getting safer on the shelves of the store and the BlazBlue Cross Tag Battle, and the great Dragon Ball Fighter Z game. When we add it to still popular Injustice 2, Street Fighter V and Tekken 7, which are also in the main tournaments of the main game, and there was also a long-awaited (although disappointing) Marvel vs Capcom Infinite, there is a pretty hopeless situation for a game that does not exist no known character, is not part of a big anime or comic franchise, and there is not a huge fan of fans, except those who simply adore all 2 D / 2.5 D fighting games that come out under the Arc System Works edition. And so, a few months after the exit, only enthusiasts know about this game, and those who have the styling of combat mechanics and some of the small things that are not seen in other games liked and who have formed a community of players with whom they can try everything learned, are playing. 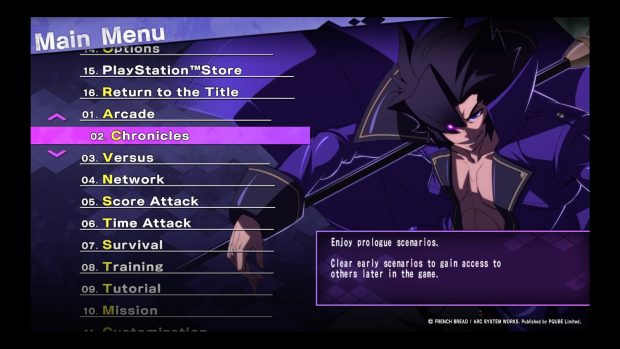 The game certainly has reason to find these more regular players, but also many other fans. The beautiful appearance, animation and character design may also make them more interested in them, especially since some are quite clear archetypes of characters in fighting games, from terrible snagers who are larger than other characters, snappy fighters and fast-moving boats, hair to self-depressing and depressing guys who use vague magic. Ecole Software / French Bread has tried to record all the boxes of the necessary items in fighting games regarding the presentation, so we have a dynamic soundtrack with a couple of very good and memorable tunes, announcers before the start of each round, punctuation characters after they get the fight, and various single play modes that we can expect in this game. Here I am primarily thinking of a time trial, tutorial and challenge mode in which you can grind your skills, and learn a lot about a somewhat innovative system of combat, about which we will soon after.

There is, of course, a story mode, made as a combination of classic Arcade mode and Chronicles mode. The latter is a visual novel, immovable images with a narrator and dialogues where you can learn a lot about the background of each character. After each faded / heard part of a story for a single fighter / borkin, new characters will be opened, whose motivation can be checked in more detail, while Arcade Mode brings the classic ten battles with the last boss battle. Neither through Arcade mode we get real animation or short films, such as introductory games themselves, but we still get only images and dialogues that announce (explain the motivations) of the battle itself. As far as these dialogues and the stories themselves are concerned, it has both good and bad sides. 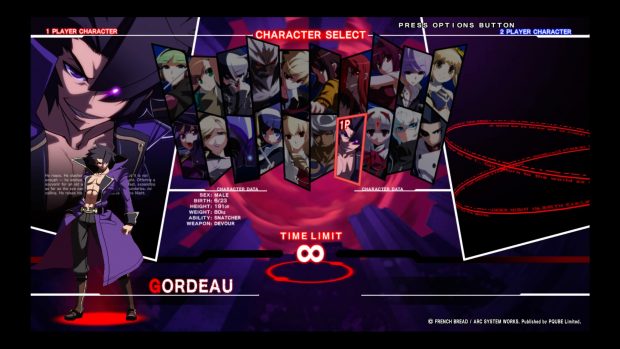 The good sides generally enter the domain of humor and require players to otherwise like these strange premises and funny dialogues that sometimes bind to serious issues and can be interesting. As for the game itself, monsters called voids, once a month, go out and feed on energy. Whoever survives a void attack becomes In-Birth, and that's most of the main characters in the roster. But contact with monsters brings various other consequences, some also become monsters, some end up "in between" and are crazy, and many are part of special organizations that guard the order and protect civilians who do not even see those monsters while other organizations try to use voids in other (subversive) purposes. As you can expect, the premise of how simple it is so stratified and provides a background for various characters, different personages, monsters and heroes, and you can see additional stratification exactly in Chronicles mode, and with careful tracking of everything that happens with the characters in the Arcade mode. Of course, like the game itself, the story is not for everyone, but the complicated-interesting premise is the quality that is characteristic of this type of game. Ha, at least it's not a tournament to death with a cash prize. 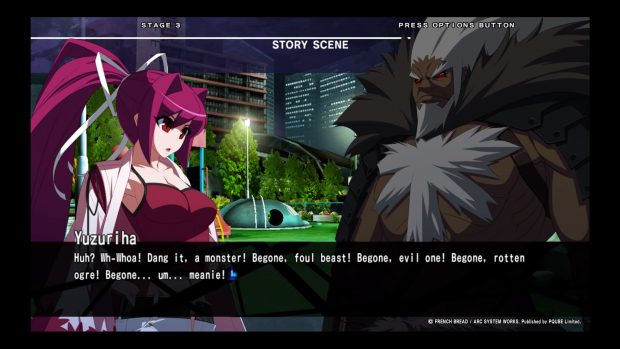 Given the last sequel (which I did not play and few who seem to me and played in our market), the game brings a new 4 character, among which is certainly the best Wagner - in terms of design, but also moves and stories themselves. The sword, shield, speed and simpler performance of some special moves, inviting ghosts that were knights, mystic cloaks and an interesting backdrop to her life in Japan make it an interesting bork, although many will find some other favorites. There are also Enkidu, Mika and Phonon along with it, which will not be meaningful to everyone who plays this series for the first time, but it is important to note that the first game, which came out on the "troika", got some additional modes that were then lacking to those who they played this fight game, at least if it is judged by Reddit's players and forums. The characters are, of course, different in their moves, and within the roster of (only) 20 characters you have those who are character characters, dash characters, who are more dangerous in close combat, who have stronger missiles, etc. And this game covers various combat styles and allows many different strategies depending on the type of players that they are. And to enter the strategy at all, the combat mechanics of this game must first be understood. And in any case it requires a lot of habits and learning. 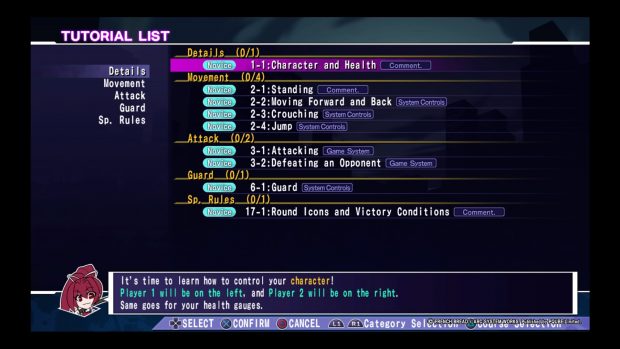 Some things will be very close to people who are fans of such fights. The basic controls are three keys, for light, medium and heavy attacks, with an additional energy-saving button. Blocking, reaching is also there, and the longer hold of the key for the most difficult attack makes this attack even stronger. According to all of the above, characters are faster, have stronger moves at a distance, or stronger basic attacks. Basically, all the fines are of course there, and the system of performing special and intensified attacks is the main novelty that requires you to learn and practice. However, since I found myself unbridled times, I explained it more clearly, rotating the tutorials and several times, it is still evident that different shades, additional possibilities and performance of the combo are not covered. And they do not really need to be, but the basic part of that mechanics that can be explained in the end is a special bar at the bottom of the screen, in the middle (which you can see on screens), called Grind Grid.

By keeping that fourth button (x) or attacking and defending activities, that circle in the center itself fills up, and the player who completes the first round gets a special buff and strengthens the moves that the grid bar automatically spends. The other bar on the left (or right) of the grid allows for additional reinforcements by a slightly more typical principle for the genre, which are instant by pressing all four buttons simultaneously or even stronger special moves. Special moves as well as combos are semi-simple, i.e. their performance will be familiar to everyone who plays BlazBlue and similar games. What else game has is the ultimate move that can be done when you have less than 20 percent of health, and certain combos that you need to specifically activate. And that, I think, is sometimes just the tip of this iceberg. As you can see, the complication is a lot, it is subject to exercise, and the fight itself is layered and suppressed by a great dose of strategy. Too much can also be discarded if you are a casual player, of course, but your full potential Under Night just fills through the grind grid and these additional moves. Of course, there are those who are experienced gamers and real experts, so they may not be able to answer all of this, but I believe that this will be an interesting (and grateful) experience for those who play Arc System games. Sometimes when performing all these moves, which is also visible in the tutorial, the impression is that the controls do not respond in time, and that some of the moves, despite your correct execution, do not occur. 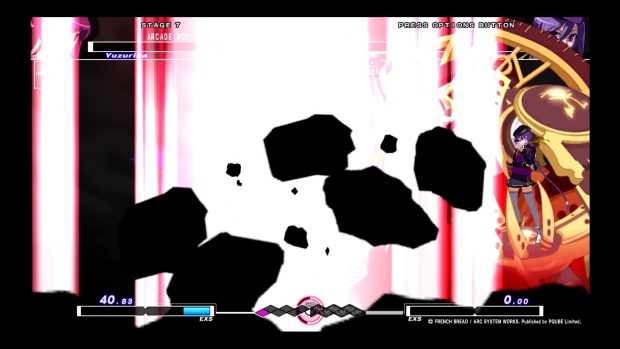 Under the Night In-Birth Exe: Late [st] even now, when she just came out on Steam, and there's a lot of competition there. But in the case of both Console versions and PC versions, it's a game of confidence that you want another fighting game, a little bit of freshness and independent and competitive playing in the Arc System Works ambience. The game is no better than the Dragon Ball Fighter Z, Guilty Gear, BlazBlue, but do not even try to be. Trying to just get alongside, somewhat, found with these games, within the domain of solid fighting games. And it really is, and I warmly recommend to everyone that at least try it out or get it on one of today's discounts.

Rate this article Review of the game: Under Night In-Birth Exe:Late[st]

developer team French Bread, then you will definitely be closest to getting a quick glimpse of what kind of game this is about.