Rate this article "Review of the game: Super Bomberman R"

If you are a little older, and Bomberman Games marked your first days of your gaming youth, then this series (I suppose) you still unconditionally love. The simple premise of the game that puts characters in the labyrinth where placing bombs that shoot in various directions destroy your opponents has enjoyed great popularity in the 90s while trying the same later. If we ignore the first versions of the game, by the late 1980s and early 1990s, perhaps the best Bomberman title was the PlayStation One game of the 1998 Bomberman World. After that, as usual with many classics, turbulent times passed through the 2000s, with even more "realistic" interpretation on the Xbox 360.

It's hard to say that with the announcement of the Nintendo Switch console was somehow expected that Bomberman will try to return to the old track of fame just over Nintendo. The original laughs of many were, however, overwhelmed by strange older fans (including myself) who hoped the game would get some success, and would convince Konami to give others a new vision of the old-school series. That day finally came in June this year, when Super Bomberman R came for Xbox One, PC, and the PlayStation 4 console on which this game was tested. 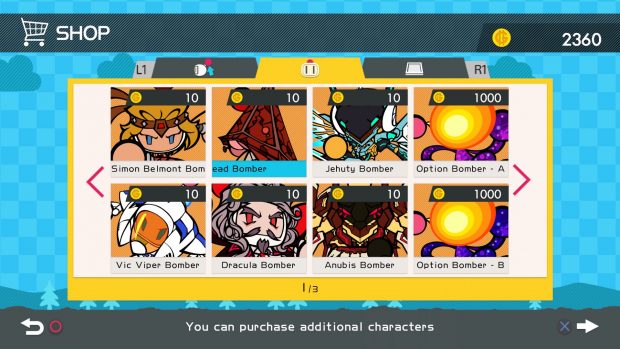 We are starting with a single play, and still an existing story mode that, through a certain "naive" premise (and what kind of other and can be in the game of robots that throw bombs on one another), gives tasks in a familiar labyrinth where you destroy enemies with bombs, but and you're opening new roads. It is, at the same time, the main explanation of the game, in case you need it anyway. The default simple arena, i.e. a kind of labyrinth, surrounded by various "walls", most of which you can demolish with bombs and reach the finish line. If there is not a specific space to reach and which is the goal of the mission, then it is most important to destroy the other enemies with bombs - whether they are other players with their Bombermans (in a local or online multiplayer) or robots, other weird creatures and machines that can hurt you.

But a single play for this game is needed because it gives you the opportunity to love Bomberman, learn the basics and try everything that the arena and the game itself can do, through the power-ups for your Bomberman (the possibility of simultaneously releasing more bombs, dropping bombs, etc.) or during fun boss battles that showcase all the splendor of design, ideas and opportunities that the game offers outside the battle itself between 4 players. What disappointed me, however, is the "childishness" visual animations and the style of the story. However, he did not have to be serious, but the franchise in the past had a greater degree of sharpness and, therefore, a better and more interesting mission, while here everything was accompanied by a lively dialogue and a complete group of Bomberman guided by the original, white Bomberman. Basically, this is not bad, the game is a priori intended for children, and it was primarily made for Nintendo Switch, which does not diminish the quality of the gameplay, but it was still a bit surprising. Considering that some arenas are unnecessarily colorful due to such a style, we see that some problems with the transparency of the labyrinth have been created. Some color combinations are simply eyebrows, and it's difficult to estimate the depth and length of some parts of the labyrinth, until your eyes get used to it a little better after a few minutes. 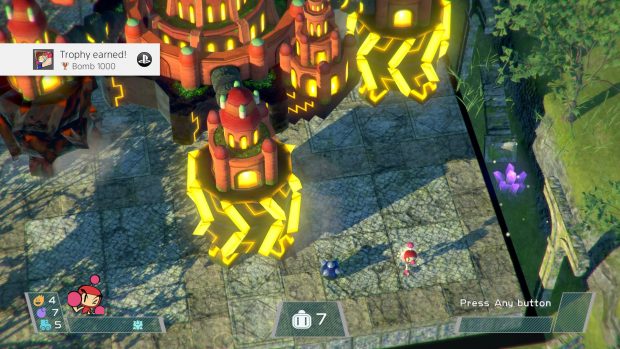 On the other hand, some other arenas / labyrinths have been made quite well. Technological progress has to be evident in one such old game, where 2D is actually a part of the past. As I have already pointed out, through a single play you also have missions where certain people need to lead to rescue and protect them from the enemy, jump to the higher floor, throw bombs to enemies from that location, and some arches are divided into two or more labyrinths, making the environment much larger than some older fans are accustomed to. These innovations in principle work well, and they are already mostly reserved for single play and add some kind of versatility in a predictable way - a few planets, on each planet at 5 levels, and a boss battle in two works and a new planet. Some bosses are more challenging than others, and some levels become more difficult, but this happens primarily because enemies are respawned or increased by the number of times the time goes, so weight actually depends on the amount of enemies that attack you in a moment.

In multiplayer everything is much simpler, standard league progress through separate battles brings precisely to-level hopes, you get achievements, titles and badges as you progress more in the leagues in which they progress with as many victories as possible. Here pairing in online gaming goes smoothly than in another, much more interesting mode of the name of the Grand Prix, where you do not have only the Bomberman squad that is available in the story mode, but a lot of guest characters such as Ratchet and Clank or Solid Snake, and many other characters from the Bomberman series that are a welcome boost and versatility. Grand Prix brings a lot of other rules and ways of playing. 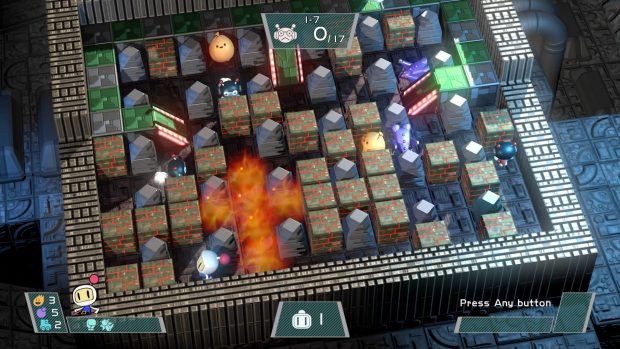 The Super Bomberman R is, in the end, what you expect. Nothing less, nothing more. Some of the notorious arena can frustrate, but from single play, and multiplayer you get what you expect from a standard Bomberman game that is more rooted to celebrate than trying something new. What went on through the novelty (at least what could be tried) are the arena on several floors, which were sometimes a very welcome novelty, if the labyrinth was "pleasing to blame". Even new things do not need to be so much, if this novelty is not certain, and if it does not guarantee a new dimension of Bomberman's fun, then (at least for now) it's not necessary to change most parts. And if it's worth it, it will point out the time and (hopefully) a large number of online players, after which they could see how much online gaming has potentials.

Rate this article Review of the game: Super Bomberman R

The only thing I don't like it's the big paragraphs, but on hindsight, they provide the necessary information. Good article!

Nice one. Keep it up.

I remember I saw another review in the portal but this one looks better. Thumbs up!