Jetpack Joyride is a 2011 sidescrolling runner game published for Android and iOS systems, along with other mobile and home game consoles.

In Jetpack Joyride, you control a man known as Barry Steakfries, who has broken into a laboratory to steal a jetpack and fly around with it. It may look easy at first, but it's actually pretty challenging at higher skill levels! Controlling the jetpack is simple. When the player presses anywhere on-screen, the jetpack fires and Barry lifts into the air. When the player lets go, the jetpack turns off, and Barry falls. Barry automatically runs forward, so the player only needs to control his vertical motion.

The goal of the game is to travel as far as possible without touching any obstacles, collect coins that float along the path, and collect Spin Tokens. There's many obstacles, such as zappers, lasers, missiles, and more. If Barry touches any of these, he dies instantly. However, he can use the Spin Tokens he collects to play a slot machine game, which allows him to get extra rewards such as more coins, an extra life, explosives to propel his body further, a head-start for the next round, or a temporary coin doubler that takes effect next round.

Additionally, while in flight, you can find neato vehicles! These come in rainbow colored boxes that just float. Hitting it will give you a vehicle to ride in. Some are more realistic (motorcycles and jet-skis), while others don't make any sense at all (teleporters, metal birds, giant dragons...). Regardless, they're all unique in their own regard and help make the game more fun. 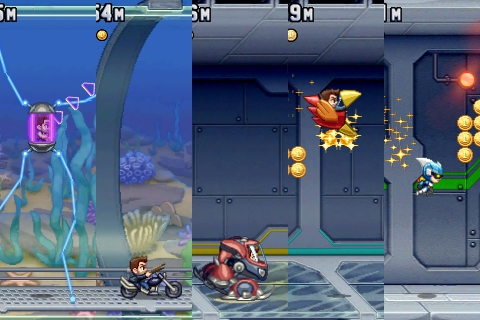 A few examples of vehicles.

Okay, so you might be asking "What can I do with the coins I collect?". Well, when a run ends, you have the option to visit a store called The Stash. This has different items such as character outfits and different jetpacks, along with one-use utility items (like extra lives). It also has one of the most important buy-able items in the game: Gadgets.

Gadgets are bloody useful things. Some might increase the amount of coins you get for picking them up. Some might let you jump high before firing your jetpack. Maybe a gadget will give you a free vehicle at the start of a run, or maybe one will disable zappers! One gadget is even a robot dog! You can have up to two gadgets equipped at a time (unless you make an in-app purchase to have 3 at a time), but you can buy as many as you want and swap them out between runs if needed.

To maximize the fun factor of the game, the player is provided with three missions at a time, such as running past a certain number of scientists, avoiding coins for a set distance, flying close to a certain number of alarms or obstacles, or some other strange thing. Completing a task will award you with Stars. If you gain enough stars, you'll get to a higher "rank" and receive rewards.

So! In conclusion, I think this is an excellent mobile game to play. Sure, it's been nearly a decade since it was released, but it's still being updated and is definitely worth a try. Have fun!

I remember playing this game as a little kid, truly a timeless classic , but it seems repetitive at points

The one game that never gets old ever. Ah,good times.

I remember playing this game as a little kid, truly a timeless classic , but it seems repetitive at points