How to complete all 3 tasks in War Thunder

War Thunder has the greatest rewards on Gamehag, currently at 5000 SG, but is one of the most difficult games to play, with a steep learning curve. I will be discussing the basics that you need to know in order to complete all the tasks in the "Ground Forces" mode.

In ground forces, you control tanks and other AFVs. You will start with prewar to early war tanks. These tanks can be clunky and slow but are fun to play in general. To kill an enemy tank, you must kill all the crew by shooting a shell into the enemy tank. Knocking certain crew members out (The gunner) will disable the enemies ability to fire for a brief period, and shooting the driver will make them unable to retreat.

Different tank parts can be knocked out as well. The engine, the cannon, tracks, and turret ring (what allows the turret to turn) can all be destroyed, forcing your enemy to repair which leaves them immobile for anywhere from 20 to 50 seconds at this BR.

Guide to the first tasks:

Pick ground forces when you start up the game, and then for the nation, I personally picked Germany so that's what I will be basing this tutorial off of. One of the greatest beginner tanks is the Pz.II C (DAK). You get it for free if you play your first ever match as German ground forces. It sports a unique 20mm autocannon, meaning it can fire 10 shots without having to reload. While it's starting ammunition is terrible,
you can unlock the Panzergrante 40 under ammo types. 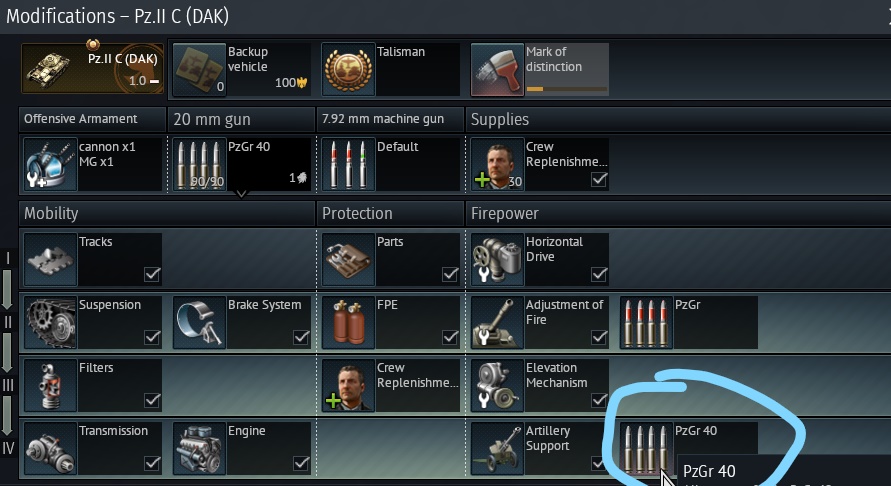 This will take some grinding with the Panzer 2. Aim for the sides of enemy tanks, since your default ammo type isn't capable of much penetration. Once you have unlocked this, be sure to take around 15-14 belts of it next time you go to battle. It sports up to 64mm of penetration. For context, the Soviet starter vehicle, the T-26, has 15mm of armor on average. You can easily penetrate almost every tank at your BR with this, and since you have 10 shots, just aim for crew members and you will easily rack up kills. I would also recommend researching more Panzer 2s as backups. If you are interested in playing War Thunder, you should select Realistic Battles. There are no penetration indicators or names hovering over enemy tanks, since almost everyone plays RB. However, for the task, AB battles tend to go faster. It's your choice to make. It should also be noted that, while the Panzer 2 has up to 64mm of pen, the velocity of the shell drops very quickly, meaning that the further your target is, the less likely you are going to pen it, and the bullet drop also will get amplified.

Tanks to look out for:

B1 Bis (France): If you get uptiered to 2.0, you may encounter this beast of a vehicle. It has very good armor and will be difficult to kill. However, it has terrible speed and is therefore vulnerable to flanking, or simply running away.

T-35 (Soviet Union): At 1.3, you might have to face this huge tank. It has 10 crew members, making it difficult to kill with the crew sniping strategy, and is huge, making it hard to take out more than 2 crew members at once, and has several turrets on it, making it less easy to flank. You'd be better off letting your teammates deal with it, since it is easier to take out with a tank that has a shell with explosive filler.

LVT(A)(1) (USA): Out of all the tanks to look out for, this is the most common one by far. It is a starter American vehicle, and is similar to the T-35 in the sense that it's crew members are spaced out. It can also flank in the water due to it's aquatic abilities. A few well placed shots can end it, but it can be difficult to hit them.

Task 3: This task requires for you to get a few golden eagles. Golden Eagles are premium currency attainable with real money. Never fear however, since completing all the tutorials in game will give you sufficient GE for the task.


And that finishes my guide on how to easily complete the War Thunder tasks. I hope this helped you!