Xenoblade Chronicles 2 is the third part of Xenoblade Sage, which is the third saga after similar series. The work is not too much related to the previous parts, and is taking place in the fantasy world in the clouds. The genre plays the RPG with real-time combat team based on the combo attack.

The Xenoblade Chronicles series has been the last six years of the silent suffering of many RPG fans who are not playing on Nintendo's consoles. Thanks to the mild disappointment of Final Fantasy XIII, Xenoblade briefly switched to the leading name on the jRPG scene, and when the XC2 was announced when the Switch console was introduced, the game was immediately recognized as a "hot exclusive". Considering the quality of Mario and Zelda, this is certainly not such a hot robe unless you are ignoring the sophisticated female characters in Anime style. In that case, the Xenoblade Chronicles 2 will be a paradise for your eyes. 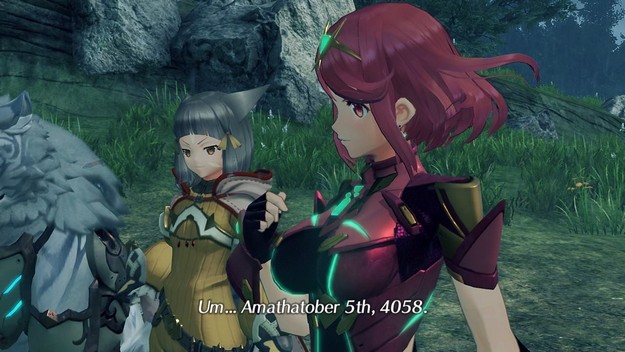 The gameplay is about the search for a paradise called Elysium, a place that civilization should replace the world in the clouds worn on the back of mythical Titans. The main character is Rex, a kid who is doing a dirty job in treasure hunting and acquaints a gifted and highly developed girl Pyr with a series of circumstances. Besides having breasts that are opposed to the well-known anatomy of the human body, Pyra also has a hidden power that makes one evil organization want for itself - and it does not breach them all if you understand me. Rex can not allow this as her beloved dog guard.

When you ignore the embarrassing Japanese fetish for boobs bigger than life, Xenoblade Chronicles 2 has a good quality story.

If you ignore this embarrassing Japanese fetishism that manifests itself in boobs over life, and even S & M wears Pyre that has some kind of a combination of halter and tango, the Xenoblade Chronicles 2 actually has a pretty good story. Below these Japanese foolishness, which are strange to us because of differences in cultures, there is an interesting world of the so-called Drivers and Blades, the symbiosis of heroes and his humanoid avatars that give him strength. The relationship between Driver and his Blade is interesting with the concept itself - for example, Blade is immortal until Driver is alive, not vice versa. But this concept is not just a frivolous story but it also has a foothold in the gameplay itself during the fight. 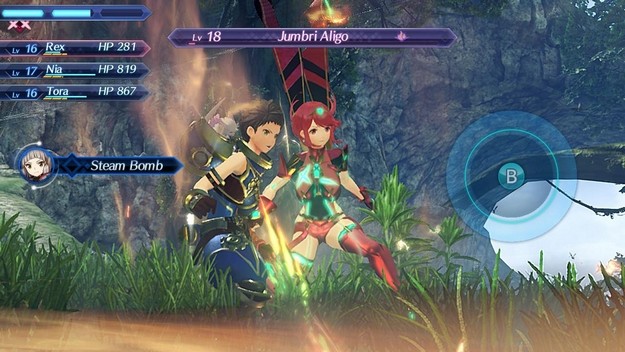 The world of this game is also something wonderful, especially if you meet it for the first time. It has been designed with a lot of imagination, and the game takes you to several different locations where you will see some amazingly impossible constructions, so huge that you will feel like the heaviest ants. Although the characters are mostly childish and comic in Japanese, their stories are mostly interesting in a wider context, which is good because the game does not save on the cutscenes that you can not interrupt. The thing that could possibly be irate to you with the characters is that they speak English in sync with Irish accent. Luckily, you can also change the sound to the original Japanese.

The thing that could possibly be irate to you with the characters is that they speak English in sync with Irish accent.

If your Irish accent does not live during animation, then gameplay is likely to happen because the characters repeatedly repeat one of these phrases whenever something happens. In the fight it is somehow justified because you know who carried out the attack, which is important for the course of the battle. Namely, here is the key to linking different attacks to the combo moves, and it becomes quite chaotic for tracking when 12 or more characters are on the screen. With the visual side, you can manually move the camera away from the image for better viewing. 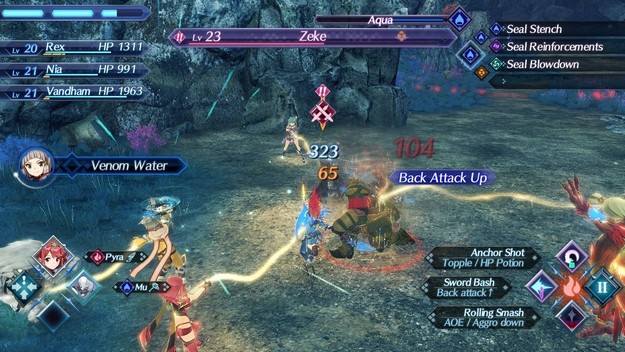 The combat system is not very complicated, but it is extremely stratified, which means there are dozens of things to keep in mind. If you played the previous games in the series, you should not be aware of anything here, but if you enter Xenoblade Chronicles 2 for the first time ... I'm happy for you, I'll just say it. In the battle you control only one character, but you have two members on the team. Basic attacks are performed automatically, and your goal is to place your character close to the enemy, so that in doing so, he does not lose his connection to his Blade.

If you enter the Xenoblade Chronicles 2 for the first time ... good luck, you will need it.

The basic attacks are filled with three special attacks, and they are full of one more special, based on elements - fire, water, air, earth. By performing this particular attack, you unlock a list of possible comboes, which you must use versatile as enemies develop resistance to them. You can use combo moves only when you have a full meter for them, and when it's full to the end you can also use the so-called. chain attack which is a series of QTE sequences with the accumulated damage that your characters achieve. In addition, you also have especially special types of attacks such as break, topple, launch, and smash, which can exploit the weaknesses of the enemy. In addition to all this, you need to keep an eye on the roles of your fellow (classic tank, healer, DPS, etc.), you have to work buffs with different items, etc., etc. 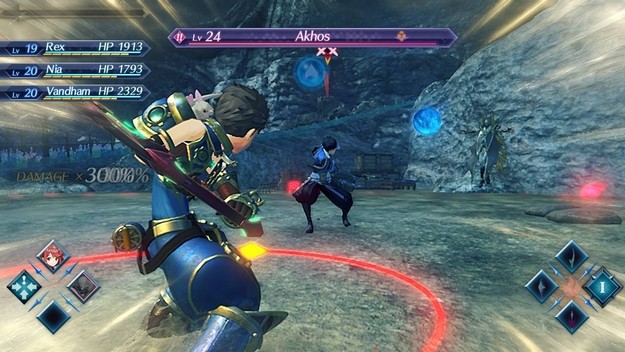 Instructions for playing appear only once, and later you have to pay for them.

To make matters even worse, it is not easy to get even out of combat - when upgrading the characters. First you can upgrade your special attacks, then your Blade's weapon, then you have upgrades for yourself and upgrades for your Blade bets, but you can choose your own manually while Blade upgrades are upgraded automatically, but only when you go into it for me ... Then you have a system upgrade for yourself and AUX core for Blade, with the equipment you can use without limiting the level, but the AUX core needs to be cleaned first (or something) so you can use it. 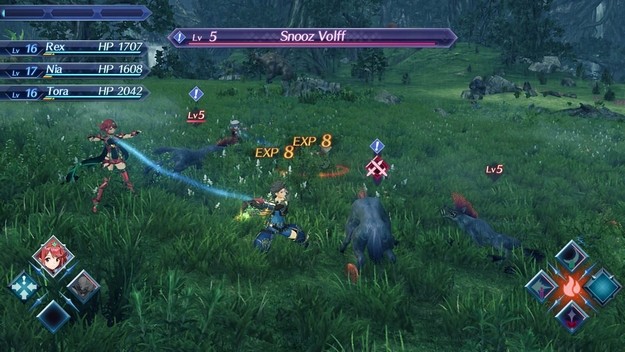 And all I've just described is not the main level up system, but somewhat, because you have to go to the hotel and hang up to raise the level for the main thrust and increase the statistics of the character. Again, it's not that complicated when it comes to the whole thing, but it's unnecessarily intricate, since there's no reason why Driver Levels should not rise automatically, or why Blade's perks should not activate without getting into me for that.

Once you understand how all things work in Xenoblade Chronicles 2, the game becomes pretty interesting. Every fight is tough. The enemy has a lot and each species has its own specific attack, due to which you must approach the fight seriously, combining different elements and Blades for maximum performance. The penalty for dying is not draconian, but the game just returns you to the last checkpoint. The worst thing is that your opponents react after your failure, and to some point you have to repeat at least 2-3 battles to get back to the one you fell into. 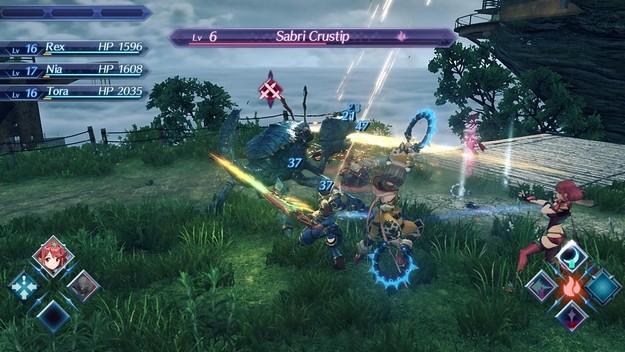 It did not happen to me once to run a battle against an equal opponent, and then a monster appears to be making a minced meat of my characters.

If you think it's broken, wait for me to describe what kind of secondary tasks in this game. In short, the worst I've had the opportunity to see lately. Most of them are based on the principle that you must find and pick up certain items / materials for someone. Aside from the fact that behind these tasks there is very little or no story, that is, context, it is embarrassing that the collection of these objects is based on the RNG system, or randomness. You can get the items you need to complete the quest relatively quickly, but you can grind them for three hours without finding what you need. To make things worse, some side things are interconnected, so without completing one you can not earn a reward for the other; although you have already finished with another. 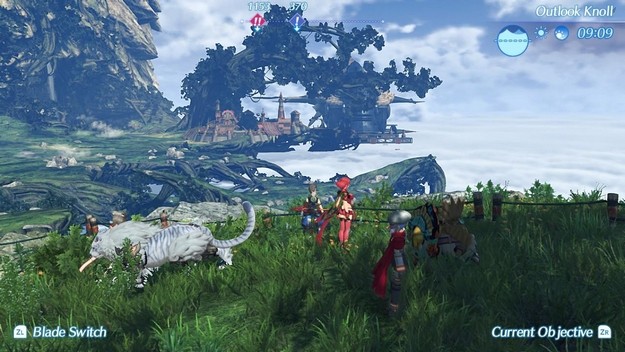 The worlds are quite large and leave room for exploration, and in some cases they are expanding depending on weather conditions.

Unfortunately, the expansion of huge maps unfortunately does not support finding them. The mini-map is terrible and practically useless (it spreads through the entire screen and there is still limited visibility), but that part of the game should somewhat be corrected through the next update in the 1st month so I will not take it as a minus. On the other hand, a quick trip to the map is catastrophic since the locations are divided by a number of regions that are difficult to identify from one another. 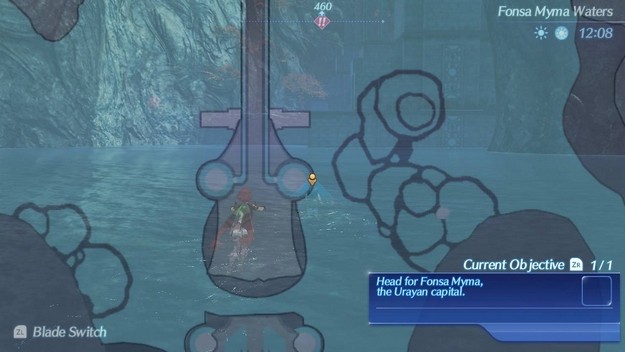 The resolution in the game sometimes drops so low that some games for the PlayStation 2 had a sharper image of the Xenoblade Chronicle 2.

Fortunately, the adaptive resolution at least helps the game rotate in a stable number of frames per second. At best, the XC2 can look like one of the more beautiful Games platforms, but this is more helpful than its visual style than the technical foundation. And I do not mean huge boobs, but for a complete presentation that looks like an animated film. 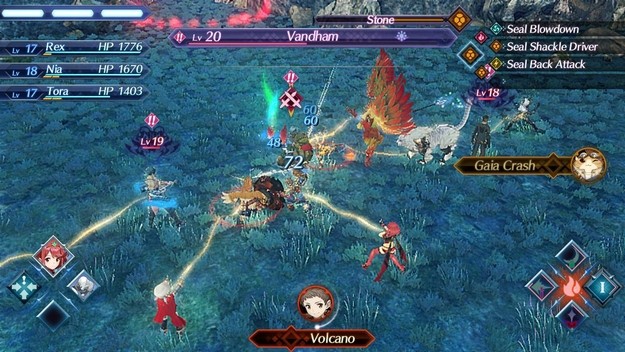 Xenoblade Chronicles 2 is a game that is worth playing for an interesting story and a huge amount of content. But, unlike the first part, it's not the best jRPG today has to offer.

try to make another artilce bro

This article make me want to play this game. Nice article.