Rate this article "Witch It the Action Hide & Seek Game"

Hey, I'm Terra and I'm writing some stuff about my favorite game, Witch It, an Online Multiplayer Hide and Seek Game, created by Barrel Roll Games and published by Deadalic Entertainment.

Witch It is a Hide and Seek game, with four diffrent gamemodes, first, there's the typical Hide and Seek Gamemode, Hunters, with ranged and melee weapons, hunting down Witches, that are able to transform into Props, who are laying all over the map. When a Witch gets caugth, the player becomes a Spectator till the round's finished.

Second, we have a Gamemode called Mobification. It's just like Hide and Seek, except that, when a Witch gets caugth, it becomes a Hunter and also beginns to hunt down other Witches.

Third Gamemode is in WIP (Work in Progress) Status. Hunt a Hag is a Gamemode without any special Skills, ranged weapons and transformation. It's like playing catch.

Fourth Gamemode, also in WIP Status, is called Fill a Pot and like the name sais, Witches have to fill diffrent Pots with selected Props, Hunters just have to stop the Witches (as always).

Hunters and Witches, both have five Special Skills, of which they can equip two at once, they have to choose between three Utility Skills and two movement Skills. 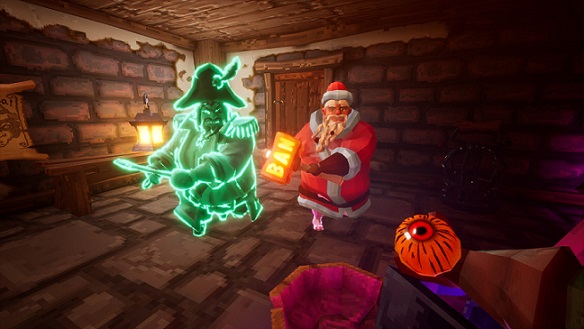 Chicken
"Send Out" your loyal chicken. Due to its fine senses it will alert you if a Witch is nearby. It will observe the area for ten seconds.
Cooldown: 10s

Magic Blocker
The Magic Blocker creates a zone every Witch wants to avoid under all circumstances. Within the zone no magic can be casted for ten seconds.
Cooldown: 8s

Vacuum Trap
Alongside its functionality to pull and to reveal all props within its area, this tool will apply a 'slow' to every Witch it is pulling and will drain mana.
Cooldown: 8s

Hook
Use the Hook,to reach roofs and other high spots.
Cooldown: 5s 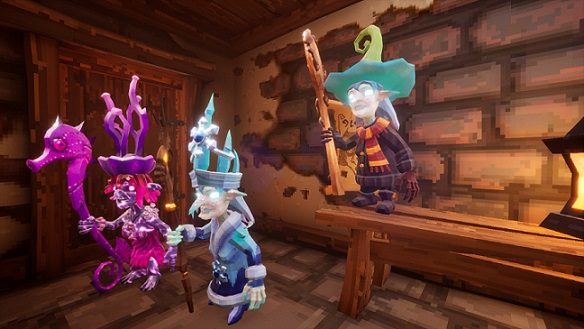 Decoy
Summon and control a decoy to fool Hunters.

Mushroom
Throw a spore of a toxic mushroom. When the spore hits something, a mushroom will grow and three additional spores will split off and bounce into different directions, causing three more mushrooms to grow. Each mushroom lasts for seven seconds. If a Hunter steps into a mushroom, "Confusion" will be applied and the mushroom will be consumed, "Confusion" lasts for four seconds.
Cooldown: 3s

Clingy Luaq
Summon a Luaq, which is only visible to witches and will grow its speed and range over time. If it hits a Hunter, he will get spooked and become distracted.
Cooldown: 1.5s


Over time, many new things have been added, there's a crafting system, loads of Character Costumisation Items, Maps and so on...
Items are also collected in your Steam Inventory, Tradeable, not marktable.
Well, that's it for now, maybe there'll come more. If you're interested,

Witch It on Steam: https://store.steampowered.com/app/559650/Witch_It/

If you have any questions for the Devs
Official Witch It Discord: https://discord.gg/TJnZDHF

Rate this article Witch It the Action Hide & Seek Game

Short but good for a review, just check on some of that grammar and you'd go far there buddyool hame dont stop ;)his is the first one that seems descent good job OP !wow so good

maybe i try to play this game