Rate this article "Why everyone hates Teemo-The Swift Scout?"

Why everyone hates Teemo-The Swift Scout?

Teemo is a league of legends satan.

Today I am going to review a league of legends champion called teemo. What’s so special about teemo and who is teemo?look at the picture of teemo- 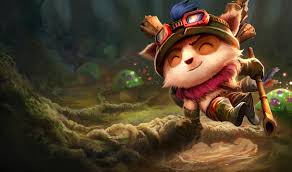 so what do you think? Teemo is a cute little squirrel . This is the picture riot uses to present teemo to us.but I think teemo should have looked like this- 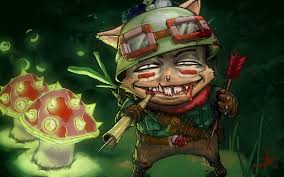 Teemo is the face of evil in league of legends. There are many reasons why every league of legends player hates this champion. Since teemo was released he gained a lot of hate by everyone  because teemo is the most frustrating or one of the most frustrating champions to play against in laning phase. He makes his enemies tilt and sometimes even his own teammates hate him resulting few of them reporting him.

Teemo’s passive- Guerrilla warfare
Every time teemo stands still he gains Invisibility but he has to stand still for at least 1.5 seconds without moving or attacking. If he doesn’t move he can be Invisible for the rest of the game. Now comes the most annoying part of his passive. When teemo goes into a bush he gains invisibility in 0.75 second and he can move freely in the bush while he is camouflaged. You might think what’s so annoying about teemo gaining invisibility. The only reason why this passive is annoying is because after your camouflaged, your enemies cannot auto attack you and also cannot see you.  If your enemy is a skill shot champion, they can randomly use their skill shots and try to hit you but they won’t be sure if they are hitting you or not. If you see a enemy ganking your lane you can just go into a bush and dodge the gank as they can’t hit or see you.
When teemo moves and breaks his stealth, he gains Element of Surprise for 3 seconds, granting him 20 / 40 / 60 / 80% bonus attack speed. You can use your extra attack speed to kill a champion a lot easier.

It is a targeted ability. So there is no chance of you missing your target. When you use this ability or press your q button on your keyboard you see a target cursor on your monitor and then drag the cursor to your enemy and press left mouse button to use your ability. Teemo throws a blinding dark which deals magic damage (80 / 125 / 170 / 215 / 260 (+ 80% AP) to your enemy and blinds them for a short duration(1.5 / 1.75 / 2 / 2.25 / 2.5).  After you blind your targeted enemy, they will miss their next one auto attack or two which is very annoying because when they are blind and miss their attacks , they can be dead instead of teemo because of the blind. Some people rage at this because one auto attack that they misses could have killed teemo but they die instead of teemo because of the blind .

Teemo’s w-Move Quick-
There are 2 parts of this ability. One is passive and the other one is active.

Passive-Whenever teemo doesn’t takes damage from champions or turrets for 5 seconds he gains extra movement speed(10 / 14 / 18 / 22 / 26%). This ability helps you catch a enemy champion with low health points and also can help you escape.

Active-When teemo uses this ability, he gains double of his movement speed for 3 seconds. This ability allows teemo to escape from fights and run for his life. So basically you can kill someone and escape from the others like a boss or you can take damage and run away easily.

Teemo’s e-Toxic shot-
Here’s another ability which makes one tilted. This ability only got it’s passive meaning you can’t use it. Whenever teemo auto attacks a enemy champions/minions/monster, teemo deals bonus magic damage (10 / 20 / 30 / 40 / 50 (+ 30% AP) and poison his target. Poisoned targets suffer magic damage(6 / 12 / 18 / 24 / 30 (+ 10% AP)  for 4 seconds. So even after you escape with low health points after a fight, teemo’s poison may kill you But please don’t uninstall the game because of this.

This is teemo’s ultimate ability and his most annoying ability. Whenever you see a enemy teemo you should expect a minefield of shrooms(mushrooms). Teemo tosses a mushroom trap on the ground which lasts up to 5 minutes. When enemy champions or minions steps on his mushrooms, it explodes poisoning every enemy champions/minions and deals heavy magic damage(50 / 81.25 / 112.5 (+ 12.5% AP) per seconds which lasts up to 4 seconds, also granting sight of them. When teemo tosses a mushroom on top of a mushroom, it bounces to a short distance. Teemo can place as many mushroom as he wants until he meets his cooldown. In big teamfights every enemy champions can suffer from heavy magic damage if they steps on his mushrooms resulting their defeat in teamfights.

I think I know how it feels to lane against teemo because I personally hate teemo. No matter how much people hates him, he is really fun to play with. I hate to lane against a teemo but I enjoy teemo when I play him and sometimes my laner rage quits or switches lane. Teemo is really easy to play so everybody can play him and if someone masters him, then you can already tell how annoyed his enemies will be to play against a mastered teemo player. But anyway he’s really fun to play and he only costs 1350 BE in preseason 8. But I really hate him lol.

Rate this article Why everyone hates Teemo-The Swift Scout?

Get your reward League of Legends

What a great article

if get hit by a teemo mushroom...i get my hands out of my mouse and keybord...its instand deth xd

I am main teemo