Many of us are probably waiting to see the release of Diablo: Immortal and see how Blizzard will adapt the series on smartphones. To be honest, I have been pretty disappointed with Diablo 3. I can’t say what exactly was wrong but it just couldn’t keep me playing it more than 2 months, while on the second game of the series I have spent years. So I have decided to review a clone game of Diablo, that in my opinion is far more worth playing than Diablo 3 itself.

Torchlight II is an action hack and slash roleplaying game. It was developed and released by Runic Games for Windows, back on September 20, 2012. 3 years later, version for Linux OS also arrived.  This title is Diablo 2 clone and many similarities between these two can be found.

The first Torchlight received a lot of positive feedback. The only negative comments were towards its lack of Multiplayer mode.  Because of that the sequel’s first idea was to be a MMO game. However Runic Games gave up on that, in order to make the game release sooner than expected. 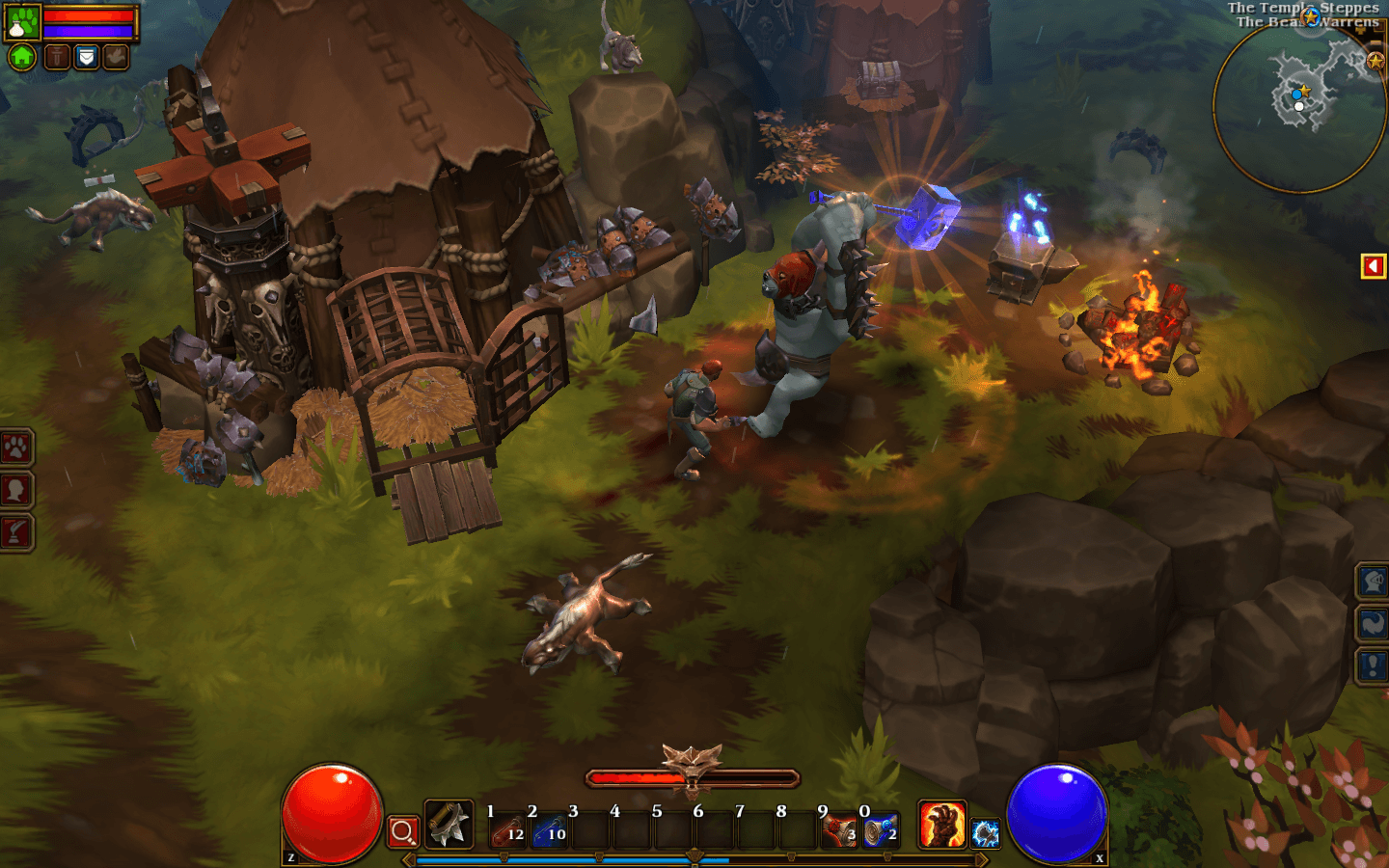 The story is set in a fantasy world, several years after the events in the first game. The Alchemist, a playable character in Torchlight I, became corrupted by the remaining evil inside the Heart of Ordrak. He became the new villain of the story that desperately tries to disturb the balance between the six elements in this world.

but new heroes will raise!...”

You take the role of a hero from this game’s quote. Your adventures goes battling through 3 Acts and 1 Epilogue chapter, as you will try to take down the corrupted Alchemist and his forces.

Hack and slash dungeon crawler RPG title. The camera is locked and cannot be freely rotated by 360 degrees, which gives the game isometric 2d view. Using the mouse wheel, players can only manipulate the camera by zooming in and out the view.

Interface is same as the one found in Diablo series. On the middle bottom screen you will find your character’s health and mana pool, made as spheres. Between them are the skills and consumable items boxes, where you set them and use by pressing the corresponding number key from the keyboard.

You navigate your character’s movement only with the mouse with the ability to cast 2 skill attacks by each of the mouse buttons. There is nice option for ranged type attacks, where you can hold CTRL key and cast skill from the mouse, making your character to stay in one place and keep the distance from the enemies. 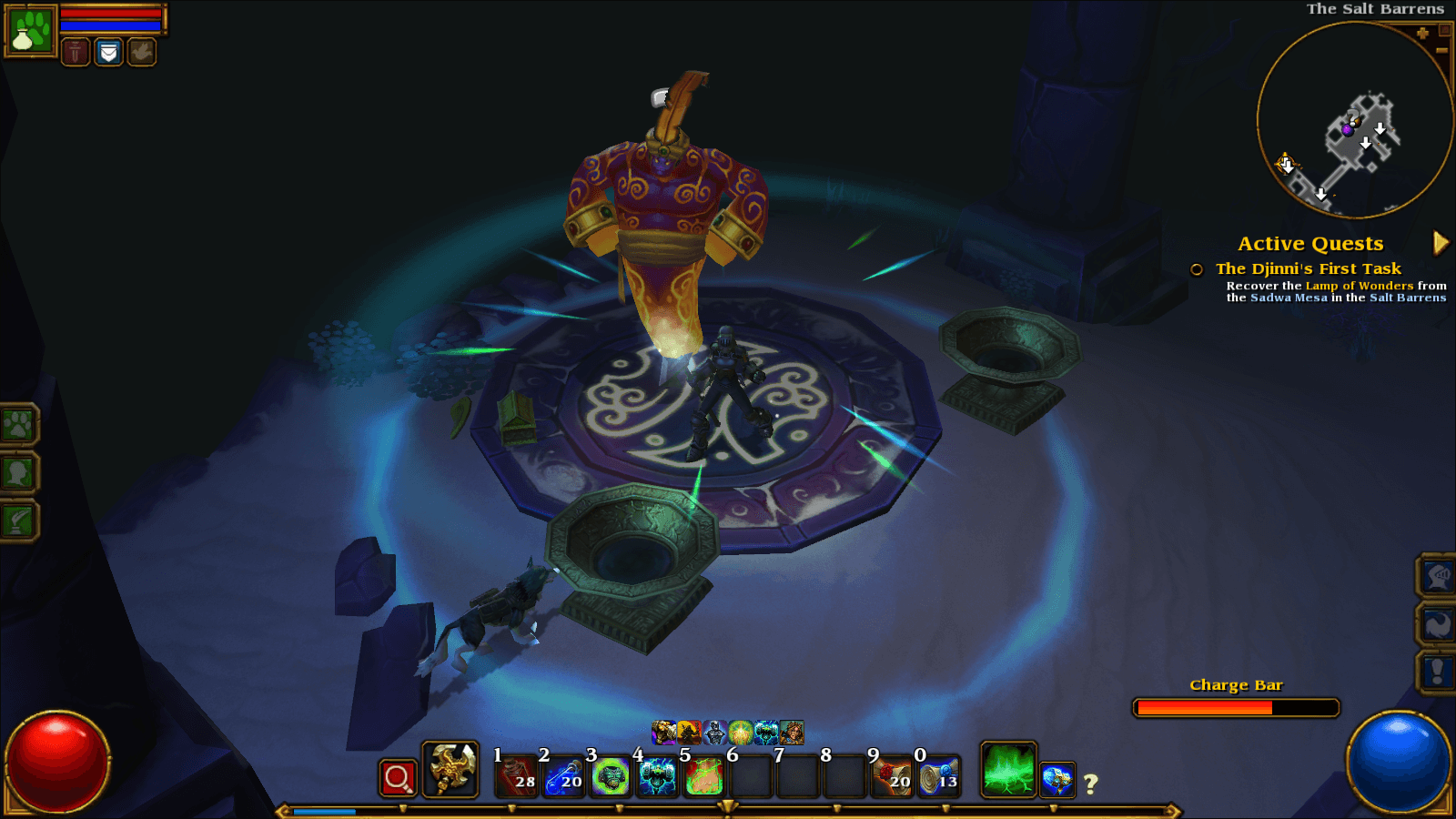 Torchlight II offers 4 playable classes. They aren’t gender locked and have both male and female versions. Players can pick one among the following classes:

Embermage – This is the spellcaster class in this game. Uses high elemental damage spells. Elemental damage itself can come as : Fire, Cold, Lighting, Poison. Every can make different effect. For example the cold can slow enemies, fire has a chance to cause dots (damage over time). Embermage can be built in different skill trees: Inferno, Frost, Storm.

Berserker – The fighter. Weaker on tanking and surviving but delivering more damage than the Engineer class.  His skill trees are: Hunter, Tundra, Shadow.

Each class can be built in 3 different  builds, offering different gameplay. There is NPC, found in the town maps, that can reset the skill points used. That way we can switch between different skill trees anytime and make our gear drops stats  to suit best. Except the skills found in the different trees, there are also some that drop as scrolls during game, and can be used by every class. We are given 3 slots to equip such. For example the one, I have found, was able to summon some skeleton archers.

Shortly after finishing creation of our hero, we will be given the task to create a pet. Pets are nice addon to the gameplay as we can use their separate inventory slots to store items, make them pick item drop for us, or simply aiding by attacking enemies.

Here I won’t go in details, as mechanics are pretty much same as in Diablo series. However some differences can be noted. First I have found is, that here every class can dual-wield  one handed weapons. This gives a chance for launching an attack from both in same time. Also gears in Torchlight II don’t have durability. Hooray for one less thing to spend our earned gold on repairing them. 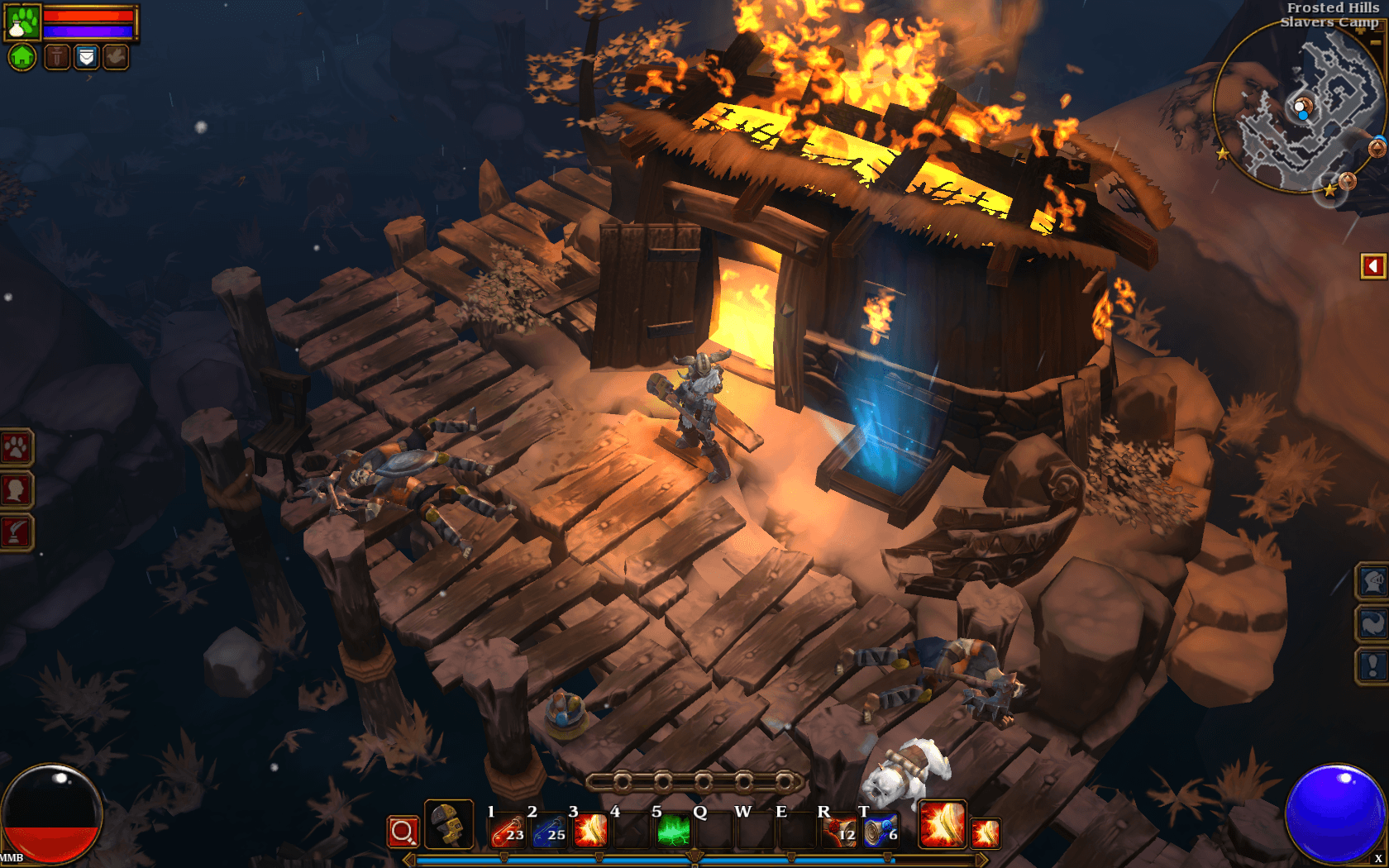 Same gear grade and drop system used in Diablo. Gears have different colors according to their grade.

Blue – Magical ones. They give more stat boost compared to the previous two types.

Purple – These are the items classified as quest drops.

Gears may have sockets, in which players can put different kind of gems. Gems also have different grades. Also each gear can be enhanced at NPC giving a new stat or effect prefix. MF gears can be found. These ones were popular in Diablo 2 for increasing your chance to get better grade items drop after killing an enemy.

The monster database is huge. Here we will encounter different kind of enemies from hordes of skeletons, zombies, goblins to ferocious manticores. Aside from the boss monsters, that we have to take down in order to progress with the storyline, there are also champion type enemies. This type is stronger than the regular monsters and also the chance to get higher grade of items from it is bigger.

For a game that came back in 2012, I must say the graphic is quite well made and detailed. Playing on different resolution with different detail level can be modified through the game’s settings. The artwork is cartoon’s style, making Torchlight II visuals closer to Warcraft than Diablo series.

Players can enjoy exploring many different kinds of vast landscapes such as: frozen regions, deserts, forests, dungeons, caves and more. Some maps can offer hidden areas, that aren’t shown on the radar, making the exploration more exciting.

Dynamic animation can be seen at many different environment features, such as burning torches, houses or waves in rivers, ponds. 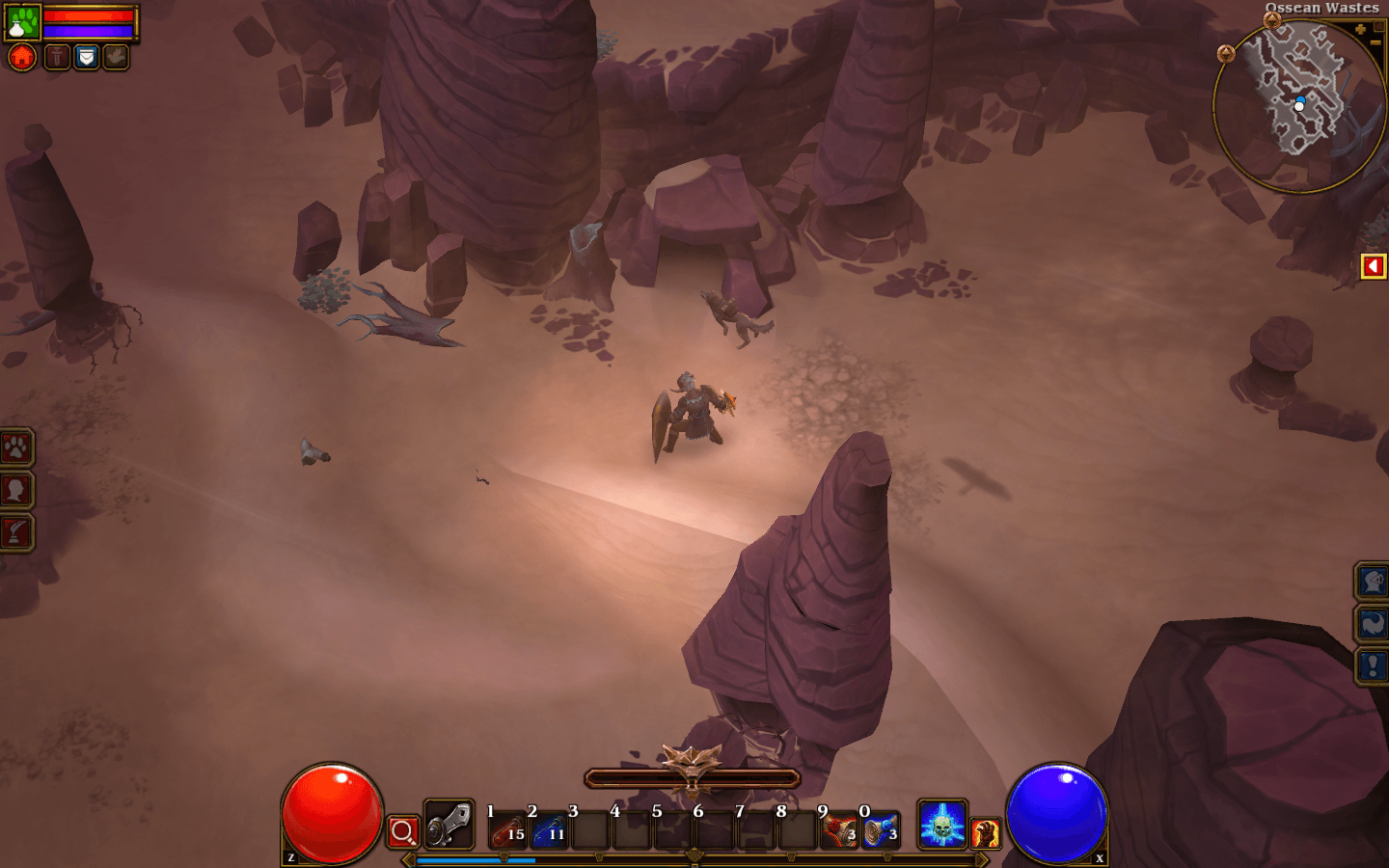 Ambient tracks combining different acoustic, synth and animal sounds. It is similar to the one in Diablo2, and it matches the atmosphere of the different maps perfectly. All tracks can be found in the game installation folder in .ogg format. Getting software that works with such, gives players ability to listen to them at any time.

Missing this feature in Torchlight I, now players can gather friends and play together via LAN or Internet. It was pleasant surprise for me, that no matter this game is almost 7 years old, I actually could find active players and their games at present day. We can choose to play among one of the 4 difficulties the game offers. But beware, playing multiplayer itself increases the monster stat more for every person who will enter the same game. Nice challenge. The multiplayer’s loot system is very friendly, because there isn’t any loot stealing or item bet for distributing among players. Everyone gets his own item drop that only he sees on his screen.

Another nice feature is the MOD support that developers gave. When we get bored we can browse the internet and find custom-made mod. Playing new quests, fighting through different maps, the adventure never ends. Such is the Synergy Mod that can be downloaded for this game.

Software and resources are available across the internet, so we can even make our own mod.

Playing Torchlight II gave me more exciting experience and even I felt more like playing continuation of Diablo 2. I became curious and looked what are the future plans of the developers for this title. I have found that many stuff happened since this game was released. Some of the crew behind it left Runic Games, and shortly after the company was closed. The game was putted on steam and it actually costs some money to be purchased. However there is also DRM version, which is completely free to play.

The future isn’t so dark anyway. Since Max Schaefer announced Echtra Games, the same person gathered developers from Blizzard North and former Runic Games. It was announced that a title, Torchlight Frontiers, will be released in 2019. The saga will become Trilogy, but the more interesting thing is that will present the original idea of Torchlight 2 and be MMORPG game. I am looking forward to it.

The game doesn't require much of system resources, so even people with less expensive machines can enjoy playing it. The DRM free version was available till October 2017, but copies of it can probably be found somewhere via the Internet.

The account for Internet Multiplayer mode and mod resources can be found on the official site: https://www.runicgames.com/torchlight2/.

The screenshots and the video used in this article are taken from the official site of the game and I do not own the rights for them.

I remember this game back then, was a fun ride.

Good good! I'm getting some new ideas for my article

Good job man. I wish I could write like that

Torchlight 2 is a continuation of a great game!

Nice work and keep up the good work

Nice article! I like the way you wrote the story... the game sounds to be a really good one, but to be honest, I wouldn't give it a try (it's a matter of taste, as well).