Rate this article "The Textorcist: The Story of Ray Bibbia Review"

The Textorcist: The Story of Ray Bibbia Review

The Textorcist: The Story of Ray Bibbia is a bullet-hell typing game which follows the story of a private exorcist named Ray Bibbia as he fights a demonic outbreak across Rome. The game was developed by the Italian studio Morbidware and published by Headup Games and was released on February 14, 2019 and is available nearly all platforms.

STORY
The story takes place in an alternate late 90's Rome, where the church has gained power over the city. The protagonist of the story and the character you'll be playing as is Ray Bibbia, a former priest and private exorcist. Throughout the story, Ray will uncover secrets about the church and his past as he battles through the city to destroy the demonic menace that plagues it. Although not as intricate or thought out as other games, the story itself is not bad and does its job fairly well, with twists that keep the player wanting to know more and surprisingly hilarious dark humor to keep them entertained. That being said, I believe that they can do a much better job with the story. 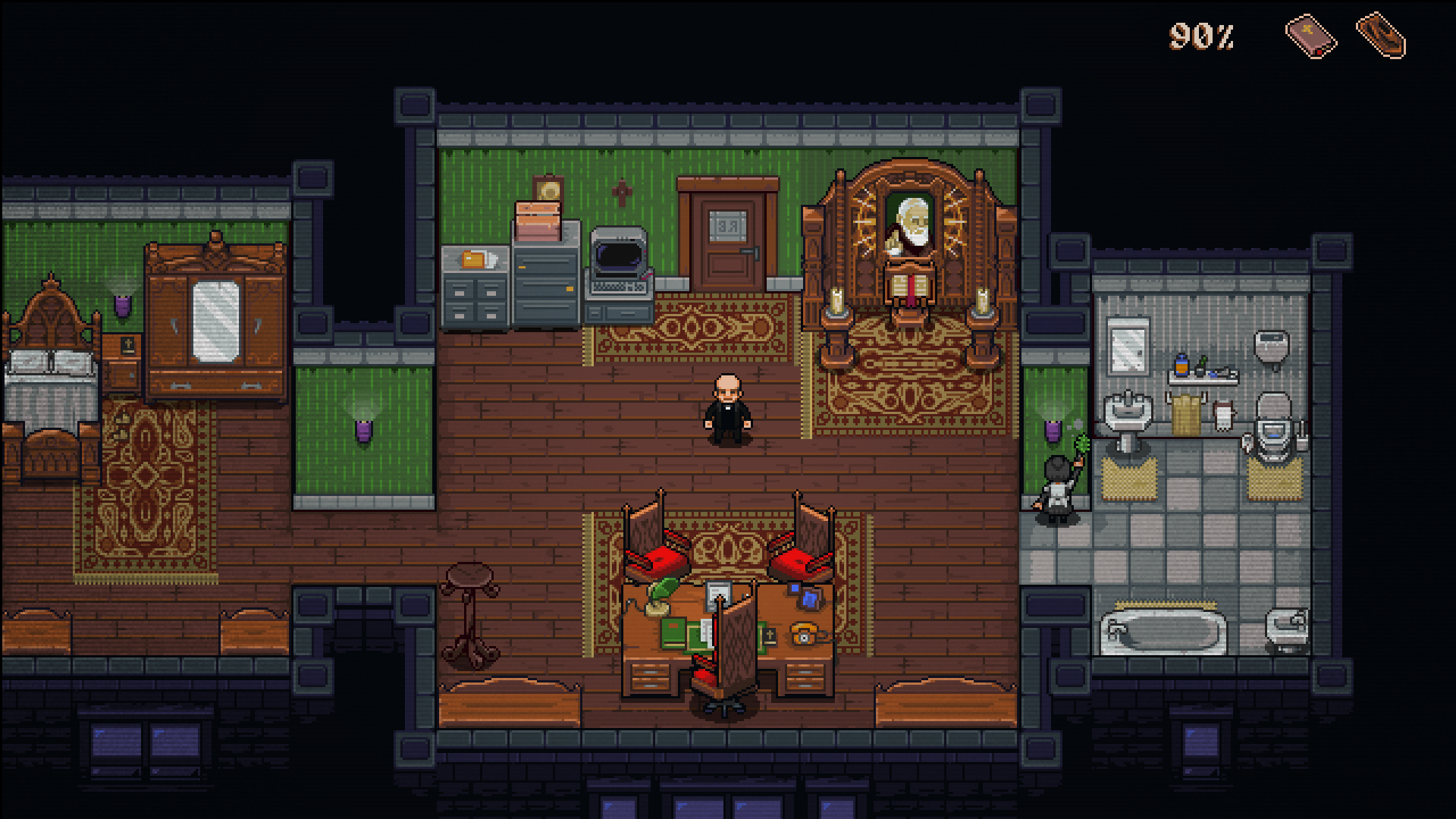 ART
As for the look of the game, the design team did a splendid job on the Textorcist. The pixel art of the game helps to sell the retro style of the game. The
areas of the game look great, ranging from Rome's alleys and an ala The Exorcist themed rooms to heavy metal vegan rock concerts grand cathedrals and other places I can't explain. The thing that stood out to me design-wise however, were the bosses. The bosses in the game looked fantastic and honestly exceeded my expectations. Each one had a distinct feel to them and the animations oozed personality. For a relatively unknown company, they sure can make amazing art. 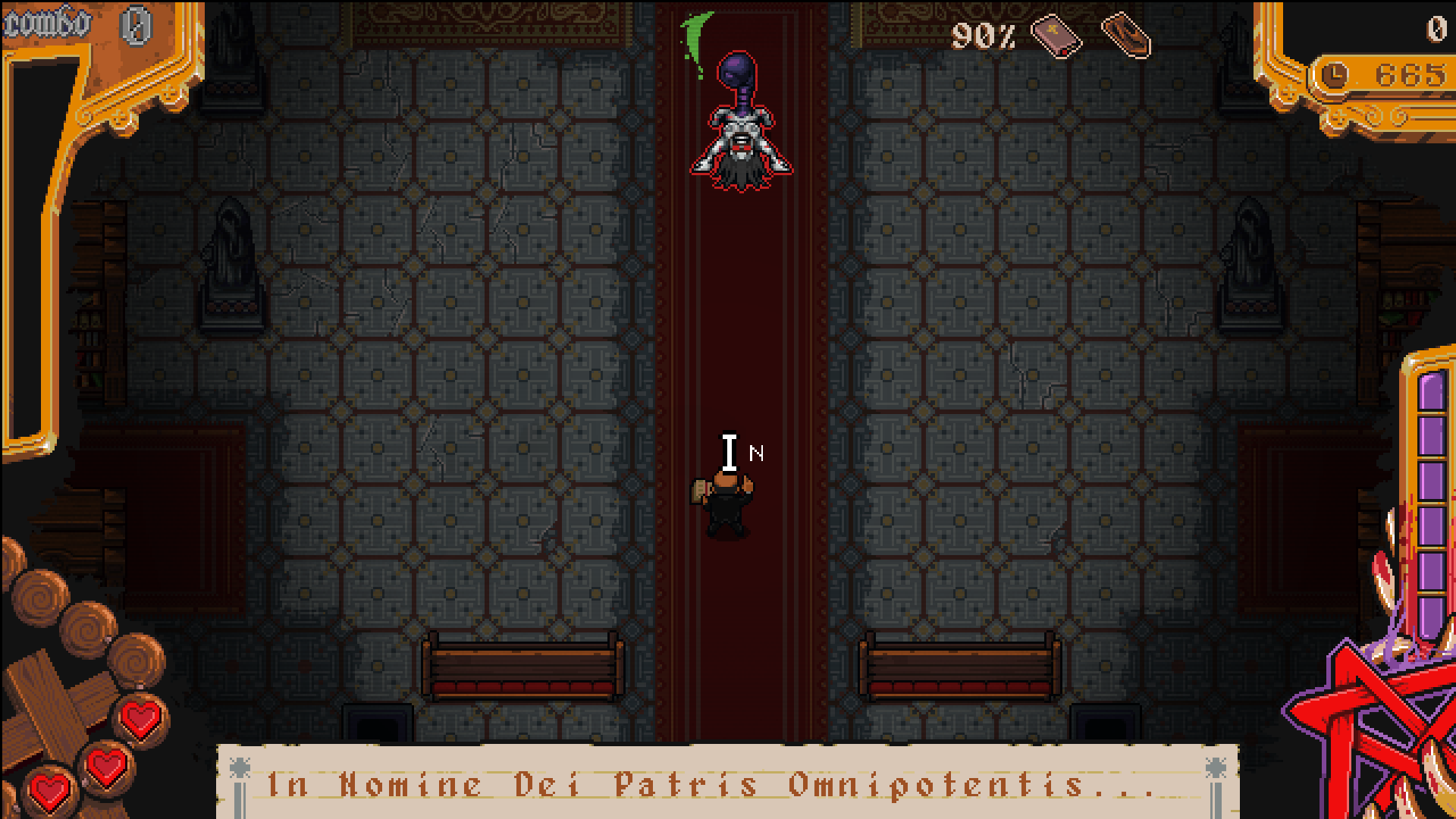 SOUNDTRACK
The soundtrack of the game deserves some praise too. The music of the game contributed heavily to the retro style the game was hoping to achieve with its dark synthwave and heavy metal inspired tracks. Each song in the game is a blast to listen and is a testament to the skill of GosT as a composer. 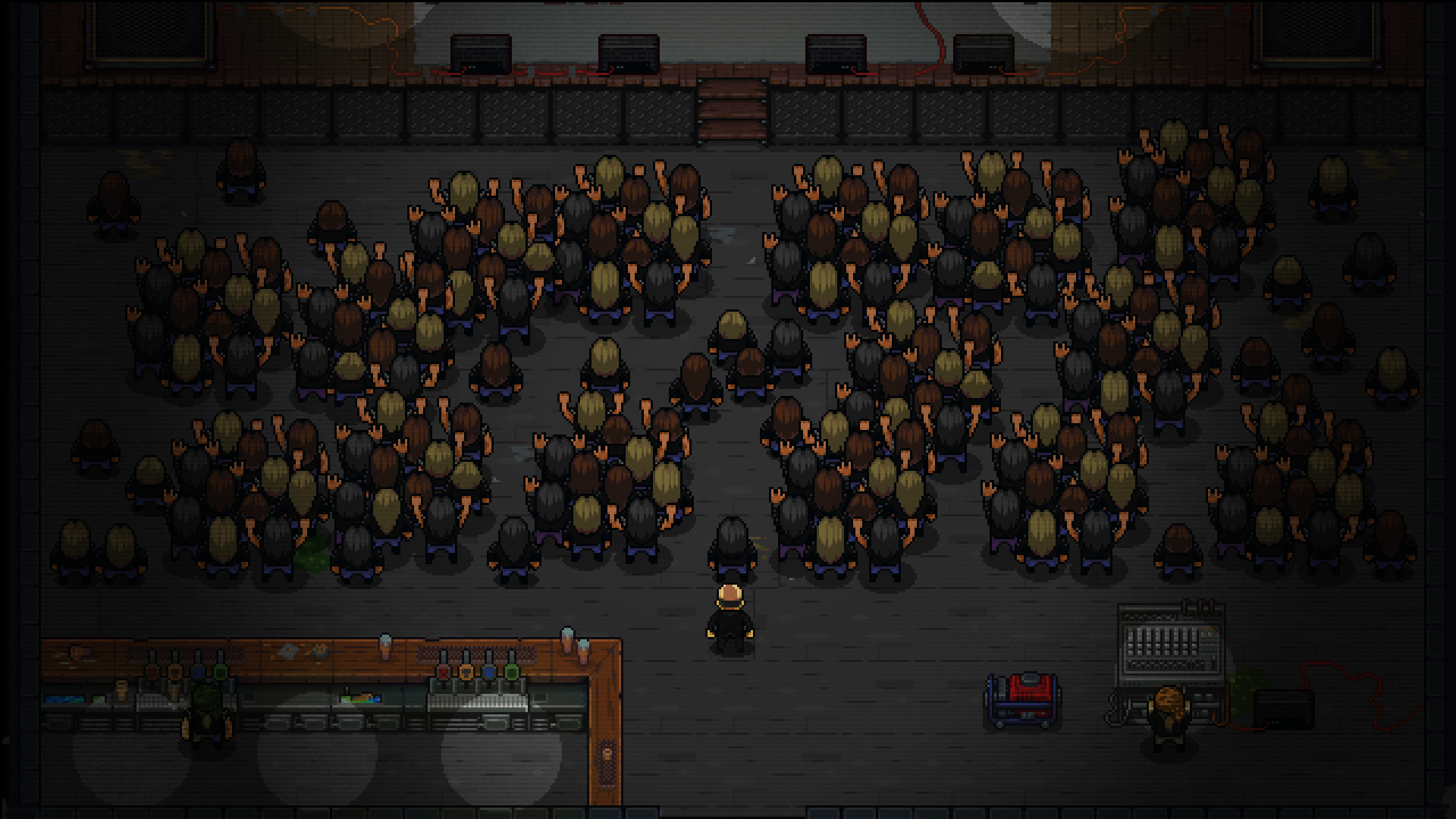 GAMEPLAY
While the art, music, and story might all be good, the thing that most people noticed about the game is its gameplay, more specifically its bullet-hell typing mechanics. As a huge fan of bullet-hell games, this was definitely a welcome idea as the genre has become a little bit stale with repetitive mechanics. Seeing a game that mixes it with a lesser known genre like typing games was certainly interesting and new. So, does it work? Hell yes!
The gameplay is great as it takes the best from both genres and utilizes it excellently. The core game mechanics create a difficult challenge for the player as it can be quite hard typing words while dodging a hail of bullets, but never did I feel that typing aspect of the game was holding me back. This is because the pace of the game isn't as fast as traditional bullet-hell games. The boss fights are designed so that players get multiple windows to rush in words before sending them back into action. That being said, I do have some issues. First is that items and trinkets are mostly useless since they don't add anything significant to the players advantage. The second is that the navigating through the story is tedious and gets boring easily. Lastly, the difficulty spike. Around midway through the game, the difficulty increases significantly as the windows of opportunity shrink and the pace becomes faster, making the game feel unbeatable for some.

VERDICT
Overall the game showcases an interesting take into an oversaturated genre and pulls it off well. The art direction and soundtrack of the game are definitely amazing and was the most overachieving part of the game. That being said, the story is decent and sometimes funny, but underwhelming, and the gameplay can become tedious as the game progressively increases in difficulty and some of the mechanics were definitely wasted. Overall, this game is a 8/10 for me. Go check it out, it's free on the Epic Games store. You won't regret it.

Rate this article The Textorcist: The Story of Ray Bibbia Review

This game is super fun but too hard, i mean, how do i suppose to type such weird words while dodging those bullets?

I was just curious. I can't be sure, but looking at the screen shots I wonder if this was made using RpgMaker. Does anyone know? Thanks.

This game is actually pretty fun in my opinion

The soundtrack of the game deserves some praise too. The music of the game contributed heavily to the retro style the game was hoping to achieve with its dark synthwave and heavy metal inspired tracks. Each song in the game is a blast to listen and is a testament to the skill of GosT as a composer writes

Looks like a RPG game to me (probably is), however your article is outstanding and the game by the looks of it is really fun, although I haven't tried it out for myself I may do so later just so I can understand a bit more if its really worth playing.

I can agree with dakuwanga, though this would be just another copy paste merely for some soul gems, but it's an actual in depth review, do inmost next please, I'm still trying to decide if i should play it or not

The art is incredibly unique as is the background story I will be sure to check out the game in the future. The writng in the article has no flaw and believe it to be flawlessly written.
I approve!

i think i really admire the people who think to makes this kind of game .because its way of learning to and feel being a part of the story by plaYING this game.. amazingg..

The game is indeed pretty fun when you get into the depths of things and I would reccomend you to play it at any opportunity you've got.