The Super Smash Bros series would be a perfect example of a dual personality. He is cheerful and happy for the masses. With a million known characters, songs and arena. Colorful colors, action at every step, guaranteed entertainment for the family, colleagues, friends and everything in the studio and direction. But there is also its "dark" side, a part that is consistently trying to hide behind the whole glittering. The part that has been pulled from the early GameCube of youth, primarily thanks to its imperfections. Because it was because of his faults and mistakes in the code, he became appreciated among "them". Notorious competitive players.

Super Smash Bros. The Ultimate Fifth is part of a popular series where the forces are measured by fighters from different franchises. The goal of the fight is to throw an opponent out of the arena. The characters who received more damage are still flying and are more susceptible to ejection. The game is available for the Nintendo Switch.

Nintendo has always wanted to promote Super Smash Bros. series as a game for the masses. A product that can be played by any person who can control the controller. In that desire to show how much the game is affordable, usually there are some moves that ignore a smaller but highly fierce group of competitive players. 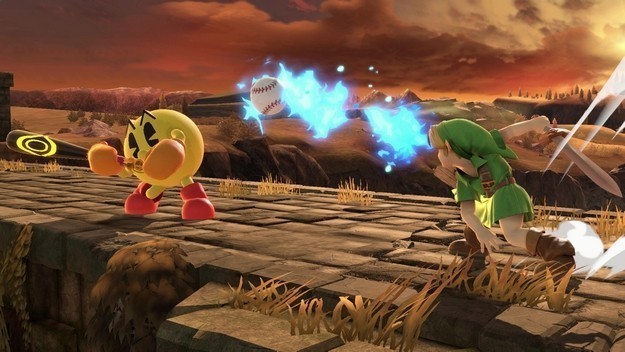 With a set of circumstances, I played an online match with an experienced colleague and by the way I used voice chat. Through this tenth battle, I found out from the inmate more information about the air strikes. More effective ways to get your opponent out. So many tiny but important information that helped me in the long run in my playing.

This is an obvious example of neglecting the competitive scene and turning the mass. Because why scare the mass with a million possible types of attacks and options. Let the competitive players reveal themselves all the magic that is hidden under the lid. Cake for masses! But it's hard to take too much stuff too much for the Super Smash Bros. Ultimate is first of all - fun.

There is a natural standard Smash mode for local online fighting. Choose your character and opt for one of three types of combat.
The game for local multiplayer offers a handful of options to setup. 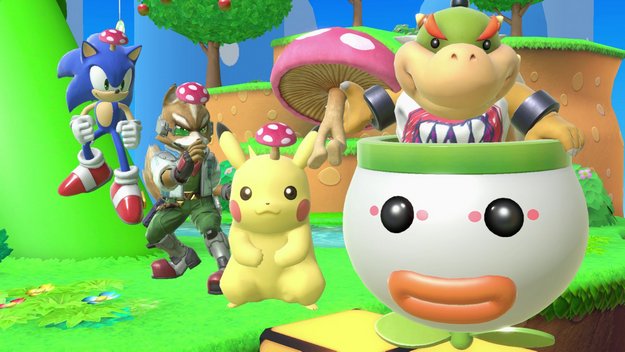 You can insert items in the map that give you certain options. Or invite a subordinate to help you fight. A special assault of Final Smash is obtained by filling the bar or hitting Smash balls. All these options can be turned on or off, and you create a version of entertainment for yourself.

After a certain moment, so much will happen on the screen that you will sometimes forget about your character who falls outside the folder. Local cooperative mode offers the ability to fight up to eight players. Also, do not try to play in the handheld mode in major combat. The combination of a small screen, a multitude of characters and a million effects is simply incompatible.

"Do not even try to play big hand in the handheld mode." 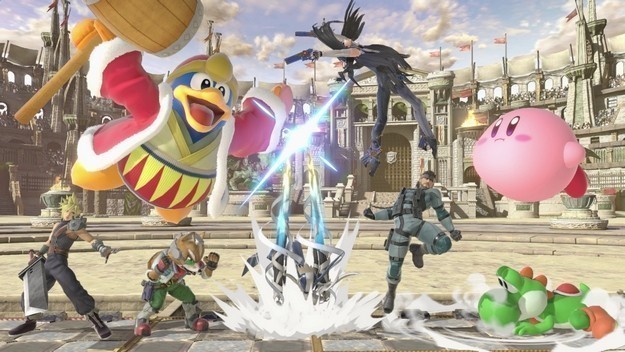 For local entertainment there are also Squad Strike matches 3v3 or 5v5. The winner is of course the last player to stay with one of the selected characters. . Interesting is the Smashdown mode in which you must change the character of each fight, and you can not use it anymore.

There is already a standard Classic mode where we have to cross the game with six faces, one platformer level and ultimately deal with the main boss. If you need some place to practice your played combinations, Training Mode will surely help you in that. For those bold and eager proofs there is also Mob Smash, a sort of survival mode.

"The central mode is called the World of Light and is the biggest mod since the series." 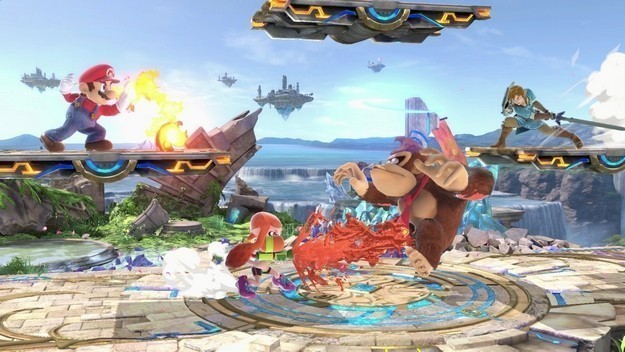 And it remained to mention just one more, but that's why the gigantic great mode behind the name of the World of Light. It is the main mode of the story, where the villain Galeem with one stroke turns all fighters into Spirits. And so we start our adventure, with little Kirby on a huge map. By moving through the map we reach other Spirits that block our path. Once we win them, we get these characters permanently and we open a new path.
There are two types of Spirits, active and passive. The same before each fight we can add to our fighter and change his skills. While the active Spirit increases our strength and certain type of attack or defense, passive Spirits give us new opportunities. Resistance to a poison map, a decrease in gravity for a larger leap, or a weapon awarded since the start are just some of the possibilities of passive Spirits.

Especially interesting is the way we unlock Spirits. By using the existing characters, their colorful clothes and various attacks, they always try to show the Spirits you are fighting. For example, to unlock the Genghar of spirits, we have to fight with the purple Donkey Kong on a toxic map.
Spirits, as well as the features of the protagonist, can be enhanced, making the World of Light gain lightweight displays of RPG adventures. Walking through the map is possible to defeat, unlock and use other characters except Kirby. All in all, this is a huge mode in which you can lose hours and how much time is needed for the transition. 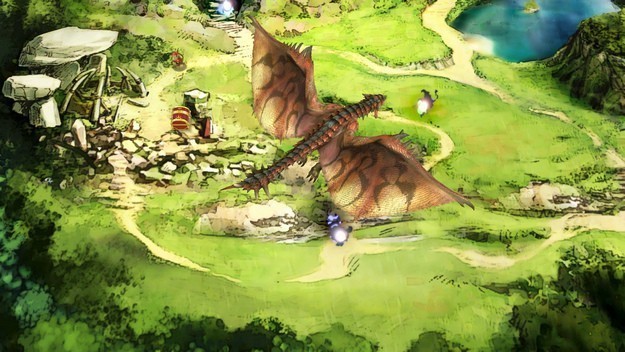 Currently the poorest offer is on the net. There are only two online modes: Quickplay and Arena fighting. With Quickplay, we can go into a random online battle, with the ability to set certain rules that we want to fight. In the release of the game it was rather frustrating because the game did not care much for your choice.

"The poorest supply is currently in the online game grid - the one you need to pay for Nintendo."

In the meantime, a patch that partially solved these problems was dropped, but it did not completely remove them. This is especially frustrating since the popular mode from the previous parts For Glory is not available. He offered one-on-one combat without an object and thus helped the competitive players to improve their tournament skills. Now they are the same convicted at the Arena of the battle or hope that Quickplay will throw them into the desired match. 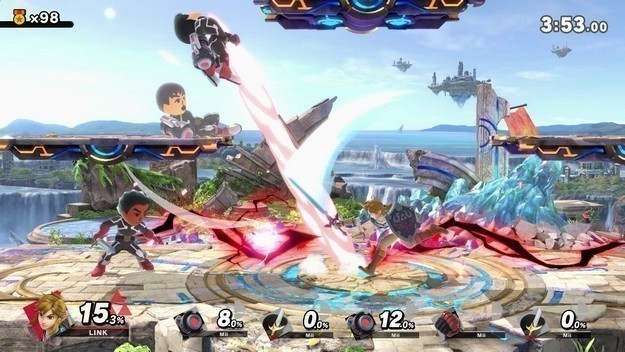 As for Arena fashion, the concept is quite simple and fun. Up to four players are inside the ring, while others are waiting for the end of the fight. After that, weaker-placed fighters are turning out and changing them next in line. You can create an arena that can be accessed by all, people with code or just friends, and it is an excellent playground for the team.

The same network struggles may have problems with the connection visible through the slowdown of the action, especially with the increase in the number of characters on the map. Although it is understandable that this may be due to a worse connection between certain fighters, Nintendo could at least offer a typical system showing the strength of the opponent's relationship.

Network struggles may have problems with the connection visible through the slowdown of the action, especially with the increase in the number of characters on the map. 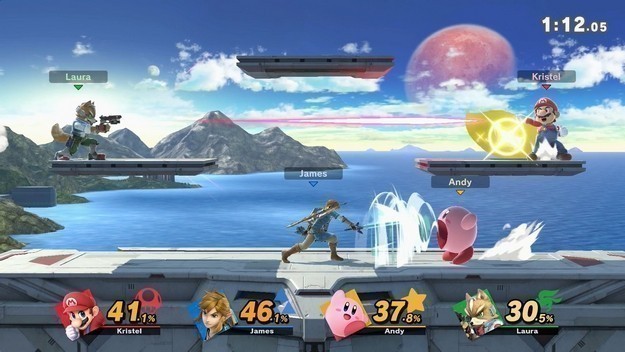 When we are already in the fighters, let's say that this version does not make a random Ultimate name. All the characters that have ever appeared through Smash history are again available. From a standard team like Maria, Linko and Samus to returnees like Cloude from Final Fantasy or Snake from Metal Gear Solide. However, it was not just the 63 previous characters, but we also got 11 new ones, like Inklings from Splatoon, Ridley from Metroid or Simone Belmont from Castlevania.

All the characters are fascinating and frustrating in their own way, just as it is expected for a martial game. Some are faster, others prefer slower, but stronger shocks. Some fighters can fly and, by the way, they can be saved more easily from the abyss. All in all, an interesting whole, everyone will find at least a couple of characters for themselves.

There is no missing content in other fields. Over 800 songs from a number of series are here, so everyone will be able to compile the list as desired. The folders did not save as there were 103 available. Most of them also have alternative battlefield and omega versions, so you can literally happen to play a certain version of the map for the first time after 20 hours. 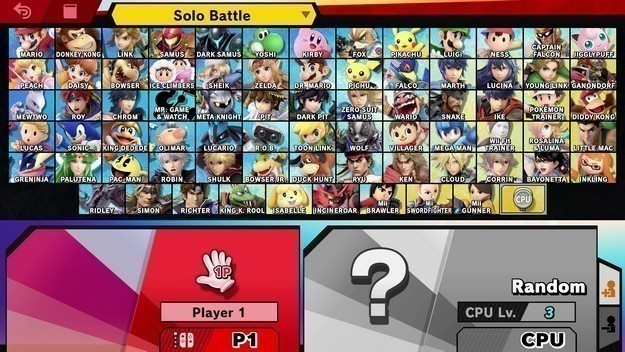 Super Smash Bros. Ultimate is certainly the ultimate package. It offers an incredible amount of modes, tracks, characters, songs ... It's not just a matter of quantity, it's all meaningfully incorporated and works great. Even the new mods have brought a lot of freshness, especially the content of the World of Light.

The new Smash is not without disadvantage, especially those related to online battles and a competitive scene. However, along with the first improvements already shown through the upgrade, I believe that this part will be flushed to the end. Again, this is the ultimate package. For any audience. 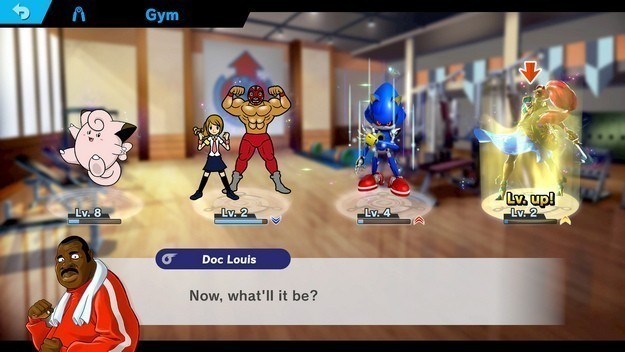 this game is the reason why i want to buy the switch lol. great article dude!

Love this game, I used to play it when I was at school. It is very fun

How are u bro

A yes from me, seems pretty good.

I will play it on emulator in the future