Introduction :
Stardew Valley, a farm simulator style RPG in a tiny, cozy town, has clearly shown what gamers want. Nearly twenty thousand reviews in Steam, more than a million sold copies! Gamers, as it turned out, are far from always willing to jump Rise Of the Tomb Raider (which is obviously a very good game), kill zombies In Resident Evil or tremble from horror at Freddy's five nights. Sometimes they just want to rest their souls, admire the simplicity of gaming and, stroke cows and feed their pigs. In other words, to be a simple fantasy landowner.
The game is noteworthy because the developer (Eric Barone, nickname - ConcernedApe) has been working and updating it by himself for over 4 years now, initially inspired by the famous Harvest Moon series. Many call Stardew Valley the Harvest Moon clone, and they are somewhat right, the resemblance is sometimes striking; but Harvest Moon (as well as one more similar game - Animal Crossing, (write in the comments if you want me to review that game too)) never came out on the computer, as it was a Super Nintendo release, while Stardew Valley is accessible on both PC and console, which is one of the reasons why it is so much more popular. And deservedly: it is beautiful (if you love pixels), fascinating, balanced.
I found myself sitting on the computer all day, walking in the game's woods, collecting items, completing quests and checking that my crops are growing... and then suddenly, it's already 5 AM, and the first lesson I have is a math test. I've no regrets though, because my animals are not hungry :)

Your character (boy or girl, whichever you prefer) gets an old farm that he/she inherited from his grandfather; and once, having decided that you don't  like office slavery, you set off on a long journey to the ends of the earth, Pelican Town, where your house, the future star of the country's agriculture, is located. 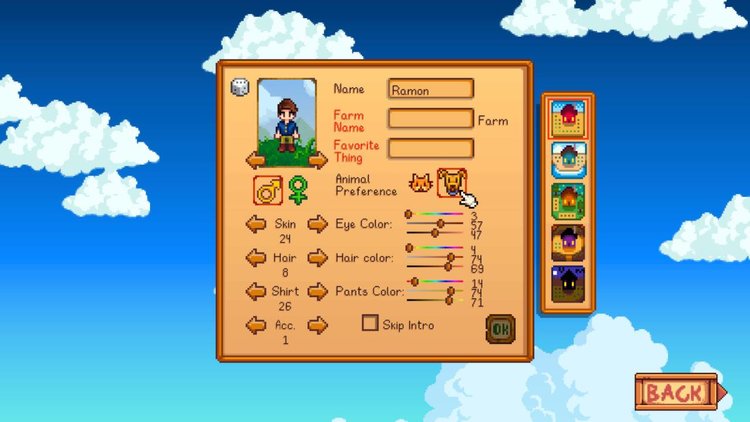 Here is the character creation menu.

Stardew valley is like a diary - it seems simple at first, but the more you get into it, but as you move forwards you reveal the real beauty and complexity of the game. There is a lot to it's story and the different layers of it and the progression of quests - they get more interesting and require more as you play more. If you are a RPG lover you will fall in love with this game instantly - especially the multiplayer, as interacting with others just adds more to this (soul)gem of a game. I could describe the story for you, but there are many reviews on the internet that already do this for you, so I feel like that is just unnecessary, especially if you wanna give the game a spin yourself. Heck, If you don't like it, you can just refund it,which I doubt you would, before you've 2 hours of playtime!

Everything about this masterpiece - the artstyle, the music, the gameplay and all the different things to achieve and unlock this game make it very long and grindable, as there are over 40 achievements and so many quests to do and items to unlock, that the replay value and gameplay time could almost be described as infinite. And even after you do complete and finish everything, the multiplayer co-op addition doubles the fun and rapidly increases your progress, as you both help each other to become a better landlord. The game is also constantly getting updates.

Stardew Valley is a beautiful and mechanically fun countryside adventure. There are always new friendships to be made, and me, after playing the game for nearly 160 hours, I still feel quite new and like there are still many secrets and mysteries to be uncovered. There are thousands of mods that can and will add tons of new and customized content, and you can change the game to your liking. New updates add more goals, items and events, which make the game all the more fun for new players and also extends it's own life for old players, too. The gameplay and the game are well thought - out and taken care of, and the co-op makes the game just that little bit better, even though this RPG is an outstanding game as a standalone single-player game. A true example that a game doesn't need amazing graphics, the "AAA" classification or a well-known developer to be popular.
My rating: 9.3/10.
Sorry for any mistakes and grammar errors, I'm not from an english-speaking country. Any criticism is appreciated and welcomed, as long as it's not offensive. Thank you for reading this wall of text that is my review of Stardew Valley. If you'd like any other games to be reviewed - just ask, I might have played them. Thank you and have a good day! :) This is a re-upload of the rejected version because of the misspelled title! :)

This is a re-upload of the rejected version because of the misspelled title! :)

Game thats worth to buy and nice article.

This is wonderful and excellent

It looks like terraria in some other universe XD, good job

i also love how there are black and gay characters, its nice to know that this developer was thinking outside the box

I'll check this game out.