Spacewar! is a 1962. space combat and shoot 'em up game, designed for the DEC PDP-1 minicomputer developed by Steve Russell, a computer scientist and programmer from MIT. While it is not the first computer game ever designed, Spacewar! was one of the most seminal and groundbreaking games ever designed. 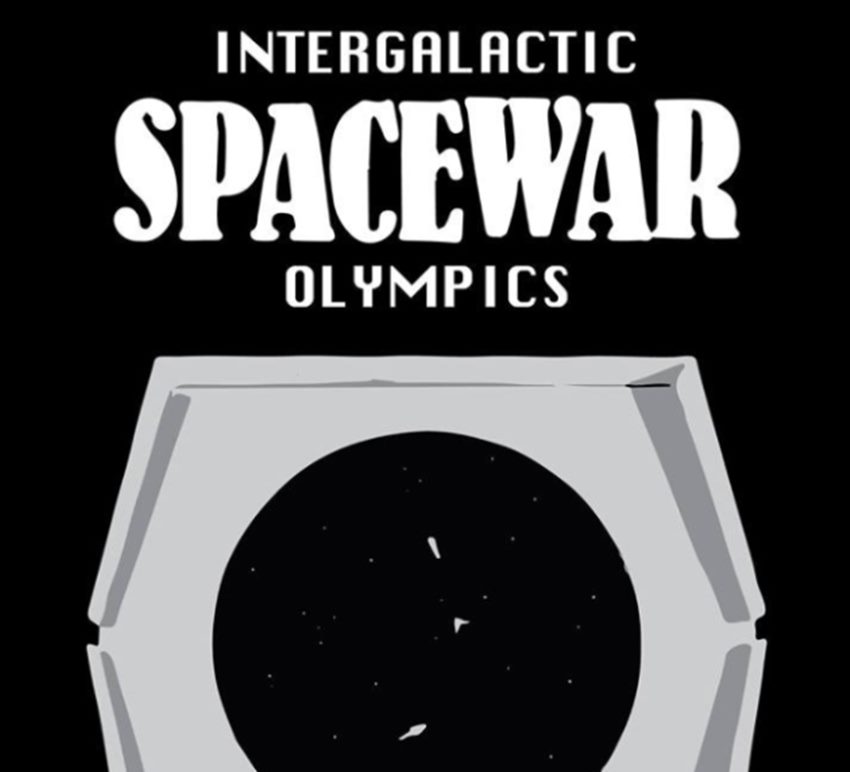 As you probably realized from the title, this isn't an ordinary article. This article is about the history of gaming, how it all started, even though it is not about the first computer game ever, but this game is a pure gem! After a lot of thinking what should I write next, I have decided to start from the beginning. I really hope you will enjoy these series of my articles about old games.

It is hard to impress a modern audience with those old games, but I had to show how important and influential Spacewar! is in the history of computer games. Prior to the development of Spacewar!, all of the computer games were programmed on one-of-a-kind computers, often custom-built ones for the very purpose of playing them. However, the DEC PDP-1, on which the Spacewar! was designed on, was one of the first affordable computers purchased by many of the computer science departments of large technical and scientific universities. This meant that Spacewar! could be opened up to a larger market than computer games that had existed previously, and by releasing the source code of the game, more and more people became acquainted with the experience of computer gaming. Later, becoming an technical demo and diagnostic program for the PDP-1, Spacewar! is the first computer game which became popular and apart from William Higinbotham's 1958. Tennis for Two, is the first computer game which have inspired developers for gameplay elements in later games. 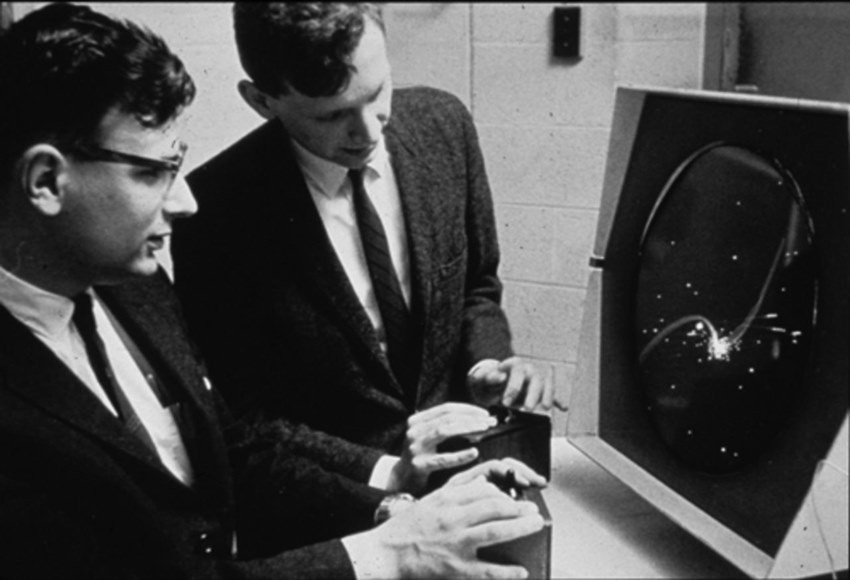 So, we understand why it's important, but is it any good? Amazingly, and somewhat shockingly it is! Almost sixty (yes 60!!) years old game which has gameplay elements that even some modern games can't compete with. It is simply timess and that well designed!

The gameplay is simple: it is one of those eternal "opposite" battles, like red versus blue, or left versus right. Taking control of one of two spaceships, the goal is to destroy your opponent using your missiles, while also avoiding the gravity of a centrally-placed star. As I've already said, gameplay is simplistic but surprisingly complex at the same time. Advanced players can use the star's gravity to slingshot around drastically affecting their speed and direction, and generally the star simulates gravity as it is in real life.

The central gravity will wipe up many first-time players, and the slow movement of the spaceships may frustrate those players used to the smooth gameplay of modern computer games. As well as that the spaceships are affected by momentum, which while offering new strategies for the advanced player, would confuse those unfamiliar with the concept from either experience at the game or from knowledge of physics. On the other hand, because of the very difficult central gravity, the ultimate mastery of the controls in this game is more satisfying than in many later multiplayer games. 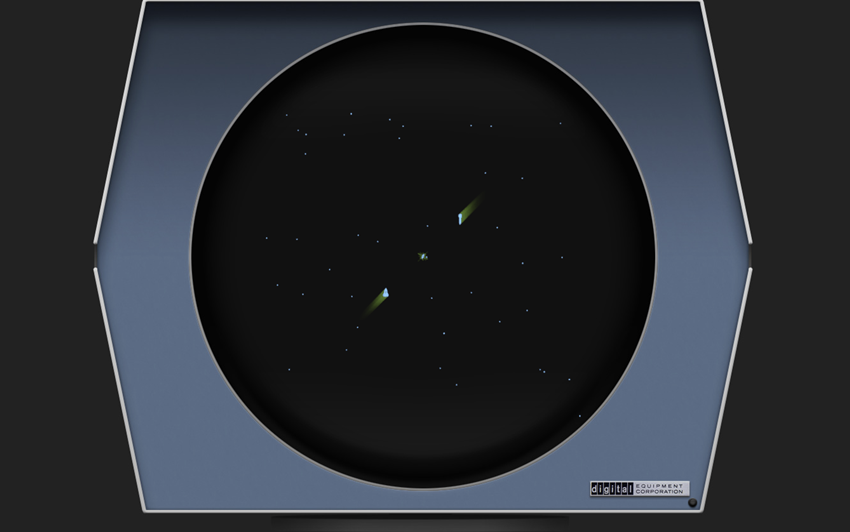 Using the sense switches on the PDP-1 unit, you were able to change the parameters in the game like eliminating the star, enabling angular momentum or by making the star teleport rather than kill the player. Gameplay could be altered drastically, requiring more strategies to be devised, and allowing for much more variety. Controls in Spacewar! are not necessarily intuitive to the modern computer gamer, but they are perfectly mapped and do their job admirably. There are five controls, mapping to left and right rotation, thrust, fire and the hyperspace function which teleports the player to an unknown destination, even sometimes right into the centre of the star if they were unfortunate, the possibility increased with every use.

This sixty year old game can embarrass many modern titles. It was not a professionally-directed effort with dozens of artists and programmers; this was an amateur attempt, designed by university students in their spare time on a computer that they could only time-share. They had no precedent to be inspired by. It wasn't the first computer game by any means, but the games which they had seen were simple tic-tac-toe and card games, and had little to no relevance with their own work. 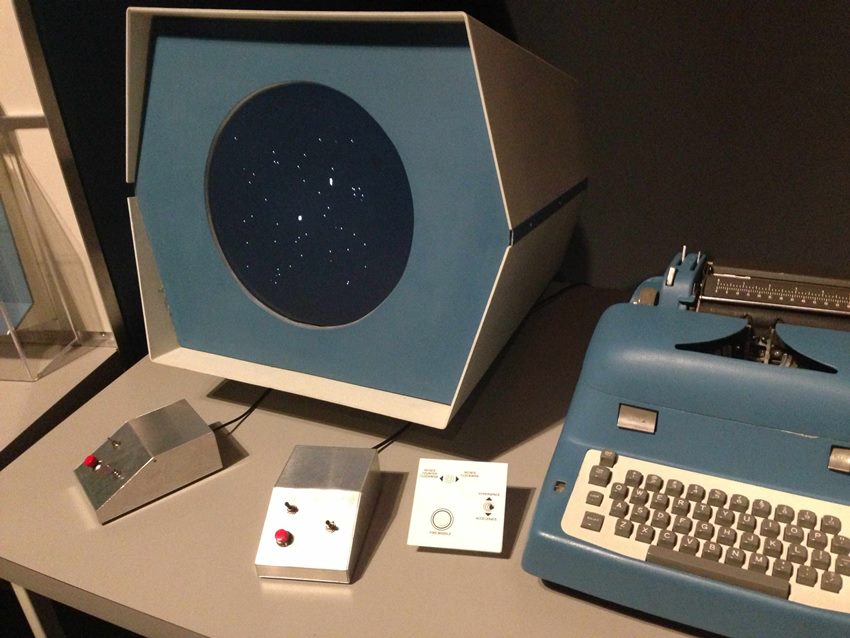 The gameplay couldn't be considered perfect, however, the central star creates so much gravity at standard settings to make it necessary to escape the gravity well before any chance at fighting, which slows down combat significantly, and makes the star more of an antagonist than your opponents, compounded by the fact that the spaceships don't have a particularly high rate of thrust. It's possible to reduce the gravity or remove the star altogether, but the spaceships still suffer from a lack of thrust, which makes it difficult to change directions very quickly.

The spaceships don't have particularly strong offensive power either - the missiles that they fire are slow as well, and they require a lot of target-leading, which is difficult and not particularly intuitive. The hitboxes on the spaceships are ridiculously small, also only covering the middle of the spaceship rather than the entire length of them, meaning that the difficulty in hitting a target is increased, leading to frustrating situations where your missiles will pass right through the sprite of the enemy spaceship. 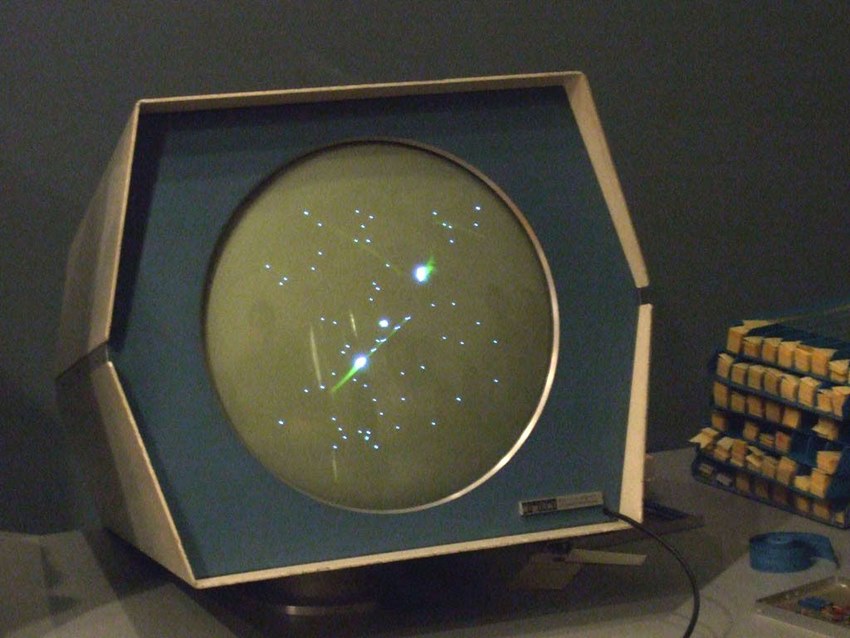 And, of course, there's the graphics. To the credit of the developers of the game, the simplistic graphics are highly advanced for the time, and it squeeze every bit of power out of the PDP-1. However, due to the early CRT display that they were rendered on, the graphics tend to display a bit of ghosting when the sprites move, which creates quite an eerie and pretty effect, but it can be a bit distracting when you're trying to lock on a target.

However, computer games wouldn't get much more advanced graphically for many years, and to achieve the performance which the developers did with such hardware must have taken some significant skill.

Spacewar! Is definitely a triumph. A game which feels fresh almost sixty years after it was developed, and it was just one of those technical experiments which turned out fantastically, not only Spacewar! can claim to be one of the most important games ever developed, but also one of the fairest and most balanced multiplayer games ever created.

For those who would like to try the game, here is the link to the original game run on emulator. Enjoy!
https://www.masswerk.at/spacewar/

Love those articles, too bad you got ban for 20 years without any proper reason!! :(((

haven't heard it before, but this game is so old XD
would try it after to see how is it
thx for the article

Nice idea for an article