The creation of Japanese game developer Tomohiro Nishikado is probably one of the best-known and most remembered arcade game of any description in the history of video gaming. It was released by the Taito Corporation of Japan in 1978. 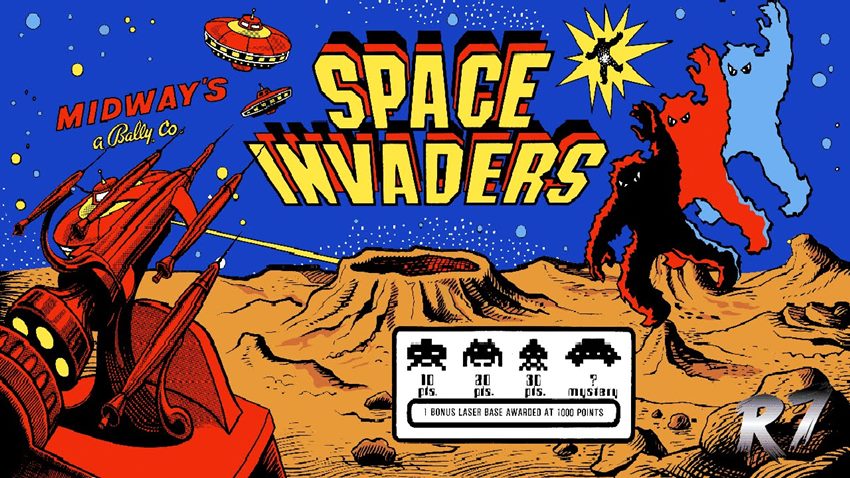 The arcade machines were originally manufactured by Taito in Japan, and were later manufactured under license in the United States by the Midway division of the Chicago-based Bally Manufacturing Corporation.

Nishikado took his inspiration for the game from a number of sources like Atari's Breakout game, Byron Haskin's 1953 film adaptation of H.G. Wells' War of the Worlds, and the film Star Wars which first appeared in cinemas in 1977. It took around a year to develop the game and its associated hardware. 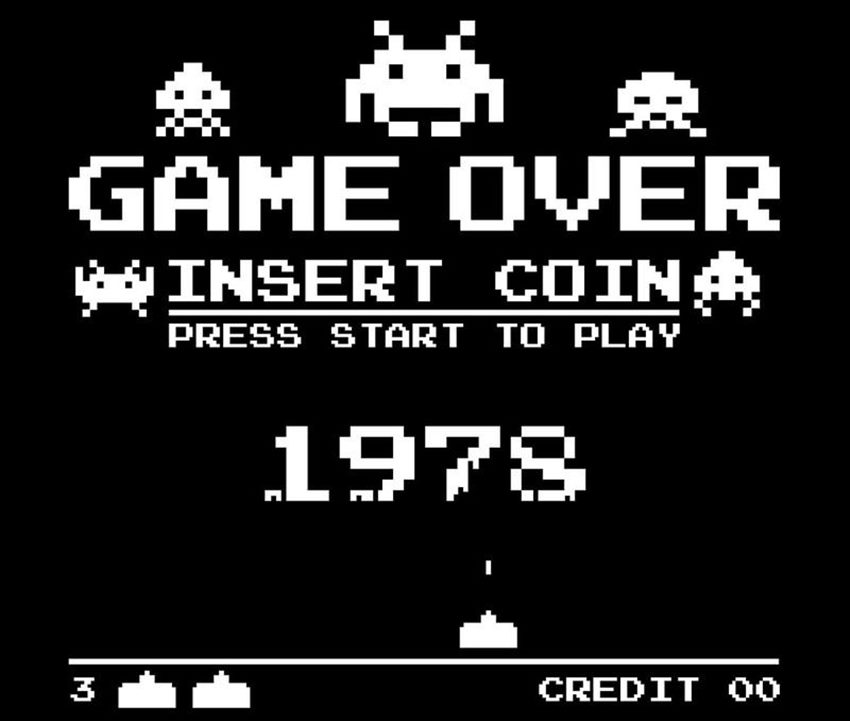 His intention was to produce a shooting game of some description in which the targets would be moving objects, but the parameters shifted somewhat during the development process. Originally, the targets were intended to be tanks, planes or ships, but Nishikado was not happy that he could create a convincing enough game scenario involving this kind of military hardware, given the technical limitations within which he had to work on. He briefly considered depicting soldiers as the targets, but apparently found the idea distasteful. Shooting aliens appeared to have been both the most practical and the most palatable solution.

The end result was a deceptively simple video game that captured the imaginations of millions of people. The game became so popular in Japan that it created a shortage of the hundred-yen coins required to play the game, and supplies had subsequently to be increased. The game allegedly spawned a mini crime wave, with youths carrying out grocery store robberies in order to acquire money to play the game.

Space Invaders achieved similar success in the United States and Europe. The medical profession in the US reportedly identified ailments such as "Space Invaders Elbow" and "Space Invaders Wrist", while in the UK attempts were made to bring a bill before Parliament to ban the game due to its addictive nature and allegations that it caused "deviancy". 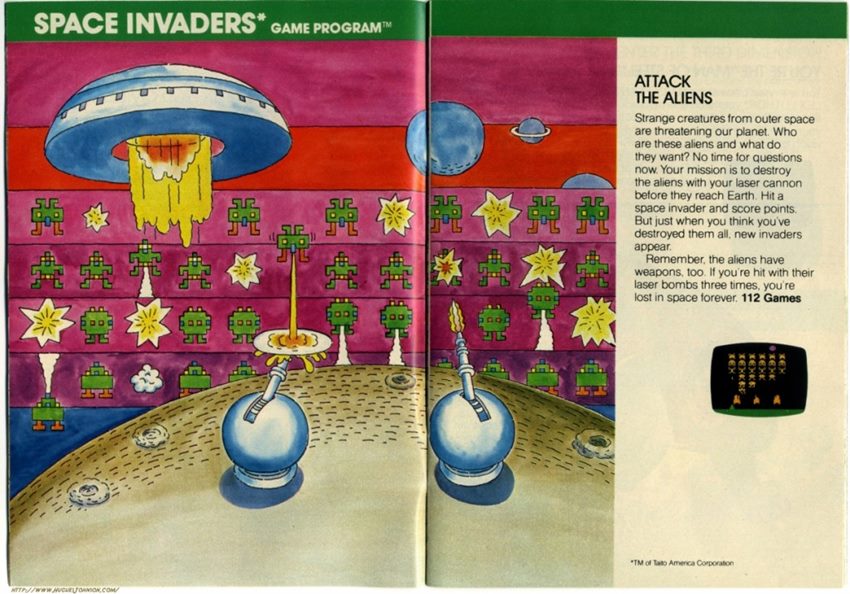 As for the game itself, the aim is simple - destroy as many alien spacecraft as possible in order to achieve a highest score and stop the aliens invading Earth. The player is confronted with row upon row of alien spacecraft that traverse first one way and then the other across the screen. Each time the alien fleet reaches one side of the screen or the other, the entire fleet moves one step closer to the bottom of the screen.

The player controls a laser cannon that can be moved left and right along the bottom of the screen. The laser cannon is used to destroy alien ships, but also can be destroyed by projectiles fired by the aliens. Nishikado had introduced a novel element to the video game - an enemy that could return fire, and that could exercise a measure of intelligence in targeting the player's weapon.

Nishikado also demonstrated a degree of ingenuity in exploiting one of the limitations of the hardware. He found that the speed with which the alien spacecraft moved backwards and forwards across the screen was determined by the number of aliens present. The fewer aliens there were on screen, the faster they moved. Instead of trying to compensate for the inability of the processor to keep up with the demands placed upon it, he made it a feature of the game. It thus becomes more difficult to target and destroy the alien spacecraft as their number lowers. 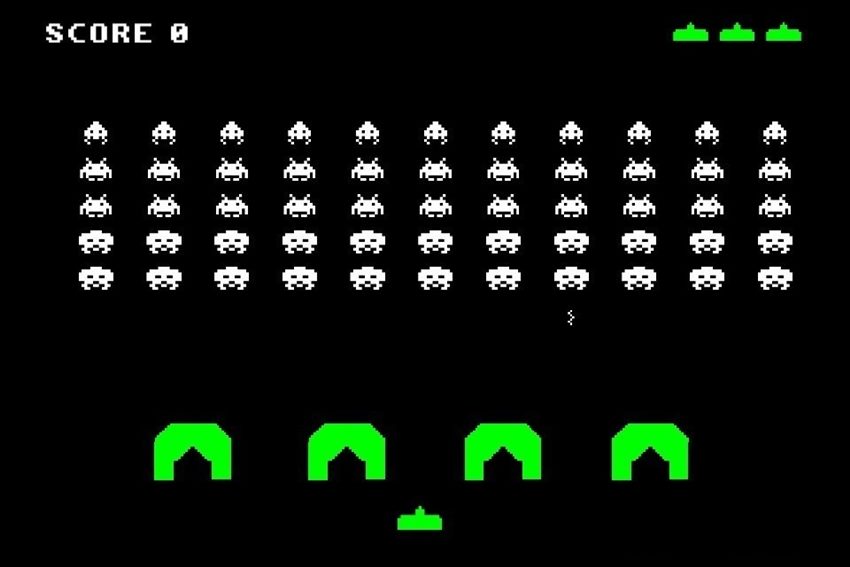 The speed of the game is also matched by the tempo of the electronic soundtrack that accompanies it so that, as the spacecraft move faster, the tempo increases. The overall effect is to instil a sense of urgency in the player which grows stronger as the game progresses (I can remember playing this game on a console in the late nineties and experiencing a level of anxiety verging on panic!).

Players have a three lives at the start of the game, although they are awarded additional lives if they score enough points. Each alien spaceship destroyed increases the player's score. At arbitrary time intervals, a different kind of alien ship flies across the top of the screen at a much greater speed than the rest of the "fleet". Destroying one of these ships earns the player far more points than destroying a "normal" alien craft, although they are of course much more difficult to hit. It is also necessary to ensure that no alien craft actually reach the bottom of the screen, because if they do it's game over.

The laser cannon can be protected to some extent using the shields positioned at the bottom of the screen. The player can move the cannon under a shield in order to prevent it from being destroyed. The shields themselves can be broken down by enemy fire, however, so you can't hide forever. A shield is also damaged if the player fires whilst the laser cannon is directly underneath it. 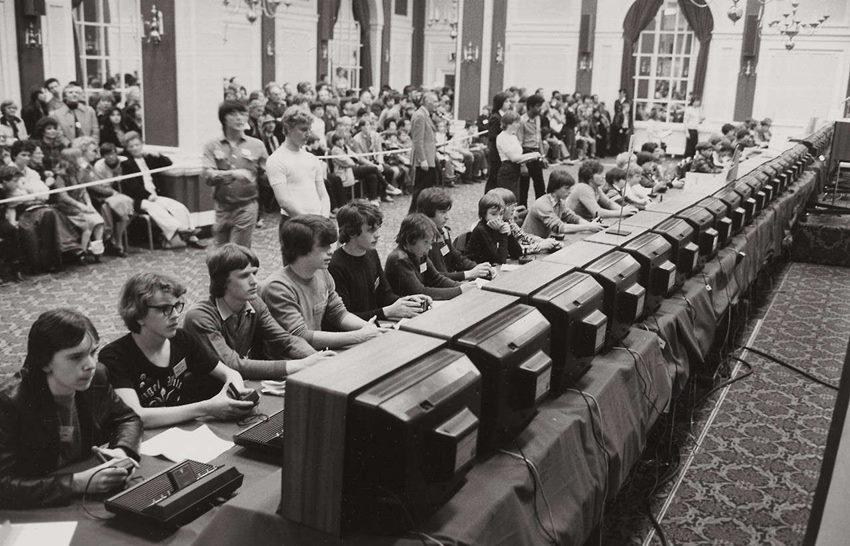 Although the arcade version of the game could be played by two players, only one player could play at a time. The interactive nature of the game was thus primarily characterised as a contest between a human being and the machine. Competition with other players did of course exist, for the simple reason that the game not only allowed to player to see their accumulated score at all times, but also allowed the highest score to be recorded on the game machine.

Within two years, Taito had produced more than three hundred thousand arcade machines in Japan, with a further sixty thousand or so being produced in the United States. During the first few years of the game's existence, it reportedly generated revenues worldwide of over six hundred million US dollars per year. This kind of financial return on investment for a video game was unprecedented, and showed that, as an entertainment medium, video games could compete with the film industry in terms of profitability. 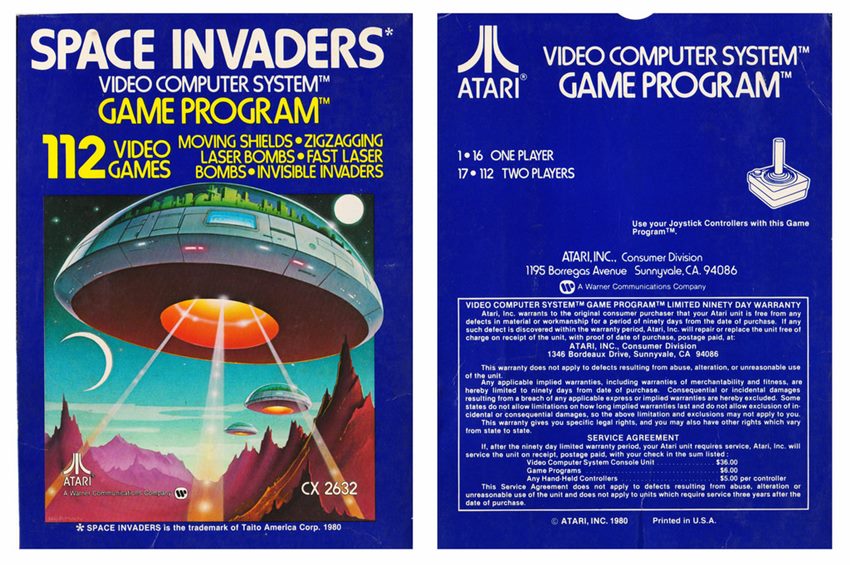 Space Invaders has inevitably spawned a number of sequels, remakes and imitators, and has undoubtedly been a major influence on generations of games that followed it. Updated versions can be found on many of today's game consoles, and numerous simulations of the original game can be found online.

trow back what is this game??

Well presented
Nothing much to complain about keep going and improving

a lot of effort thank you and nice one