One of the historically buried gems once again surfaced. It was a great surprise when I saw this classic game on the Android app store and got it right away, and I was even more surprised when I tried the game because I used to get cheap copies of geek games for other devices But the things here are very different. Sonic CD This game, which has been forgotten by history and has not even enjoyed any stage of its own in the Sonic Genritions, the celebration returns and resurfaces in a way that is not the game. Satisfactory and finally.
This game was considered in its time as one of the best platform games at the time, and for several reasons we will explain to you in this review, the beginning of this game has been fully programmed on the modified version of the engine of the first part, and is the only game that provided the "spirit" For the first part of the series again, the jumping and skipping factor was the top priority for Sonic games, not jogging and breaking records. Yes, Sonic CD is the most similar part with the first part of the game design process and the technical style of the stages, but this It also means that the game will not be perfect The satisfaction of the players who are used to the games sonic jet. 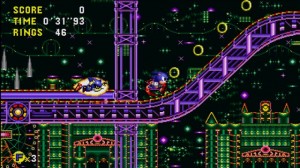 But the greatest strength of this game is the element of time travel! Yes, you did not miss reading the phrase this game actually and for the first and only time in the history of the series progress element progress through time, there are stages in the stages to move to the past or future, each stage in the game has 4 models: past - present - The bad future, and each model has a special melody and different drawings and even different distribution of enemies and different ways in the same stages! Which is a powerful point of the game for any other Sonic game, if you succeed in destroying robot robot Dr. Robotnik will be able to get a good future and eventually it will affect the end of the game and this is absolutely amazing and will make you play a lot and even the stages of The good future will be free of enemies and drawn in an attractive and nice way! Moving through time will require you to pass through certain regulations in the stage, and then reach the maximum speed of Sonic over a short period of time and if successful, the game will take you immediately over time in the stage. 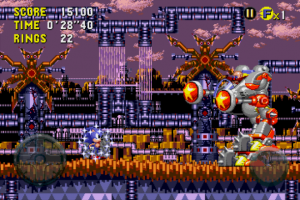 In addition to this classic Sonic game with all the old series games, the leader of each world and stages Bonus, this game has made some other additions to the series, including the introduction of Amy Rose for the first time, as well as Metal Sonic (who will return officially via Sonic 4The second episode) The physical physics of the game is identical to that in the second or third sonic and this is fantastic and much better than the physics provided in the latest sonic games Sonic Genesis or Sonic 4.

Does this mean that the game is flawless? Well, no, the game's backgrounds are very poor in detail. In fact, I felt that the artistic style in the game was not the quality of the other parts. The stages actually seemed to me like a bunch of cubes and different tools that were stacked together intelligently and carelessly but a little empty of life despite the colors The touch control on the Galaxy S2 annoyed me a little and did not give me the integrated precision I wanted in such a fast game (the game supports the Xperia Play controller for anyone who owns the device), but These minor flaws do not prevent Sonic from being a CD player One of the best and most innovative Sonic games on the series, the excellent physics and good platform play points enhance the positive impression the game has left on us, which we have missed in Sonic Games for a long time. To be followed by any developer who wants to re-release his old games again.

One of the best platform games in the era of the 16-bit gold at a very low price, we believe it will be a bargain for the majority.

I play sonic cd on my phone