I'm not entirely sure, how much I'm into retro games, but I believe there is a platform game that truly stands out among the rest: Shovel Knight. Developed by the indie group Yacht Club Games and funded by a massively successful Kickstarter campaign, Shovel Knight shows that relatively minor games have the potential to become something big when done right.

Shovel Knight is a knight clad in blue armor, who lives by the Code of Shovelry: Slash mercilessly and dig tirelessly. Together with his partner Shield Knight, he formed an adventuring duo that eventually became the most famed in the land. Alas, their career of adventuring ended in tragedy when the two explored the Tower of Fate, discovering a cursed amulet whose dark magic incapacitated the knights. Eventually, Shovel Knight awoke outside the tower, only to find the tower mystically sealed and that Shield Knight was nowhere to be found. The loss crushed hiss spirit, and he retired from adventuring entirely. 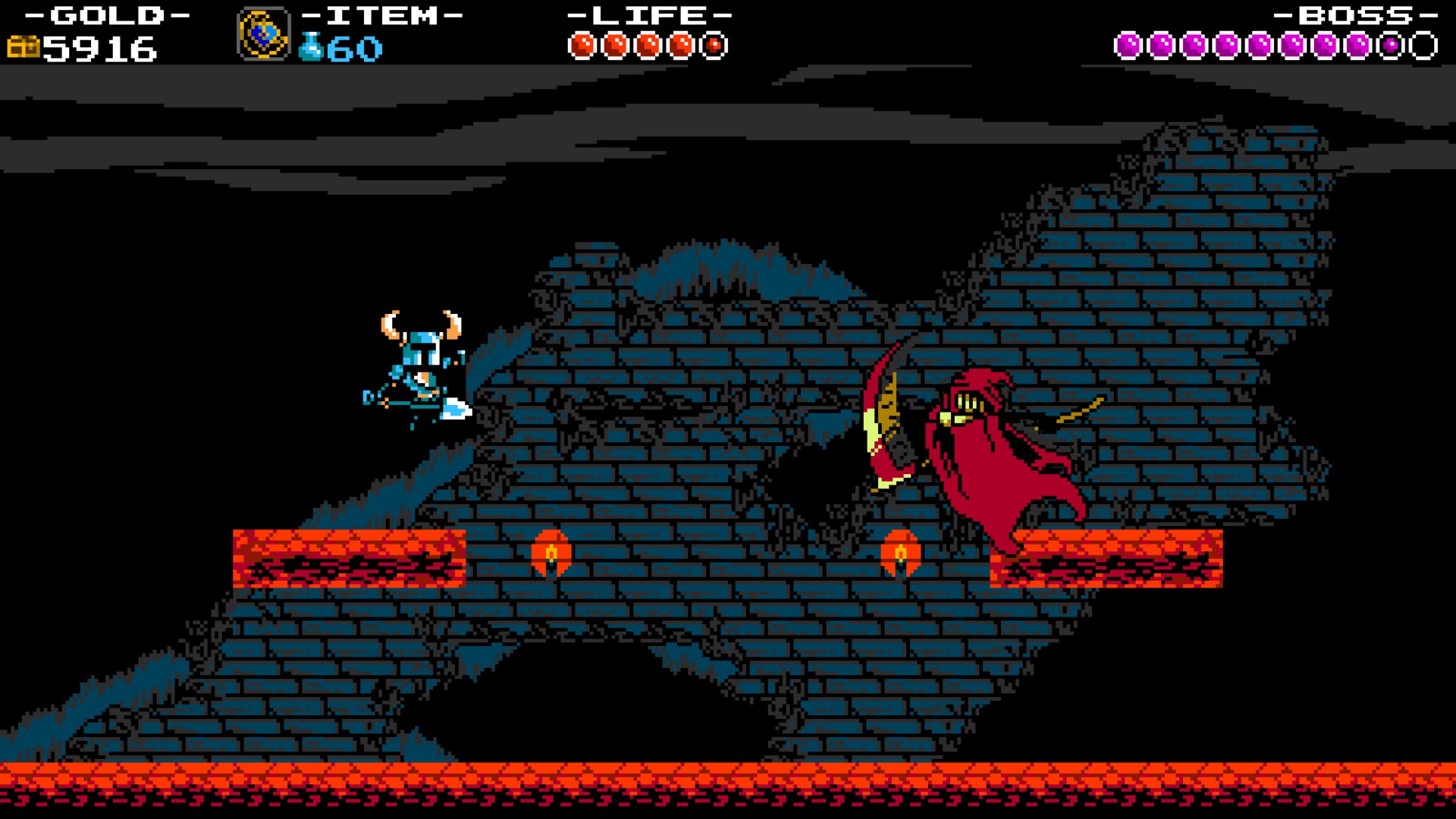 Unfortunately, the absence of the land's greatest heroes allowed evil to take over with ease. A woman with vast dark magical powers known only as 'the Enchantress' now rules everything, backed by a group of powerful and vicious knights called 'the Order of No Quarter'. Faced with a menace and learning that Tower of Fate has been unsealed, Shovel Knight sets out on an adventure once more to stop 'the Order of No Quarter' and hopefully find out what became of Shield Knight.

The game is a 8-bit 2D side-scrolling platformer. What makes the game stand out is that it successfully combines elements from several classic games of the 8-bit era. For instance, Shovel Knight can drop on enemies below him with his shovel blade pointed at them, highly similar to Scrooge McDuck's pogo jumping from the Ducktales game. First and foremost, Shovel Knight is seen effectively as Mega Man in a fantasy world, which is especially obvious considering several of the characters. The objective is to reach the end of the level, with every level ending with a boss fight. No two levels or boss fights are alike: Propeller Knight's airship features a load of fans, focusing on the element of air, Plague Knight's laboratory features fire and explosions and Specter Knight's graveyard includes a lot of spikes which can kill you instantly, to name a few. 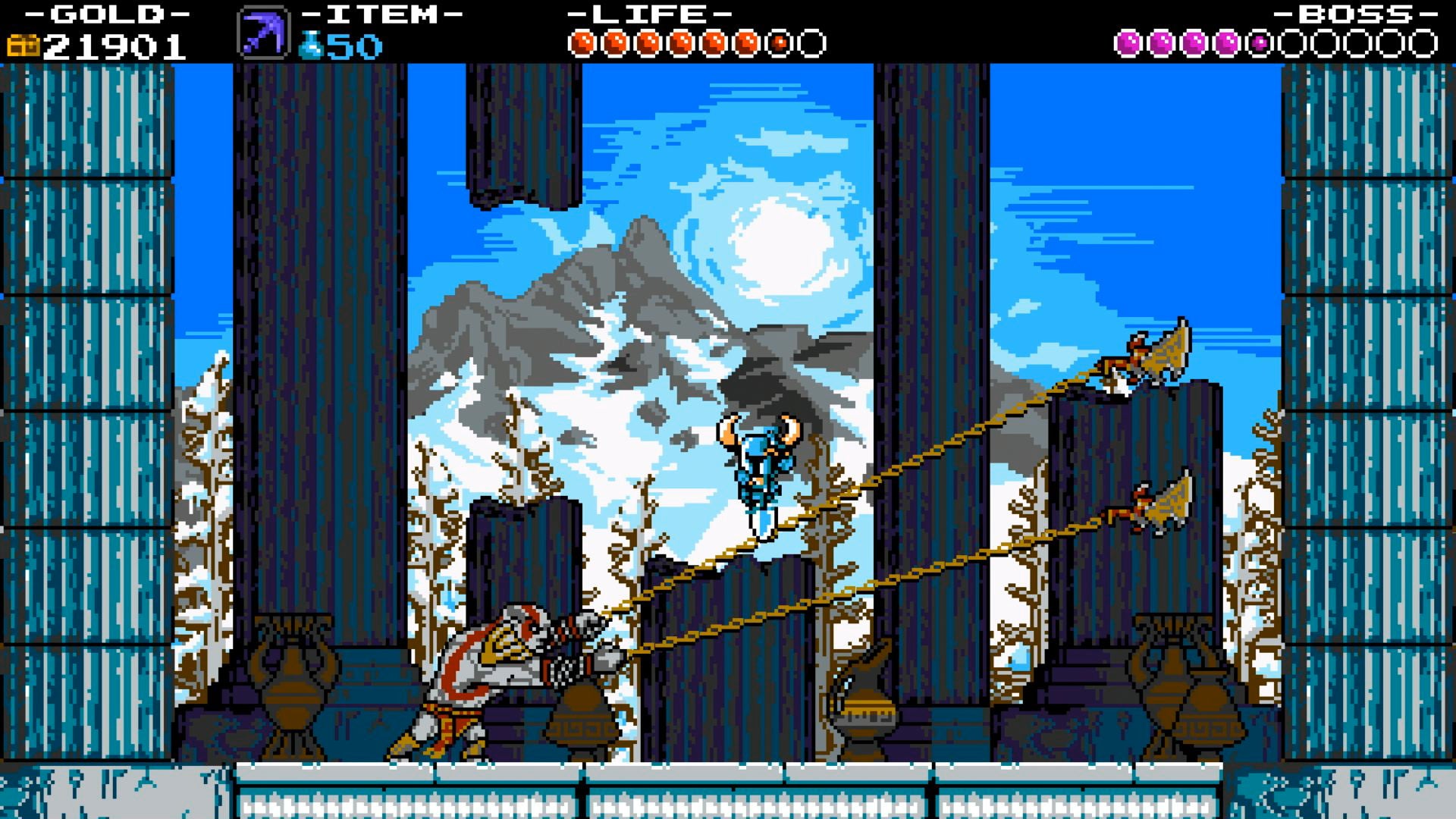 In addition to the shovel blade, Shovel Knight can also purchase various additional items called relics to give him a variety of additional attacks and abilities. Such as propeller dagger, which is especially useful when dealing with flying enemies, dust knuckles which allow you to clear a large number of dirt blocks in an eyeblink or to give you some additional punch in close combat, and phase locket, which makes you briefly invulnerable. Every relic costs mana to use. As a lot of things in the game cost money, it's also recommended to collect as much treasure as possible, whether from treasure chests, digging up piles of dirt scattered throughout the levels, or returning the lost music sheets to the village bard. Should you die, you will only lose some of your treasure, though it can be recollected. On most levels, the checkpoints can be destroyed for some extra cash, but doing so means you have to restart the level from the beginning should you fall. There are also a few bonus levels and bonus bosses, known as wandering travelers, though some of them are console-exclusive.

Think about what one could ask from an old school platform game. Good mechanics, a colorful cast of characters, where even the minor ones are memorable, good soundtrack with plenty of variation -Shovel Knight has it all. Shovel Knight's high status as an icon of the retro games in modern times speaks about the game's quality -he has made a large number of guest appearances in several other games. It has been said that Shovel Knight is an excellent experience whether you want to experience the nostalgia of the classic games or haven't even heard of such titles. I can confirm that this is true. 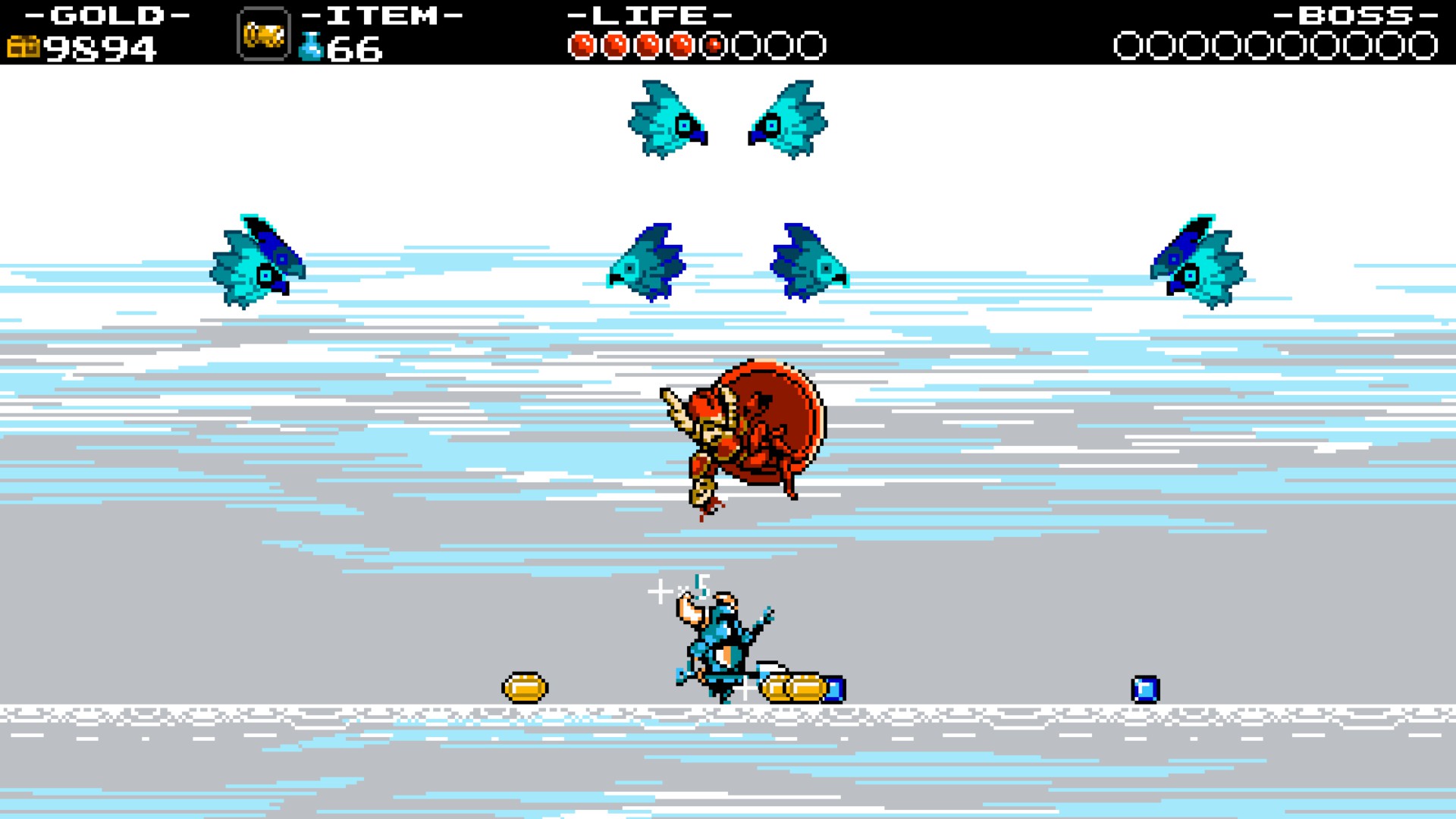 Great article, and teh game is amazing, one of teh best retro games ive ever seen, teh gameplay is fantastic and teh way of fighting gives the player a lot of possibilities since you can have ranged attacks, mele attacks and attacks from above, would TOTALY reccomend this game to everybody.

This game brings back some memories

İ Love This Game So Much

Shovel Knight has been collaborated with a lot of other game developers too. That's EPIC

It looks like a cool game ill check it out thanks for the article :)