If you are looking for a fun game with precision and graphics ..
The solution is Far Cry 2, this game is one of the most beautiful games in my opinion, because it does not require high specifications and when you play will know how beautiful and fun ^ _ ^
The story in Far Cry 2 is very exciting and exciting, where you are a mercenary working for corrupt people who send you to an unknown region of Africa ravaged by civil wars. Your task is to kill a very dangerous weapons dealer known as The Jackal. But once you arrive, The Jackal "is a very fraudulent person with strong sources that bring him news and knows all your moves. At this point you have to do the heart of the warring parties against him by telling each side that" The Jackal "supplies the other side with weapons and equipment to fight the other, Two army "UFLL" and the men of the "APR" revolution, and will spend almost half of the game in action with the end And you will have to pass all these tests, and the factor that will complicate things more and more is that the character of the hero sick disease "malaria", which will force you to control the player in a timely manner without speeding .
You should also occupy the "Jackal" army camps in order to reach him but he will soon escape from you

Graphic:
For the first look, you will find the system that is governed by most of the game leaders (FPS), in this game seems very ordinary although this is not true, every minute goes by the game finds that the image sector of the game is tight and beautiful, it is like the system used in the largest military games modern (Gears Of War and Call Of Duty), they are based on a weapon-only style of showing enemies in large areas. They can hide, attack, and defend themselves in a very real way. Here we see the realistic direction of weapons by removing the signal that shows where you pay for weapons, Others, put their place the time system The real system, where there is no explanation but eye to increase the difficulty of the game, and also depends on the system of running and switching weapons and climbing, riding and repair the car in real form instead of modern form, and it is interesting here focus on the factor of time and climate, for example if you played for an hour you will find the clock moved from the seventh The sun will go down, and sometimes there will be sandstorms and rains, which are very beautifully sculpted as real. The picture here and the general view removes all the impurities of the artificial intelligence system. It takes place here simple Well done, there are no errors from a third person perspective. Full control works well here. It seems that the almost no mistakes here will push the company to move in improving the field to become the strongest among all the games. 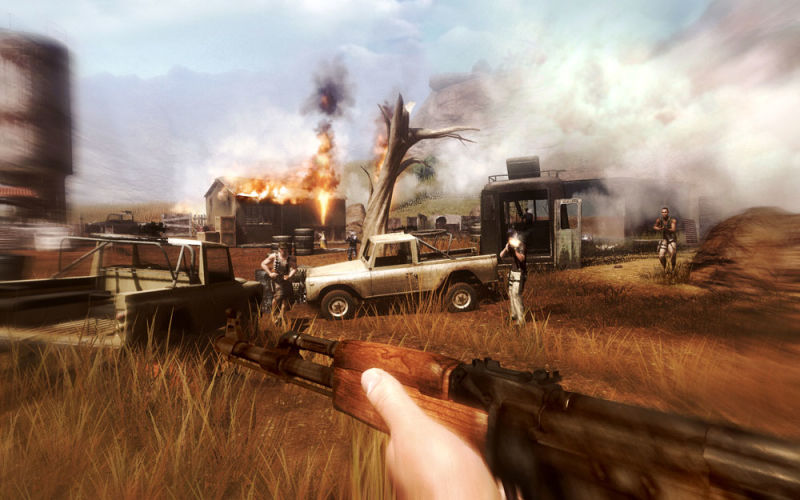 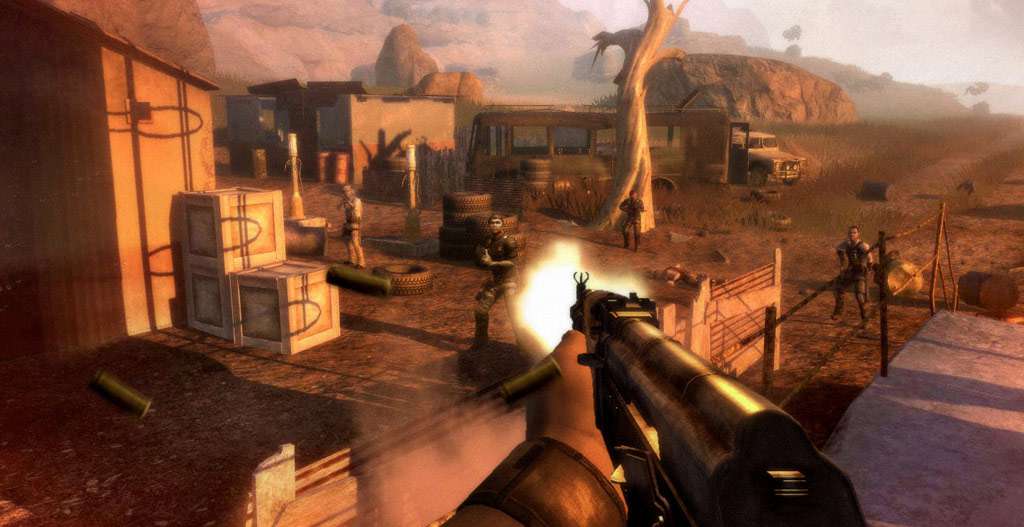 the story:
The game is based on its success on the real stories that take place in the African jungle, where foreigners rent mercenaries and provide them with weapons, in return for a simple living, to guard them and guard their forbidden acts, such as the trade of diamonds and drugs, where every capital seeks to eliminate rivals in various ways Possible to stay alone and control everything .. (8.5 \ 10).

Graphic:
The picture looks ordinary compared to other war games of this kind. Despite the difference in the two games, I have tied them to each other in terms of the idea of playing, but the unique movements of the character here are very good, and the system used by the systems that will be used by similar game manufacturers in the future For the realism of the system used here .. (8 \ 10).

Sounds:
The sounds of the characters are as clear as any modern game, bullets, fire, shells, animals, dialogues, grenades, cars, rifles, heavy and light machine guns, and so on, to a great extent realistic, while retaining the preferred system of all the modern games.

Artificial intelligence:
It seems intelligent and moving characters here the weakest thing in the game, although there are no major flaws, but the weakness of this sector is very clear, the repetition of scenes in the fighting and the same method of launch and hiding in all the characters seems repetitive and boring, stupid opponents make you close the game instead (7/10).

Conclusion and opinion:
The game is frankly supernatural to the laws of armed conflict games combined with adventures, an endless number of villages and places to go to, a good image of a generation of good games, characterized by multiple realities, such as firing and weak correction system used as a completely realistic, The game is good for the advancement of the excellent .. (8.5 \ 10).