You have to be patient and fight to earn your living. Your country has forgiven you and ignored your destiny. I have repeatedly searched for Musharraf's work, but unfortunately for the life of those who call. Therefore, you have no solution other than migrating to another country. Separation, leaving your loved ones, your family and your friends, leaving them behind you to go to a country where I saw hope for a decent life, and the pain in this is leaving you in your country in a scattered state, where revolutions and demonstrations are taking place around the system that will lead it.
This part of the land is located in a fictional land called Kyrat, which is considered to be the country of origin of which you gave up a desire for a prosperous future, where your return was undesirable and only due to the harsh circumstances that manifest in the death of your mother. Her dunk. Through this visit, you will be awakened by the state of the country, blood everywhere, injustice and aggression. This is all about the corrupt regime led by the unjust Pagan Min who has established himself as the king to destroy the country and kill its people, the latter who have under his control soldiers who do not know the meaning of mercy. And you will find yourself in a civil war against the tyrannical regime, and hardly have a hand in his hand but to confront him and resist him with all the strength and means, he may fall and come in a king eager to restore the country for its peace And reassurance. 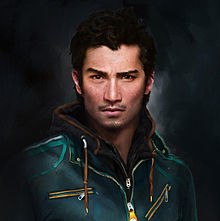 If we want to talk about the style of play, because of this amount of information we can talk about in short, as we return the chain in the previous parts based on the perspective of the first person in an open world, and this time the fourth part more fun, as the correction has become very precise and precise, where As you can see, you can find anything that is easy for you, such as your long-distance predator, which has given a special shine to the part. Sometimes you may need skins to use in your affairs, like sleeping and dressing. Beautiful provided after teaser The forest is dense and each has a single animal and a different mystery, regardless of the story that played an important role in building the game, as the hero preferred resistance for the honor of his country and his people to return To the neighboring neighborhood where he found a decent future.

In the fourth part of the series, the artificial intelligence, which is the most powerful in the fourth part of the series, can be seen in terms of enemies. Their intelligence level is good. They are able to observe you at long distances if you are not alert. The map shows a small white arc in the initial period of observation. This means that they are exposed to you by 50%. You can remove this detection by hiding in a place that you think is suitable for a few seconds, but if you have a big red bow, it means that they reveal you 100% and from this forum You will have no solution but to face them and the effort to overcome them, Amo You can use explosive weapons in camps and gatherings where there are a significant number of enemies and thus get them professionally. This was for the intelligence of human enemies, not to mention predatory animals that were characterized by a little exaggerated intelligence. Immediately after hearing the bullets coming from you, You find yourself victimized if you do not have ammunition, because killing it is harder than killing a human enemy in some cases.

Ubisoft also relied on strong engines in the design of its games, and for this part was good in terms of graphics in general, although it has negative points represented in the embodiment of the characters of the game, which will not diminish the value of the game very little, The most important part of the series, considering the previous parts, the part we are talking about is characterized by graphics recommended, as developers relied on the visual effects that try to make you live realistically adventure, such as grass and the way it tilts with the wind, and the enemies that vary from one group to another, About the camp The high-rise buildings that appear. Overall, there is little difference in the graphics of the game. It is about the old console (PS3 XBO360) and the new (Xbox One - PS4), regardless of the PC that has no competitor in case it has excellent specifications. 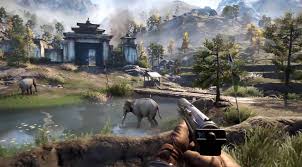 The sounds of nature are very good. During a circus in the forest you will still hear birds singing and the sounds of other great animals, such as wolves, elephants and dogs, as well as the sounds of the wind. And the trees at their tilt where you increased the sound to a large extent you may feel yourself inside the game as if you are in a real task, not to mention the sounds of weapons that characterized each other and gave a distinctive character of the game, while the voices of enemies are very perfect, Of the camps In the end, you will hear their screams and warnings to each other as if you were a strong army, and in fact you are single, and the sounds of the characters come out with the movements of the mouth exactly, and finally what impressed me is the soundtrack, since when you are at risk will begin teaser lightning, Idle and make you ready for any upcoming attack, on the other hand quiet music for being in a state of tranquility away from the dangers.

We are now going to the age of the game, the latter depends on the skills of the player and the extent of his experience in accomplishing the tasks, as well as the time he has to play, generally the game has a fairly long scenario, and as is known that FPS games are often characterized by the length of the game, given the huge number of enemies And the abundance of monsters that fill the map, and overcome them to the proportion of intelligence, if they were in the presence of the absence of their existence, such as their absence and I told them will not be difficult, but in case they were awake and waiting for the opportunity to attack you here will be difficult to overcome them, and for my humble view I see that ending such a game F A short period of time is difficult.

Conclusion:
Honestly, the game has a high position, relying on a violent method of fighting, which has never been touched by other games, which increases its value as the player will be eager to accomplish the goals afraid of the bullet a treacherous enemy, and from this platform I would like to advise all fans of FPS games experiment This part I see is distinguished from the last part that brought us back to prehistory.

You can beat the game in 15min if you just wait as you're told.