Bringing back old games through remakes,remasters and reboot in gaming world is nothing new. Whether it's software or hardware, people always like to remember the good old times that were left in memory for this or that reason. A lot of games went through this path and while some were less or more successful, Project Warlock is part of this second set. Those who have played games on the PC platform somewhere since 1993 in the last century will quickly recognize from which gamesWarlock is inspired.

Already with the first steps within the introductory level, we observe the old way of movement, without using the scope, and when the first serious weapon is picked up (knife and axe are not so good, though useful), returning to the past is completed. Fun and fast gameplay, a variety of weapons palettes, collecting keys and cards using teleporter, levels that are not too big or too small, a bunch of demons waiting to be sent back to hell ... all in one place properly assembled without inventing unnecessary things.
However, Project Warlock also has a "modernism" in the form of unlocking and raising the statistics of our hero with XP points that are filled not only by killing demons, but by collecting treasures and revealing the secrets of the letters. It is this discovery of hidden rooms and passageways that provides "old school" when it is necessary to recognize which walls can be opened or broken in order to pick up additional ammunition, health or something else. Better said, the overall "cubic" design of the level is done very well because at one point it will not feel the game suddenly become tense. 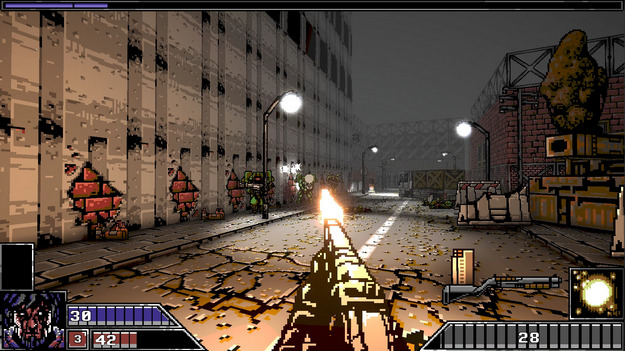 Sometimes it can be lost a bit when all three keys are assembled and all passes are opened, but this is mostly true if you do not even remember how it moves per level. In that case, the map is more than useful, so it is important to put an eye on it here and there, as it can also be assumed through it that behind the wall there is a secret space. Those who are accustomed to a bunch of information that games today provide may be a bit disappointed because the number of secrets per level can only be seen at the end. On the one hand, if someone wants to find out, everything could turn unnecessarily into the circle, and on the other hand, revealing the secret is, though useful, essentially entirely optional.

There are 60 levels and they are divided into four themed worlds and the fifth one  that combines all together. Each of them can be passed from three to seven or eight minutes. This, of course, depends on how much time it takes to reveal the secrets and if you dont know where is west or souht. Thus, the ending time of the game enters into some initial two-digit number, but that is not a negative thing,It has already been said, no part of the game is tedious. The length of the game is great because there is not  boundless content that would only serve to make the number of hours to complete the game as big as possible.

As for the shooting games, the sense of destroying an opponent is an important segment that is, fortunately, done more than well. It may not be bad for the weapons to leave a stronger sense of use in use. Anyway, the firearms palette is exactly what is expected. The pistol, the shotgun, the machine gun, the missile, the lasers ... it has everything. What's even more interesting is that every weapon that is picked up with the help of upgrade points can be changed. Thus a gun can become a revolver or a laser rifle can become a railgun. This is another ability that brings new ways to play which is quite interesting because of the available features. 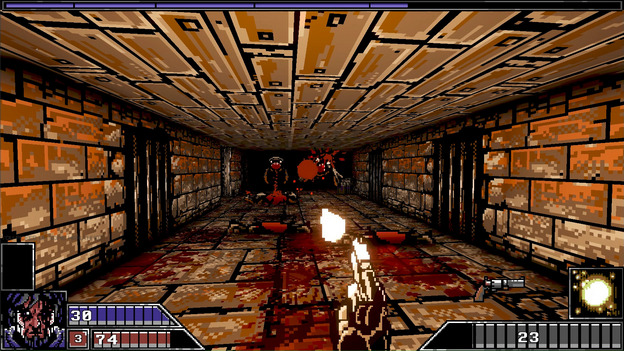 In addition to firearms, Warlock Project also has the magic that is not the most stupendous choice because the same points are used for unlocking them and upgrades and rifles. In fact, the biggest problem with a "magical" approach is that firearms can not do anything without it, so the choice of magic is more subtle, rather than as an option that works completely independently. The reason is that they are considerably less than the available drain tools, and some of them fall into support classes, such as enlightenment magic. It's a shame that this part is not a little better elaborated because it would be better to have separated points for weapons and magic upgrades and with that, magic would have more purpose. This way, besides worrying about the amount of bullets, it must take care of the hands, because casting magic does not come for free.Project Warlock is based on shooting enemies so it is logical that you will upgrade your weapon, not magic which is not "free", 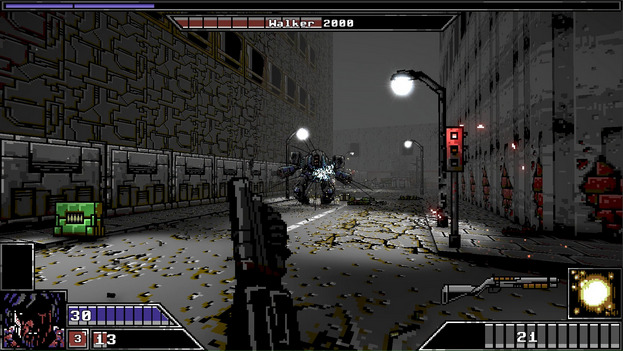 There are also some other unusual situations. At the end of each world, a boss needs to be killed. Bosses are imaginatively and interestingly designed, but as the game progresses, their strength decreases because our hero is more developed. Because of this, the first boss is the most difficult because you got a sense that itreceives the ton of bullets in itself, but you can't see affect on it, while the last boss is not threated to be expected from the opponent at the end of the game. This segment could be slightly better balanced, but does not mean that the battles are fun, only a little less challenging.

The positive thing about the Warlock Project is that there are no flaws that undermine its basic precondition - killing a heap of demons using a variety of weapons palettes. This means that the foundations are more than solid. and it is refreshing to play a game where scope does not exist and thereby you are surrounded by a graphics from the 1990s. This is one of the best quality games that aim at a nostalgic approach to players.

Players who have grown up on Doom, Hexen, and similar titles might enjoy playing this jumper, and the rest of the players who would like to see why the nineteenth-century shootings were popular would gain more than a quality answer. Additionally, the CRT emulation option should be mentioned, which is a handsome detail throughout this story and can further adjust the nostalgic atmosphere.