Rate this article "Paladins tips for tanks in ranked"

Paladins tips for tanks in ranked

Paladins is a game where just the aiming is't enough to win in competitive,the beauty of paladins is the huge amount of possibilities of customization and here we don't talk only about skins,every champion got 16 cards from which you pick 5( that's called a loadout) and upgrade them as you wish,the maximum level of the card is 5 and for each level you consume 1 point,you have 15 points on total.In the beginning of the match you also have to pick 1 legendary card from 4,it change the play style the most and the best pick depends on the situations.
To play competitive you need to own at least 15 champions and to have your account at level 15 or more.After you join a match you enter the choosing screen but you can't pick whatever you want like in casual,the first player of the each team have to ban 2 champions so nobody can pick them,after the banning,the first player that banned will also pick first and then 2 from the the other team and so one.

Is very important to understand that you pick what teams need,not what you want,that's why you better master at least 3 champions from each class before playing ranked.The choosing part is extremely important because many champions counter others and some fits together very good on the same team.The best first picks are tanks,a team without a good tank is dead,a team without good damage or flank but with good tanks still got chances .There are many option for tanks and many counters others that's why you either ban a tank either you take it so you cannot be countered.For example: Inara was one of the best tanks because of the durability and the cripple legendary card that makes enemies tanks to stay away from the point,the only counter was Terminus but he have to give up buying some important items like cauterize or in his situation ,nimble ,for buying buldozer. But few weeks ago Khan was released and with his cc immunity  card ,it made the most op card of inara useless,that's why you should take khan if the enemies got inara and to ban khan if you want inara. Makoa is one of the strongest tanks ,especially when you already played him a little,his presence on the point isf scary for most of the others tanks because his powerful canon which makes a lot of consistent damage even without help,he also got good escape abilities and a shield that can block many things and very important,it can protects your teammates so don't be selfish,use your shield and help that low Fernando to retreat.Let's not forget about the Makoa's most feared ability ,his hook,it can drag you from a medium range to him and if the team is at least good ,that enemy will be dead instantly ,because of that hook it can drag enemies like flanks before killing the healer or damage ,that's why you always should look after your teammates and save them if needed,the worst nightmare for flankers... The ultimate of makoa is very powerful ,it turns makoa angry,taking his hook as a weapon and hitting left and right  and gives him a speed bonus + 10k health ,you should use it when the point is almost captured so nobody will even think to try to contest it.BUT be sure there is not a drogoz too close,drogoz ultimate is the best counter of makoa,that ultimate turns drogoz in a fast flying lizard that can kill every champion if touched (except nando's  ult and ash's ult that makes them invincible) and a 10 k easy to kill turtle seems tasty for drogoz. 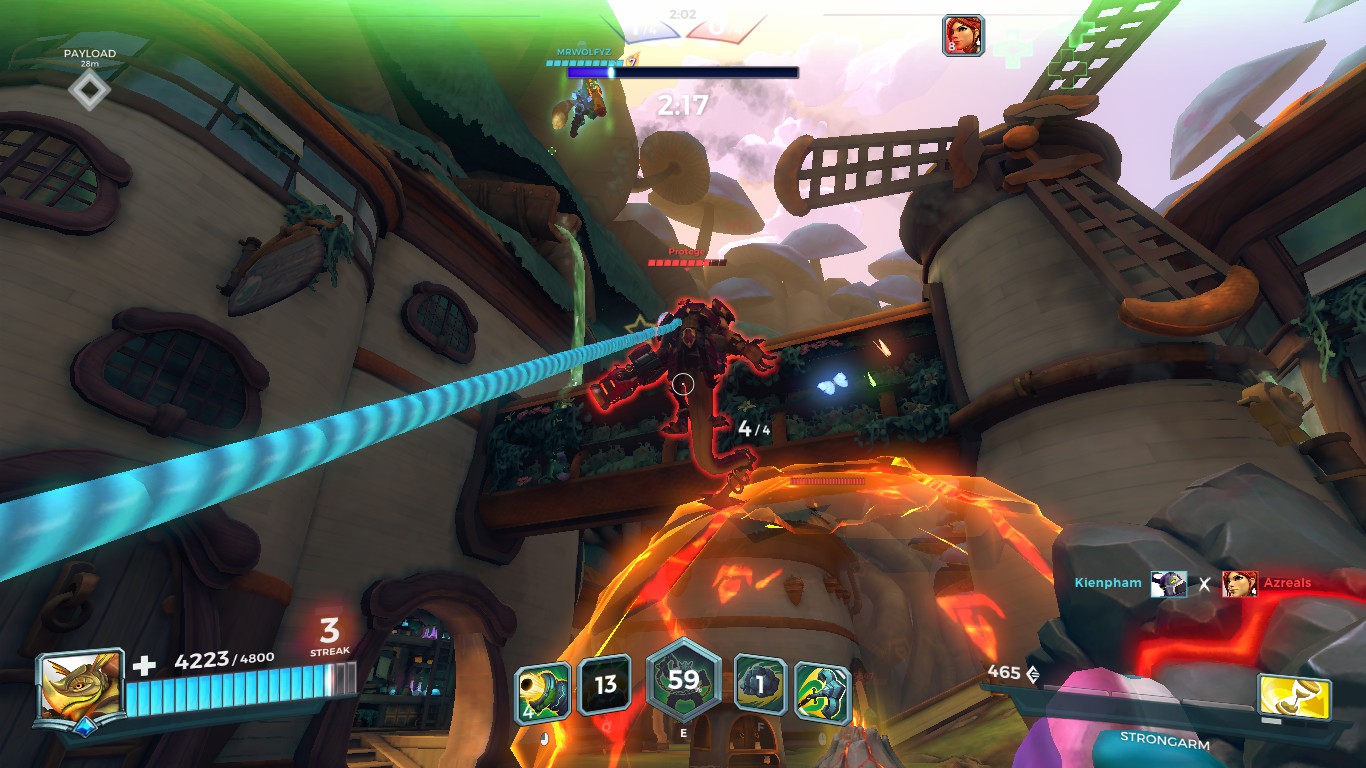 Makoa hooking a drogoz,some irony here ....
But you won't see makoa too much on ranked,he is almost always banned.Anyway here are some short counters tips:
Inara - countered by Khan with cc immunity legendary and Terminus with buldozer;
Fernando - countered by terminus with the stun legendary card , and Khan with his escape ability.
Makoa  - countered by drogoz ,
Ruckus being a huge target is countered by drogoz and mostly damages and tanks. His ult can be blocked by terminus shield or androxus's reversal.
Terminus - countered by tyra's fire with the cripple legendary because he cannot block the damage with his shield or escape the fire in the same time.His ultimate can be countered by androxus's reversal,standing near the explosion will absorb the 4 k damage and shoot back a 3 k damage plasma ball that will almost kill terminus ..again.
Khan - drogoz is a good counter because he can fly and  shoot khan in the head when he is using the shield which only covers the front .
Ash - her's ultimate makes her put a flag on the ground which gives invincibility for 8 seconds when she stay nearby,best counters are Khan ultimate,Makoa's hook,damba ultimate,seris ultimate,bomb king 's poppy bomb and torvald's ult .
Torvald and barik- countered by mostly damages.
Because of that you either have to pick the tank and ban the counter,either taking the counter and leaving the tank to the enemies.

Rate this article Paladins tips for tanks in ranked

not the best game

its only for those who play the game

Paladins is one of the best game ever. And I'm glad that someone wrote an article about the game.

Best game of all time. Another game that is so related to TF2 & Overwatch. Also, good written article!

Can i play fortnite on android??