Rate this article "Ori And The Blind Forest - Review"

Ori And The Blind Forest - Review

Even when we ignore the universally known truth that the forests are the source of the gas that we breathe in our lungs so that we can live at all, there are other reasons why we need them today more than ever. Before you go and check if you are reading an article about the game, I will remind you that this won’t turn into an article about the tree conservation, recycling or vegan diet. 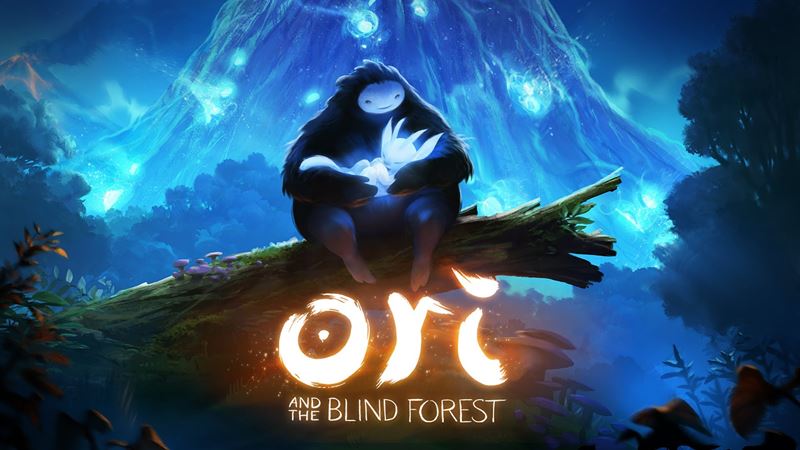 Any average citizen of the modern age has its head full of information at all times, those more and less required. While sitting in the car stuck in a traffic jam, holding one hand on its back cause of the pain from excessive sitting and with the other checking notifications on the smartphone, you can’t not to think about peace and quiet that you can find in a walk through the forest or lie in the grass and breathe in clean air, listen to bird singing… That is how freedom should look like. I believe that each of us would need such a battery charging therapy on a weekly basis to bring our minds back to the normal flow.

If you’re not that fortunate enough to have a forest near you or you are simply a couch potato, I have one interesting alternative – The Ori and The Blind Forest. I can’t fix you back pain problem, but I guarantee that you will be fascinated with the breathtaking beauty of the Ori’s world. 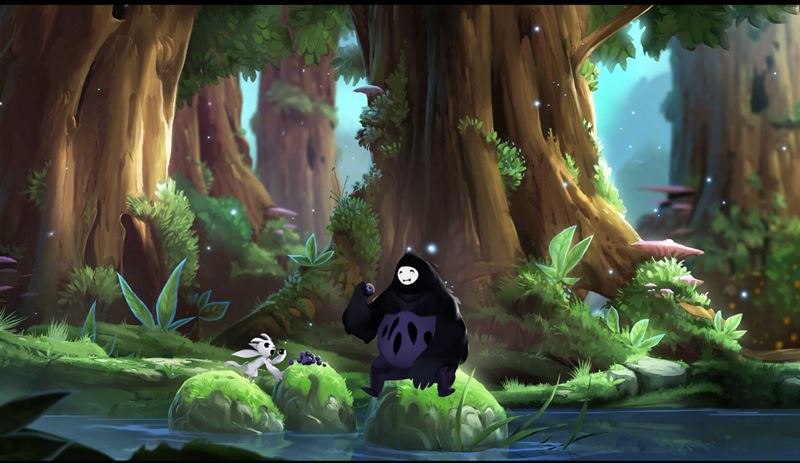 Maybe it's a bragging thing to say about a 2D game, but when you play this hand-crafted game of a fairy tale style, in which every single thumbnail looks like a revived artwork, you’ll be completely clear about what I’m talking about. The whole Ori’s world is just incredibly lively, first of all thanks to the genial animation of each of the many layers that we see on the screen at any time. Almost no element surrounding you is static, while no area where you can jump in your memorable adventure is not the same as the other - each has a completely unique look and its own life. 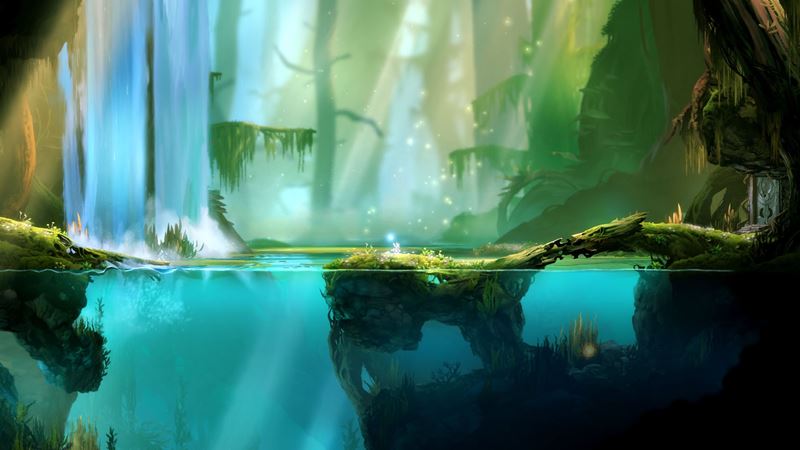 It is indeed a true work of art when with all these phenomenal visual style they created a music background on an equally high level, the wizards behind this game has done it. A sophisticated orchestral soundtrack makes playing more memorable experience and rounds up the extremely positive impressions on the audio-visual presentation.

Little Ori is moving so fluently and responsively that it is extraordinary satisfying to control and overcome obstacles by executing numerous deadlifts whose number is only increasing over time. Certainly one of the most sensible gameplay elements is a perfect timing of a new things; you won’t get bored because you will constantly gain new abilities, learn how to apply them in practice, getting used to new opponents, and discover new areas.

In fact, the longer you play the more interesting it get because in the later stages of the game you are more skilful in battles, fighting with an enviable amount of moves like double jumps and wall climbing which you can do without any wait or thinking. Probably the most entertaining ability is the so-called bash with which you reject the projectiles that go to you in one direction while Ori is moving in the opposite direction. This ability will be used to quickly move and overcome the obstacles, but at the same time to take away the life of the villains who stand in the way, and it requires a quick reaction on the direction you want to send this exact execution. 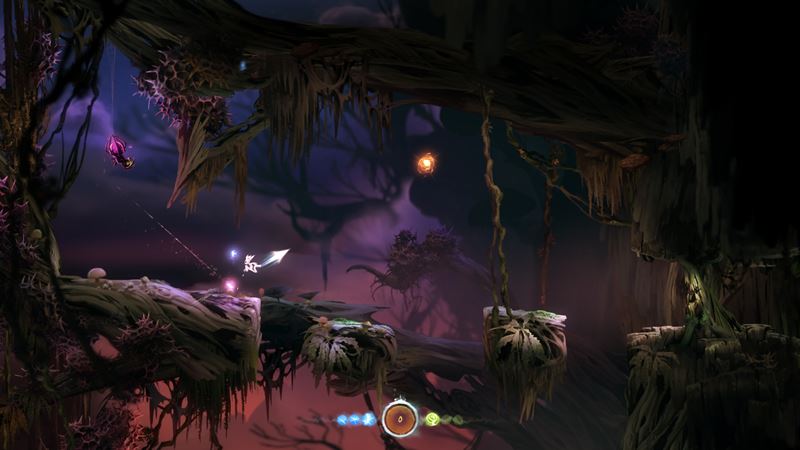 It should be noted that this is not an easy game. You will often die – until the very end of the game you will surely count your number of deaths in hundreds, and as it is in life you will learn from your own mistakes when you can’t learn from the others. While the more complex obstacles are just the cause of greater pride and satisfaction once you overtake them, I believe that situations in which difficulty will increase suddenly will be frustrating for some. More specifically, it is a few scripted events where you have to escape from a certain area full of obstacles without a single checkpoint - you will simply have to learn the whole area.

Game saving system is well made; you can save your game at any time using small energy balls that you collect while playing, but it is important to know that the same energy balls can be used for a stronger attacks, and its quantity is limited so it’s better to think twice before using it. When you save a game, you create a soul link that you can later use for collecting experience points which you use for upgrading abilities. 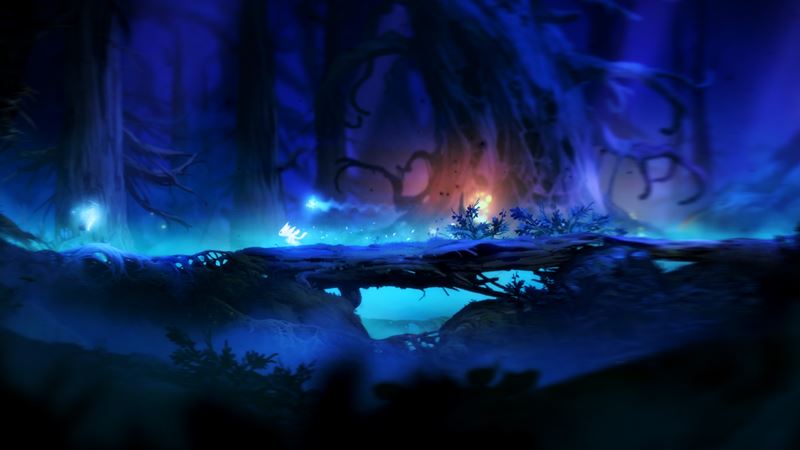 The opening sequence of the game is effective and emotional, wisely imagined and serves as a very good introduction that causes quick connectivity with characters and the world. The presentation of the story is interesting, the hassle of the cutscenes changes its story through the game itself intriguingly without the any dialogue. Still, the subjects that have been streaked through the story have been overwhelmed a bit too many times and I’m impressed that by the end Ori never succeeded in reaching the emotional peak that was at the very beginning.

Ori and The Blind Forest attracts you with its beautiful audio-visual presentation that keeps you until the end successfully with its fluid, responsive and intuitive gameplay. Its relatively short campaign, lasting about six to nine hours is easily justified by the high rhythm and fairly decent pricing. Therefore, I definitely recommend that you lower the blinds, turn off the cell phones for a few hours and enjoy the treatment of Ori and its Blind Forest.

Rate this article Ori And The Blind Forest - Review

This is very rage game, but i like it :D

its hard game and i like it because its adventure game

I love this game theme

Yup it's has a good story
Nice article keep up

The art is incredibly unique as is the background story I will be sure to check out the game in the future. The writng in the article has no flaw and believe it to be flawlessly written.
I approve!

this game somehow remind me to hollow knight