Rate this article "My opinion on Growtopia"

My opinion on Growtopia

Punch. Build. Grow. This is GrowTopia for you! A sandbox game with no goals. Have the fun of your life visiting player created worlds, watch their featured videos. Trade cool items. Get gems and buy all the fun things in the game! Or maybe, craft some of the most mysterious items that not many people have!

Who created the game?


GrowTopia was crated by Seth A. Robinson and Mike Hommel in 2013, but was late bought by Ubisoft and has been getting lots of updates ever since. It's supported on IOS, Mac, Windows and Android.

What do you do in this game?


It's pretty simple. As the introduction says, it's punching, building and growing. Pretty simple, right? Just make an account, create a world by typing a name that hasn't been taken and start doing things you want. But here's a catch. You don't have any items when you create a fresh account. You'll have to grind, learn item recipes and only then you can make what your imagination decides to. Although it used to be much more simple before 2016, the core elements are still there. 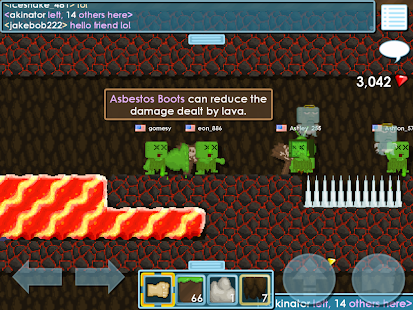 What about the community?


The community of this game is fairly friendly, although you can meet some rude people here and there, you'll find friends pretty easily. Don't be deceived though, as many players in this game tend to try and scam newer players who don't have an idea of what's going on, so I recommend you read the game rules first when you join a world. There are also worlds that teach you everything you need about the game, if the tutorial at the start doesn't help. Join the world "start" to get a better tutorial, and if you don't speak English well, you can find the same world with a different language by going to the doors near the spawn. If you find anyone trying to scam you, make sure to report them. The moderators do their job well and will punish the scammer. Remember this line: "Stop, don't drop!" 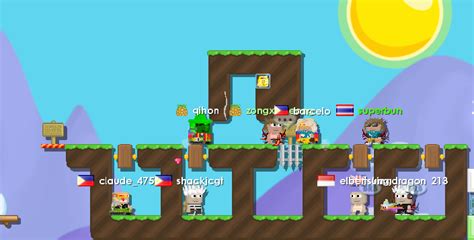 What type of worlds are there in GrowTopia?


Trust me, there are many. Trading, parkour, shops, minigames and much more. You can create farms to splice your trees. Shops to get rich and become popular, and art worlds, which can even get featured in WOTD (World of the day)! There's one thing though, you need to lock your worlds so people can't break your things. There are 4 main locks. The small lock is the cheapest one and will only locks 10 tiles and costs 50 gems. The big lock, which locks 48 tiles and costs 200 gems. The huge lock, which locks 200 tiles and costs 500 gems. And Finally, the world lock, which locks the entire world. There are a few other locks, which mainly act like a world lock, so I'm not gonna talk about them. If you're inactive for a 180 days your lock can be destroyed by a punch. Though world lock can't be destroyed when you're inactive.

I hope you have a fun time playing GrowTopia! It's free and doesn't take up much memory, so you should definitely try it out. Goodbye!

Rate this article My opinion on Growtopia

Nice game for ever

good game not the best but good to waste your time...