For a long time, I am playing different mobile games with different style and classes until I accidentally saw this game advertisement and in the game's trailer seeing my favorite heroes amazed me. In this article, we are going to talk about “hyper heroes”, one of the Addictive mobile games have ever made.

I'm not going to give you a headache but you have to know just a little about characters that present here in this game. characters like Vergil and Dante Sparda (twin sons of legendary Sparda in Devil May Cry video games), Loki (Thor's brother, one of the most popular characters of comic books and Marvel studio), hell boy, guan yu from dynasty warriors series , king kong , monkey king, sloth from ZOTOPIA animation, some characters like john snow and Daenerys Targaryen from game of throne, Legolas from Lord of the rings , Athena from wonder woman and some others character from Japanese animes. What I'm trying to say is that you can find many of your favorite characters in this game.

Now let's move on and talk about its gameplay.

Your journey will be started in the middle of a war where four heroes are trying to save one of their friends that is captured by an alien monster. at the start of the game, you have four heroes, that in every turn you can move just one of them. all you have to do is taping on your hero, slide your finger on a screen and send your hero toward the enemy. every hero has its own special ability that you should know in order to get the best result. 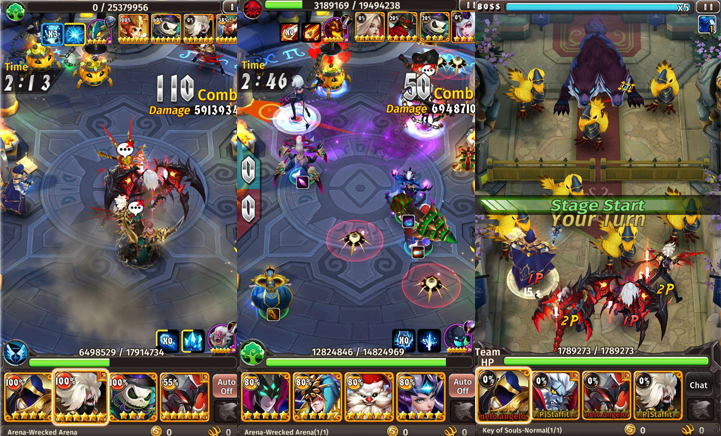 you will face two types of challenges here, PvE(against AI) and PvP(against other players). In PvE, you can completely control your heroes however in PVP mode you will just manage your team and will send them to the battlefield. You should analysis enemy teams and then send your best team to smash them. you can also create a guild with your friends and during guild war attack other guilds and win valuable prizes Also, there is a coop part that u can get help from other players and attack PvE enemies for more resources to upgrade your heroes.

"if during your hero's movement he/she across from near of your other heroes they will attack to the enemy with their trigger skills. what is the trigger skills? we will reach that soon."

you will have Four types of heroes: Heroes have 3 levels here. 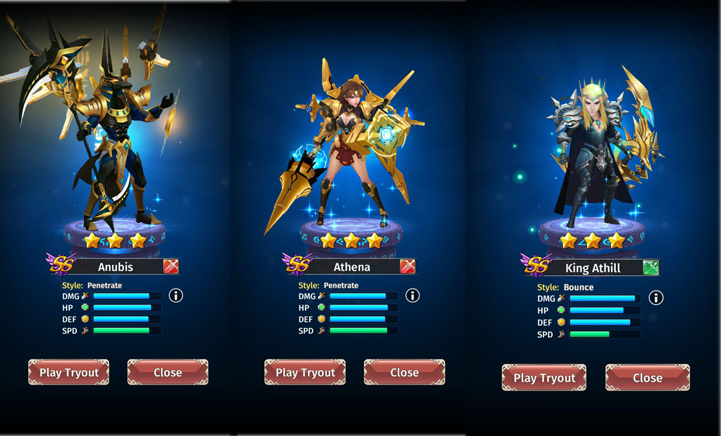 some heroes have great damage, on the other hand, some of them have mastery in skills but in some cases, they have both, good damage and good skills. you can earn the ss heroes during the game but not all of them, you should pay for others.

Every hero has four abilities.

in this game, there are many skills, each hero, based on their type, may be able to use some of them for example:

The game can be rated as a normal-graphic game for mobile platform however fantasy design and visual animated effects made the game's environment so cool. collecting all those details of characters in this kind of graphic is amazing, I mean just look at the designing of heroes, yes it is too simple but each hero matches his real character perfect. 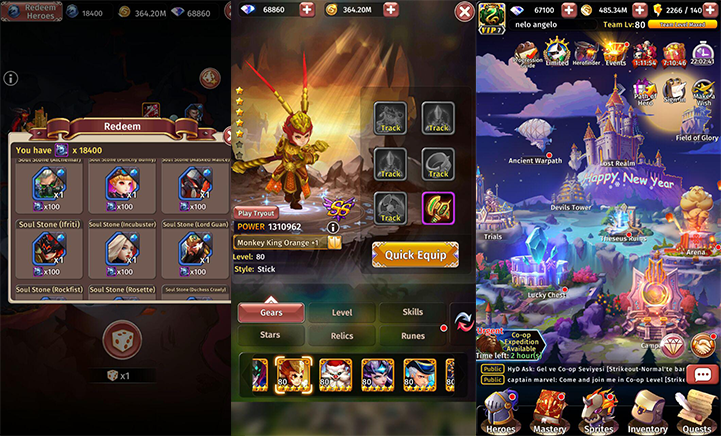 here in hyper heroes, a player with high paying-rate has the upper hand, some heroes should be bought there is no other way to get them, heroes are expensive, the time to get a hero(collecting the cards) is high and you should be always online with a stable connection due to real-time battles. on the other side, simple graphic with details, animated effects, the variety of lovely heroes, real-time battles, co-op battles (cool part), and entertaining events are some of the good points of this game.

with all these good points, with each update and new heroes, the game is trying to entertain you for a long time as it entertained me during these 2 years(my guild hit the 4th place in Europe server). you will have some great challenges that make you enjoy this game. "Which team will be the best team for def? And which team should I use to attack this player?", these questions will be with you all the time.

It is a good genre

Nice. Work on this

few grammatical errors but on the whole good article

Proper work = Yes from me.