Anyone who travels frequently knows about the phenomenon of distance reduction when passing through the same route several times. The first trip is always the longest because the experience is unmistakable, and migration to a route more often makes it a journey every other less exciting time. This is similar to games, especially those of the sandbox type in which the bad design of the world can kill a sense of freedom if the player is forced to return to a certain point on the map. Fortunately, the open world of Horizon Zero Dawn is like the first journey - the world is "growing" when the heroine Aloy starts asking for answers to personal issues and finds himself in a much bigger and more important part of the event.

An introduction to the post-apocalypse of this game is perfectly hit. Aloy does not know the world further than the small piece of the folder you are offered in the prologue. The very beginning takes a long time, about two hours, and when your limited territory becomes tight, Aloy comes to the rest of the world in wonder without knowing what's in it - just as you do not know. I would only like the developers to completely blur the map to make the size of the otherwise huge world a surprise to the players. So at the start you can see where you can go, although at least you do not know what kind of terrain is in front of you - whether it is a forest, a jungle, a desert, a frozen ground,

The world of Horizon Zero Dawn is a wonderful place. You spend most of your time in nature, which in itself does not have any memory locations. Anyway, the design of the environment is such that you will be guaranteed to bump into beautiful looking scenes, whether it is a sunset passing through dense vegetation, a moonlit jungle or a view of a mountain range. Memory locations are reserved for cities, or settlements of four tribes. Each tribe has a different culture, and the most beautiful one in the city of Meridian that would remind you that we have not yet got the game with the true atmosphere of ancient Egypt, or at least the game that was brought closer to Horizon.

The design of the environment is such that you are guaranteed to bump into beautiful looking scenes, whether it is a sunset that runs through dense vegetation or a view of a mountain range. 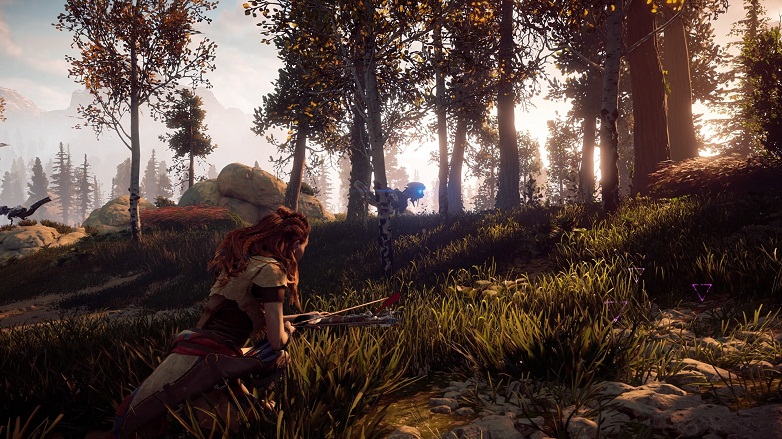 Meridian is also the place that you will most likely return to as it serves as the main hub, meaning that the open world of the Horizon is not completely deprived of jogging on the same routes. The game is actually designed to play as a hunter and it is different from the similar titles we have seen earlier.
Each piece of the Horizon reminds you of something else, so the whole game is not particularly original. Horizon has picked up gameplay elements from Tomb Raider, Far Cry, Witcher, Dragon Age, Assassin's Creed, Killzone, and loads of other games.

The only part of the game that is not very diverse are side missions. The players in the game should not be underestimated because they are predators until you become a seasoned hunter.

What saves boring missions and the lack of originality in mechanics is the hunting gameplay mentioned earlier. Namely, you must not underestimate the enemies here, but you must approach them with caution. Robotic dinosaurs, and other animals like bulls, rhinos, birds, tigers, etc., have their specifics and are far the best part of the Horizon

The diversity of enemies and their behavior is the strongest side of Horizon Zero Dawn.

During the main story the game gives you such opportunities, but to use them you need to spend time and other activities in parallel, like exploring factories where robin dinosaurs are being created. This jigsaw also combines a background story from the past that is as interesting as the main plot. The Horizon Zero Dawn story has a layered look like Assassin's Creed

Restricted but cuddling Aloy is undoubtedly the most funniest new protagonist in the last few years. 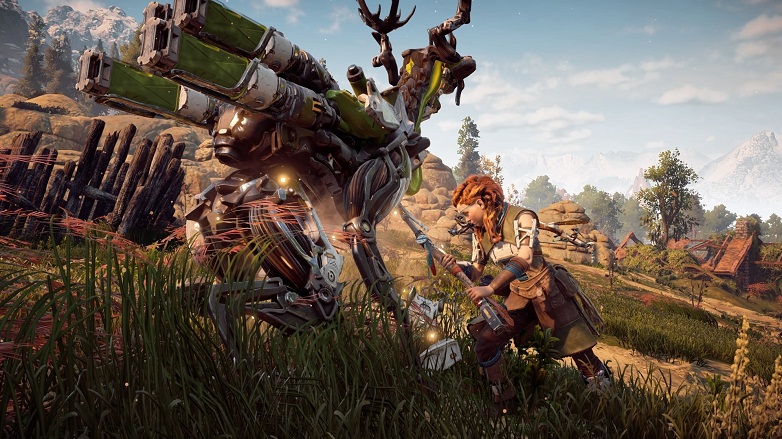 Aloy is undoubtedly the most funniest new protagonist in the last few years. He is pretty reserved personality and has no particularly emotional performances, but he is a chore like Nathan Drake, and makes useful commentary the situation and extends the action.

The voice acting was top-notch and it did not save on the dialogues. For all the unknowns in the Horizon world, you can get an explanation and inquire about the rich lore around which game creators have visibly made the effort
The game is a technical achievement on the level of Uncharted 4 and Witcher 3, especially in the fact that the weaker PlayStation 4 spins without major problems. 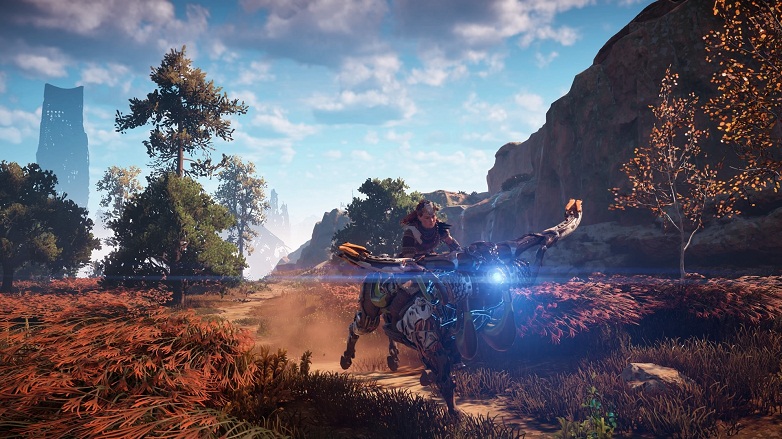 The water effects are below the standard we expect from today's games; vegetation is mostly static and Aloy passes through it as if it did not exist; the transition of the weather conditions and the time of the day is often abrupt and unnatural; loading textures occasionally know the delay and so on.

The five-year effort of Guerilla Games on this project has resulted in a play that will mark the current generation just as the PlayStation 3 consoles, for example, marked Uncharted and inFamous. 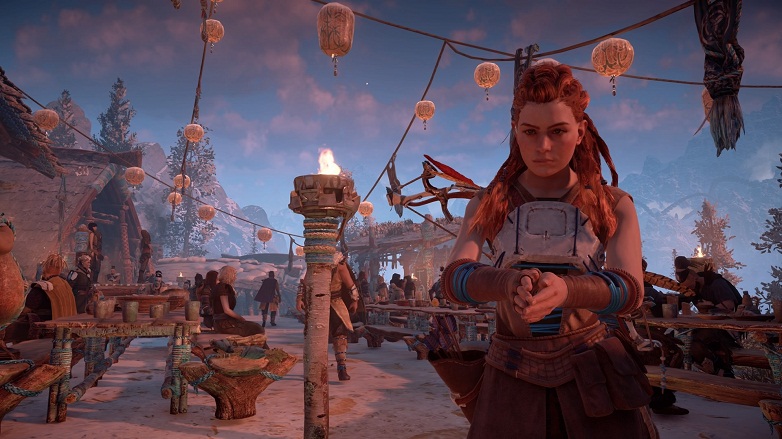 Nice, only for consoles(

this game is amazing dude , everyone loves this game , epic graphic , good story , ...

Great article. Keep it up :)

It looks like this is your work,soo good job.