Gang and crime games are not limited to 3D games or mega games, it is the development studio Crazy Monkey Studios offers us a game of two-dimensional gangs but not in the form you can wait for him, Guns, Gore and Cannoli action games with hand drawings do not try to take a place between Gang games with a serious story and black, but to move away from it all.

In Thugtown, the game puts you in the role of gangster Vinnie Cannoli with his hat and tie. You have to try to find an important person in the city to get the money after you finish the task. After arriving in town you face a welcoming committee of zombies and gangsters. And between reaching the goal and no matter what happens in the city for as long as you have a large arsenal and variety of firearms.

The game is easy to play with simple control, all you have to do is move forward and use your weapons to eliminate all the enemies in front of you, and to put you in the picture better The game is much like Metal Slug game, but less action, shooting is possible only for both sides Left and right, without the ability to fire up for example or down, and to meet the enemies on the platform above you, you must jump to them first and who was shot or kicked them to remove them or drop them. In the beginning, Cannoli will have only one weapon, and a stage across the other will be the number of weapons you have bigger, machine gun, rifle, rocket launcher, flamethrower and other weapons, the variety of weapons is beautiful and with the addition of bombs nothing can stop you. 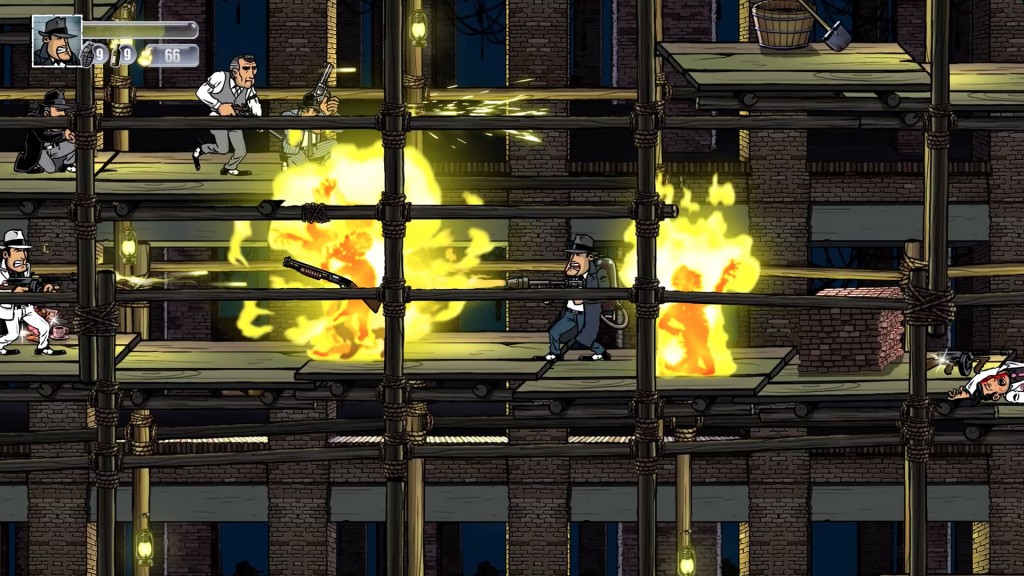 The game has a level of challenge between the medium and the high depending on the degree of difficulty that you have chosen, and the full focus on the fire and the confrontation of enemies, you will find that the style of your game has improved significantly as you progress through the stages, each enemy has a specific way to make killing easier than just shoot it And if you do not take an extra player or 3 players to protect your back with the support of the game for local cooperative play, even though I wanted to see a stage of play. Collective no It is difficult to find other players with him, but it is nice to see the game supports local cooperative play.

- Some minor additions need to be played - some stage design is needed for additional work (does not affect the overall look) - it could have been longer.

// Gather 3 other players and try this game, because it is a good choice for anyone looking for a game with a cooperative game, easy, simple, beautiful and fun.

Guns, Gore & Cannoli is a reasonably proficient side-scrolling shooter that grows somewhat tiresome through repetitive combat and unpleasantly clichéd character design. It's an enjoyably brainless diversion - especially in multiplayer - but it's one that only really works in small doses.

Very Good for kids and it verry good for everwhone guys