Dragon Awaken is a browser based MMORPG in which your character progresses in power by increasing their Battle Rating(BR). Your BR is composed of your characters power, your heroes(Your summons), your dragon, your mount etc. You quest, complete dungeons, and take part in world events to level up. If you are considering playing this solely for the gems that it offers then the first two tasks for this game are suited for you. You must fight alone, fight with others, and play mini games to gain power in Dragon Awaken. I will show you how to earn gems and introduce the basic concepts of the game to you.

Before you do anything make sure you do everything right so you get your gems:
If you are not new to the process feel free to skip this section

Look for Dragon Awaken in the game section of Gamehag, get to the "Play for Free" button and click it.
Register for the game with the same email you used for gamehag, I find I have less issues later when I do this for any  game.
Make it easier for yourself by making your in game nickname the same as your gamehag nickname. I didn't do that for this game but I still was given gems on my first try.
If you are actively playing you should switch to full screen mode. It is on the bottom left of your character portrait.

If you have problems send a ticket by clicking on Misty. If you get rejected make sure you completed the correct conditions.
If you were rightfully refused you did something in the segment below

"Your screenshot could be refused because of one of the following reasons:
1) The game registration has not been made through our website so we could not verify if your account is new, as we focus on equal chances.
2) The screenshot did not reflect a properly completed quest.
3) We have detected that you have more than one account on our website.
4) There was an attempt of fraud, e.g. by uploading a fake or wrong screenshot. Please, verify carefully, which of those reasons occurred, then try to complete your quest once again."
-Misty 2018

If none of these apply to you then keep on trying, they will give you your gems eventually.

Okay now that that is out of the way lets look at what you have to do.

THE TASKS AT HAND

The first 15 levels of this game are a joke. Just by clicking through the main story quest you will get to level 15. You can completely space out. The first 15 or so levels are the tutorial of the game. It will introduce you to the beginning features of the game.
When you are level 15 take a screenshot resembling this: 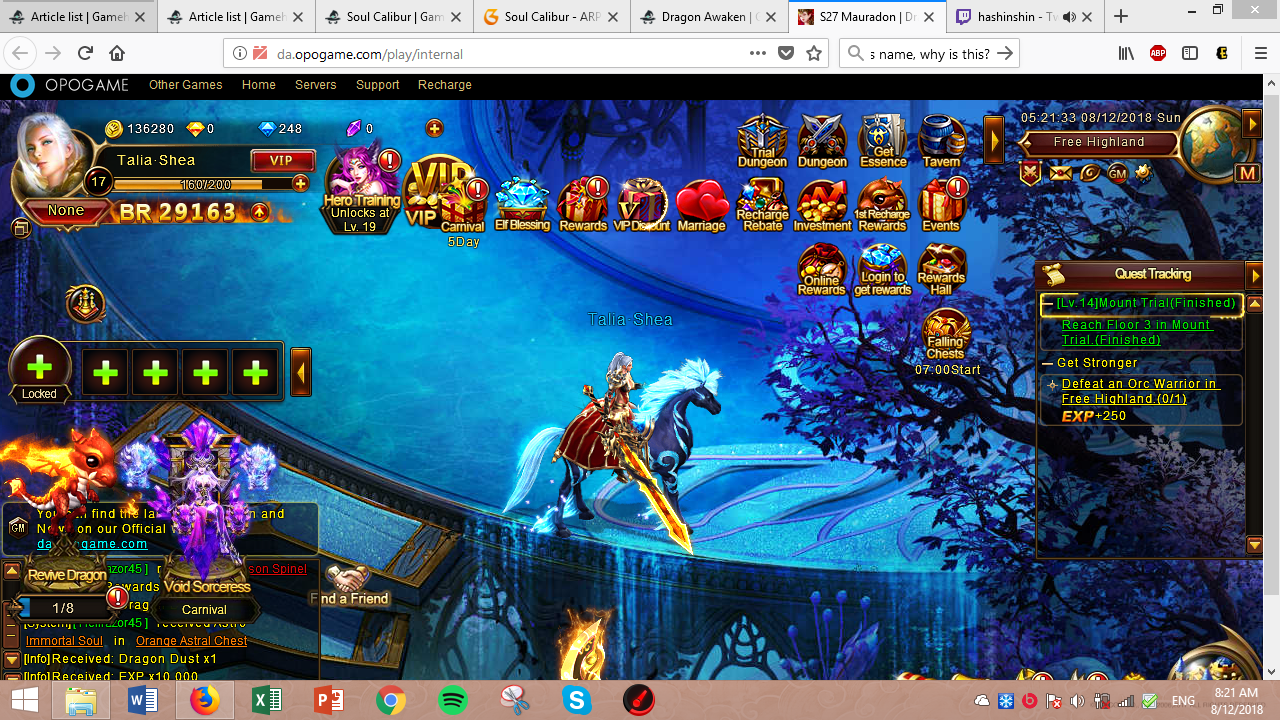 Advancing to level 30 is rather easy as well. It will take a bit longer, because as with most games the leveling slows down. If you find that you have completed the story quests and you are still not at the next level go to your dailies and complete those. The dailies will guide you to the dungeons, trials, and world events that occur within the game.

Now this one is a bit more difficult. I've been playing this game for about 3 days now and I've been playing on and off throughout the day for nearly the entire day. And with all that playtime I'm still only level 44. My tip for reaching level 45 is to log on, do your main quests, complete all your daily events, and participate in a few world events. If you are not doing one of those three things then your effort to reward ratio is significantly diminished. Farming dungeons or mining is not an efficient way to leveling. Just do something else with your day and come back to the game the next day. If you play this game off and on for around 5 days you should hit level 45. If you want more specifics then continue reading.

A LOOK AT THE GAME:

Starting Off:
The tutorial and the beginning quests do a good job of introducing you to the game.
However there are A LOT of features in this game

The interface is incredibly crowded. In most MMO's your screen is crowded with your skill bars. In this game however your screen is crowded with dungeons, promotions, world events, and ways to upgrade your overall power. It can be incredibly overwhelming, and as you progress it gets even more crowded.
My suggestion is that when you are actively playing this game switch to full screen. The button for this is at the bottom left of your character picture
It can be a little confusing so I'll break down a few of the most important features. 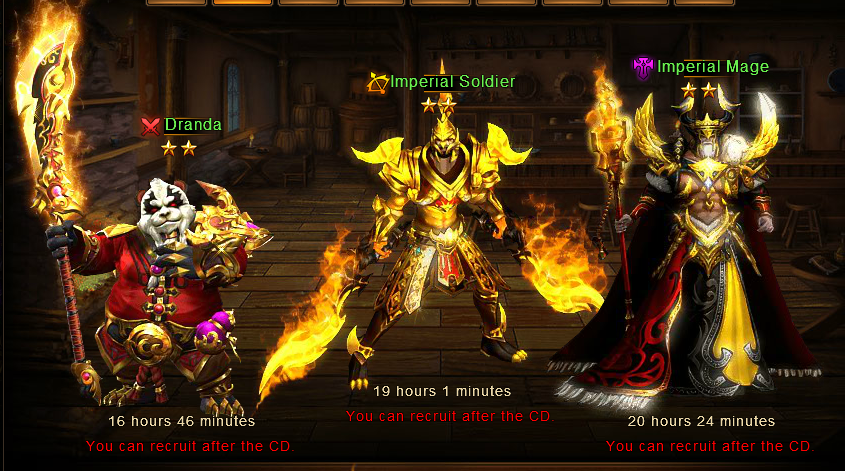 Heroes are the party members that will help you through the majority of the games content. They are a major source of your power and you will use a currency called essence to buy them. As you progress in the trials more heroes will be available for purchase.
Let me break it down simply. To get heroes you need essence. To get essence you need cards and gold. You get cards from quests, event rewards and other miscellaneous sources. To activate these cards you need gold. Gold in this game is not a scarce resource. Your greatest gold drain is the astro system but you don't have to worry about that yet.
Once you unlock your heroes use experience scrolls you get from dungeons on the heroes you are going to use. Make sure you use your scrolls on only FOUR heroes. This is because you can only use four heroes in combat. When you get better heroes you can use the inheritance feature to transfer over all status increases from your old hero to your new one. It is inefficient to distribute your experience scrolls and other such resources evenly. 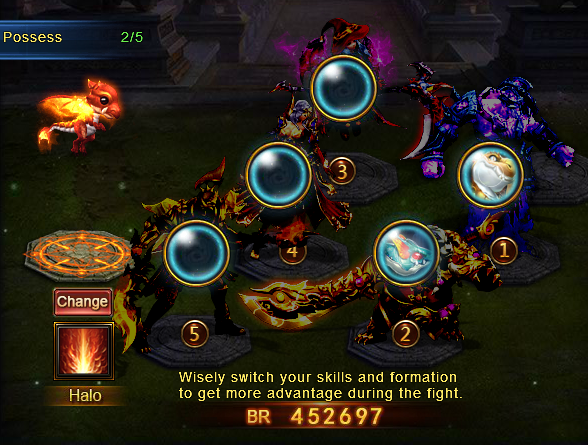 Who would have guessed that there were dragons in this game? You start off with dragon hatchlings and you can grow your dragons in size and in level as you progress. Here are few key things to note about the dragon system.
You get one dragon that fights with you. It acts as an extra party member and should be constantly changing between your dragons. At first you will only have one.
But as you gain more dragons you can use your extras as possessions. They are imbued with the spirit of any hero in your party and buff their stats.
To start off with you upgrade your dragons with dragon essence. You get this from EVERYTHING. When you kill a monster, when you kill a player, when you complete an event. If you do something, half the time you are gaining essence. When it comes to essence distribution it is wise to keep the levels relatively even.

A very important feature for this who want to level up are the dailies. The dailies guide you and tell you the avaliable methods for increasing your power. There are two categories. There are standard daily events and timely events.
Standard daily events are events you can complete at any time.
Timely events are world events that happen at a specific time of day.
The Timely events are actually quite fun. They involve a lot of PvP content so if you enjoy getting destroyed by players that have spent more time and money on the game than you then have at it. But you will also get carried by the same players very often. If you are relatively strong then they are fun, but if you are weak then they can be frustrating. This is a game where there is very little actual skill involved. As a result the outcome of a battle is usually determined by the player with the higher Battle Rating.

Aside from these three features there are a few others that I have to mention:
Factions: There are two factions, join one, attack the other.
Either pick the Supremacy, or Amity

Clans: With each faction there clans of 20 players. This will be your guild, your core group of players to work with.

Land System: Each player gets a portion of land that has various minigames that you will unlock later. For now you have the Altar and your Farm. If 10 people pray at your altar you gain the means to upgrade your land. When you upgrade your land you gain more passive gold income. Add plenty of people to your friends list whenever you can. It is to your benefit. They can help you take care of your farm. At your farm you can plant exp, gold, diamonds, or whatever type of seed you want.

Mounts: Early on you get a mount that you can upgrade. You can collect many of them and evolve them just like your dragon. Use the items Mount Stones that you get from dungeons to upgrade your mounts.

Skills: You start off with only one class of skills but you get three others as you level 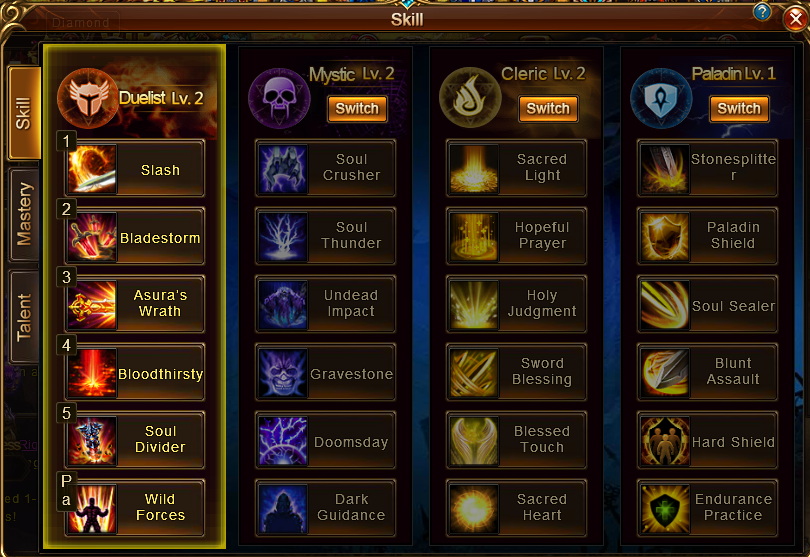 A player picks one and can switch between the four in between fights.
This is what each does:

SHOULD I PLAY THIS?:

Dragon Awakening has actually been a game I enjoyed. I typically will do something else and idly play this game. The sheer amount of things to do is impressive and if you like mobile games like Lords Mobile, or perhaps the other browser games on this site you will enjoy playing Dragon Awakening.
However it would be dishonest of me to say that this is a masterpiece. The game is Pay 2 Win. If you are not spending money on this game you will never be a top level player. There is also very little skill expression. Your formations and strategy have little importance on the outcome of a fight. If you beat someone it is because you have higher stats. And you will win because you either spent more time, or spent more money. It will never be because you are more skilled at the game than them.
I would not play this game seriously. Instead it is a nice game to play while you are doing another activity. It is geared to that with its AutoFight option. This is a game that I will probably play for a bit longer and I will get to the third gem task because it wasn't work to get there. The game is a good time waster. Frankly I would prefer this game as a mobile app. I definitely suggest doing the first two tasks to try out the game. But if you are not having fun it is not worth getting to level 45 for the third task.

I only got to Task 2 before this game was removed I hope they bring this game back again, so I can put these helpful bits towards task 3