Rate this article "For Honor - Review"

I'm one of those who, when they see some interesting title, are trying to avoid anything related to him to make the game more interesting when a moment of gaming comes in. That is why I was disappointed when I realized that for her honor behind her fight she did not conceal much more than she had already shown before going out. But maybe that's better because it would have the other towers on which to climb.For those who have been under the stone for the past years, it is Ubisoft's attempt to show us how to look like a medieval war that has never been a history - one between knights, vices and samurai; all of them are well located in the neighborhood. When one of them began to start on the other side, there was a struggle which for Honor's chief adut - in a sort of stone-scissor-paper system, choose the position of weapons and attacks to prevent upcoming blows or to pervade other powers.

This whole approach is somewhat authentic, and every moment of the moment carries a sensitive weight with a focus on precision and strength. Blind wizering will not lead you beyond your own grave, because besides stamina you should look out for many other things. All this from a fairly simple, perhaps even banal system, brings an inescapable depth of conflict in which tensions do not even matter. In this way, the frauds often pass into psychological outcry, and sometimes they resemble the controversy about who will blink first. What's so interesting in multiplayer games. No sarcasm. Seriously.

As a title that is primarily praised by its multiplayer, some are still surprised that For Honor tried to create a single player campaign, and those with a "story". Although promised not to be included in this first multiplayer experience, this claim is not mentioned anywhere that a good story is going to be done, which is also why I used the quotes earlier.

"The story at For Honor has nothing to say to you that you do not already know, including that the wars are dumb, but the war is a must.


It is to be assumed that stone-scissors-anti-artificial intelligence paper will be tedious to anyone, and at least this does not help a fairly linear array of battles where players rarely wonder where, who or why. There are also some ridiculous scavenger bricks that have been explored by the For Honor's beautiful locations, and at least do not make them exciting. I would like to say that there is a campaign for players who do not yet have access to the Internet, so even those with artificial intelligence can try this fascinating and fun swarm. Unfortunately, however, there is Ubisoft here, so count for singleplayer as an internet connection. So much about that. 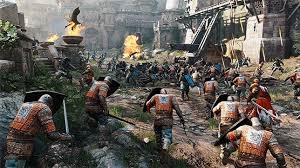 "Forget singleplayer, this game is bought and played by moving the boundaries of multiplayer fronts.

I just saw there stuff sitting on its own - a world map with daily moving boundaries showing the culmination of the individually played matches. With about twenty different battlefields and weather conditions, overly detailed customization of all parts of the armor and weapon of each character, I finally got enough water to make a little and dive.

Daily missions would give me the reason to jump a little on the battlefield every day and help my colleagues, and besides being motivated by extra prizes to try me in a slightly different approach, at the end of every match I would be looking forward to seeing the new toys unlocked. What really made me happy was the fact that besides perfecting the skill of swordsmanship, multiplayer progression and my own style of struggle. Everyone suspects that For Honor was not even aware of what he was trying to do then I completely disappeared, but I realize that many do not want that "carrot" hanging on the stick.

Naturally, there is a fitting and forgotten "cash shop" that offers faster progress with more prizes if the wallet is once again taken out of the sun. Personally, it did not say too much that most of it was designed based on mana and virtue. You see, each new subject gets one stats down while dropping another, enabling you to customize your characters more to your own style of gaming than to direct your credit card directly to the competition.

You can get to most of this with simple play, so I think it makes no sense to raise the alarm. Perhaps a bit bigger problem is the peer to peer system of connecting a player, which sometimes causes a tie to break when a player leaves the match. Currently, we have not been so often in the PS4 version, but I still think it's a little sad that such a mega-corporation like Ubisoft can not handle several official servers.

Playable modes may not be somewhat overly unique or broad, but they still cover all the necessary basics that a player might want. The classic deathmatch, duel, point capture and last man standing give enough choices to everyone here to find their place, at least to get started. With rounds lasting two weeks, and up to ten weeks in seasons, it remains to see how war will develop further. We know only that For Honor's destiny will ultimately only depend on Ubisoft's subsequent support with additional content that should prevent him from playing ruthlessly.

Rate this article For Honor - Review

this game is good but its really hard to play

I think its dope

One of my all time favourites. Incedibilis! Too bad there are no related tasks to in on gamehag as far as i know. (Have you seen the yellow sign?)