Rate this article "Entropia Universe Free to Play or Pay to Play?"

Entropia Universe Free to Play or Pay to Play?

With the rise and fall of MMO. Entropia Universe had been surviving for nearly 15 years. Here's an inside look on this game and how a free to play game with Real Cash Economy going to survive in this era of game apps. Before i start, this game is especially emphasize on the virtue of patience. Without them, this game will not be an enjoyable experience.

Like any other traditional MMO, Entropia Universe was launched on January 30th 2003 by MindArk a Swedish company at the time where online games are booming. With a slogan Real Cash Economy plus free to play to boot, it attract countless people to try this game. Although it's a free to play game, players can still deposit to gain more ammunitions and resources.

But the most important aspect that MindArk does is to not impose player any monthly subscription or pay money in order to access higher level items.

Unlike traditional MMO where players are stuck with 1 job title, the thing that makes Entropia Universe uniques is that they let the players choose what profession they want to major in. Be it tailor, trader, crafter, hunter, trader, miner and healer. Player can even do all those profession mentioned. But in order to level up on this profession, players need to invest their time and money into skills related to the chosen profession. For example, leveling up Hunter profession is done by investing in weapon skills from hunting Mobs and also leveling up Mining profession is done by constant mining run can be seen in the video below.


As do any MMO features, MindArk establish trading system and Auction House where players can trade between them to gain resources or to make some profit from accumulated commodity. 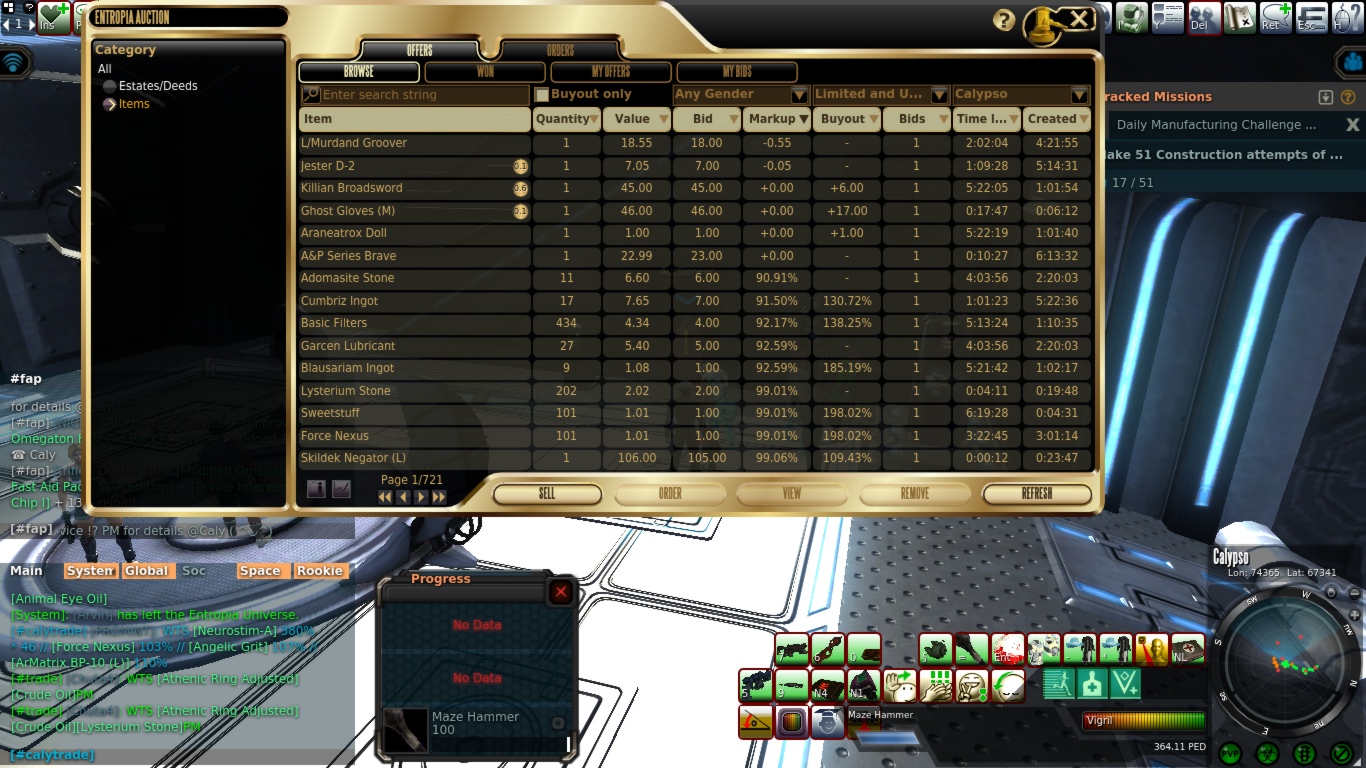 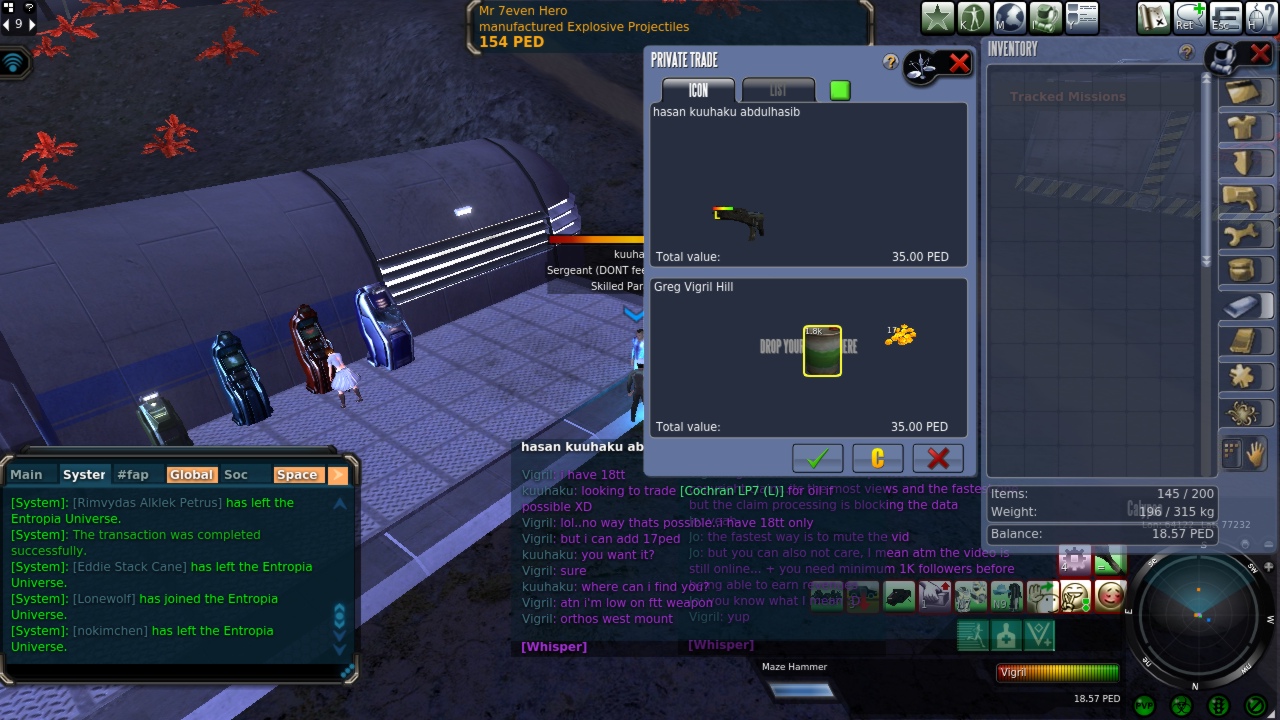 With decades of experience, MindArk already have a mature trading procedures that able to avoid players stealing items without paying or scammers from taking advantage on the system much like the ones can be seen in Fortnite. Both parties able to see the exact value of each transaction as seen above and able to recheck to confirm exact value agreed upon on a confirmation window as seen below. 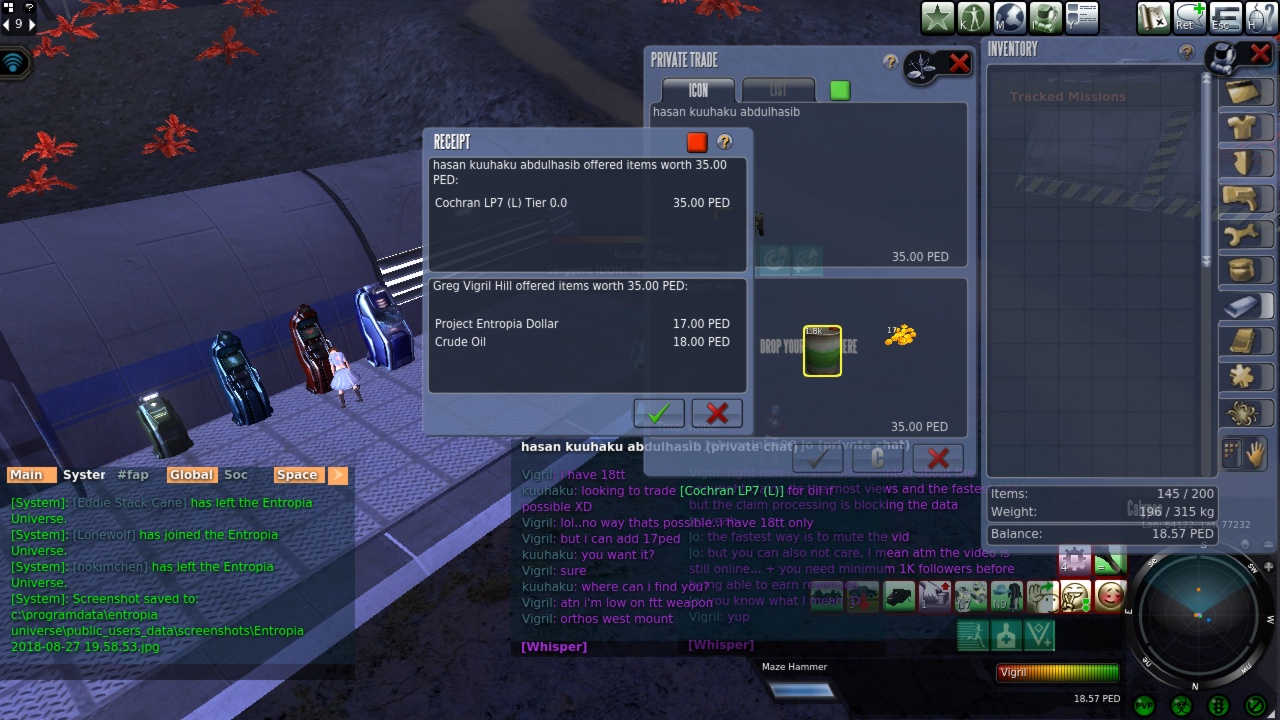 Like any other pay-to-win game, Entropia Universe have a unique system for players to choose to deposit their money into the game in form of Strong Boxes full of unknown resources such as ammo, pets, pills and Buff Ring. This resources gives player added advantage like the pills can be use as a limited time buff on hp, movement speed and even gun reload speed.

Another unique feature about this game is that every account only allows one avatar and having more than one avatar can and will be banned by MindArk indefinitely. This measure is to deter players from cheating, scamming and stealing from other players, which could negatively influence the game economy and its players due to the real money involved.

This game seems easy right? You are very much wrong! And here's the catch. You can play it for free but there is no reward that give you money and the only way to earn them is to either sell all your looted items to the trade terminal for the item value or to other players with additional markup. There are some ways that can give you easy money but to do that you have to do mundane task. Sometimes, with abit of creativity, Non-Deposit players can create services for them to earn in-game money or PED.

The most important thing to remember is to have lots of patience. As mentioned in the short intro. Patience not only apply for waiting to get the best price in the auction but also to get customer for your services, trading items and even levelling.

Although the game does not boast hundreds of thousands or even millions of players, with this tight community of players, the game is still prospering and bustling with players socializing with each other. Even teaming up to hunt mobs is not a hassle unlike other games that needed you to wait for other players to accept your invite or shout out and in the end would be rejected because they are either too high level or too noob to team up.

This harmonious community of players and the matured operating system by itself would make you experience a community like no other game can give. So in the end, this game is free as long as you have the patience to play and understand the whole economy behind it.

Rate this article Entropia Universe Free to Play or Pay to Play?

this is a good atical so keep up the good work

where do i find my levels?