The group stage of the DreamHack Winter Tournament in Sweden was completed, with Gambit, Na 'VI, EnVyUs and Mousesports fighting in the main 50,000-dollar prize. 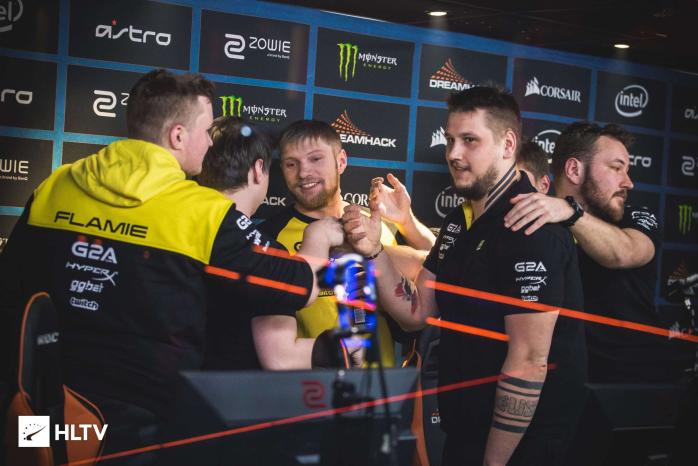 The first day of the tournament in Joncoping was filled with interesting bo1 matches, and one of the most anticipated encounters of the tournament - Na 'Vi vs. Gambit was certainly the most certain. The tournament was opened by A group, specifically Gambit and Rise Nation. Although the American opponents kept up to some extent, the current Major Champion came out victorious on Mirage 16-10 as the winner. After them, Mousesports and the North's academic team met. As expected, North Academy did not have any chance against the ropes and team, who had 26 assassinations at Cobbleston. Immediately after this match, a clash occurred on Overpass between Na 'Vi and Heroic teams. The Danish team managed to create a minimum advantage of 8-7 at the end of the first half, but the experienced CIS team collected, returned to the match and won the match 16-11. The next match was the match of the B group, meeting on the Cache between the French team EnVyUs and the German BIG, which includes our LEGION. This was the first match of the tournament that went into extra time because both teams were very good on the CT side and most of the rounds they took were on that side. In the extra time, however, EnVyUs was better from 19-17.

In the B match-match matches, Mouz and Envy met Traino. Envy easily took 13-2 on the T side, which is very strange for the Train. Mousesports tried to get back, they won ten rounds in the next part of the match, but the advantage was unattainable and Scream and the team were the winners of the B group and the first team to qualify for the playoffs. The last match of the first day was also the most interesting - the match between Gambit and Na'Vi. Inferno started relatively normally, Na'Vi won ten rounds in the first half of the CT, and it seemed that the match would be tight. Gambit responded with his ten goals in the second half, and we had the opportunity to watch one more extra time. Not only did we get extras, but we got roughly 30 rounds of action. No team ever closes the match, as soon as Gambit has a match ball, there is S1mple to stop them and secure new extras, so everything went in circle until Gambit decided to stop this long match and finish Inferno 31-28. The current Major Champions, after heavy troubles, were successfully placed in the further part of the competition as A winners, while defeated Na'Vi will have to fight in the next round.
On the second day of the tournament, there were only 3 bouts. The first two were for survival in the tournament, while the next two were for the passage. In the first encounter, we were released from the American team Rise Nation after losing from Heroica 0: 2 (Inferno 14-16 and Nuke 5-16). North Academy was beaten by German BIG, but failed to surprise and defeat opponents, 2-1 for BIG (16-6 Train, 8-16 Cache, 16-7 Overpass). Na'Vi was immediately followed by Heroic to solve the question of who, from Group A, will go into the further phase of the tournament. On Infern, Na'Vi, without any distress, destroyed Heroic 16-5. But immediately the Danish team responded by winning the Overpass 16-8. The decisive map was Train, s1mple entered the crazy mode and was unstoppable. Although he did not reach the 30 murders on this map, he helped Na'Vi win the Train 16-12 and secured a place in the DreamHack Winter.

The last match of the group stage was between Mousesport and BIG. The first map of the 3 matches was overpass, Mouz started on the T side and won eleven rounds, which was definitely enough to finally close this map 16-9. The next map was Mirage, on which the German BIG definitely did not manage. On the T-side they managed to win only one round, which was definitely used by Mouz and ended the match with a 16-3 win.