What is JRPG? It is the Japanese version of western role-playing games. Two major differences from their western rivals appear in them: cute anime style visuals and turn-based battle system.

Developed by A-Lim and released by Gumi back in 2013, Brave Frontier is a free-to-play JRPG, with in-app purchases. This title brings nostalgic feeling in me for a long gone times, when I was young and spent many hours playing JRPGs on my old SNES console. Memories about games like Final Fantasy VI, Chrono Trigger pop in my head. Considering that, the gap between Chrono Trigger and Brave Frontier releases is nearly 18 years, I have felt deep satisfaction to see this genre is being revived on android system. 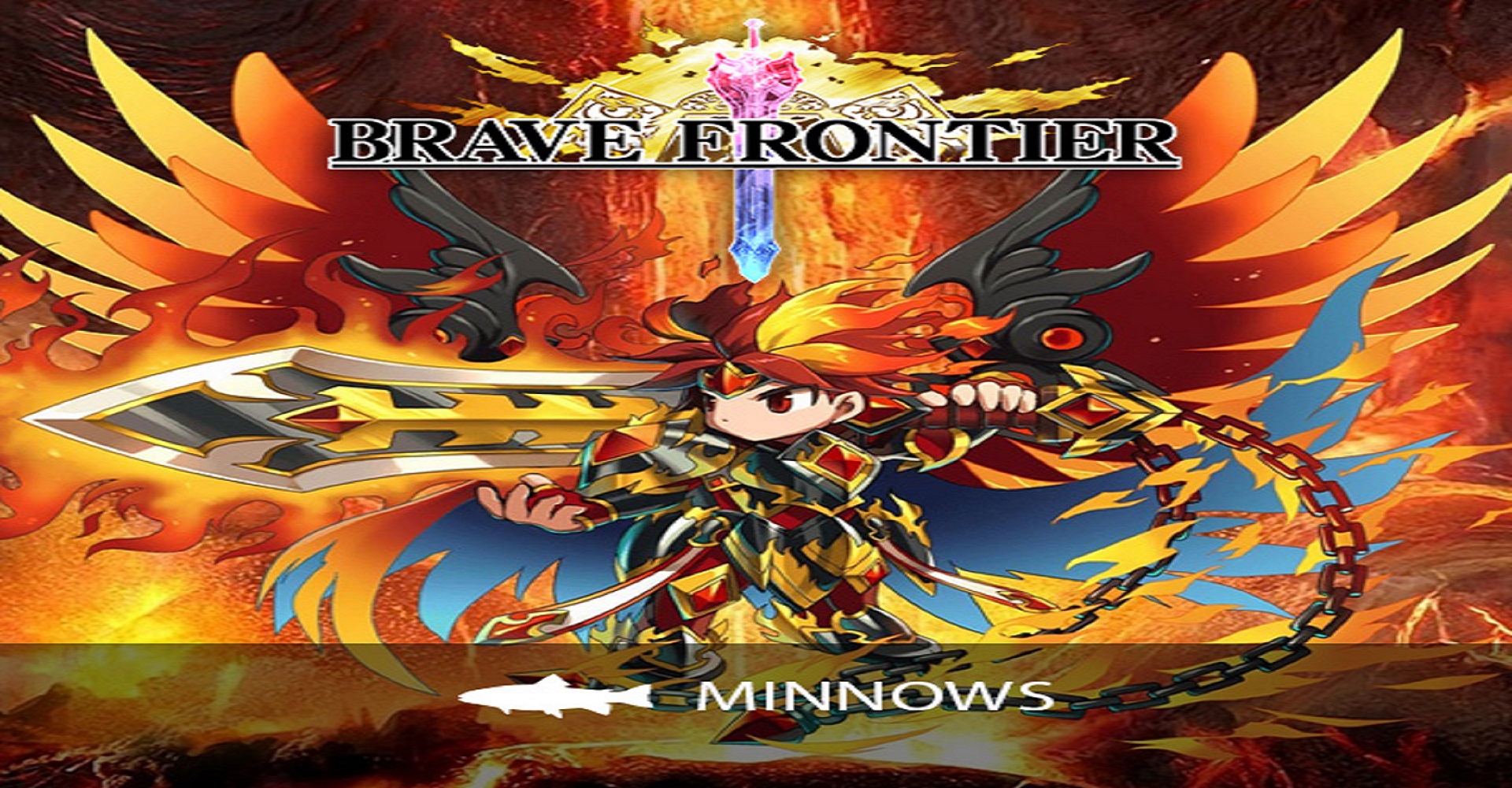 The story takes us to the world of Grand Gaia. Some wicked fallen gods appeared, caused ruckus and made work for us, the summoners. Taking this role, the players will have to summon heroes and creatures, build strong team and fight the evil. 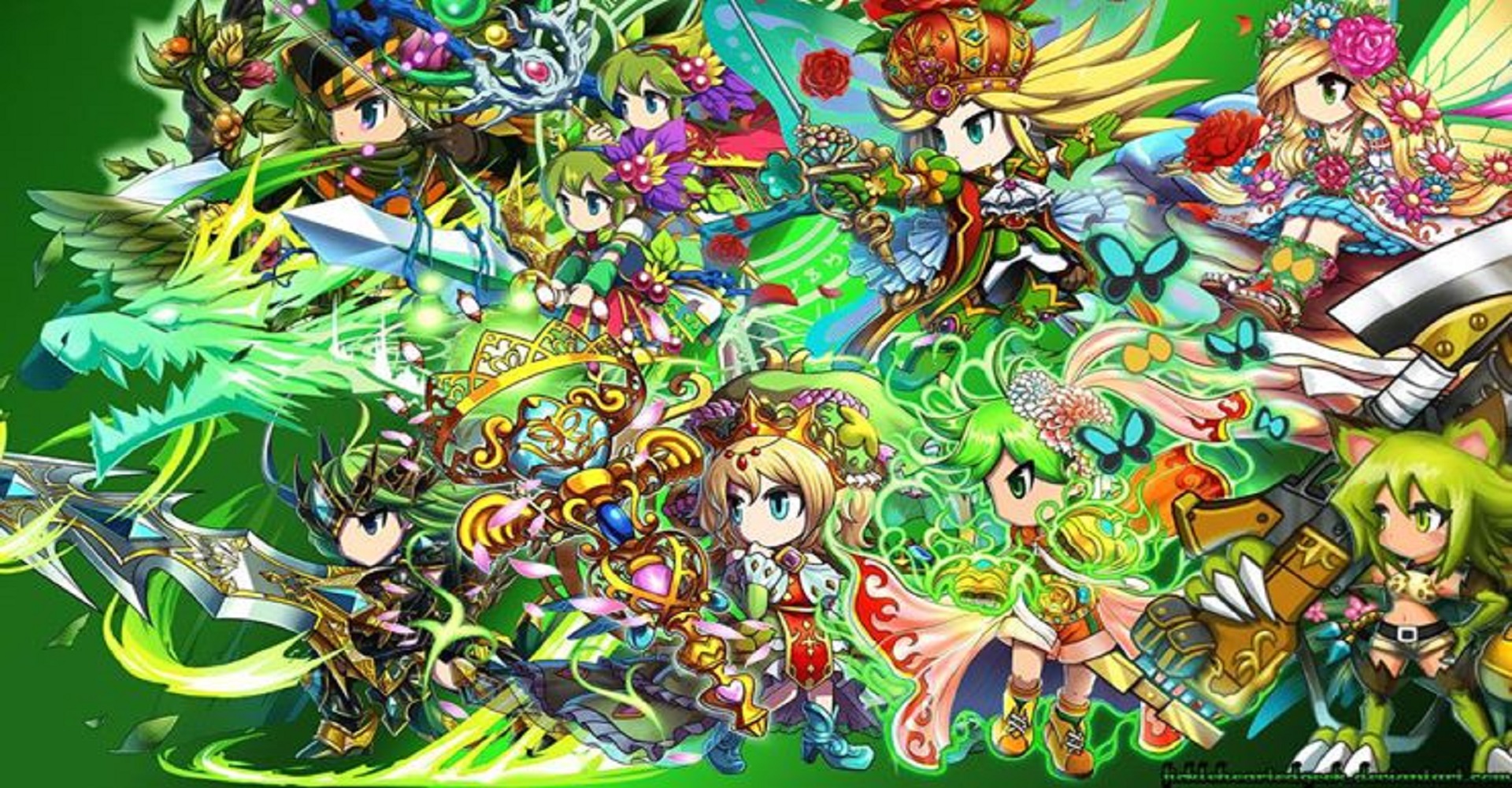 Turn based combat system, similar to the JRPG titles from the 90's but with improved and more detailed 2D graphics. Options to autoplay and speed up the combat are available.
Your party consists up to 5 heroes, one of them assigned for a leader. Make good decision for this position since you will want his leader's skill to affect every rest member of your party.

The team has total cost, which limits the strength of the heroes you add. Don't expect to make a party of 5 high rank characters at the beginning since this cost raises slowly with leveling your account level. The cap of the account level is very high, I am around 250 and it is still going up. So yes, the gameplay requires farming and grinding.

The game itself isn't very hard. Whenever your party dies you can always spend game currency and revive them against already weakened enemies. If you think its worth of course. If it isn't, you only lose gained items during the run of the stage.

Progressing through the different stages requires adding different players in our friend list. Then using your friend hero as a mercenary on quest stages, you will receive his leader skill as a boost upon your party members. 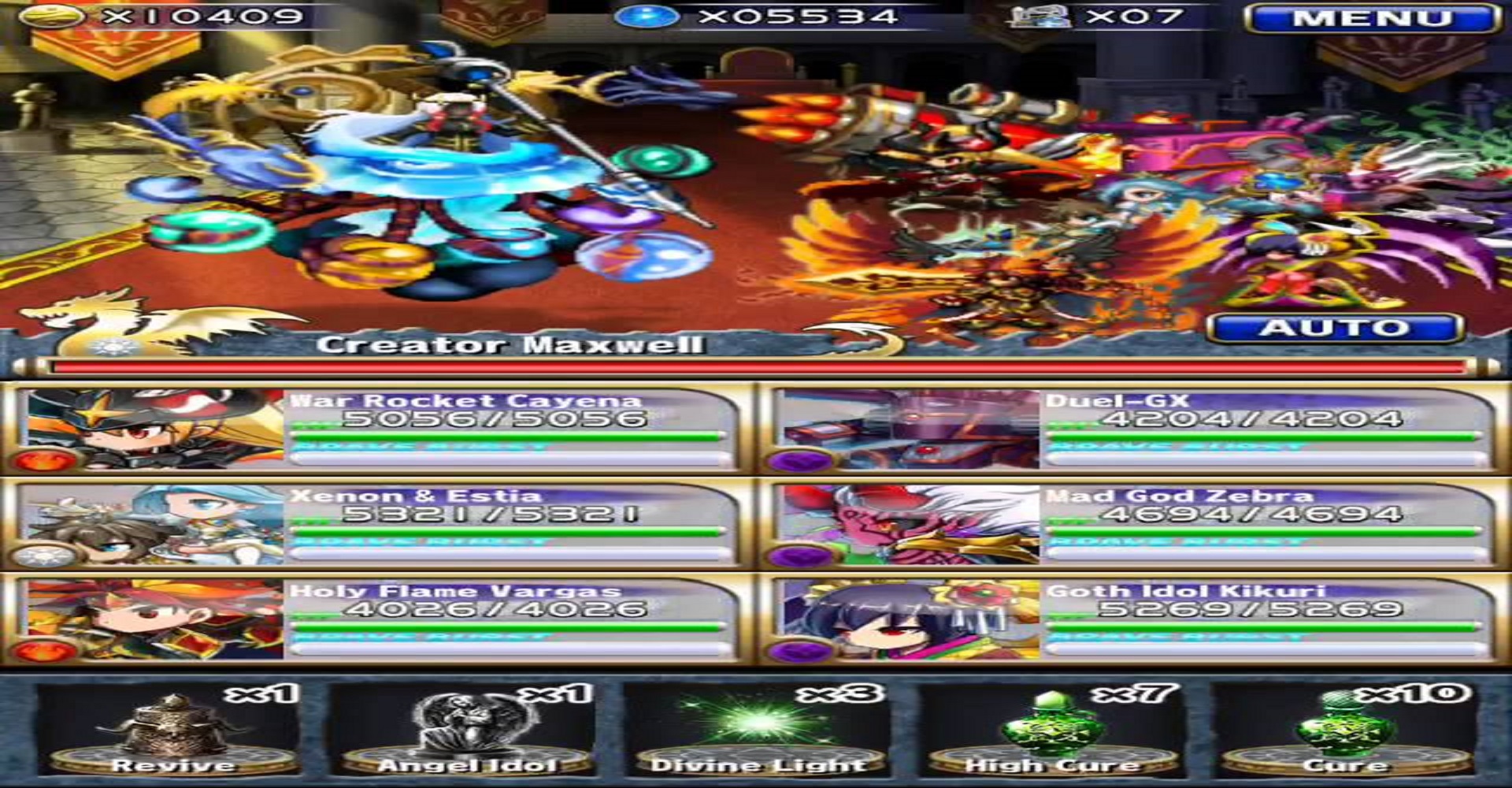 You can obtain characters through a gacha. Using this system requires either friend points(these you make when you take other player mercenary for running stages) or the game currency - gems (for the high rank heroes)

Each hero has rarity. 1 star is the common and 7 is the real deal, especially when some can be evolved only to 6 stars. Higher rarity also gives the unit higher cost value. Around account level of 120 or so, I was finally able to make full team of 7 stars heroes.

Units also hold element affinity. It can be Fire, Water, Earth, Thunder, Light or Darkness. Players that are familiar with JRPG titles probably know how it works. For beginners I will give an example:
Attacks from fire based hero does more damage to earth element and takes more from water one.

Heroes attacks during battle fill their brave burst gauge, which is their most powerful skill. They also have passive skill and classes.

The unit's class is being randomized between: Lord, Breaker, Oracle, Guardian or Anima. It caps the maximum values of the hero's basic stats: Attack, Defense, Recovery, Health Points. If you decide to try this game, search for one of the many wiki databases and find which class gives your current hero highest stat caps.

The Hero's database is huge and with that I mean really HUGE. From honorable knights, angels, warriors to fallen to dark arts mages, vampires and many others. Each with his own story.
You can add to your squad Vocaloid's mascot - Hatsune Miku, characters from Final Fantasy, Guilty Gear, King of Fighter, other Gumi's titles such as Crystal of ReUnion or The Alchemist Code, or even from anime titles like My Hero Academia. 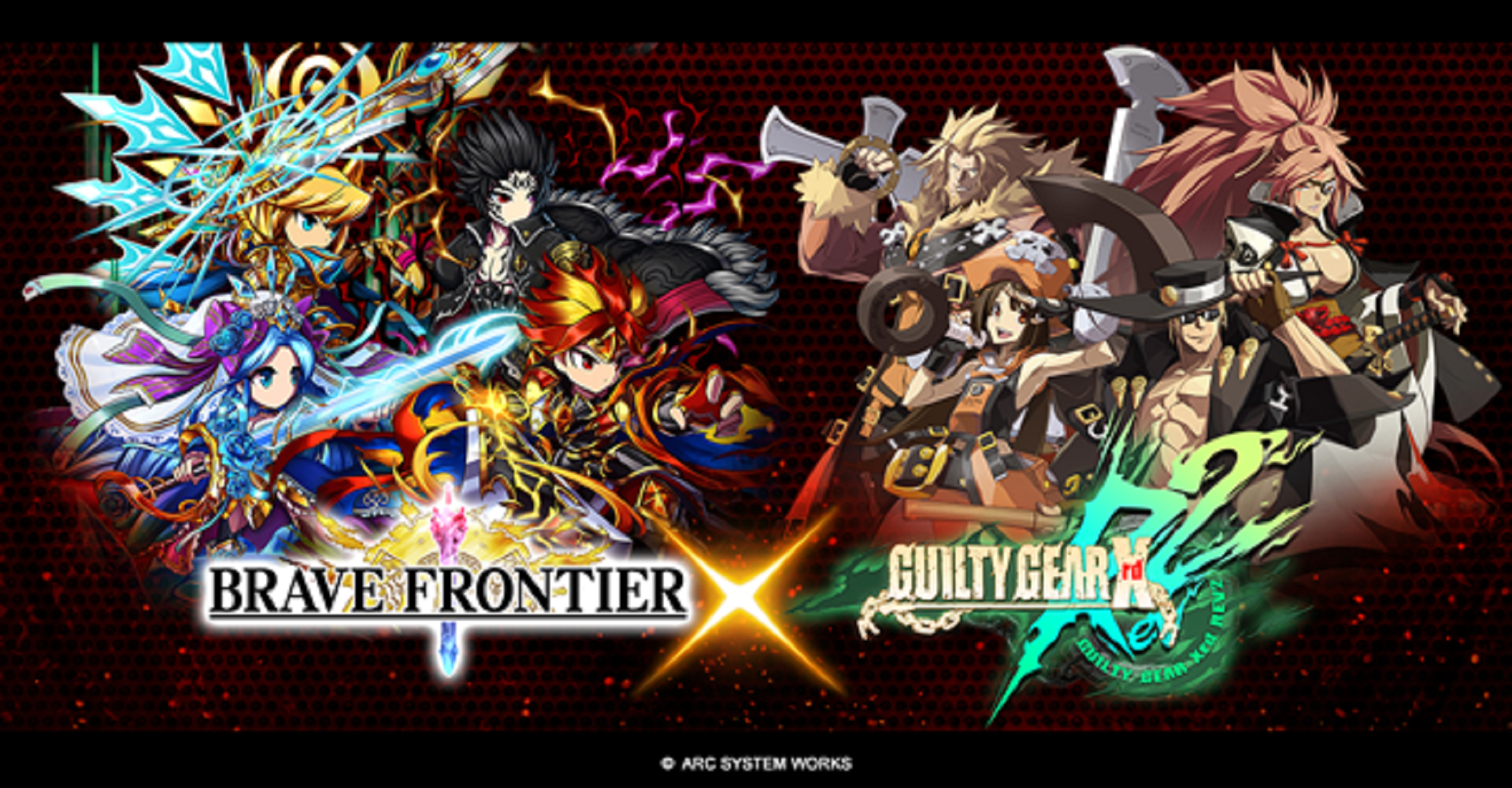 Leveling your units is a must, in order for them to become strong and evolve. For that you will have to farm different kind of imps and frogs - from Mystery Frog (distant relative of The Muppet's Show, Kermit) to a blue Sphere Frog.

Gear is also important. Weapons and Armors here are called spheres. You can wield maximum of 2, as for the second one's slot you will need the mentioned above Sphere Frog.

This game offers crafting system, which is available through the town tab on the main screen. You can craft there either spheres or consumable items, that you can use during your quests. This requires gathering amount of proper materials and leveling the buildings that the Town tab holds. 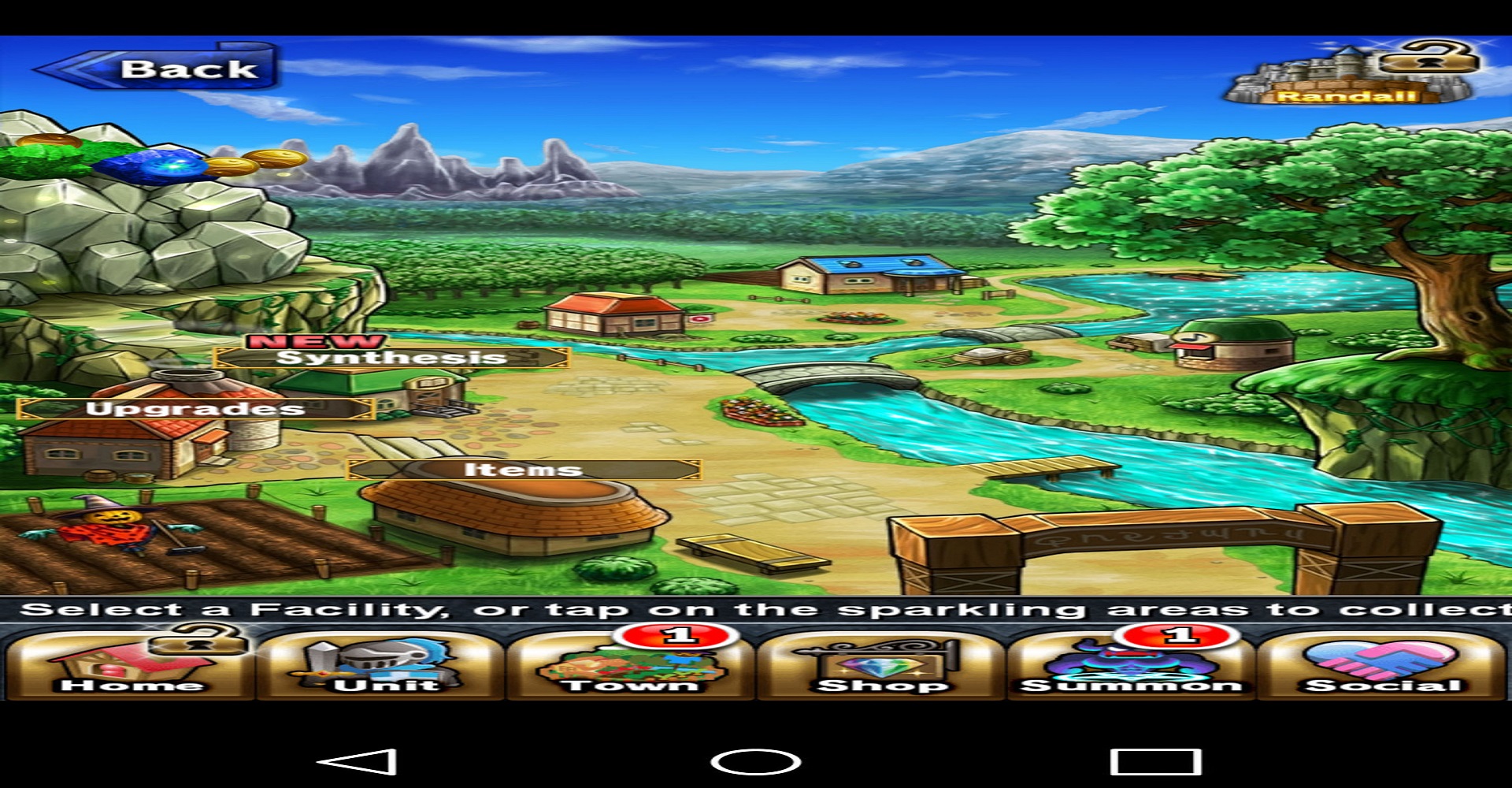 PvE and Multiplayer (based on the global version)

The Multiplayer also gives choices of either co-operating with other players in Raid Quests or fighting PVP at Arena, Vortex Arena or Colosseum.

In the Raid Quests you team with other players and do a stage that has specific task to be done and different difficulty level. Some valuable crafting materials are gathered here as rewards.

The Arena offers a rank system and the top rank needs many battles. Progressing through the ranks of it gives you certain rewards. The Battles there are not in real time.

Coliseum is divided by different star rank of your party members and the points gained are ranked on seasons. It has valuable exchange tab and the combats there are real time.

The Vortex Arena is an event which you will you need to challenge the arena using a squad of a specified element, which explains why it is also called Elemental Arena. Victory gives you points to attain a rank in it. There is daily and end season ranks, giving fitting rewards.

The Japanese version of the game has guild system, which brings more multiplayer fun doing guild raids. Sadly this feature is still not added in the Global Version of Brave Frontier. 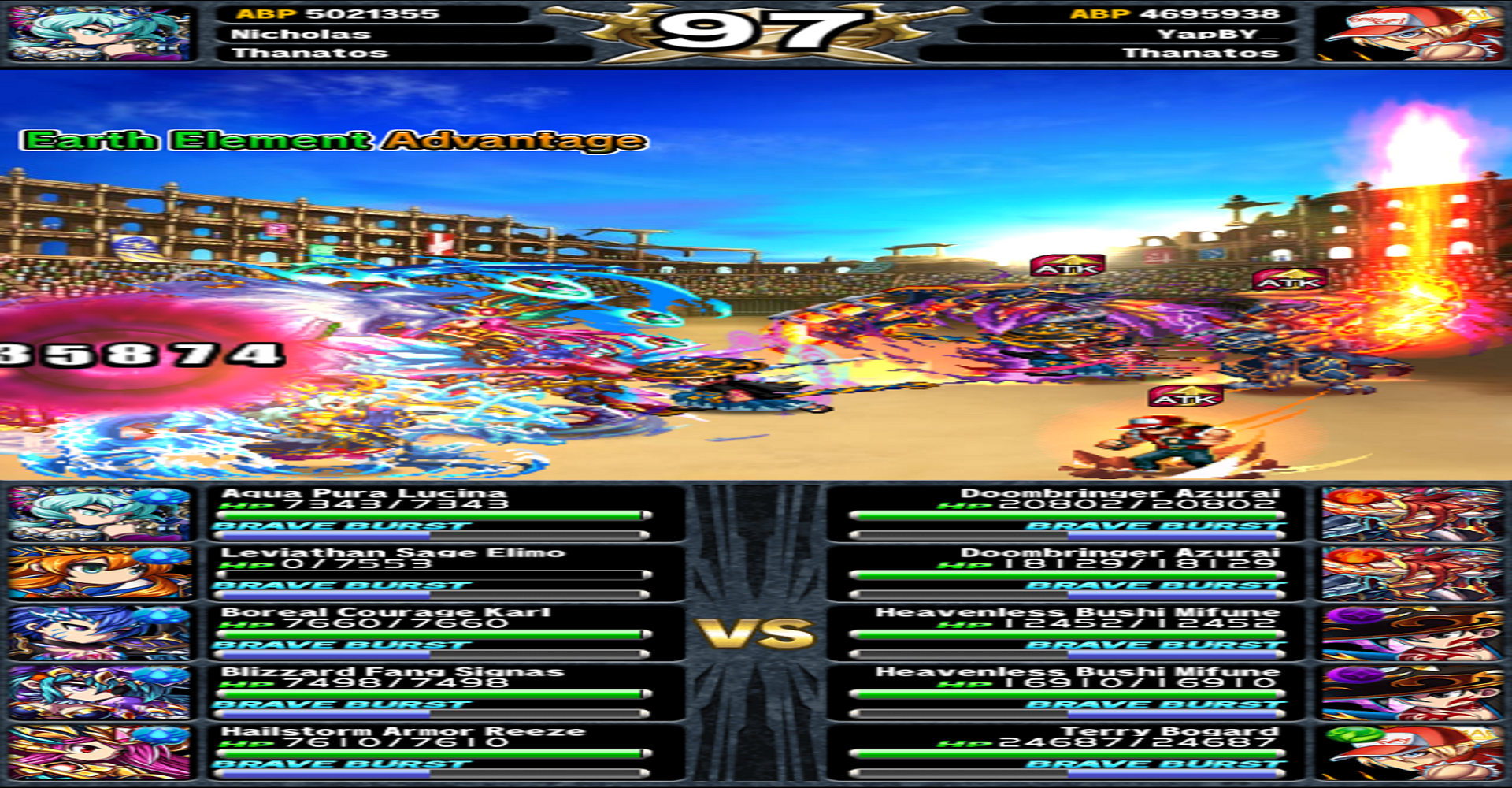 For progressing to the end game PVE stages, you actually don't need to spend a single coin on this game. Advancing through the story quest or clearing special and event stages for first time, or by logging everyday. There is no difference between the in-game earned gems and the ones you buy with real money. That is quite nice.
However for PVP modes such as Colliseum and Vortex Arena you will need tons of gems spent on the evil RNG(random number generator) that stays behing the Gacha system.

(screenshot taken from an anime, explaining best about RNG) 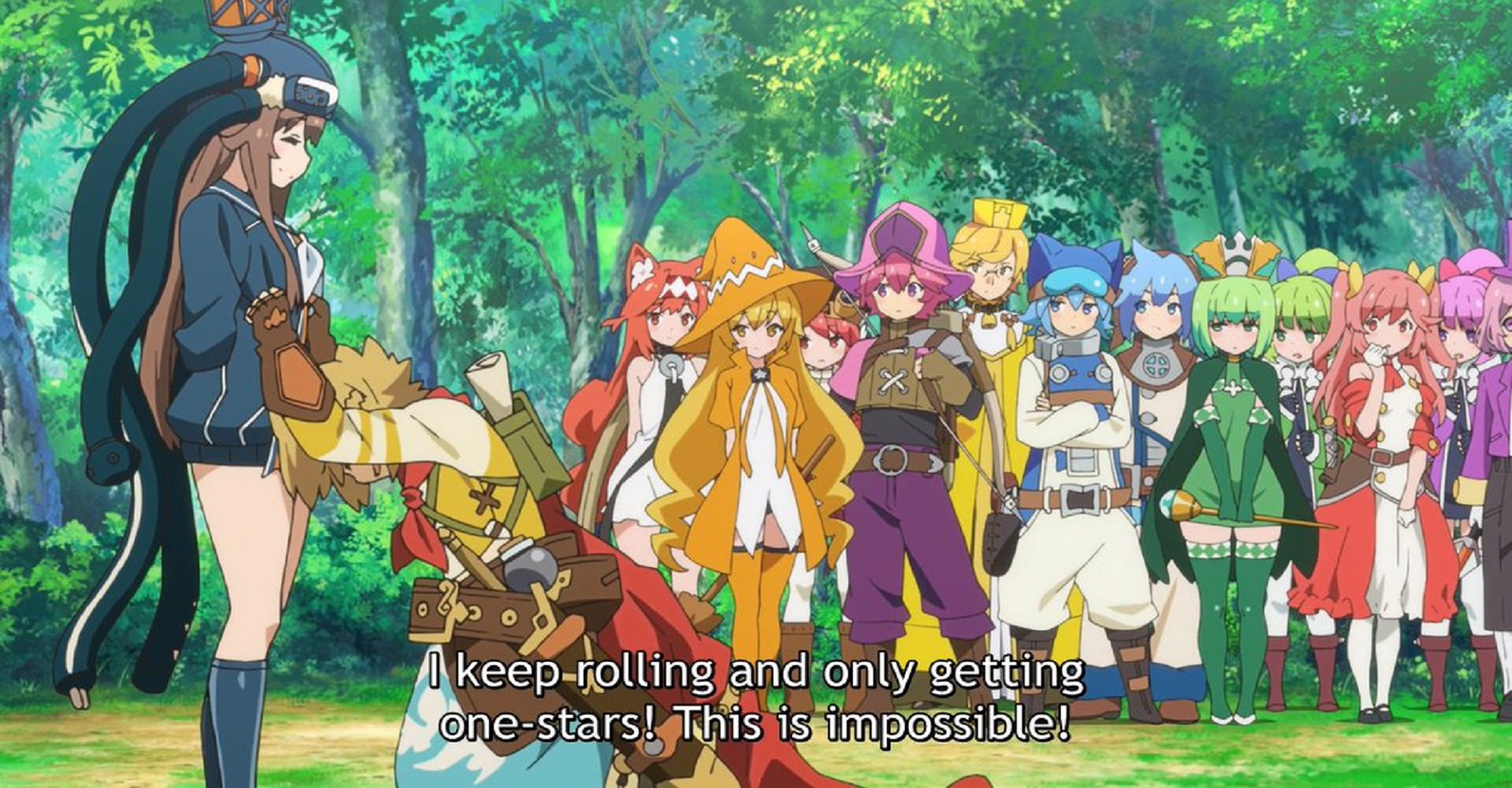 Characters design art is well made. Cutscene's graphics can be improved because they look to me as something little better than a fan art. As for the battle graphics I can define them as a more detailed retro JRPG standarts.

The music is composed by Hikoshi Hashimoto, who worked on many Sega titles.
The tracks are mainly synthesized and pretty average BGM. In the town tab there is building similar to a jukebox where we can actually listen the whole OST.

For conclusion I will say that Brave Frontier is a really impressive game and if you are fan of games like Valkyrie Profile, Final Fantasy VI, Chrono Trigger.

The global release got its 5th Anniversary earlier this year. Seeing Gumi still update this title, make collaborations or bring new events, I am very interested to see how further Brave Frontier will develop.
As far as I know, sequel of the game was already released in Japan some months ago. We have to wait and see if Gumi is planning to launch it worldwide. For the global's market franchise, they gave a spin off game called Brave Frontier: The Last Summoner. Giving it a try I can state that it is still far behind the original.

Pictures are junky every thing else is okay