What kind of game is the word here?
Beat Saber is a rhythmic game for Steam VR and PlayStation VR, with two lightsabares following the rhythm so that the dice from the first person precisely cuts the dice that comes to you. The PS VR version currently consists of twenty electronic tracks, a 50-challenge campaign and a party-style game with 10 alternate players, while the PC version is still in Early Access. PC version has the ability to add your own music, but both versions of the game will cost you the same - 20€

This game is simply a rhythmic title for samurai.

More precisely, the rhythmic title for samurai in the visual style of the Tron series movie. Created exclusively for VR, some time at Early Access's offer at Steam, but since recently officially released for PS VR, Beat Saber is a music game where you can glitter shadows and chop cubes that approach you in the rhythm of music. Turn blue cubes with your left hand and red right. And that's basically it. Conceptually very easy and understandable, but performed very fun. 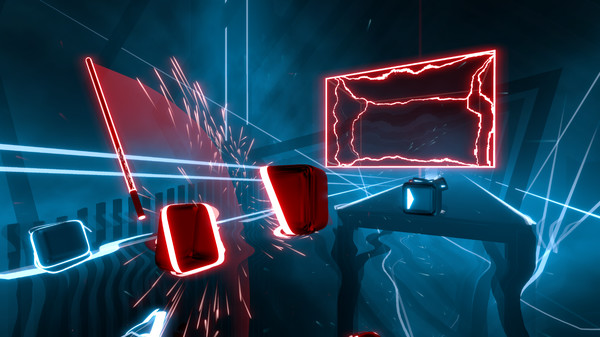 The music that follows the game does not go far from Tron so do not expect a Taylor Swift. It's a mix of electronic sound from trance, dubstep and synthwave genres, or whatever it's classified today. Music itself is not really something I can describe. But I like it, really. Sooner or later, end the song while you're making crazy moves. And then very little space remains for any objection.

Beat Saber's challenges are so complex that you do not skip your hands as a monkey. Each upcoming note, or cube, has a certain edge that indicates which sides to cascade. Although all this starts relatively simply, you can safely expect various complications. Cubes thus start to arrive in some less logical sequences, and by that, the player is looking for good coordination. Precision also becomes a desirable skill because cutting through the perfect environment carries more points. 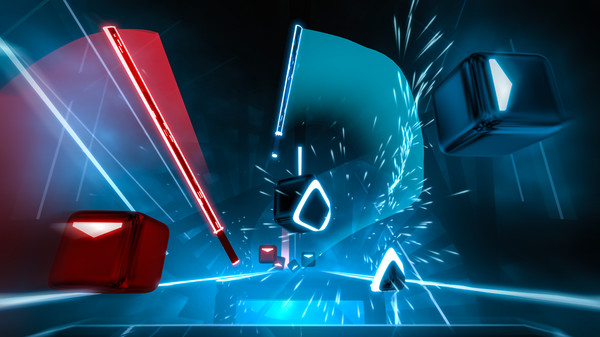 The scoring system is the only thing I can not figure out. Every few parties have decided that something in my approach needs to be changed because I can not manage to achieve the required results, whether I go away a little, stand up or just jump over. That is why it turns out to me that every level is repeated ten times. Yet where such a thing as frustrating in other games, the Beat Saber is quite the opposite. With pleasure, I repeated every challenge, whatever the results were, just because Beat Saber's play was very interesting.

Beat Saber is a physically demanding game, so it's not bad to be warming up first.

Playing can also be physically demanding. Apart from giving you a warning when starting, the game also suggests that you first stretch your muscles. If you're not smart with both hands, the PS4 version also includes the ability to play with one Move controller. However, this does not mean that you will be able to pass the game completely if you own only one "magic wand". The whole mode is limited to just a few songs, all of which are arranged at expert level until a tutorial can be started without two controllers. 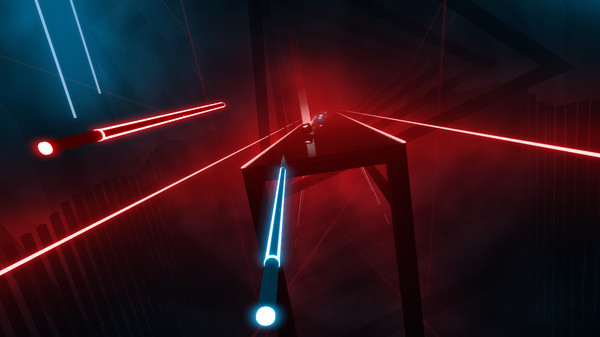 At the moment, there are only 20 songs. Although it may sound a bit, it's not really because they are accompanied by various modifiers. They can accelerate or slow them down, which makes things sound a bit different, and they will keep the 50-odd campaigns alert to you until you master them. There are also mines that can not be touched, and walls that force you to lean or bend in a virtual space.

But why is all this so good? In addition to the striking sound, the secret of Beat Saber's success can be linked to vibrations in controllers, which is why you have the feeling that you are making contact with cut craps. Thus, the whole virtuality of these things becomes a tangible reality. The direct multiplayer is unfortunately not, but party mode will allow you to compare up to ten players in turn while your team rest. I mean, who does not like music yet? So there are few reasons why Beat Saber could not be found in the library of any VR device owner.

I really wanna try this game out but I don't have a VR headset.

Famous game, I have seen alot of memes with it :d

did not have much faith when it comes to virtual reality, but this game made me change all those opinions and buy me a virtual reality device, just to be able to enjoy this entertaining game.

the songs are too good to enjoy while playing epic

This is the best VR game and nice job