Warhammer 40,000: Dawn of War was popular at the very beginning. But things got really going in 2006, when Relic entertainment released the third title of the series: Dawn of War: Dark Crusade. For the game in question allowed players to write their own story any way they wanted thanks to the game's nonlinear progress.


Kronus is a planet located in the Ultima Segmentum, in the eastern region of the galaxy. The world has switched owners from Imperium of Man to the Tau Empire, but things have been mostly peaceful for the planet. But sparks begin to fly when an archaeological team digs too deep and discovers a massive network of catacombs, awakening the Necrons within in the process. The ancient machines then set out on a genocidal campaign to cleanse the planet of all life. The rise of the Necrons doesn't go unnoticed by their ancient foes, the Eldar. Responding to the threat, Farseer Taldeer leads a strike force of craftworld Ulthwé* to Kronus to stop their advance. This in turn leads to the Imperial Guard arriving to the planet under the leadership of Governor-Militant Lukas Alexander, who is hunting Taldeer after her actions caused a massive disaster to Cadian 412th regiment on Lorn V. Discovering the planet filled with powerful weapons and relics from the ancient times, Alexander receives new orders from the high command to secure the entire world for the Imperium. Warlord Gorgutz 'Ead 'Unter is also back after being driven from Lorn V. He arrives to the planet with a warband of Orks and bolsters his forces with the feral Orks infesting the jungles of Kronus, amassing a massive horde for a planetwide WAAAGH! During the Horus Heresy in the ancient times, Kronus was a battlefield for Space Marines, loyal and traitorous alike. They too left powerful relics and artefacts behind, making the planet quite valuable for both sides. Brother-Captain Davian Thule leads three companies of the Blood Ravens chapter to secure the planet for the Imperium and to protect the chapter's holy relics, while Eliphas the Inheritor, a black apostle of the heretical Word Bearers legion, seeks to gain favor of the dark gods by proving superiority of Chaos over all others. Faced with threats from all sides, the ruling Ethereal requests for aid from the Tau Empire. Commander Shas O'Kais** answers the call, along with a strike force of Tau and their allies to ensure their hold over the planet. The stage is set for one war of a massive scale. Unfortunately, the bureaucracy of the Imperium and conflicting orders of captain Thule and governor Alexander lead to the two Imperial factions battling each other along with all other enemies. Who will rule Kronus?

** It's widely believed that Shas O'Kais is the soldier La'Kais from the first-person shooter Fire Warrior. Both share the name and the homeworld. Though there is chronological conflict due to the novels. 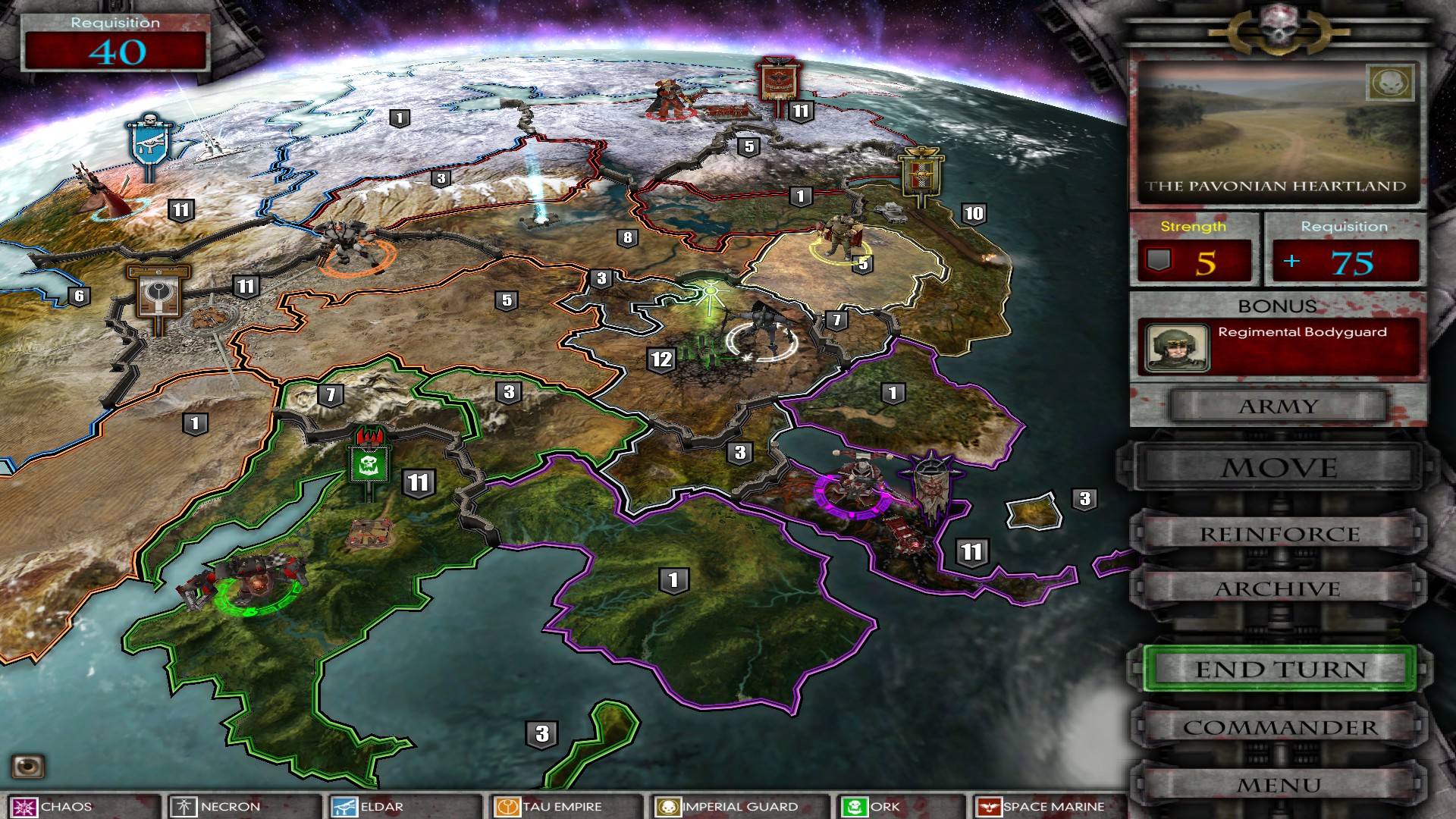 In a clear contrast to the earlier games, Dark Crusade features a strategic campaign map. The player can play as whichever faction he chooses and conquer the regions in whichever order he wants. The battles are fought as real-time battles. Conquering provinces gives various bonuses, such as units that can be recruited to serve as honor guards for the commander, or special bonuses, such as ability to move to any region on the campaign map, if the player controls the space port in Pavonis. The main goal of the campaign is to defeat the six other factions by conquering their strongholds, all of which are unique in their own way, and heavily defended. One of the most memorable things of the game is the over-the-top banter between opposing commanders trying to roast each other during every stronghold mission. Basically everything coming out of Gorgutz's mouth is pure gold. Or the following gem, if you're invading the Space Marine stronghold as the Tau and capture the relic on the map:


Thule: You will not squelch our faith so easily, alien.

O'Kais: The Tau Empire will respect your faith, human. If you would only see reason.

Thule: Our faith is in the Emperor of Man, alien. To bow to you is heresy.

O'Kais: So says the slave to the free man. 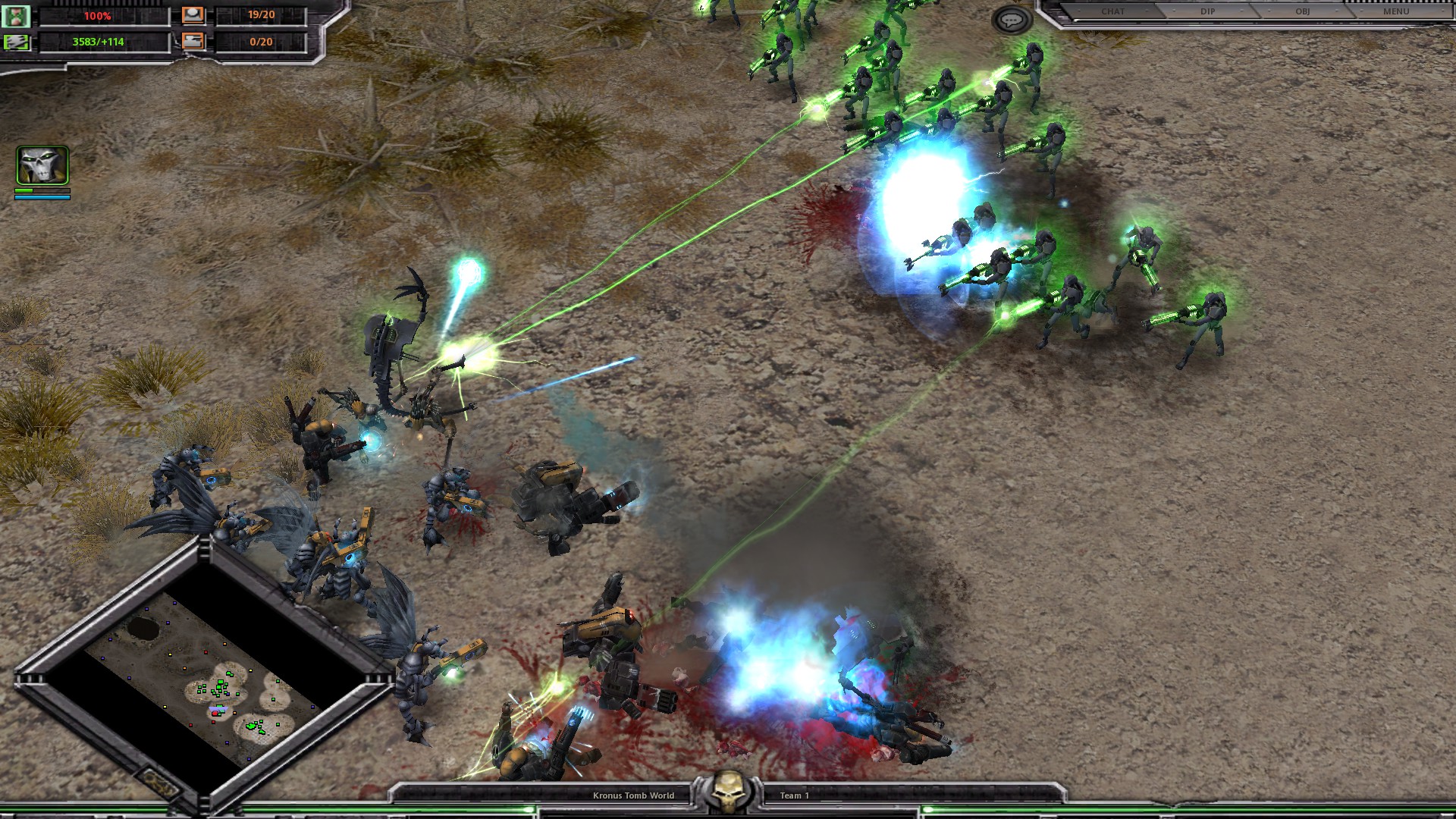 The game gives new units to all existing factions, like Flash Gitz for the Orks or Harlequins for the Eldar. The newest thing, however, is the introduction of Tau Empire and Necrons as playable factions.


The Tau Empire relies a lot on firepower and the main Tau infantry unit, fire warriors, has both high damage and a long range. The Kroot and the Vespid who have allied with the Tau support the faction with melee units. While playing as the Tau, the player must choose whether he'll build a Mont'Ka command post to unlock additional battlesuit and gunship units for even more firepower, or a Kayon command post, which unlocks the Kroot Hounds and Krootox, giving some more punch in close-quarters combat. The command post can't be changed once the choice has been made -even if the building is destroyed, it's only possible to build a new one of the same kind.


The Necrons are the only faction that doesn't use requisition as a resource. Instead, building obelisks on captured strategic points grants them a time bonus, which speeds up their construction, research and training. As they are deathless machines, some of the vanquished Necrons might reassemble themselves and rejoin the fray. This can also be exploited by upgrading the Necron Lord with the resurrection orb -using it correctly even makes it possible to exceed the squad cap. Also, only the builder units can capture strategic points. 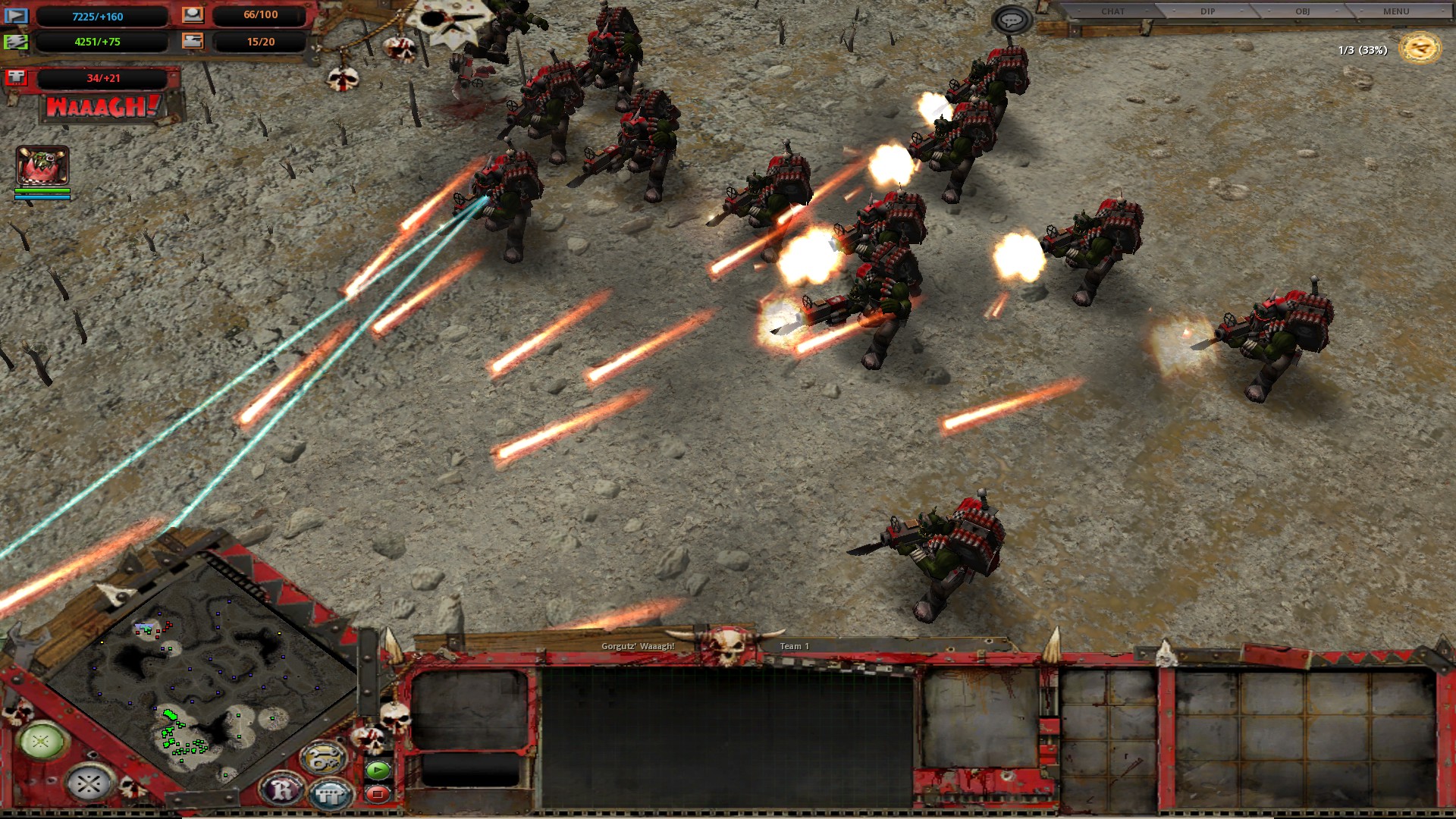 Dark Crusade is the first game in the series to feature nonlinear gameplay and a large campaign map. It features a unique story for each faction and the possibility to write one's own story. New units, action and good amounts of humor every once in a while. Widely considered to be the best game in the series, and can't really say I see any reason to dispute that.

2nd best in the series

reading this article made me want to play the game