This game is also available on Steam Client where it redirects to Ubisoft's Uplay for authentication and requires an Uplay account in order to play the game... Yes, this has a multiplayer kinda thingy but that isn't quite fun to play for long, I admit....

But by far the best game from Ubisoft that incudes best graphics and yet is pretty well optimized to run on medium to low end PCs with a potato graphics card... You can always lower the resolution to get playable frame rates, but if you have a good PC, then you'd have to consider bumping the graphics to the highest and you won't regret what I am talking about.

Read along to find out more about the 6th game in Assassin's Creed franchise from Ubisoft which is a super hit on all platforms where it was released, packed with an awesome story and super fun vaulting.....

This game is also known to as

wide spread by its pirates look and similar to the most renowned film series Captial Jack Sparrow, oh! The Pirates of the Caribbean series. Well, actually there was a game which was set to be developed by disney about pirates which is related to Pirates of the Caribbean and it was released on consoles, I played on PlayStation 2 but that's old one, now after the release of Assassin's Creed IV - Black Flag, that never came out....

Yes the ™ is used after Black Flag as this game is pretty obviously known to as the name Black Flag... So the game is a combination of

engine and mix bag from Ubisoft.... 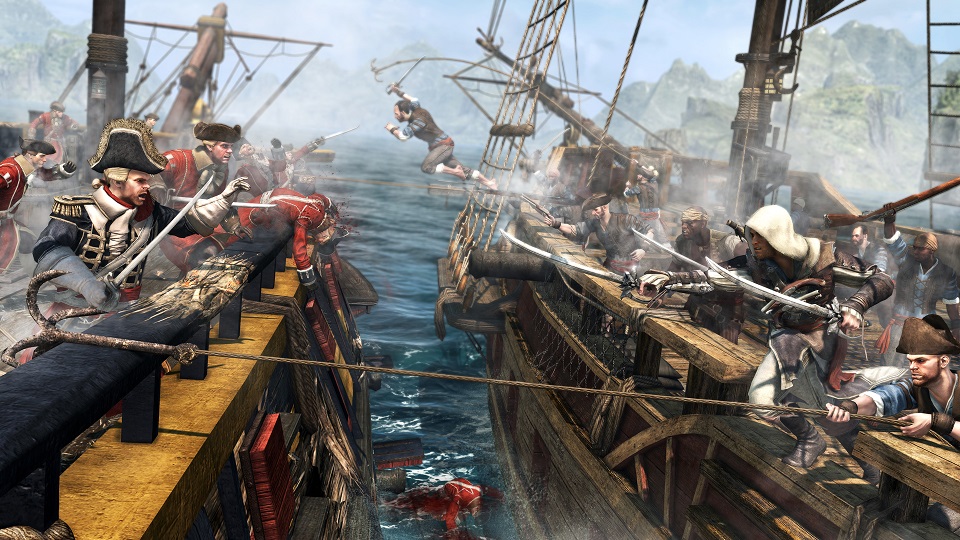 I admit, the cutscenes and cinematic trailers are a bit distracting than the original game itself but this didn't affect very much in case of this game, a little bit but the game is pretty similar and even better in some aspects of the trailer and the bandwagon of hype created by the game... at that time....

Some details from Steam about the game: 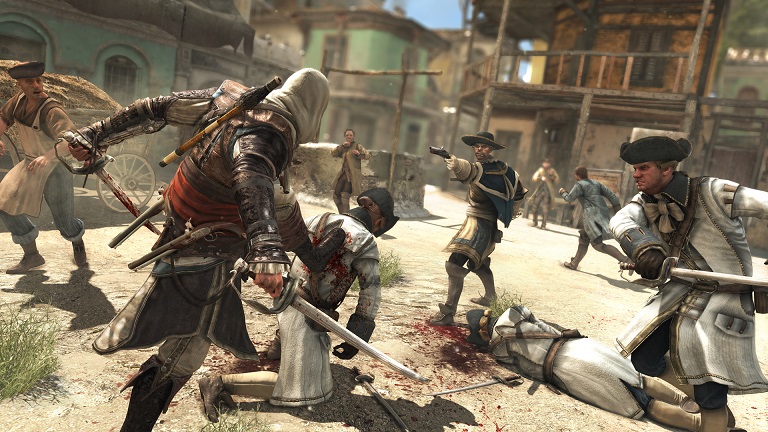 who is the grand father of Connor if you remember the series pretty well... and in this game he is controlled or played from Animus, and I'll say it, the part where you have to play animus thing is quite boring and takes some time to complete them, and they worst part is that you can't skip it. That's mandatory and the part of the story, but who cares the rest of the game is packed with awesome visuals and butt crunching graphics and weather in the game makes you fell awesome and charismatic, you'll know what I'm talking about in a minute.... 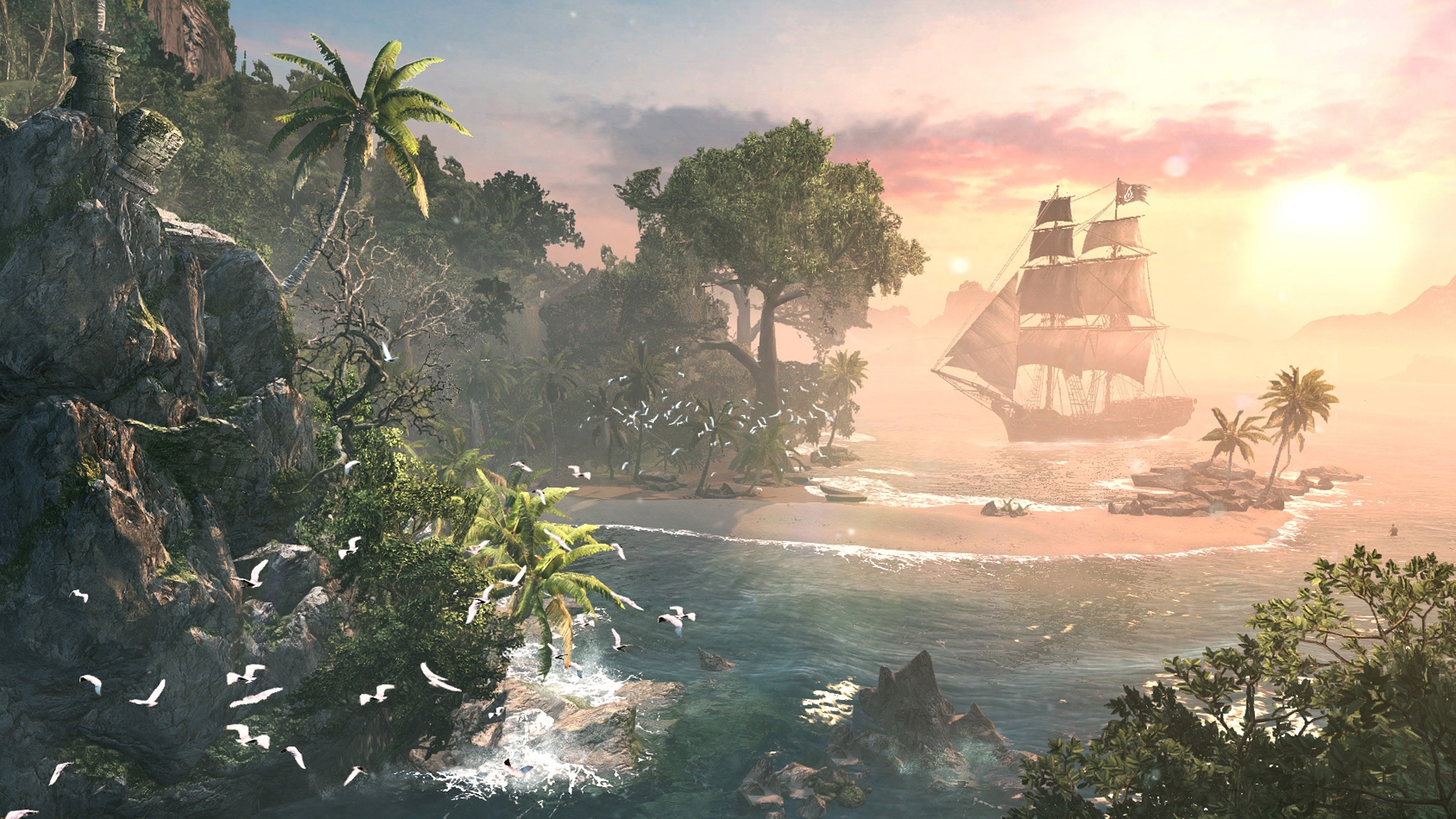 This and the next image are enough to tell that this is the in-game footage which looks absolutely crazy for a 2013 game the runs on meduim PCs and Laptops.... Here take a look at this too.... 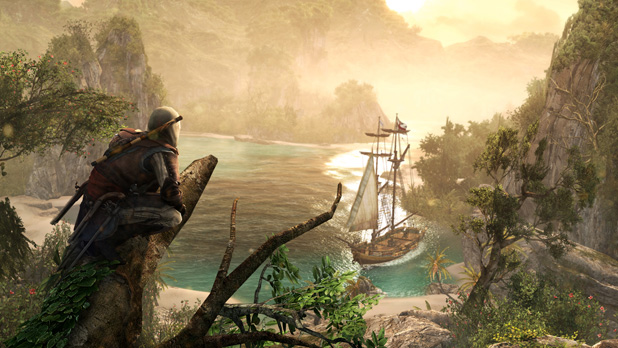 and view some of the things hidden in the map, and access those from the map itself, some what handy and looks awesome....

You can see how many times I'm using the word 'Awesome' as this game really deserves that word and the praise here.... Even after the release of the Assassin's Creed Syndicate this game has its share in the best game, Can't say after Origins release.... 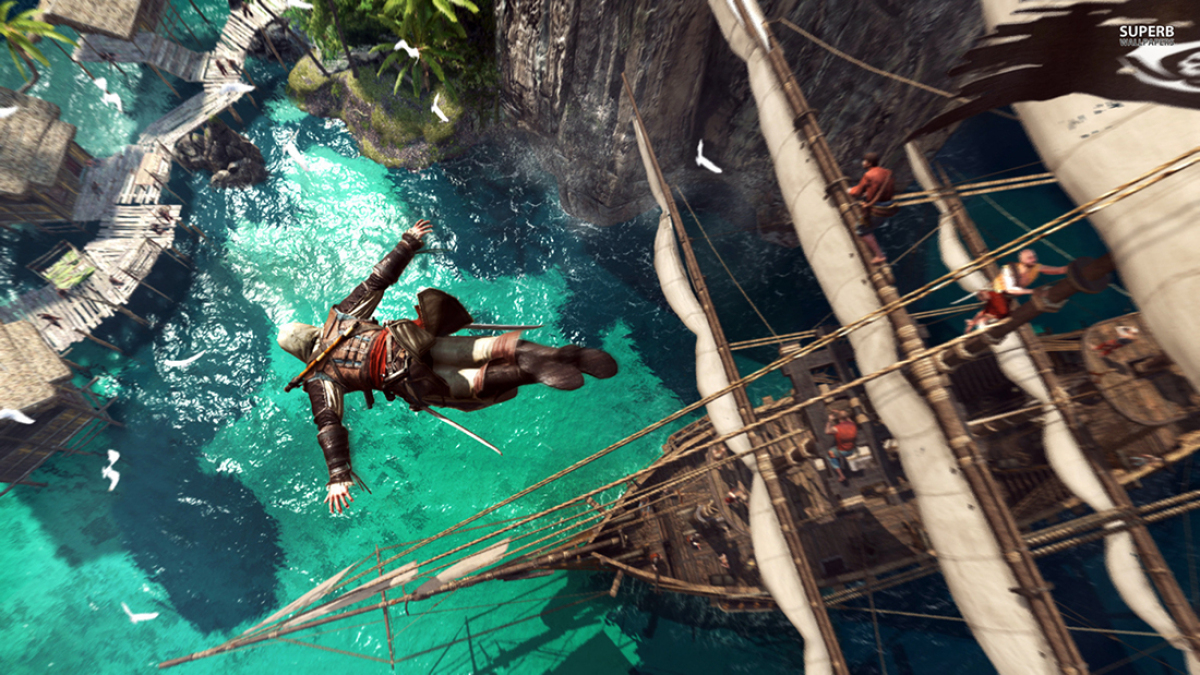 You can vault and do parkour jumping from roof tops and what ever the fuk you want, as Edward Kenway just walks up and climbs almost every thing in the game excluding some miniature things that no one cares.... And you can do a

, well its just a case where you jump off a top/highest tip of a building or ship or a castle and fall into a pit with leaves, hay or water and still survive with full health.... This is the characteristic feature of the game, you can see the above image where you can see him doing that from the top  of his Ship.... 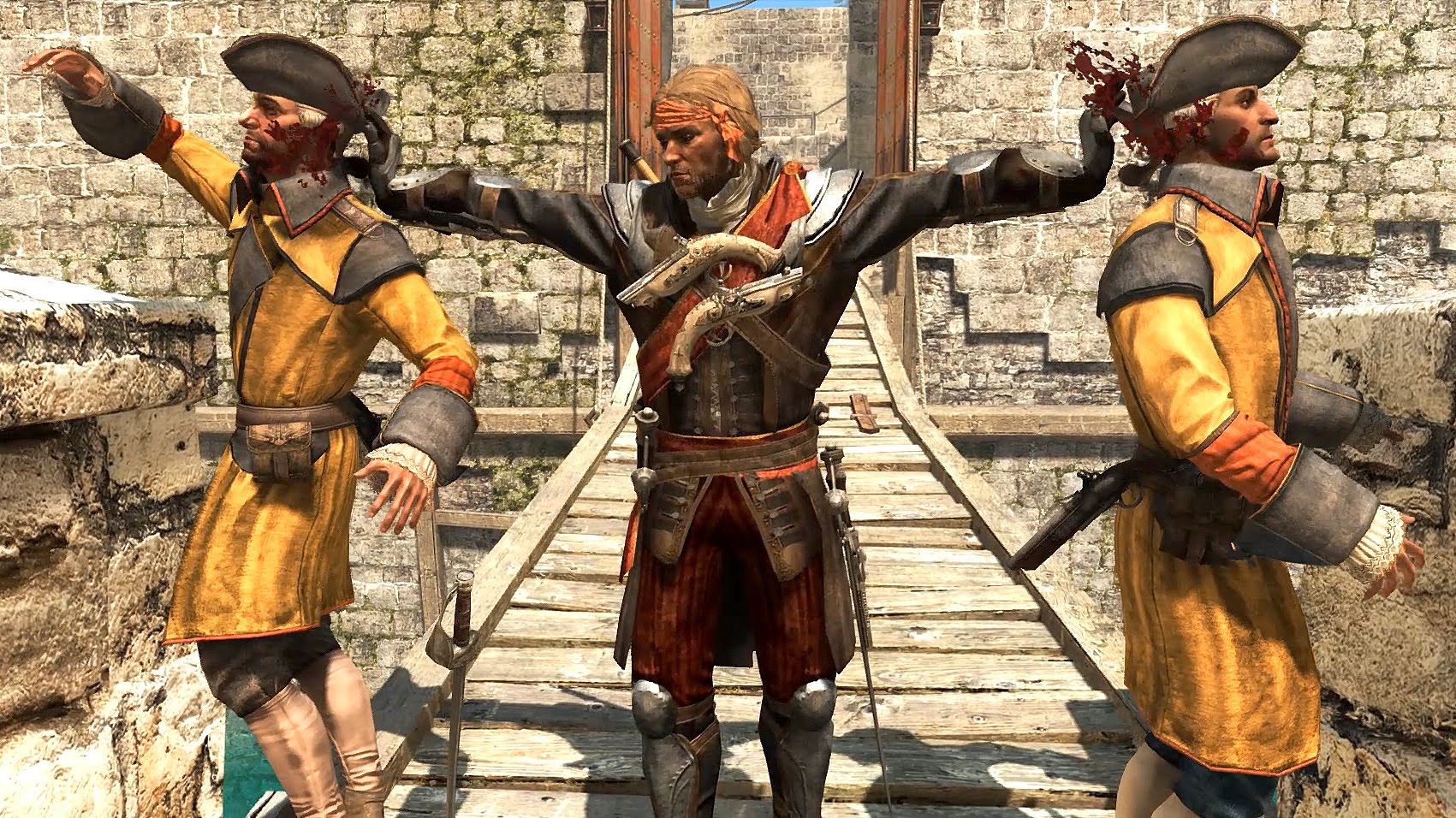 I didn't mention about the 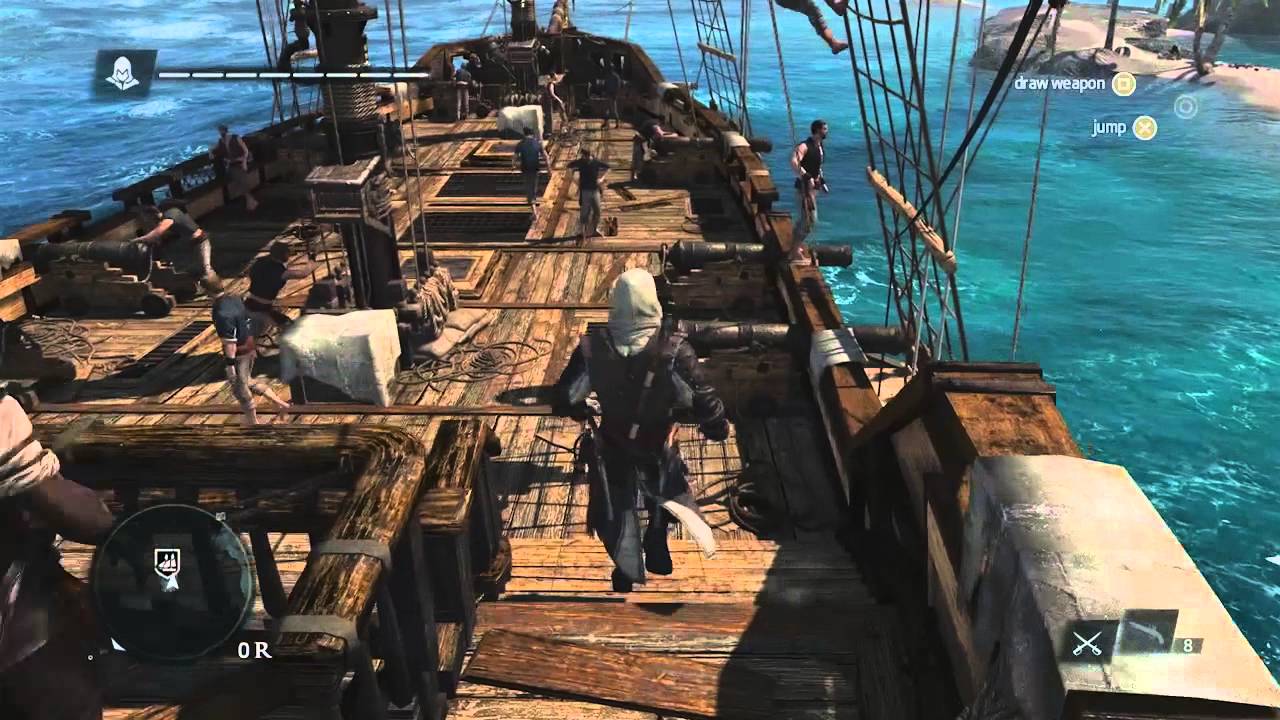 Here is Edward Kenway in his ship where you have to drive the ship, yes you're the captian and you can drive where ever the fuk you want in the wide map.... along with

fishing big fished like Whales and Sharks for R 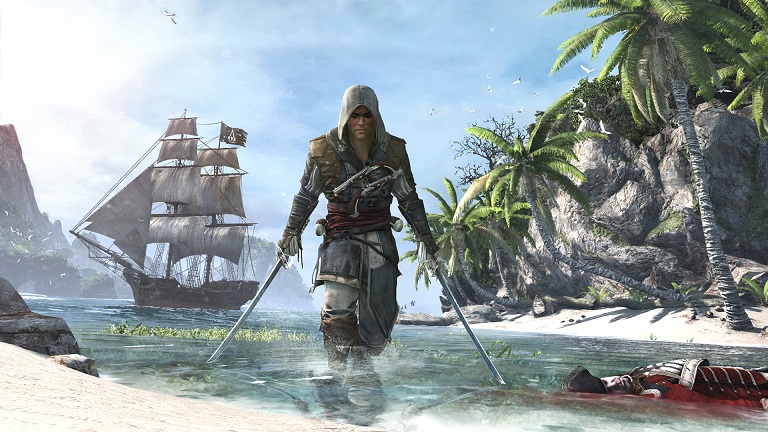 By far the best game that includes pirates of the Sea and Black Beard himself [spoiler] and best combact imo.... Here are some ratings for this game from best reviewers out there,

One of my all time favourite games (Have you seen the yellow sign?)