Some time ago, Valve presents an update for Dota 2 is quite large with some minor changes, especially from the user interface Dota 2 game itself. In addition to changes in appearance, some improvements as well as gameplay changes are also implemented. Starting from buff and nerf some heroes to a new practice mode to make the Dota 2 players getting better at doing last hit creep.

See some changes in the update titled Spring Cleaning , apparently Valve and IceFrog increasingly make Dota 2 is easier to learn. Good for the players who are pro or even likely to be suitable for newbie who just played Dota 2.  This time  Gamebrott will share 5 reasons why  Spring Clean update  in  Dota 2 is suitable for the  newbie.

Gameplay Changelog,  this is one of the important things before we play  Dota 2 when first get  patch update. Every time there is a  patch there will be some gameplay  changes  whether  minor  or  minor . Especially when the map changes from version 7.07 alone there are several versions to date has reached version 7.07d. It's a small thing, but the players  Dota 2 often miss to  read changes changelog. Whether the player is old or  newbie,  seeing the  changelog is very important. You can see heroes who get  nerf  or  buff , see new gameplay mechanisms  , to map changes  as they did before. With the notification feature, for players who have seen the  changelog may be able to recall. Especially for you who just play  Dota 2,  this feature is very helpful because you can see the changes that occur in each  hero. To see the notification, you can see it while doing the  draft  hero  at the top, you just point the mouse cursor  to the hero then the information changes  gameplayrelated  hero  will appear.

Last hit is one very important thing when you play  Dota 2.  Especially if using  hero  carry, mid, offlane even all  hero basically important to can do  last hit. To do  last hit also requires  the right timing when viewing hp creep bar . In this  Spring Cleaning update  ,  Valve  adds a new feature where you can practice to do  last hit. You can try it through the Learn  menu  in Dota 2,  then select  Training, then select  Last Hit Trainer. This last hit  practice  you will be given 3 minutes to do the  last hit as much as possible. After the end of that time, your last hit  stats  will look good from the last number of  hit streaks, denies,  and other information. Very helpful not, especially for you who just started playing  Dota 2.

3. The Emergence of New Icons in Minimap To Demonstrate the Difficulty of Neutral Creep

Neutral Creep, if you are happy to use some  heroes,  like  Legion Commander, Wraith King, Lifestealer  and some  hero  more effective in the woods certainly familiar with some of the  camp where  the spawn of the n eutral creep. Each  camp  basically has its own level of difficulty. Starting from the  neutral creep  is quickly killed to  neutral creep that has a lot of armor and  units . With the presence of this feature, you can look to the  mini map for each  camp in the forest has different icons. The more lines underneath then the  neutral creep that appears  in the place is increasingly difficult to finish off. Conversely, if only a triangle icon without a line underneath then  neutral creep more easily eliminated. How, more simplified and in not the current Dota 2  player  . Create a  newbie  certainly very helpful with the presence of these features. Valve  and  Icefrog  are making new innovations and attracting new players in  Dota 2.

Here it is, a very-very helpful feature for all Dota 2 players  in this universe. Teleport is one  item that should not be empty in your bag. Sometimes we do not know if our teammates bring  tp or not. Or maybe  tp- its moderate  cooldown. We do not know it as long as we do not ask our teammates. With the presence of these features, you just hold the ALT button  then under the icon above the hero will appear cooldown status  of  our teammates tp  friends. For those of you who just play  Dota 2can try these features and certainly very helpful instead. Now to become a pro  player  seems increasingly helped by the presence of features that may be simple but very effective. 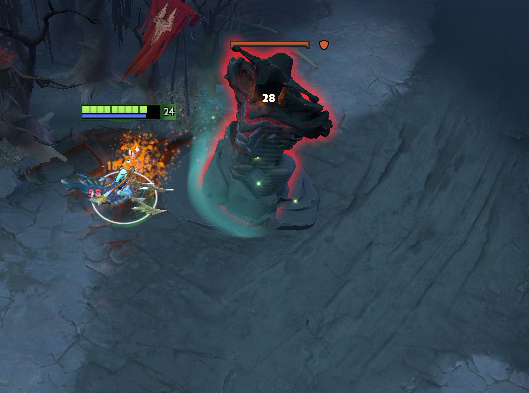 Maybe this is one of the last features that are suitable for the  newbie player Dota 2. Visual tower damage  that is present in the update more easily understood. Especially if you do a  backdoor  or hit the  tower when the distance  creep is still far away. If you do not understand, the tower with the backdoor status  will be difficult to destroy even though the  level  and the  item  that powers. When in the backdoor status of  the tower will show the visual like shield or barrier. So you have to retreat first while waiting for the creep hordes  come before continuing to finish off tower.

How, suitable not for you  newbie  ? now for those of you who just play  Dota 2  more diperjakkan with features that help you in playing games can even increase your ability to become a  pro player to achieve a  high MMR  . Do not forget to keep  positive mental attitude for the community more positive and avoid the  toxic.