Hearthstone is a collectible card game released by Blizzard Entertainment in 2014. The game was originally called Hearthstone: Heroes of Warcraft and, as the name suggests, is set in the universe known from the Warcraft series.

The game allows its players to fight others in the PvP system. However, to be able to start the game, it is necessary to get a basic card deck. Later, you can expand your decks with new interesting collections. There are also plenty of elements to diversify the game. For example, you can collect some alternative characters, such as Medivh, who is an alternative to the basic Mage 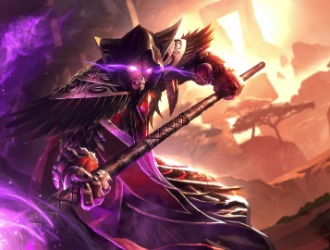 Hearts of many people who know and like the Warcraft universe have been won by an interesting Blizzard release - Hearthstone, formerly called Hearthstone: Heroes of Warcraft. This game is an interactive card game that allows fans of the series to collect cards and clash with opponents online.

Beginners have to equip themselves with a classic or basic deck. With time players will diversify their gameplay with new decks, cardback skins or alternative characters.

At Gamehag, we want to enable you to get a unique Medivh Hero card - an alternative version of the Mage, as well as new cardbacks for your deck. Just exchange your Soul Gems for the gift - Hearthstone: Medivh Hero + Cardback!