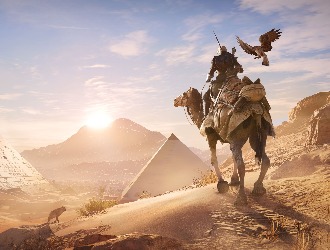 Assassin's Creed: Origins is another version of the popular series, which is also a prequel to the whole series. This time we are moving to the most distant times of ancient Egypt to get to know the beginnings of the Assassin brotherhood. In the course of the game, we learn the details of the intrigue that led to the creation of the organization.

This time we will incarnate in the form of a Nubian warrior, Bayeka. As Greek influence begins to grow in Egypt, we must abandon the old way of behaving and adapt to new realities.

The game world is as big as the one presented in Assassin's Creed IV: Black Flag, we explore the cities, oases and the Nile Delta (on the bottom of the river we find ruins and sunken ships).

What is new in the series is the subordination of the NPC's behavior to individual schedules and times of the day. Side missions, which we get from them, have a much more complex structure and are the driving force of the game.

The fighting system has also changed. Dodging and blocking shield attacks has replaced the scheme of spectacular counterparts, it may be crucial to launch an attack when the opponent leaves the guard and reveals himself to the blow. In addition, attacks were divided into two categories: light and heavy.

The game clearly shows RPG elements, including Character development based on experience and skill tree, or crafting system that allows us to improve weapons (clubs, swords, axes, daggers, bows).

When it comes to technical issues, the new version of the game engine has improved the detail and animation, and the whole game is accompanied by atmospheric music as usual.

Is it possible that Assassin's Creed: Origins is even better than its predecessor? Check it out now by gaining the free key in our store!