Ah! The first article of November! What are we gonna talk about today, you may ask? Well, we are gonna talk about a game which was released during this month! War Thunder is a third-person shooter game made by Gaijin Entertainment on November 1, 2012. That was more than 7 years ago and surprisingly, it's still a pretty active and popular game! In this article, I'm going to explain every little detail about the game and how it's doing currently.

You never heard of War Thunder? Have no fear! This page will help you know a little more info about it: https://gamehag.com/games/war-thunder

Isn't this like your everyday normal tank shooting game?

Quick answer, no. This game is actually pretty unique and you pretty much can do anything you want in it. Do you want to crash your plane into an enemy's tank? Go for it! Do you want to prank your teammate and bump into him, damaging both of your tanks? We got that too! Well ok, maybe you don't want to do that, but like I said before, this game is pretty special since there's something that only this game has that other games don't.

There are three different type of vehicles that you can play as, PLANES, TANKS, AND WARSHIPS!

Yep, you heard me! You get to play three different types of vehicles, planes, tanks, and warships. There are a lot of modes to chose from and most of them allow you to operate two out of the three different types in a single mode. If your having a hard time dealing with a couple of tanks grouping together, you can just send in a bomber and wipe them all out in a single shot or if you want, you can also ram right into them! (Don't do it often though since it will affect the number of respawns that you get...) There are also warships which can also attack other ships with torpedoes and like I said earlier with the tanks, you can also ram right into them with planes once again! (I should stop...)


What can you get before/after battling?

Now, you may be wondering what you can do and get before and after winning or losing. (Yeah, you can lose in this game...) It's very simple actually! Let's say you have been using a tank called the M2A4 for about 30 minutes or so. You can then get research points which you can use to upgrade your tank and become stronger and stronger until your finally bigger and better than all of your friends. (Yeah that means you Joe!) 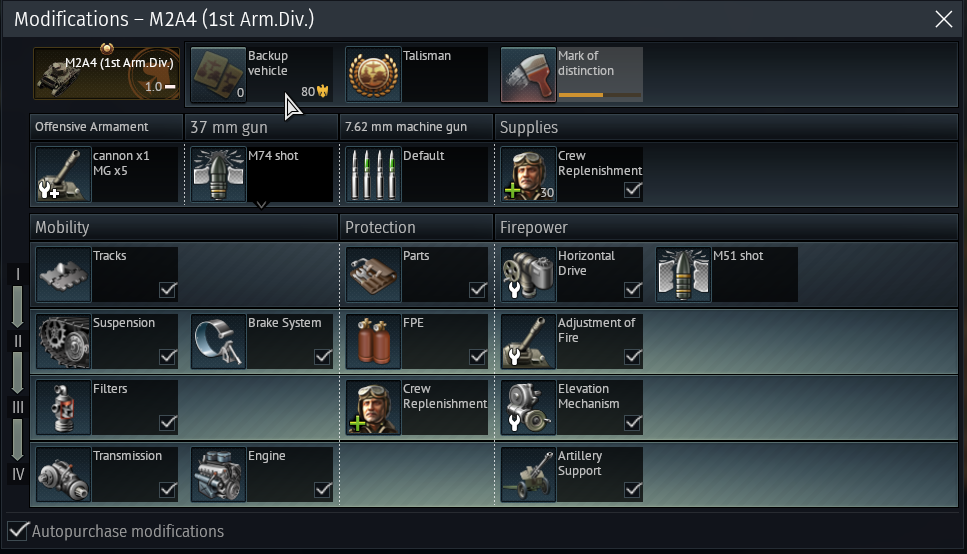 The upgrades/unlockables that you can get on the M2A4

You can also research and get better tanks that are better than your upgraded current one. It might take awhile, but it's worth it in the end! You also can get rewards from playing the game daily. Boosts, free research points, and vehicle skins are just some of the thing you can get. There are two different types of currencies in this game. Silver lions and golden eagles. You can get lions for playing and you can spend them for upgrading your crew in you tank and pretty much everything else that are cosmetics in the game. Golden eagles however are rare, you can get only about 300 or so in the game without spending money and I suggest you only use them for tanks you really want. DON'T use them to finish your upgrades! I learned the hard way when I got these eagles...

What fun modes are there in the game?

There are a lot of modes in this game and I mean A LOT! Most of them are defending or attacking bases or destroy tanks which is a pretty fun thing to do if you ask me. There's also another mode called Realistic Battles where everything you do is realistic and you can lose fuel, ammo, or explode without any warning! Tournaments, wars and events are also another thing where you can get a lot of prizes from being the top notch tank, plane, or warship! 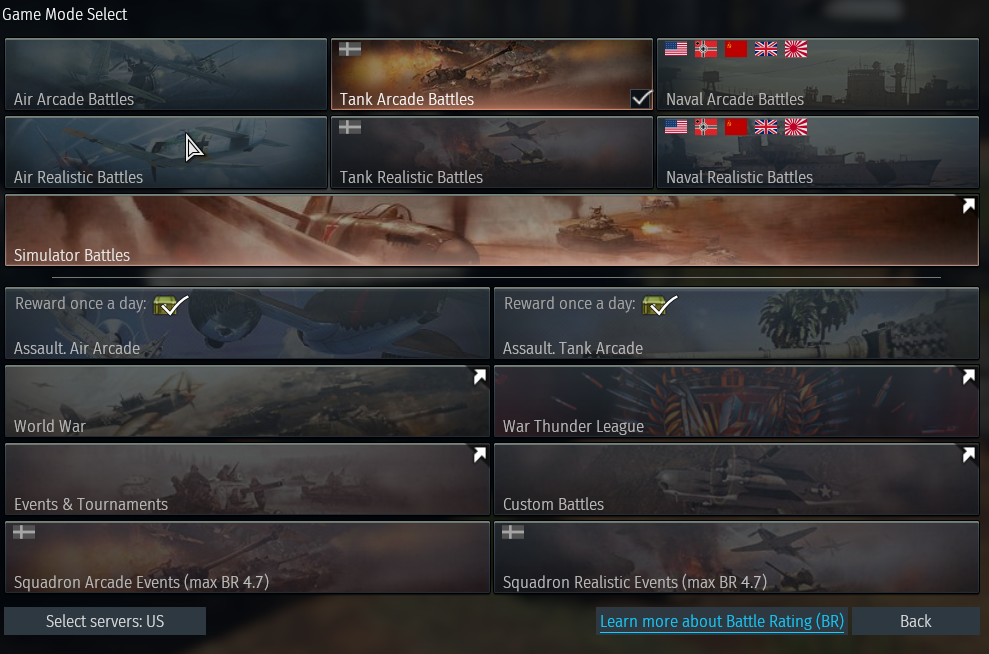 Some of the modes that you can play currently on War Thunder!

Can we see some EPIC gameplay of this game now?

Ok ok, here's a screenshot that I took while playing the game: 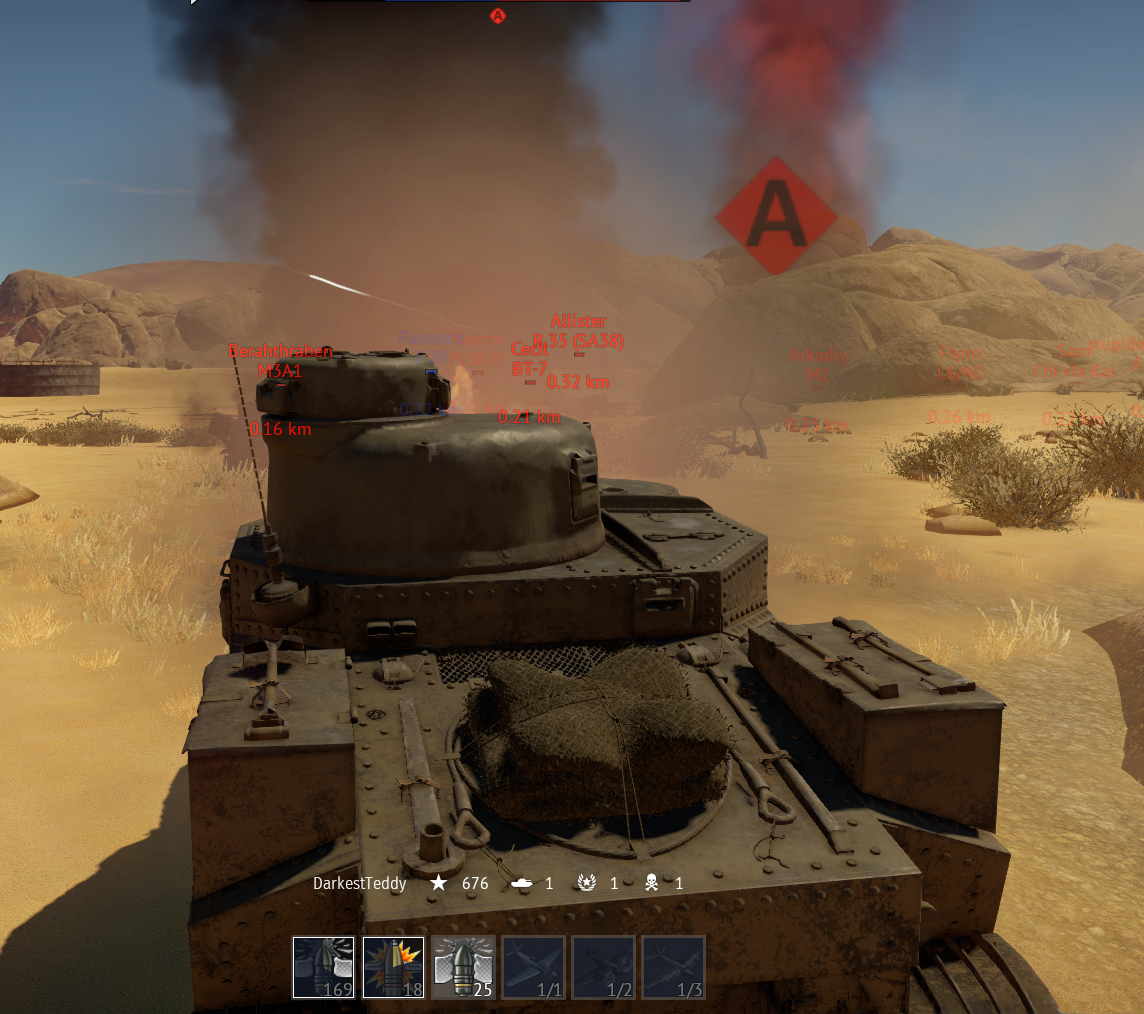 Some epic shots I took while playing a tank that shoots 3 cannons... (Rank II)

Cool! Where and how do I play this game?
It's available on PS4, Xbox, and PC, so you can download it right now on the computer that your reading this article on for free!
(Or a gaming console if that's your thing...) You don't have to get it but I suggest giving it a try before actually judging it since it's very fun!

This is my FIRST ARTICLE and I hope you enjoy it! Please rate honestly so I will know how I'm doing currently!
Happy gaming!

a game based on war strategy and as many planes and what there may be in it, a war formed long ago, you have to play it, by the way good article.

I played this game before, and the description fits perfectly!

Thats why WAR THUNDER is my favorite GAME !

The first highlight of War Thunder comes from the beautiful and eye-catching graphics. The design of the context is done quite a bit, thoroughly making players feel like they are experiencing the game in a real world.

the game is honestly fun