Rate this article "The Forest - Review"

The Forest is a horror survival game, the open alpha was released on the 30th of May, in 2014, developed by Endnight Games. This game is still in alpha, and it updates a lot. It's currently in Alpha 0.72b, and the game hasn't died during the making yet. It's actually what I'm currently aiming for with Gamehag, 2 copies of The Forest. I appreciate help like suggestions for games I could learn and review fast, but I'm not begging anyone to do anything here.

Just like most things, in The Forest, you need food and water to stay alive. The easiest way to get both is opening suitcases at the crash site, you can find snacks, soda and booze there. However, a more effective way is to hunt animals and to set up water collectors. They restore much more.

The crafting system is very simple, and somewhat unique. You right click items in the inventory to combine them with other items. The survival guide has some basic combinations, like molotovs and makeshift bombs and bows.

Animals fight you too, but only crocodiles and sharks. Cannibals and mutants are your main enemy. The most effective way to take them out is to burn them with molotovs or flaming arrows, resulting in them staggering, making them vulnerable to attacks and losing most of their health. Mutants however, tank a lot more, and explosives may be a good option too. If you don't have molotovs, you can wrap cloth around your axe and ignite it. Pretty badass, huh?

Building is mandatory, as it allows you to save the game in shelters, and to build bases. With that, you can easily build effigies, to scare away cannibals, using severed limbs from your defeated foes. The most dangerous thing are mutants, they can effortlessly destroy walls. The longer you survive, the more often they come, and the stronger you get. However, I believe there has to be a certain limit.

Caves are a very intriguing part of the game, as they are very dark, but contain special items, like the climbing axe or the katana. Mutants naturally spawn in them, however, the enemy placement isn't randomized.

There are many stats in the game, but their effects are currently not implemented. 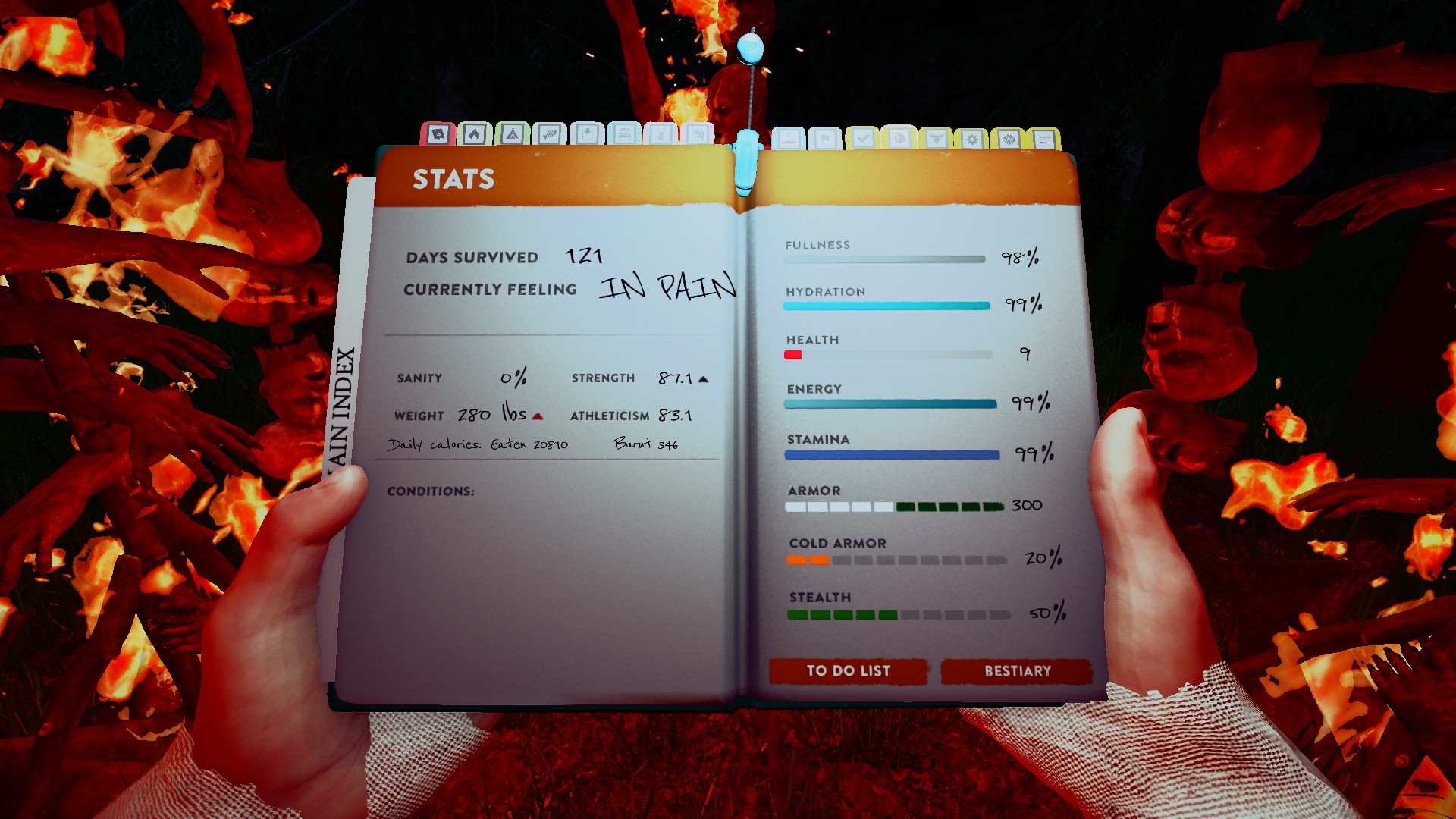 There's currently 4 types of armor in the game: lizard skin, camo, deer skin and bones.
Lizard skin is basic armor you cna get by skinning lizard.
Camo is the same as lizard skin, but with leaves attached to it, adding an additional stealth effect. If you have a full set of it, you are nearly invisible while crouching.
Deer skin is weak, but it protects you from cold.
Bones are combat-oriented too, but their meter fills more with each piece, and it is way stronger. However, you cannot disguise yourself with it.

Axes in particular can be customized to your own liking. The most balanced axe by default is the modern axe, but you can use tree sap with feathers to inrease speed and teeth to increase damage. However, you have to find your own balance between those two stats, as they change each other.

The soundtrack has a lot of rock, and the majority of it is on cassettes found in landmark locatios.

The game runs on the Unity Engine and was released in the middle of 2014, and I think it still looks pretty damn good today. (This "trailer is unofficial.)

Rate this article The Forest - Review

Although its main plot is somewhat short, it enjoys its wide gameplay and everything that can now be done in the company of friends, something that makes it very fun.

The Forest is the best survival game

The Forest is actually one of my favorite games :D

you can get this game here?