Rate this article "Runeyana: Exploring the world of a broken game"

Runeyana: Exploring the world of a broken game

A very promising game with high hopes left in broken ruins. Runeyana is a somewhat singleplayer game, with some sort of multiplayer interaction. Take a look at what this game is and where it all went wrong.

Runeyana is a hack and slash RPG, which plays in the world of Alteos, inhabited by different races. Embark on quests, kill monsters to level up and collect loot which you can use to craft new gear. You can explore a colorful world on foot, on wings and underwater, or on the back of a mount. There are ways to trade your stuff with other players, as well as the ability to steal their gold and take over their castles. As fun as it may sound, the game was developed by one person, and no longer seems to be working on it, leaving this game with tons of bugs and unbalanced gameplay. 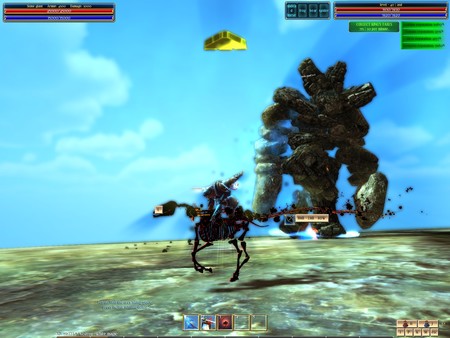 Moving around in the game is a nuisance already. Moving forward, you'll move forward, but moving forward and left is not gonna happen. You won't start walking diagonally, you'll walk in the direction of the button you pressed last. Then there's jumping. When moving forward during a jump, you will stop moving forward when you reach the highest point of your jump and slowly descend straight down to the ground. Later in the tutorial, you will get the ability to fly. First of all, it's not flying, it's gliding. When you talk about flying, you talk about the ability to fly upwards, stay in the air and descend at will. This game however only allows you to stay in the air and move, but you can't go up and to get lower, you need to stop gliding. What's more annoying, is that when you stop gliding, you will, again, drop straight down and you won't be able to glide again until you jump again. To top it off, every few seconds, the glide needs to refresh, so you'll make a jumping animation before going back into glide mode. And if the keybindings aren't to your liking, you'll have to quit the game first and set them in the launcher.

Next up, are the monsters. It's understandable that many monsters are out of your league and hitting them doesn't do any damage at all. But to find these monsters in the tutorial, that is a real pain. The first monster you will probably encounter, is a wolf. These wolves hardly do any damage to you and you should have no problem killing them. A little further, you will find goblins attacking a bear. Being the noble hero that you are (or the typical RPG lover who loves to level up faster), you decide to help kill the bear. However, you will deal no damage at all, and the bear will kill you in a few attacks. The level gap is suddenly increased by alot, yet it's level is very low. You are supposed to get better equipment, yes, but to have creatures that strong already. Even the nearby deers can't be harmed yet. Monsters also won't respawn, unless you walk away far enough, and it's not a few footsteps away, it's at least a five minute run for them to spawn and back. Luckily you can use teleport scrolls to cover that distance, but in the tutorial it would most likely not be enough. Another way is to, again, restart the game. 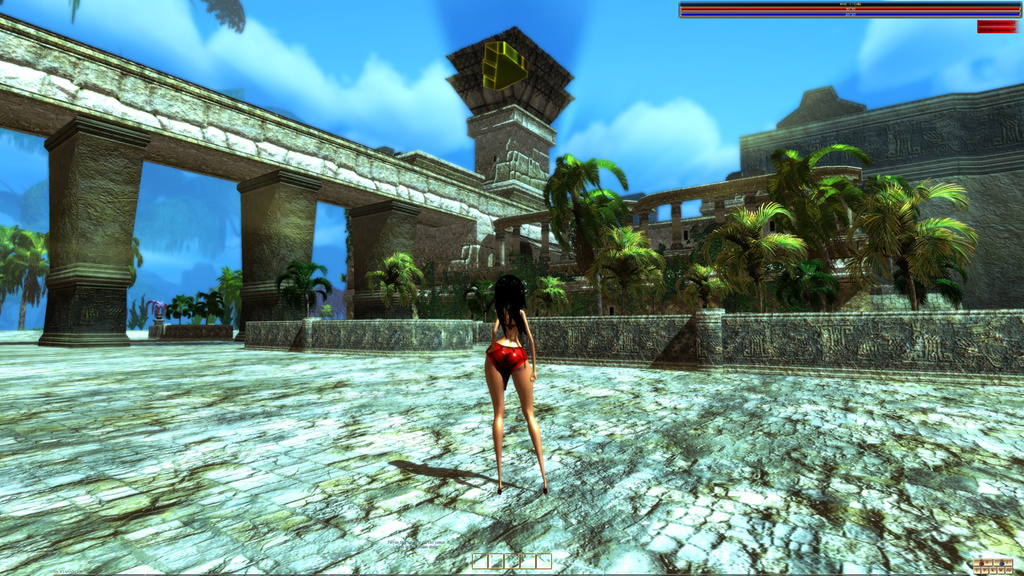 There are many more moments like this in the game, like the (semi-)bosses. After the tutorial, you'll be asked to talk to a few guys before the next actual quest is given. Now you have to collect a diagram, which you must use to craft a magic weapon. However, the chest it is in, is being guarded by a troll. Even with gear crafted from monsters you'll only find after this and further quests, this troll will still kill you with 2 hits in 1 second when you get too close. The melee weapon also hardly deals any damage. You could try to run from the troll, like the quest giver suggested, but then you still need to loot the diagram, and looting takes too long. When you are halfway of looting the chest, the troll is already back to beat you up. And you can't go too far away from him, if you intend to lure him away, because when the distance is long enough, the troll will just dissappear and respawn. After telling the developer about this he responded as follows:

"Some mobs aren't immune to different weapons... That's the point of this adventure...

In other words, this would mean

"You have no skills, get good"

, which would be a fair answer, if there wasn't a loophole. You could just craft a powerful bow, train with it until you can charge your shots, and then all you have to, is climb to a higher ground, charge your arrow and kill the troll with only a few charged shots. You could even take off all your armor and sell your bone weapon, as every enemy can be defeated this way, safe from magic and ranged opponents, which hardly seem to exist in this game. So in order to go far in this game, all you need to do, is focus on upgrading your bow. If you got leftover scraps, feel free to craft armor from it or a melee weapon, but as long as you can get to a higher position, and the monster's armor isn't too high, the bow is all you'll ever need.

Basically, fighting bosses close-by is hardly possible, and fighting with the bow turns the bosses into a fight a 3 year old kid can win.

Let's talk about the multiplayer aspect of this game. You will never see other players, but there are three things you can do that other players playing this game will see on their end: 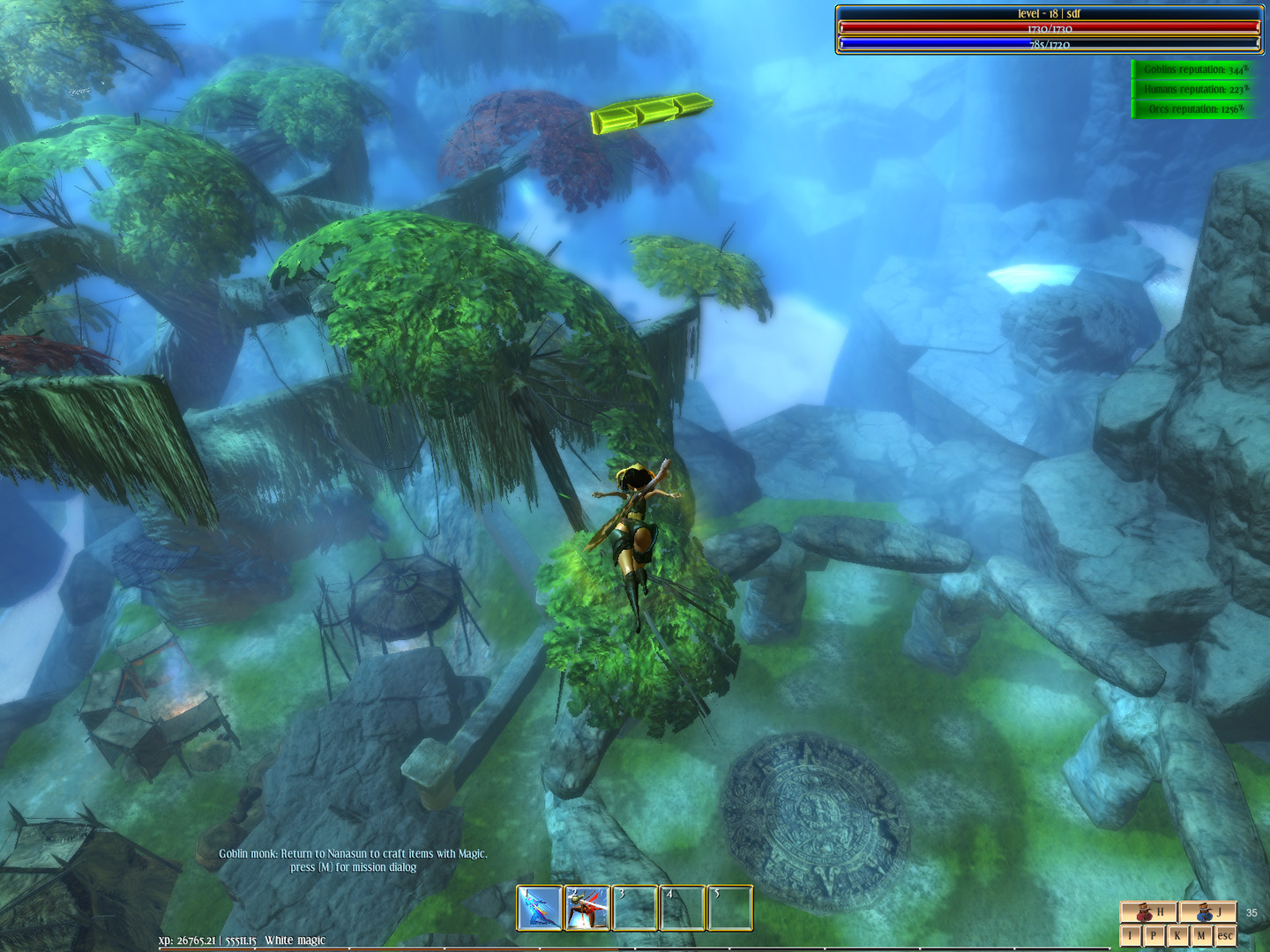 The chest works like a bank. You can only carry a limited amount of money with you. However, if want to buy a market stall or a palace, you'll need more than you can carry. Unlike other games that provide you a safe bank, you have to spawn a chest and put your money in there. Doing so, that chest will appear for every other player on this game, and they'll be able to loot it. You can move your chest as often as you want to prevent people from stealing it, and this may sound like a nice and original idea, but what's really unbalanced, is that your chest will appear on the map. What is expected to be a difficult hunt for easter eggs, has turned into a simple treasure hunt with X marking the spot. Even the loot is bad, because if the chest contains more than you can carry, you'll only collect what you can hold and everything else will dissappear. Found a chest with 18 million gold? Good, but your limit is only 5400 gold, so we'll fill your pockets and throw everything away. Not only do you miss out on a great find, but the owner of the chest also lost all that money. But why would save so much money anyway? Only a market stall and palaces with guards are the only things you would have to save for.

The market has many stalls, but more than 99% is empty. Supposedly, if someone rents a stall for 10000 gold, you would be able to see it and buy stuff from that player. But with the amount of people playing, don't expect to make a profit. There also isn't much you can sell, other than materials of a high level, but either players can farm it themselves or, most likely, they've just started playing and can't afford it. There are hardly any rare items in this game, so renting a stall on the market is a waste of time and gold.

A palace is a place you must defend, and whoever owns the most palaces, becomes the king of Alteos, who will then earn gold for every palace he or she owns. A palace can be bought for 100000 gold and guards can be hired to protect it from players, who will try to take it over. But other than the competition and Steam achievement, there's no need to get involved with this. Gold is practically useless, and you'll take over palaces only to have them taken away from you again eventually. Don't save gold for this, just level up, upgrade gear, kill all the guards and you got yourself a palace.

This game had a lot of potential, but didn't receive the love and dedication from it deserved. Runeyana does have some good things, but those aren't enough to ignore everything that is wrong with it. On top of that, the game is available on Steam as fully released for $8,99 since 21st March, 2017. Every fully released game will surely have one or two bugs, or even more, so then it's up to the developer to fix those issues. But when asked to Runeyana's sole developer what he is still working on, he only stated that he will work on Runeyana in the future, though couldn't say when, as he is currently working on another game. In the eyes of the player, that means the game will remain broken for a long time.

If this game was released a decade ago, it might have been a decent game. For this time, you're better off finding a free to play MMORPG. Runeyana is like a Siren: It deceives you with beauty and wonderful sounds. The game developer was nice enough to publish a demo of the game, though. So if you're uncertain of whether this review is exagerating a bit too much or not, you could play the tutorial for free. Then you will see how bad Runeyana is being taken care off.

Rate this article Runeyana: Exploring the world of a broken game