The game The first Darkness One of the most beautiful games of correction from the first perspective in our generation and the most characterized this game its dark and bloody and violent and made a lot of fierce ideas in killing and cutting any human creature in front of you using your dark properties or know the ability of Darkness that darkness Who lives inside our hero Jackie Estacado, who enters dark mazes against the Mafia in New York City to face the darkest consequences of the death of his lover Jenny Ramano and begin a bloody revenge against the Mafia until one of them kills after the help of that monster buried inside,Jackie is a leader of the Mafia and the Darkness of Darkness went into a deep sleep waiting for that moment when she woke up to satisfy her wishes for murder and blood. 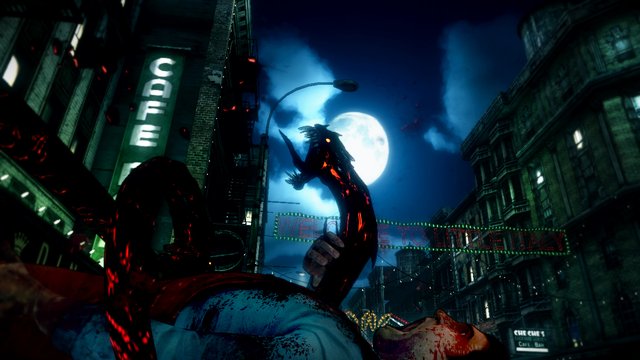 After two years of the first part, Jackie Estadado became the head of the Italian Franchhetti family in New York City, Jackie still suffers from some hallucinations and the vision of his lover Jenny, who died in the first part, Jackie was attacked during his presence in one Restaurants by an unknown group in an attempt to assassinate him and during this attack wake up the monster who lives inside the body of our hero Jackie Yes it is the power of darkness Darkness come back to satisfy its violent bloody desire, you will discover many of the secrets of the power of this terrible darkness and why can not Jackie get rid of them and what Cause of hallucinations that afflict a duck Na and his girlfriend Jenny lung, events Stjervk quickly because of the short life of the process of the main story, which is one of the major flaws in the game. 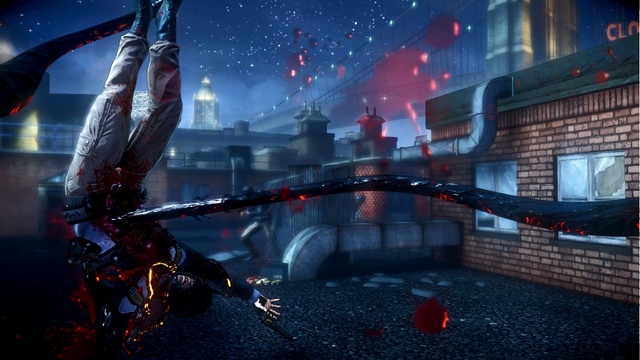 If you do not play the first part, you will recognize  Darkness abilities. You can use the party on the right of the darkness as a whip to hit and cut enemies in different directions by analog. You can hit the enemy up and then hit down to make the strike stronger or hit from left to right to cut the enemy In two halves, the other side of the darkness will be used to perform the various terrifying bloody enemies. You can use the execution for your energy or to create a shield by choosing the execution type you want. There are other abilities for darkness that can be opened by purchasing from the Amak tree You can unlock various capabilities such as Black Hole, a black hole that pulls enemies into them and rips them to shreds. You can also develop special abilities for firearms that you have to increase the ammunition and others. In order to buy, you must have something in return. The Darkness 2 When you kill enemies you will get points and the more different ways to kill you will get more points and points you can buy 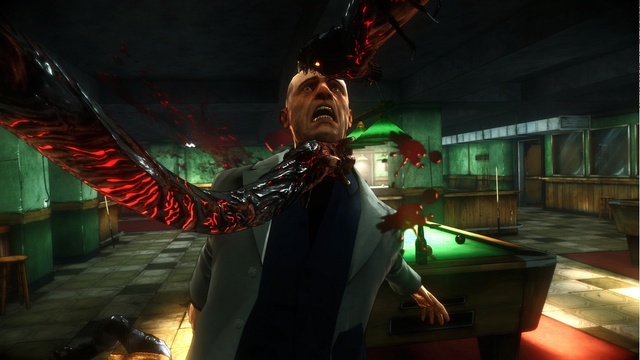 The abilities of darkness are the main advantages of the game of course, the bloody and violent to result from your dark abilities very fun and ways to kill and tear the enemies to pieces very wonderful and improved from the previous part stages, the impact of strikes become more realistic and flexible than before you will notice how the body of the enemy torn You can use some of the things in the areas to be a weapon for you like the pipes that you will throw at the enemy to enter his body and make it from the place where you cut it exactly and the most bloody thing in the game is to tear the enemy's heart and eat it to increase your energy or pull the spine to increase your dark abilities. Malaga in the Wall My fans behind him, and also that you cut off the enemy's super-fast! , Which improved in the second part is  Shooting is more smooth and easy, especially when carrying two weapons at the same time when you shoot, Jackie will inadvertently increase the accuracy of the correction to the middle to become easier and better, there are many types of firearms, There is more than one type of ordinary pistol and machine guns and heavy guns with different effects of each weapon from the other, but the game lacks explosive grenades, hand and any other explosive weapon and I think this is better suited to the ambiguous atmosphere of the mysterious game.

The development team brilliantly refined the dark capabilities and their impact and the reactions of the enemies towards it and the modification and improvement on the correction system to become smoother and more beautiful than before, but there is some dark abilities lost by the second part is the launch of one of the parties of darkness and moving camera photography of this party And control it, but in return the studio compensate the players for this ability to add a creature assistant you can control in certain places of the game and will support you during your bloody career. 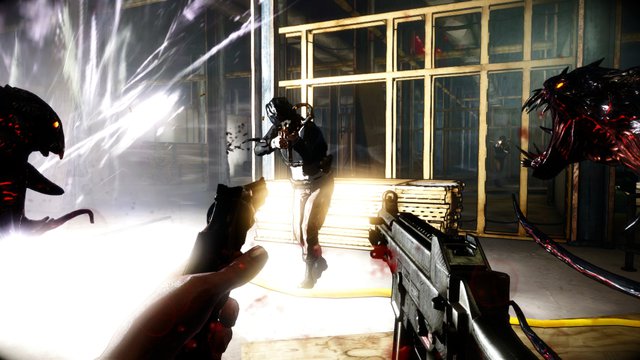 Scenario of the story:
9/10 Scenario very distinctive known semi-partial difference on the last part with more excitement and suspense

Play ):
8/10 C Game Play has known tremendous developments in all its aspects

Graphic:
5.5 / 10 Graphic is acceptable to the sub-good known developments characteristic but remains unrealistic

Sounds:
9/10 The game sounds distinctly distinct and worthy of the mark more than this

General point:
8 distinctive game characterized in the strength of their voices and the difficulty of artificial intelligence with some defects in the graphic