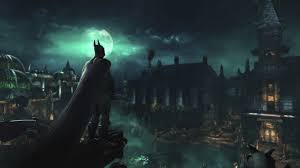 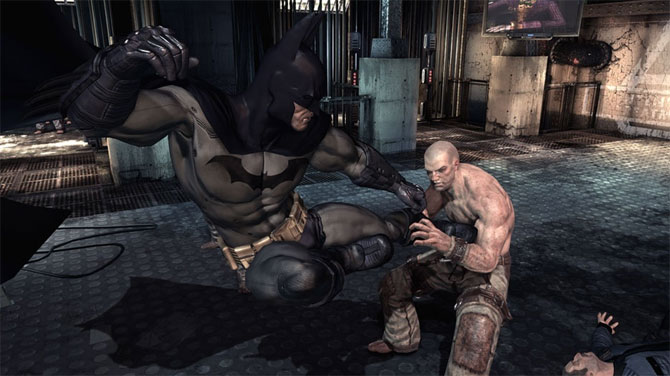 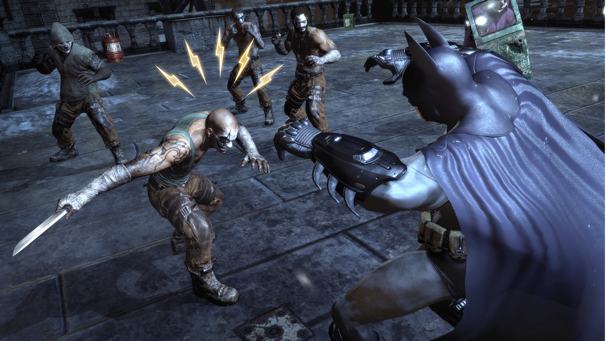 This is a part of the game. Another phase of the game is the more fun part of the game. It is also a different and separate stage from the main story, the Chalenge Mode, a group of challenges in small rooms and squares. You can play in a certain time to win the prizes, you can play the main character "Batman" As an exclusive addition to the PS3 version of the game will be able to play the character "Joker" with a set of exclusive maps, what distinguishes this stage is the sense of the real challenge while going into one of his duties , Some tasks require you to eliminate a number of enemies and get a p I have 17000 points of experience but in a very short time, and you will not get that big amount of points until after a long series of combat attacks, it's a really exciting phase. I've sat for long hours in order to get the bronze medal for this challenge, Not all challenges will be combat, but most of them will be challenges of espionage and insensitivity. In short, this phase adds an excellent challenge element to the game and will lead to a longer and more enjoyable game. If you try this phase, the game is generally great and a powerful experience you do not have to miss. , But now let's talk about some of the negatives that I've noticed in this game The fact that the game is a kind of repetition, despite the vast space of the game, but you will feel that most of the tasks you have done in advance, as well as leaders in the game may not differ their strategies when interviewed in different battles, such as the "Titans," who will meet them for more Once again, I have seen no change in their strategies and attacks. Another point I consider a negative figure in the game is the heavy and very slow Batman movement. Sometimes you will get bored because you will have to press a button for "jogging", so you will feel that the game is often Especially tedious with Batman's slow motion and accompanying music tedious metabolism ! , Another point is the absence of multi-player and online games where the challenge could be taken advantage of and added to the ability to play across the network, but there are potential additions, especially with the availability of a new additions, which will probably carry a lot of updates and additions in the future. I can say now that I have come to the end of talking about the style of play and I can say that the game in general is considered strong and provided a style of play with exciting content and interesting, but the game is the best game in the level of games quoted from the storyboards so far, if you love games Action and Adventure, then know that this game is a "chance" you should not miss " 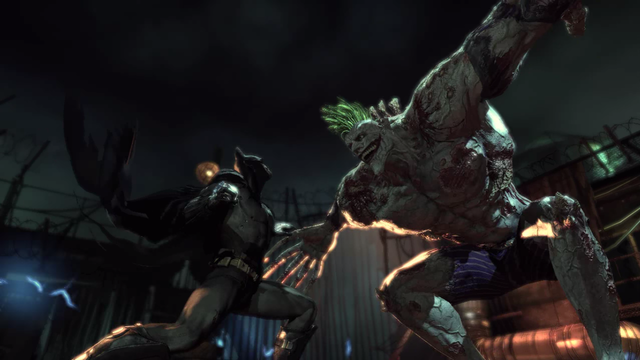 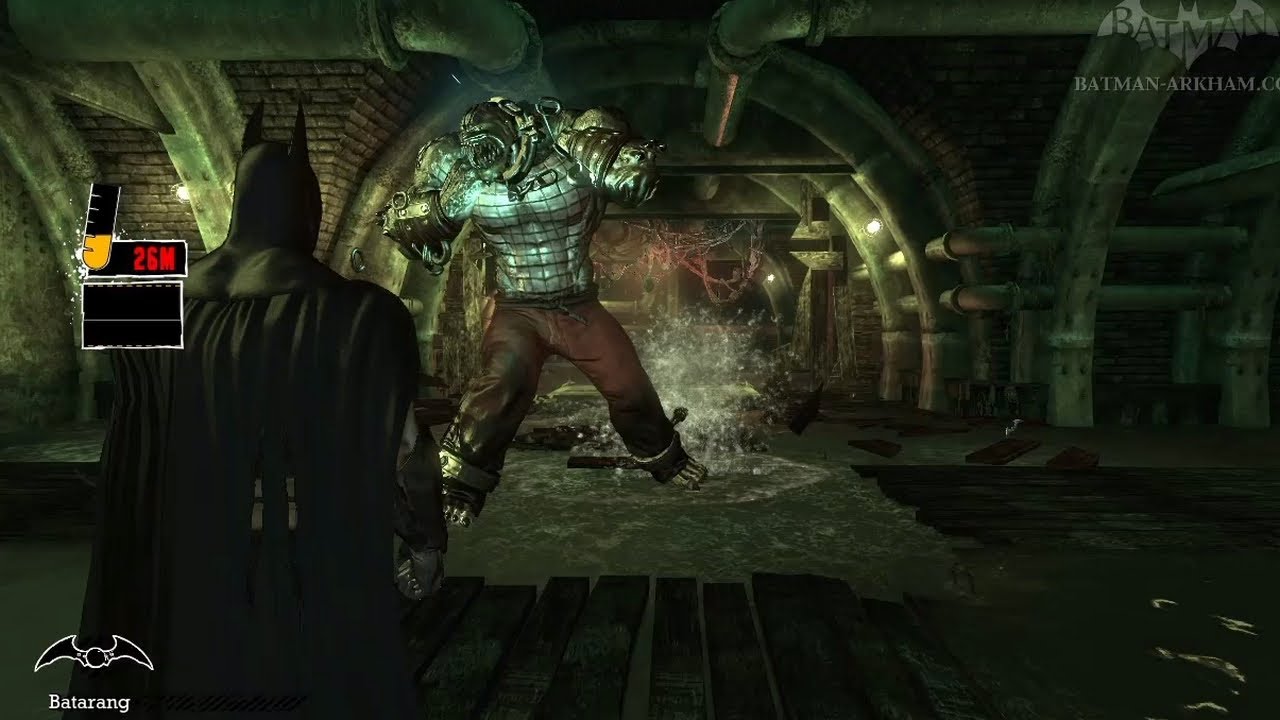 The engine used in the development of this game is the famous engine "Unreal", and this name is familiar in the world of games, how not it is used in one of the most powerful games of this generation in visual terms, "Gears Of War", we can summarize talk about the appearance of the game General The game environment has been really great, the environment of the game is fantastic, interactive and close to reality, despite the appearance of fog in most areas, but in general the game environment looks pretty good. The characters in the game will be talking about, the characters are already considered the best that has been "visually" done in the game, everything in the character seems so realistic to a great extent that the characterization of the characters and their artificial muscles appear more than excellent in the game, thanks to the engine Unreal with terrible visual abilities that appeared in this game. If we were to talk about secondary elements such as lighting and water bodies, the other works were really innovative. Let's talk about another technical aspect, the output and the angles of photography in the game, the output in the game is good but do not expect much is a game from the developer of "Western" and hardly find a Western game has a creative touch in the output compared to the Japanese developer, and what makes matters worse is the weak animation of the characters In most scenes of the game you will notice that the movements of the character are normal and limited and full of fabrication, but this never diminishes the aesthetics of the game, the angle of photography from my point of view may not be very cooperative with you while roaming and exploring and infiltration unlike the fighting, the angle of photography appear behind Batman Directly, he notices that "BatMan "screen a large part of the screen while roaming, and you will feel that the camera - sometimes - stuck behind" Batman ", which may hinder you to see the surrounding area easily, but in general, you can get used to the camera system and its cooperation with the control of the game in a very short time . 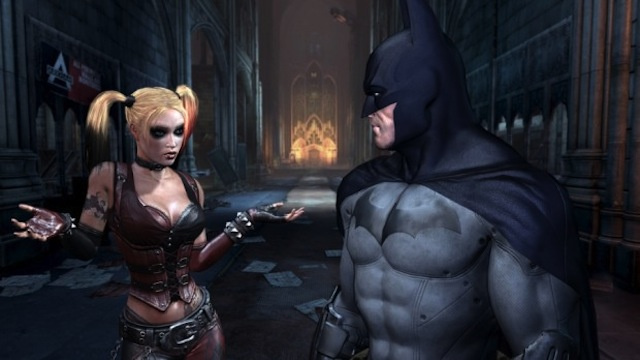 The sound effects in the game are great, the sounds of kicks, jumps, friction and lighting are all close to reality and work on them more than wonderful, you will certainly like the sound of the punches paid by "Batman" to his enemies that will make you feel a desire to pay several more punches, Some of the mistakes are in the form of the sound of the voice sometimes and the repetition of some words by some characters during the game, what adds flavor is the voice of "Joker" and his laugh sarcastic cynicism, which I personally consider the best sound performance in the game so far, the music in the game is mostly calm, nothing special - J Music Beats game, what you hear from is just an ordinary Beats music Stnsaha once the game termination from, unlike some of the other games that have great make them stuck in Beats mind for a long time.

- l The pros and cons of the game l -
+ The style of playing solid, and excellent displacement between the action and infiltration
+ There are a lot of tools, developments, secrets, secrets, which you will find in the game
+ Extra phases increase the fun rate and increase the game life, such as the "Chalenge Mode"
+ Excellent combat skills, beautiful Hollywood style in combat with innovative rebound and rebound property
+ A good story, with a wonderful introduction and narrative
+ Graphics are amazing and realistic to a great extent,


- Game System -
It is a wonderful mixture between action and infiltration with new ideas and methods of playing a variety will inevitably get your admiration, add to the amount of fun you will get through some minor additions in it, what is wrong is artificial stupidity and little repetition in the tasks of the game (8.5)

Thanks to the incredible Unreal engine, this Batman game was presented in the most beautiful suit (9,0)

The game was quoted more beautifully than the story, with the unique narrative style that made the game a unique attraction (9,0)

The sound effects were worked wonderfully, the sound of "Joker" gave the game a special flavor, but the game's "forgetfulness", adding to the poor sound - sometimes - (8.5)

With an excellent storyline, and additional stages like the challenge, Batman will keep you busy for really long hours (9,0)

I like how you narrate the game in a essay form. Good one, and definitely can improve. Kinda lengthy in my opinion. Try to put straight points & learn HTML formatting for images.