The first The Black Mirror , released in 2003 by the Czech studio Future Games , is rightly considered a classic among all fans of adventure subspecies point-n-click.

Her sequel, and then the third part already from Cranberry Productions and could not outdo the original, but they at least turned out to play on the nostalgia of dedicated fans. Almost the same atmosphere of desolation and despondency in the English village called Willow Creek and in its surroundings still attracted attention, and the Gothic castle of the Black Mirror attracted carefully concealed and unsolved secrets.
And now, after almost seven years, there was a rethinking of a series of gloomy quests, for which this time the German King Art Games answered . 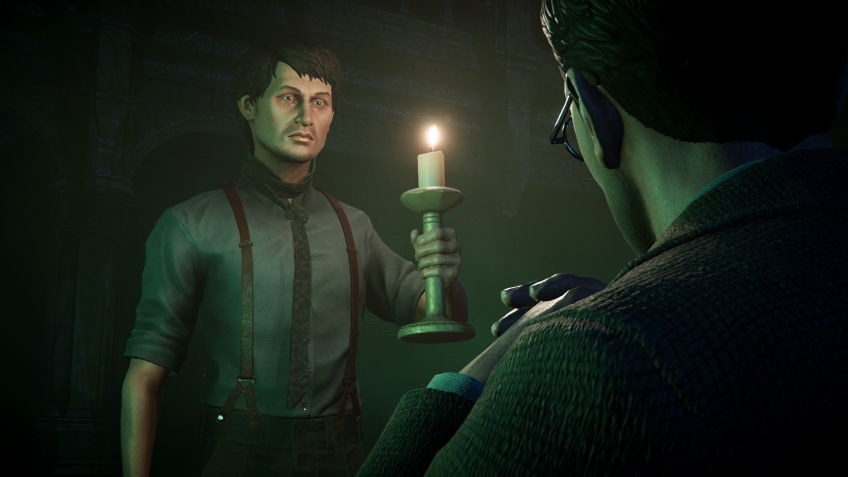 Another one of the Gordon family

Scotland, the first half of the XX century. David Gordon, the wealthy heir of a noble family and simply gallant gentleman, comes to his ancestral estate shortly after he learns of his father's death.
There he is met ... not too friendly. Residents of the castle understand that the hero came strictly in the case, and therefore, and there is nothing to stand on ceremony with him. Everyone constantly hints at us that he is not yet the owner of the estate, but only the son of the deceased owner. But alas, we will not be given time to earn the confidence of inhospitable inhabitants, because the game takes place in about five to six hours.
A short duration of the gameplay affects the story component of Black Mirror . The new game carries in itself the same idea as the original, but completely devoid of all those elements of immersion, thanks to which the previous series was remembered. Yes, here too there is a castle and a kind of surrounding land, which you can freely move around, but this does not save you from the intimacy of what is happening. In other words, it is played and felt all this as one big episode of the season with three of the same.

However, the gloomy Gothic atmosphere in the spirit of Lovecraft redeems many shortcomings. The environment is well-worked and indeed good: the play of light and shadow softens all small roughness. But the characters leave much to be desired. The faces are made of wax, the twisted animation of facial expressions and gestures does not allow believing what is happening on the screen ...

As for the quest part, then everything is rather restrained. There are several similar puzzles related to the physics of objects, and other kinds of puzzles. However, they all do not really require brains.
The chip with the protagonist's visions promoted during any advertising campaign , alas, also disappoints. Their meaning, in fact, is to convey the events of the past. Interaction with visions occurs by clicking on the sparkling area, that's all. There is no need to restore the order of the incident, as, for example, in The Vanishing of Ethan Carter .
The very same story in the game does not hold out to the one that was told in the original trilogy. The scene of action this time chose Scotland instead of England, and an earlier period. The fashion for arranging the interiors is different, but, in essence, this did not really change anything, because the castle is also a castle in Africa.
Lady Margaret is the same Victoria from the last series, a stiff old nobleman from whom words can not be stretched. But the butler Mr. McKinnon replaces Bates himself, who, thanks to his well-written character, wipes his imitator's nose for a time or two.
However, all this can be attributed to the personal perception of the work, but countless technical problems overshadow the acquaintance with the Black Mirror ...

First of all, the system of interaction between the character and the objects of the situation evokes censure. The management is sharpened more likely under a gamepad, rather than under the keyboard and the mouse that complicates business. Open spaces are no longer "cursed" by the cursor, as before, but they are forced to study things in inventory in the most detailed manner. In this physics, to which much is subordinated here, obviously paid too little attention in the "polishing" of the game.


The simplest example: when characters need to reach out to some object, they do not just come close to it, but as if "crawl", moving in a not quite normal way. Glitch or a flaw in the physical model? Be that as it may, the transition to a full-fledged 3D is by no means the key problem of the game, but the bad optimization is still like!
The protagonist is extremely slow: slowly walks, slowly runs, and circles, and at all with the speed of the braked snail. A similar problem was observed in Syberia 3 , where it was common to accidentally turn off in the wrong location.
In addition, Black Mirror suffers from an overabundance of QTE and somehow worked out system of selecting replicas in dialogs. All this is done not entirely successfully and not completely to the place, rather - simply "for a tick", because no "He will remember this" for the decisions made should not be.
Finally, the load screens are annoying. Some locations in the game, even though they are spacious, are separated from others by a long black screen before their eyes. Annoying pauses happen even between the cut scenes.

The original The Black Mirror slowly plunged into its eerie world. Events developed slowly, and a large number of extraordinary locations convinced us that the authors thoroughly approached the story they invented. And so it was. The old parts had a clear composition. The new one clearly does not know which side to approach to this. She quickly passes and just as quickly forgotten.